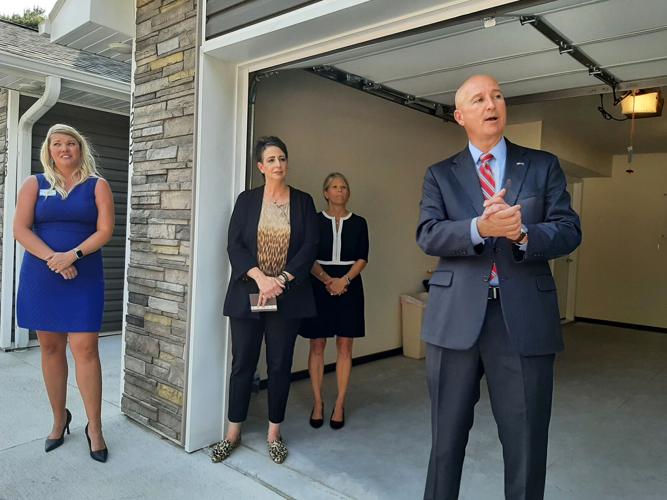 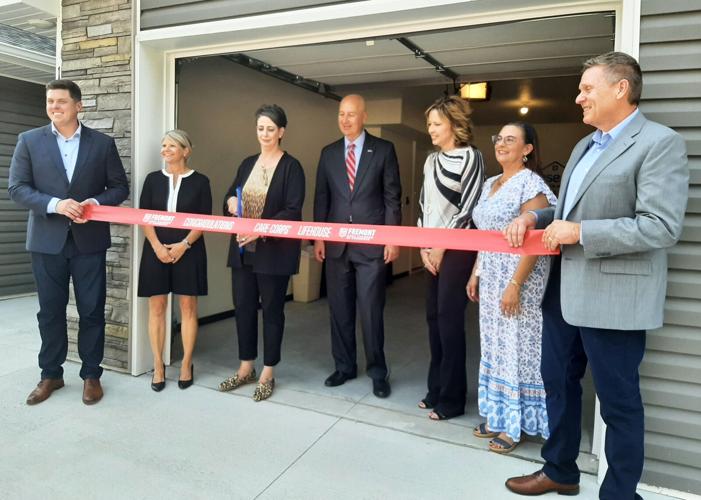 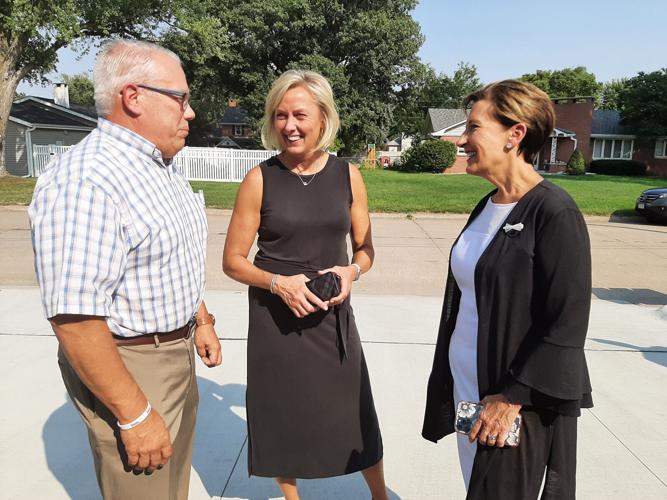 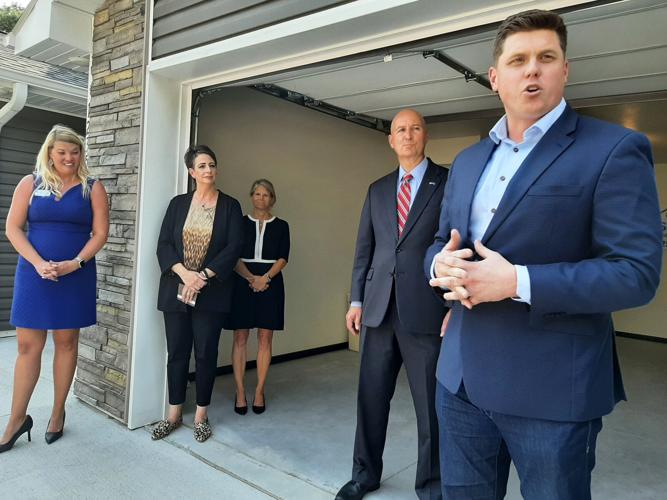 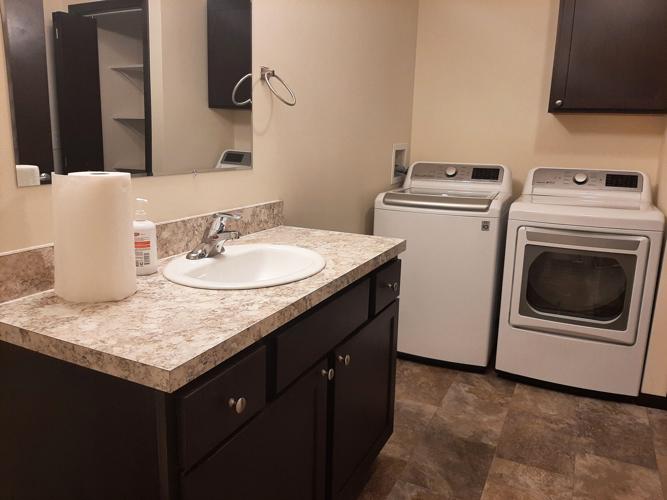 This is a bathroom in one of the new Care Corps' LifeHouse units in Fremont. 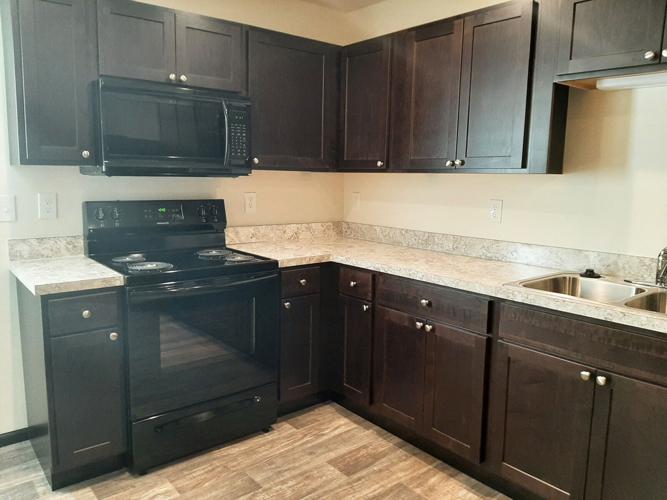 Light shines into the kitchen in one of the new Care Corps' LifeHouse units in Fremont. 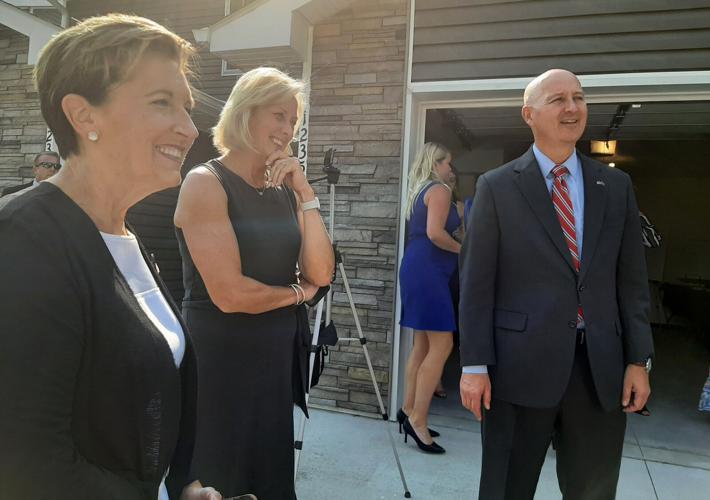 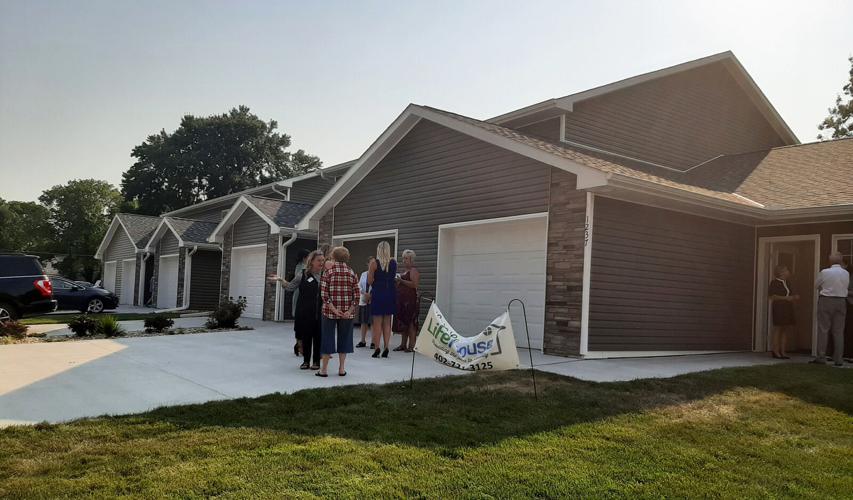 Guest stand outside new Care Corp's LifeHouse units after a ribbon cutting on Thursday in Fremont.

Despite a flood and worldwide pandemic, Tera Kucera stood at the fulfilment of a dream on Thursday afternoon.

Nebraska Gov. Pete Ricketts, State Sen. Lynne Walz, Dodge County Supervisor Doug Backens and Fremont Mayor Joey Spellerberg were among those on hand when the local nonprofit had a ribbon-cutting at units just a couple blocks away from Linden Elementary School.

During the event, Marty Krohn, president of the LifeHouse board, also announced that the nonprofit is entering the public phase of a capital campaign to remodel its food pantry and renovate and expand its 16-year-old emergency homeless shelter.

Care Corps information states the new project is estimated to cost $2.6 million. Krohn said the nonprofit has secured more than half of these funds, but is seeking help to raise additional monies.

The nonprofit now has a 60-bed emergency shelter, open 24 hours a day, seven days a week. It has a homeless prevention program, various housing programs, a food pantry and clothing store.

In 2021 alone, it provided more than 11,200 nights of stay at its shelter and distributed 357 tons of food through its pantry, impacting more than 7,500 individuals.

On Thursday, an estimated 30 people were at one of the new housing units on K Street as state and city officials lauded the nonprofit’s service to the community.

The governor commended the nonprofit for its services.

“Care Corps LifeHouse is doing wonderful work in the community – whether it’s the food pantry, the emergency shelter and now these beautiful housing units, they’re really working to make sure they’re taking care of the folks here in Fremont,” Ricketts told the Tribune. “It’s a great mission and I’m very excited to be here to see all their great work.”

In February 2019, the Nebraska Department of Economic Development awarded more than $3 million in NHTF funds to provide the housing.

But the next month, Fremont was impacted by historic flooding.

Originally, the grant funds were to be used to rehabilitate about 15 units. But those properties no longer qualified for the grant, because many became part of the flood zone, she said.

Then Fremont Presbyterian Church approached Care Corps, offering nearby land, which the nonprofit was able to buy.

But it faced more obstacles.

“It took a really long time for our contractor to get electric panels and other construction items,” Kucera said.

Yet the units were built.

Twelve units – consisting of two triplexes on K Street and two on L Street – were constructed. One of the K Street units is 100% Americans with Disabilities Act (ADA) compliant. A duplex and a three-bedroom home were built on Somers Avenue.

The units will serve households at or below 30% of the area median income, which Kucera estimated for a family of three would be an annual income of $23,300 or someone making just a little over $11 an hour.

Kucera said the first tenant moved into a unit in the spring.

“What I’m most excited about is this housing provides wrap-around case management services,” Kucera said.

Besides serving as property owner, it also provides case management, which includes budgeting, parenting and life skills classes and connections to mental health and other resources to help tenants overcome barriers.

Kucera calls it a holistic approach to get families on their feet and sustainable, increase their income and, eventually, become homeowners.

She’s also excited about the K and L street locations, because they are close to Linden Elementary School.

One barriers families have is transportation. Now, they can walk kids to school, attend parent-teacher conferences and be more engaged in their children’s education, Kucera said.

Before the ribbon-cutting, Kucera expressed appreciation for those who supported the building endeavor, referencing the “It takes a village…” saying, meaning it takes a community to help a child.

“We are so blessed that we have that amazing village that has come together to help us to see this project through to completion and to help us in all the work we do,” Kucera said.

Spellerberg complimented Care Corps’ LifeHouse for the work it does it each day to help people needing food, clothing and housing.

“This is a very historic day in my mind for the City of Fremont,” Spellerberg said. “As mayor, it makes me really proud to see what is being accomplished by our great nonprofits.”

He shared the story of a man, who’d just gotten out of jail when the flood hit and his most valuable possession – his car – was destroyed.

“But that didn’t stop him,” Ricketts said. “He got involved in the emergency shelter here, got into classes, Narcotics Anonymous, worked with a case manager here and is right now in his own home.”

Ricketts talked about the more than 124,000 meals and more than 11,000 emergency shelter nights Care Corps’ LifeHouse provided during the pandemic.

He said it’s organizations like Care Corps’ LifeHouse that was one of the reasons why Politico magazine ranked Nebraska as having the top state pandemic response. In April, the magazine ranked states on a combination of health, economic, social and educational factors with Nebraska having the best average.

Dignitaries held the red ribbon as Kucera cut it.

Krohn also talked about Care Corps’ LifeHouse’s capital campaign, saying that for more than 25 years it has analyzed the causes of hunger, homelessness and near homelessness. It’s developed programs to help relieve suffering, enhanced ways to prevent homelessness and encouraged self-sufficiency.

He attributed the success to the great staff and board.

Krohn also talked about the importance of facilities, including the shelter, a kitchen to provide meals, thrift store and food pantry.

He said a project is underway to remodel the pantry to make it into more of a grocery store, where clients can shop. Care Corps’ LifeHouse data also said the project will include a teaching kitchen with six stations where families can learn how to use food offered at the pantry, such as how to prepare a whole chicken.

At this point, Care Corps has 20 employees operating out of a shelter building originally designed for eight staffers.

“We have people working in an onsite apartment that we’re not able to use as an apartment right now,” he said.

Care Corps’ LifeHouse is looking to remodel and expand the shelter, which has had approximately 18,000 people go through it.

“It’s starting to show a little bit of wear and tear,” Krohn said, citing the need for painting, new flooring and cabinets. “The building has been used well.”

He encouraged attendees to spread the word about the campaign.

“While we have successfully secured well over half of the funds we need to do the improvements, we still have a way to go,” Krohn said. “We need your help in raising additional funds for our capital campaign.”

When it comes to education, Linda Garcia shares a phrase her grandmother used:

Teens learn much through showing horses

Gracie Thomas has a tender bond with a horse named Bubba.

Methodist Physicians Clinic will be offering this year’s flu vaccine in Fremont and at three other area locations in an easy drive-thru format.

Susan Hicks did a lot of smiling on Monday when Care Corps’ LifeHouse received the gift of a van.

Fremont-area calendar of events for Sept. 12-14

Fremont-area calendar of events for Sept. 14-16

Learn more about area meetings and events, including Classics with a Cause at the drive-in.

Midland University is honoring Sid Dillon with the 2022 Impact Award.

A new Clarmar Elementary School will be built southeast of the intersection of Luther Road and East 23rd Street in Fremont.

No one injured in house fire

No one was injured in a Tuesday morning fire at 505 W. Fifth St., in Fremont.

Fremont-area calendar of events for Sept. 17-19

The Nebraska Association of School Boards (NASB), Board of Directors and staff, recognized the 2022 Award of Achievement recipients during the…

It’s a program with the potential to save lives.

Old-time tractors to roll for a good cause

If you’re in Fremont or some area towns this weekend, you might see a parade of old-time tractors heading down the street.

Mayor elected to League Executive Board

Fremont Mayor Joey Spellerberg has been elected to the League of Nebraska Municipalities Executive Board. The League is a nonprofit organizati…

Some stores are giving out rewards for getting your flu shot

Satellite to crash into rock in outer space

Satellite to crash into rock in outer space

This is a bathroom in one of the new Care Corps' LifeHouse units in Fremont.

Light shines into the kitchen in one of the new Care Corps' LifeHouse units in Fremont.

Guest stand outside new Care Corp's LifeHouse units after a ribbon cutting on Thursday in Fremont.