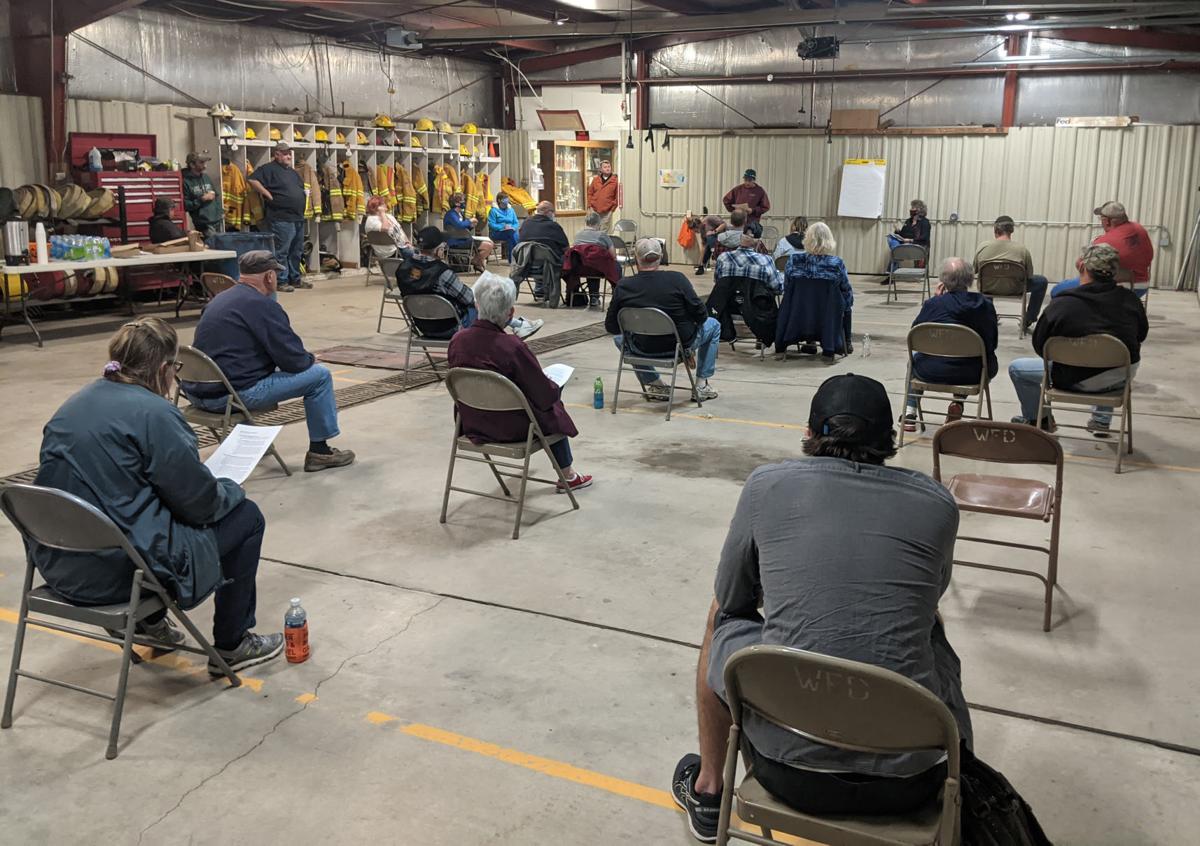 Residents of Winslow listen to Shawn Kotik at a meeting to discuss relocation options for the village at the Winslow Fire Department Wednesday night. 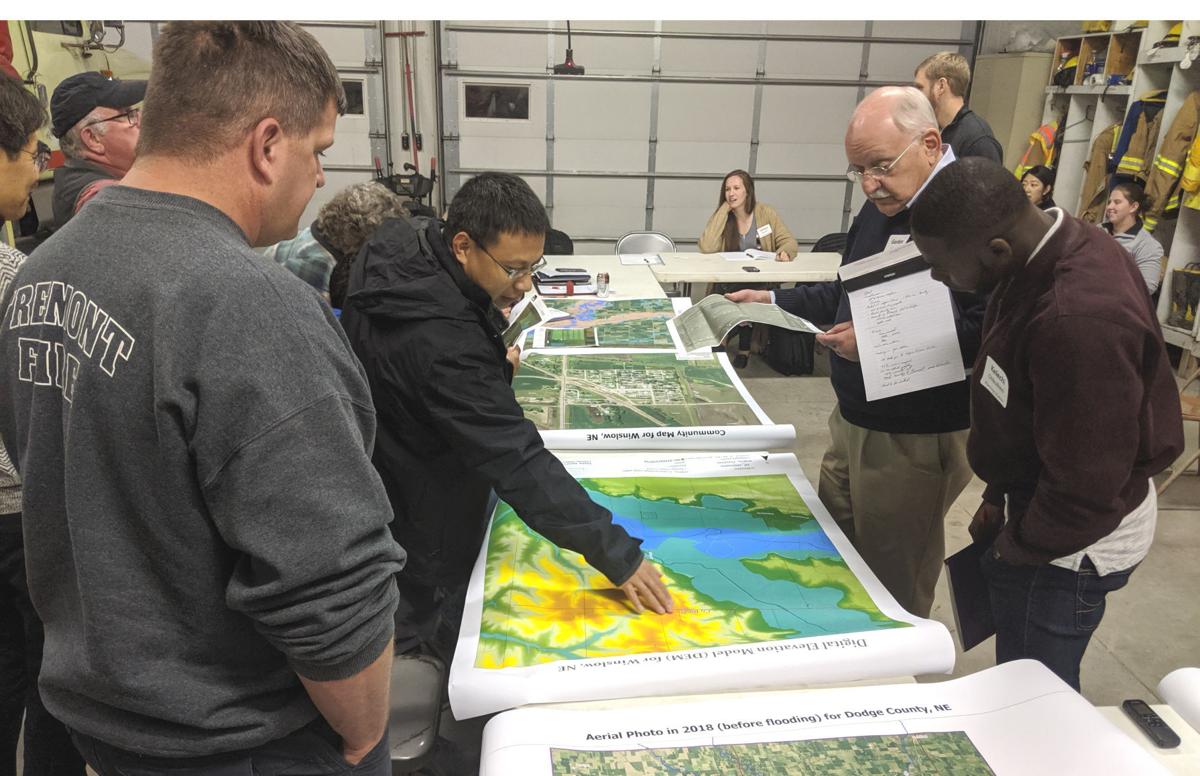 Winslow Fire Chief Zachary Klein, from left, University of Nebraska-Lincoln professors Zhenghong Tang and Gordon Scholz and student Kelechi Chibuikem look at maps of the area around Winslow during an informational meeting in October of 2019.

Residents of Winslow were told they could either stay, leave or relocate the village entirely in the aftermath of last year’s flooding at a meeting Wednesday night.

“You guys have to make your decision on what’s best for your family, what’s best for your community and how that all interrelates, and it’s complex,” JEO Consulting Group resiliency strategist Mary Baker said. “It is not an easy thing to do, but you all are still here.”

The village held the meeting at the Winslow Fire Department to discuss its options after Winslow was ravaged by flooding last spring.

Also in attendance at the meeting were Jacki Trujillo of the Fremont Area United Way and Dodge County Long-Term Recovery Group, as well as Dodge County Emergency Manager Tom Smith.

“I know that I’ve been involved in 30 meetings since April regarding just Winslow, and I can’t imagine how many Shawn [Kotik] and Zack [Klein] have been involved in as the representatives for Winslow for the disaster itself,” Smith said. “We’ve overcome a lot, we made a lot of successes on the bureaucratic side.”

One of those successes was LB 1003, introduced by Sen. Lynne Walz, which allowed for second-class cities and villages to annex land or relocate.

Smith also said the village’s hazard mitigation plan was finally signed off last November and is currently being reviewed. Since then, he said he’s met with the Nebraska Emergency Agency to discover programs on how to help Winslow.

“It was back-and-forth, and it was a learning process as we rely on the state for support in helping us navigate through the relocation process,” he said.

During the meeting, Baker, who has worked with dozens of communities on disaster events, discussed the options the village and its residents had moving forward.

“Our goal tonight, ultimately, is that everybody has the same information and everybody knows where everything is for the village,” she said.

The village is currently about $600,000 in debt, Baker said. A majority of that is $500,000 in municipal bonds, which includes water improvements and the levee system, while the rest is in debt consolidation for flood repairs from the Hooper Bank.

Winslow also has several projects with the Federal Emergency Management Agency, including $121,730 to repair the damaged levee, $173,885 to repair the streets and $127,453 to repair the community building.

The village then has three options: to remain in the floodplain, relocate further west or to dissolve entirely, which Baker said is the worst-case scenario.

“You have a pretty huge debt, as we just talked about, and if you aren’t able to continue to function as a village, that is an option,” she said. “So I bring that up because we want to talk about everything and get it all out in the open tonight.”

Baker also said the first two options could be combined, as some of the residents relocate, while others stay behind.

If the village chooses to stay, Baker said it would pay for its debt with a tax levy, which would be determined based on property valuations.

For those with property acquisitions, Baker said FEMA would pay for 75% of the property’s pre-flood value. The land would be required to stay as open green space and cannot be built on again.

“After the purchase of a property, then the village will be responsible to come in and do the demolition of all the structures,” Baker said. “They will leave trees, they will regrade and put some seed in and leave it as open green space.”

The residents of Winslow would still have maintenance requirements, including its sewer system, Baker said.

“If it does break and if it does go out of service, the village would be responsible for that on top of the debt you already have to come up with a way to fix that,” she said. “So all the maintenance for the street and everything would stay under the village’s umbrella if you stay right here where you’re at.”

Baker also discussed the potential for dissolving, which she said would bring legal ramifications with the village declaring bankruptcy and might affect certain funding for those who stay behind.

“I am a farm girl and I love my rural community, so I never want to see a village dissolve,” she said. “But this is an option that I think we really need to talk about.”

If this happens, Baker said the infrastructure would have to be sold and that those who stay behind would have to purchase their own septic systems.

With relocation, Baker said a hill north of Logan View Public Schools is being scoped out as a potential site. The location would put a moratorium on the debt payments and allow for the residents to pay interest for three to five years during the transition period.

“So that would really be a positive thing for you as far as your debt,” Baker said. “And it would also get your debt consolidated into a more manageable way to look at it.”

With FEMA projects, Baker said they could move to the new location, as funds meant to repair the community center could be used to construct a new one.

The new village would allow for relocation if the properties are structurally sound. If around 10 people move to the new location and 15 new people come in, Baker said property values would go up.

“That definitely would help with your indebtedness too, because the more value that you have that that debt is spread out over, then just the opposite of what we were talking earlier, it goes back the other way,” she said.

The new site would require an environmental assessment and comprehensive plan for the village, both of which would be paid for by donated money, Baker said. Winslow also has $600,000 in donated money, which could pay for around 3/4 of acquisition for the new village.

After the design and engineering phase, Baker said construction could start in 2021 or early 2022. Compared to other communities, she said it took one that was flooded along the Missouri River seven years to move.

The new location would also keep Winslow’s old zip code and provide additional funding streams, as many organizations won’t put money into a floodplain, as well as more after the comprehensive plan is completed.

Baker said a land lottery would be held this winter in which residents would draw numbers to choose the order in which they would get to choose lots.

Although Winslow would still have to maintain the original levee as part of its 50-year agreement until 2054, the new area would allow for growth, as Baker said a Casey’s gas station was brought up at one point.

Trujillo said as flood survivors, the residents of Winslow would be able to receive donated items regardless of where they end up.

“The more people hear about it, the more people jump on and want to donate,” she said. “We have a lot of donated items: drywall, insulation, things like that that we can use to help.”

Christina Kotik of the Winslow Community Planning Committee said the new location would be kept affordable, as she doesn’t want anyone to be hurt by the move.

“We want to build a community, that is the end goal,” she said. “And to make that happen, we have to take into account everybody’s needs and everybody’s desires and what they can make happen.”

With Winslow going through “hell and back,” Baker said she and others would be open for one-to-one conversations with the residents as they make sure everyone is happy with the decisions made.

Fremont Theaters surviving in a post-COVID environment with reopening

After five months of closure due to the COVID-19 pandemic, Fremont Theaters at the Fremont Mall opened its doors on Aug. 21.

Gibson, Von Behren to face off for Ward 1 seat of Fremont City Council

As Election Day on Nov. 3 draws near, Vern Gibson and Paul Von Behren will be finishing their campaigns for Ward 1 of the Fremont City Council.

A Nebraska Extension webinar on Thursday at noon will review the current financial positions of farms included in Nebraska Farm Business Inc.’…

Residents of Winslow listen to Shawn Kotik at a meeting to discuss relocation options for the village at the Winslow Fire Department Wednesday night.

Winslow Fire Chief Zachary Klein, from left, University of Nebraska-Lincoln professors Zhenghong Tang and Gordon Scholz and student Kelechi Chibuikem look at maps of the area around Winslow during an informational meeting in October of 2019.