Become a Member
Read Today's E-edition
Share This
With sleeves rolled up, newly elected Mayor Joey Spellerberg outlines plans for Fremont's future in State of the City Address
0 Comments
Share this
1 of 3 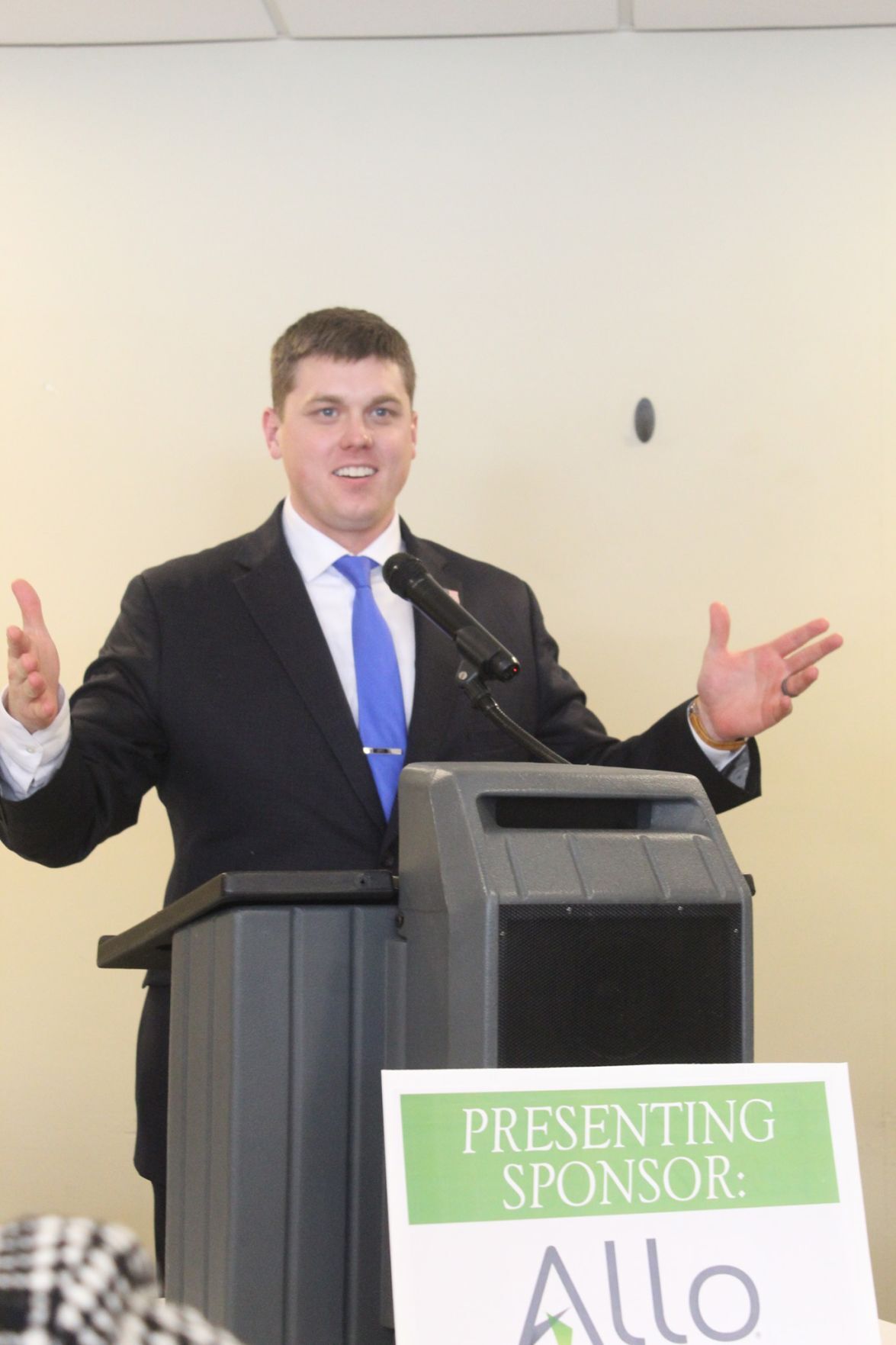 Fremont Mayor Joey Spellerberg speaks during his State of the City Address on Thursday. 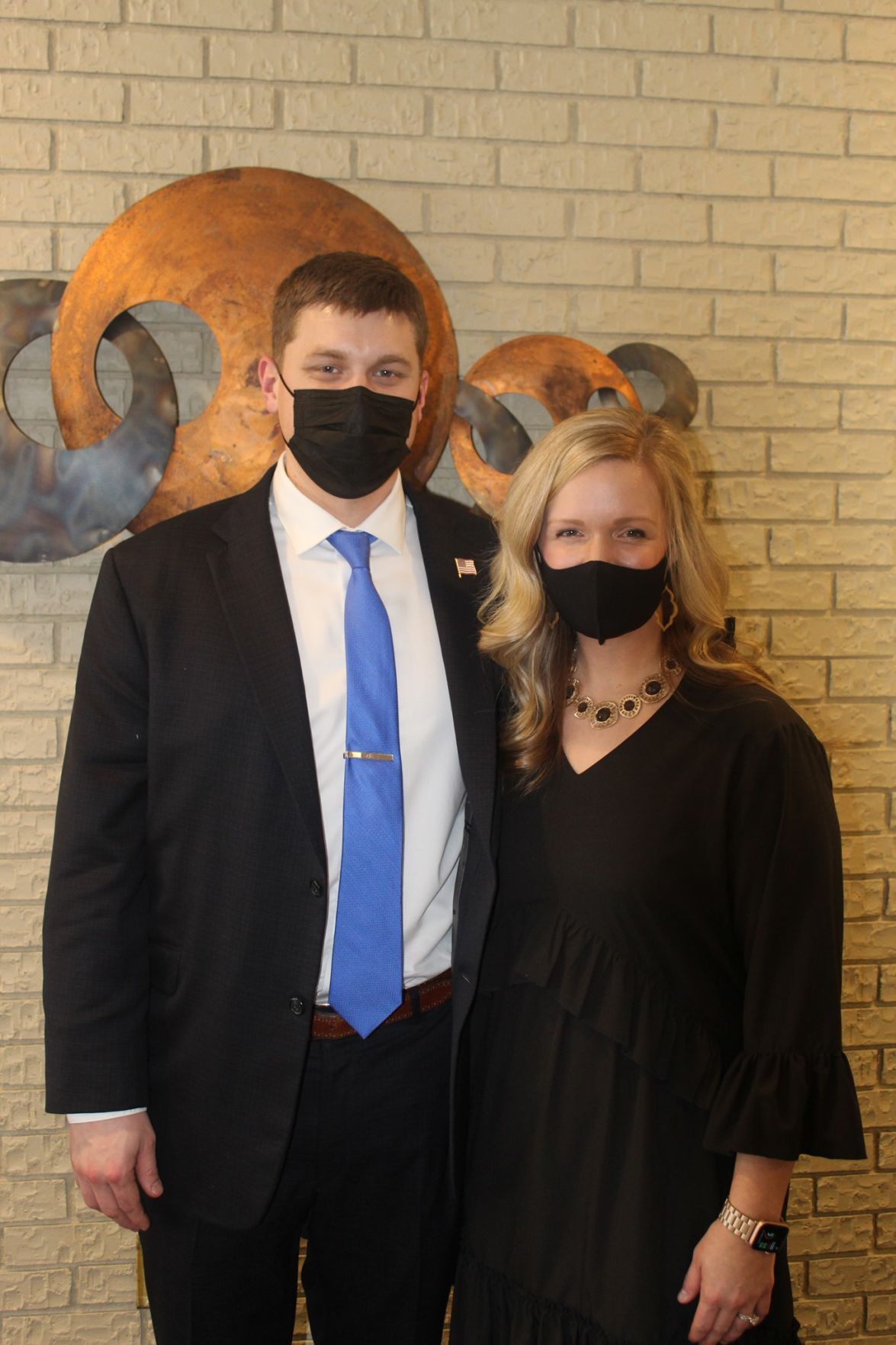 Mayor Joey Spellerberg poses for a photo with his wife, Ashley. 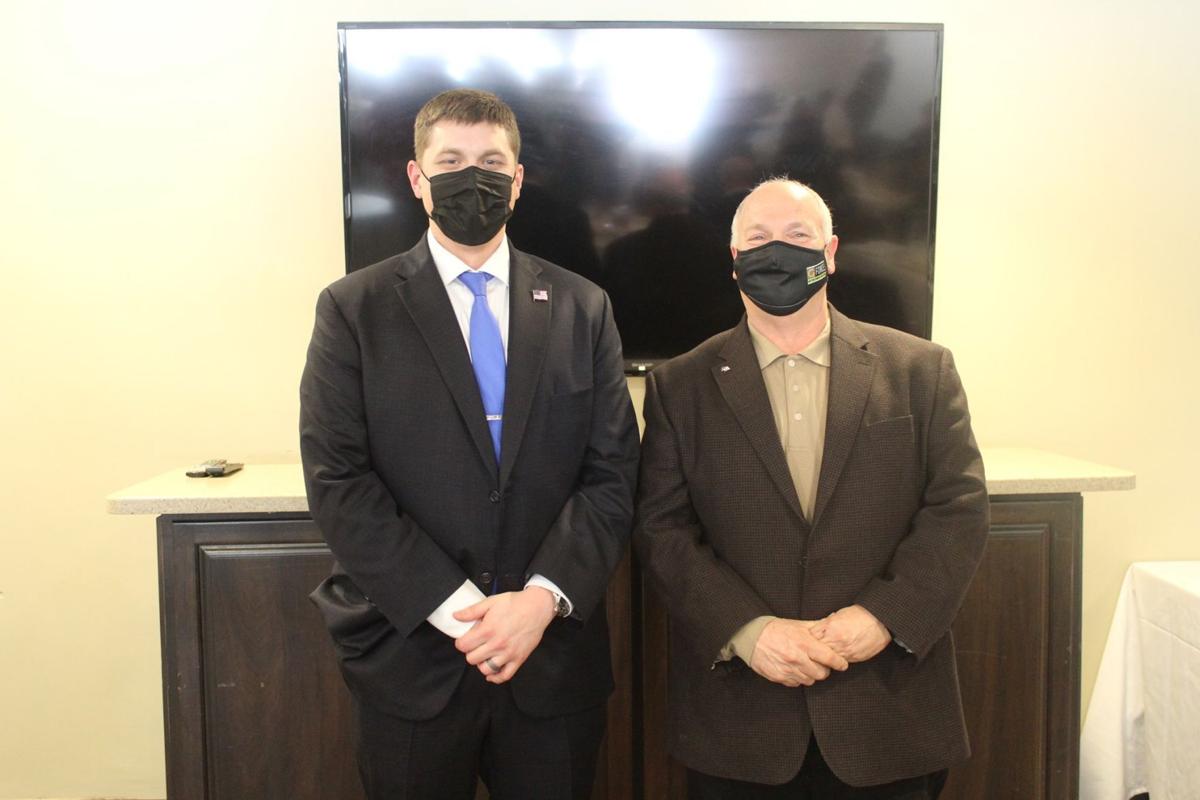 Mayor Joey Spellerberg and Former Mayor Scott Getzschman pose for a photo during the State of the City Address on Feb. 17.

The first four months of Joey Spellerberg’s mayoral tenure have been filled with its fair share of obstacles.

From inheriting the city’s local response to the fight against the COVID-19 pandemic to responding to another year of long-lasting ice jams and potential flooding on the Platte River, the thought of easing into his role as the city’s leader went out the window quickly.

But, the newly elected mayor would likely have it no other way.

“As mayor, I’m very hands on,” Spellerberg said during his 2021 State of the City Address held at the Fremont Golf Club on Wednesday. “I expect a lot out of our staff and those that know me know I don’t do anything half and I’m not afraid to jump right in and start solving problems.”

Even with the existing challenges, Spellerberg laid out a future of growth and potential for the city over the next four years during his address. It’s the first major address made by Spellerberg since being elected in early November.

In his address, Spellerberg laid out his priorities for the future, noting specific projects such as the development of Tech Park and the future of the Joint Law Enforcement Center.

He also laid out other goals centered around creating a stronger working relationship among Fremont City Councilmembers and creating a more accessible, streamlined city government structure.

Spellerberg opened the address by thanking the voters in Fremont for supporting him in his bid for the mayoral seat previously held by Scott Getzschman for a decade.

“This is about Fremont,” he said. “I see myself as a lead servant, not here to be served but to serve you and that includes working as hard as I can to lift everyone in our city up and give everybody opportunities to be successful.”

Spellerberg pointed to over 30 mayoral appointments approved through council early on in his tenure as an example of his willingness to approach the role head-on.

“I’m very proud of the quality of people we have serving our city boards,” he said. “Those positions are volunteer positions and I appreciate their dedication to Fremont. I have met with as many city employees and department heads as possible to let them know I am here to help in any way I can.”

Spellerberg also said he has been working hard to heal the “angst and division” in the Fremont community regarding the city’s animal control and sheltering services.

Fremont City Council recently approved a $190,000 contract with FurEver Home, LLC, for animal sheltering services during a Jan. 26 meeting. The city is also under contract with DCHS, which is priced around $103,000.

“I am proud of how quickly Council and staff have worked to bring this forward,” he said. “Every challenge is an opportunity. I believe that animal control and sheltering will become a strength for us in the future.”

Shifting his focus to the ongoing response to COVID-19, Spellerberg thanked both Methodist Fremont Health and Three Rivers Public Health Department for their partnership on vaccine distribution in the area.

“The vaccine distribution partnership between Three Rivers Health and Fremont Methodist has been a huge success and I will continue to facilitate dialogue between all community partners as we come together to slow the spread and finally defeat the virus,” Spellerberg said.

Spellerberg then began to outline his goals for the upcoming four years, many of which were centered around further developing Fremont into a more attractive destination in the state for both visitors and potential long-term residents.

Fremont must become a premier travel destination while also serving as the perfect place to live, work and raise a family, he said. Spellerberg said that goal can be achieved through further developing the city with the help of the Parks and Recreation Department.

He pointed to the recent completion of the City Auditorium, which was spearheaded by former Parks and Recreation Director Kim Koski.

Koski died in January at the age of 50, but Spellerberg said he plans to immortalize Koski’s hard work to improve the city by dedicating the newly renovated facility after her.

Transitioning to housing, Spellerberg said he is impressed by the number of developments currently in the hopper around Fremont, including Bluestem Commons, Gallery 23 and SunRidge Place.

“Fremont continues to be a leader in attracting quality developments,” he said.

With the addition of new housing options, Spellerberg said he believed the city must continue to grow and develop through projects such as downtown revitalization projects and the Keene Memorial Library expansion.

“Now is the time to complete the library expansion,” he said. “Recent studies indicate that we are long overdue for a remodel of the existing building. The voters of Fremont agreed in 2018 and overwhelmingly passed a $2 million bond issue towards the future library expansion. Heading into my first term as mayor, completing this expansion is one of my top priorities.”

“Partnering with Dodge County on a combined solution is the best way to move forward and will save taxpayer money,” he said. “Fremont has never had a building strictly for the use of our police. Even though the recent bond issue did not pass, our needs did not go away. Our law enforcement facilities are in serious need of an upgrade.”

Spellerberg emphasized his desire to utilize social media and find “other innovative ways” to connect with and inform the public. He also said he plans to implement policies geared toward streamlining city meetings to make them more efficient.

With his goals and priorities laid out for the upcoming term, Spellerberg said he was excited to work with city staff and citizens to push Fremont forward.

“I look forward to serving you and the City of Fremont for years to come,” he said. “In my opinion, Fremont is the best place to live, work and raise a family, and it’s going to be an exciting ride over the next few years. I can’t wait to serve you again.”

Find out more about area fish fry dinners as well as a spaghetti dinner.

Girl Scouts will begin selling their famous cookies at booths across Nebraska on Friday, Feb. 19.

The Agricultural Leadership, Education and Communication Department at the University of Nebraska-Lincoln is launching a photography competiti…

Altrusa International, Inc. of Fremont is offering two scholarships in the amount of $500 each to graduates of Fremont Senior High School and …

Keith Carl said there’s much to be excited about for Dodge County and Fremont’s growth.

Find out what's planned this week at the Fremont Friendship Center.

Fish and fellowship are back on the menu this Lent season in Fremont and the surrounding area.

Fremont City Council and Dodge County Board of Supervisors meetings are among meetings taking place Feb. 23-25.

Fremont Mayor Joey Spellerberg speaks during his State of the City Address on Thursday.

Mayor Joey Spellerberg poses for a photo with his wife, Ashley.

Mayor Joey Spellerberg and Former Mayor Scott Getzschman pose for a photo during the State of the City Address on Feb. 17. 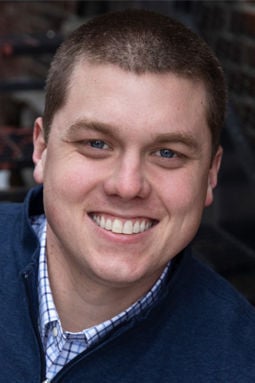