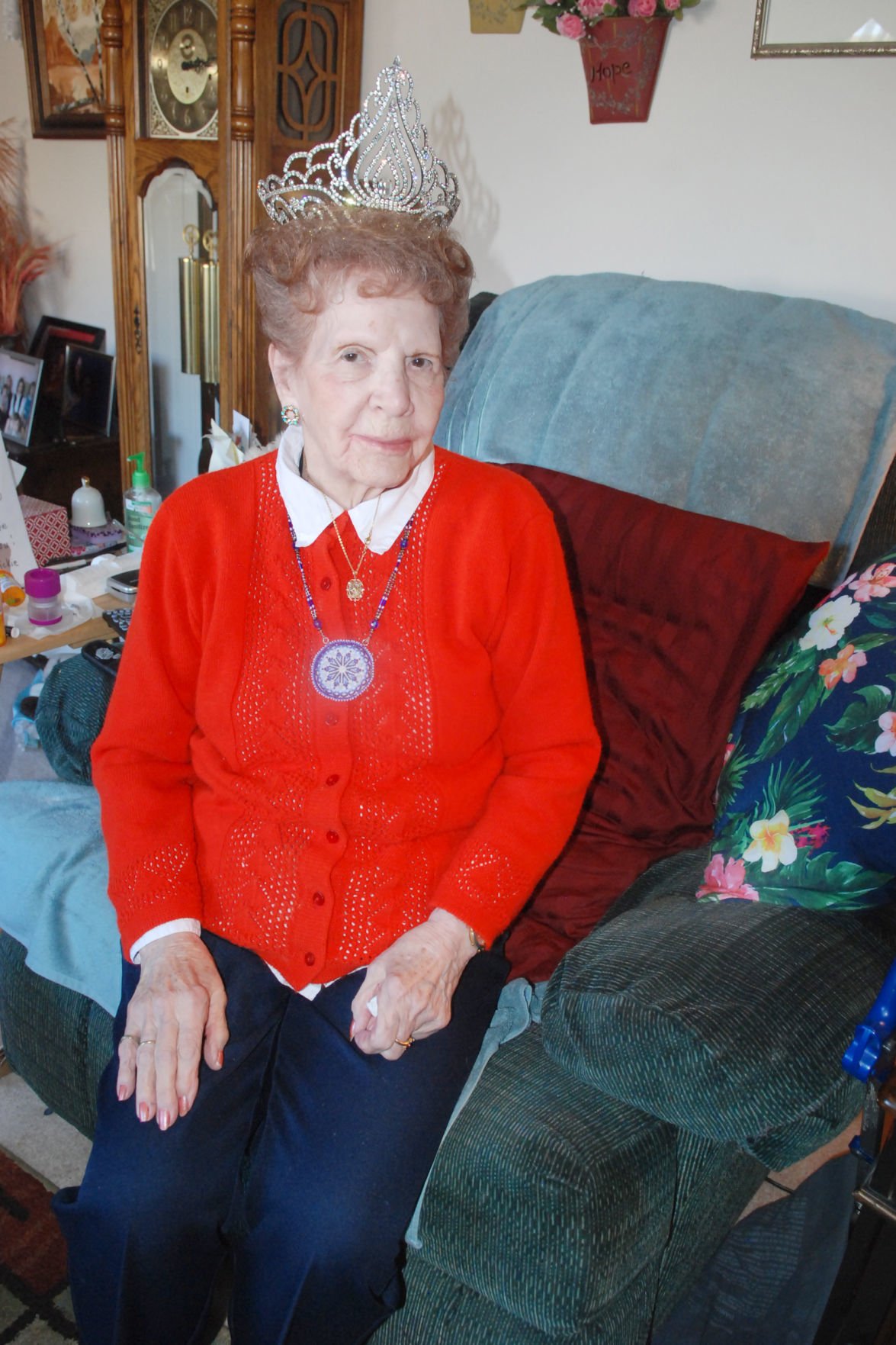 Geraldine "Gerri" Clausen, 94, of Fremont wears the crown she received when she was named the carnival queen as a high school freshman years ago. She donned the crown last Thursday for a photo. 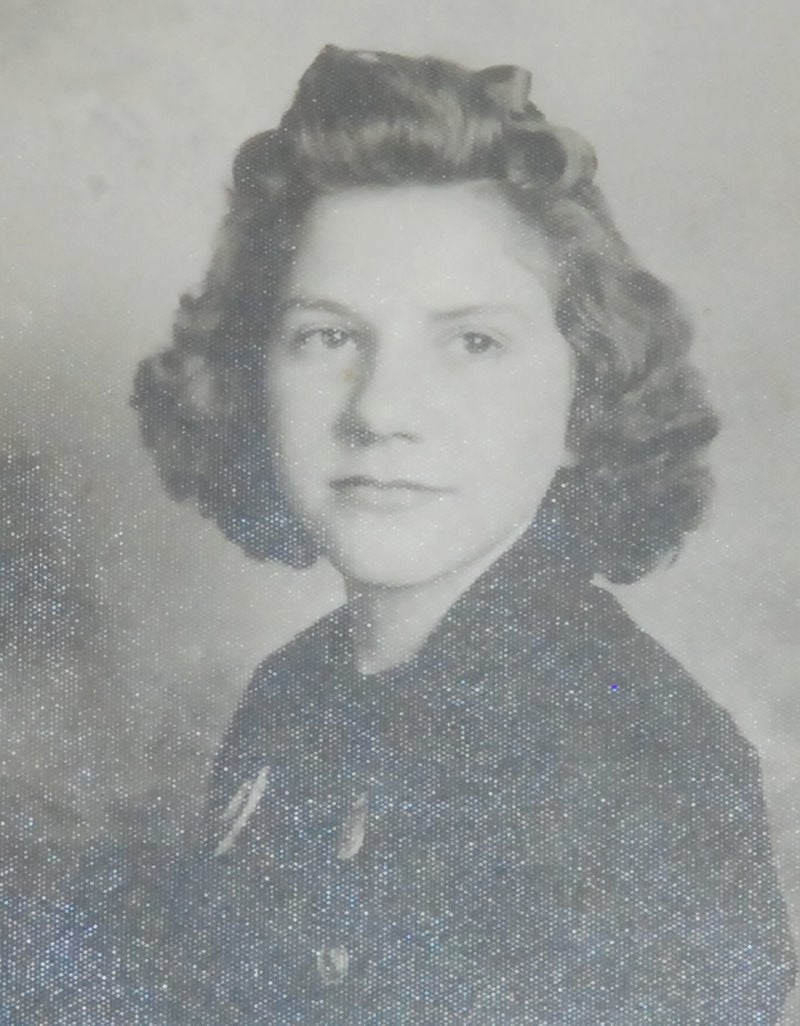 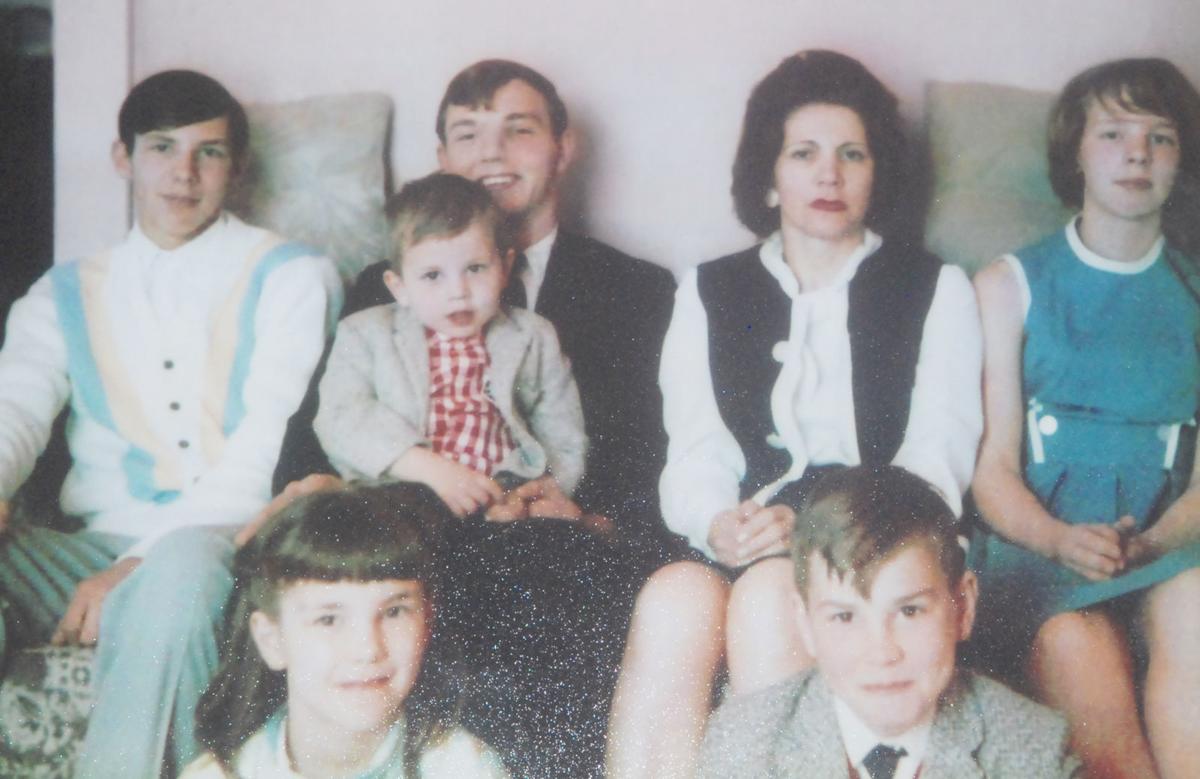 Geraldine Clausen, back row, second from right, is shown with her children in this earlier photograph. Back row, from left, are Jerry, Jim and Vickie. Rick is seated on Jim's lap. In front are: Roxie and Stan. 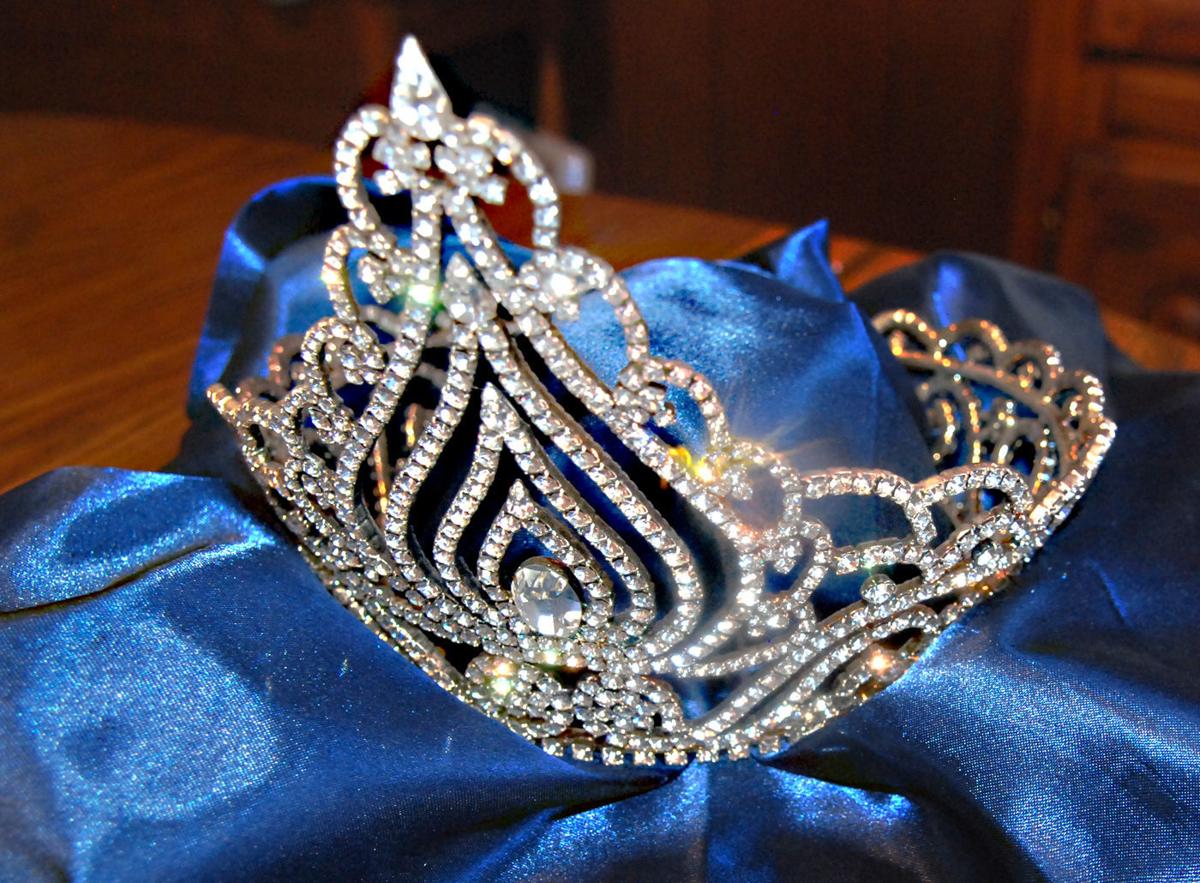 This is the crown Fremonter Geraldine Clausen wore years ago when she was the carnival queen at her school in northeast Nebraska. 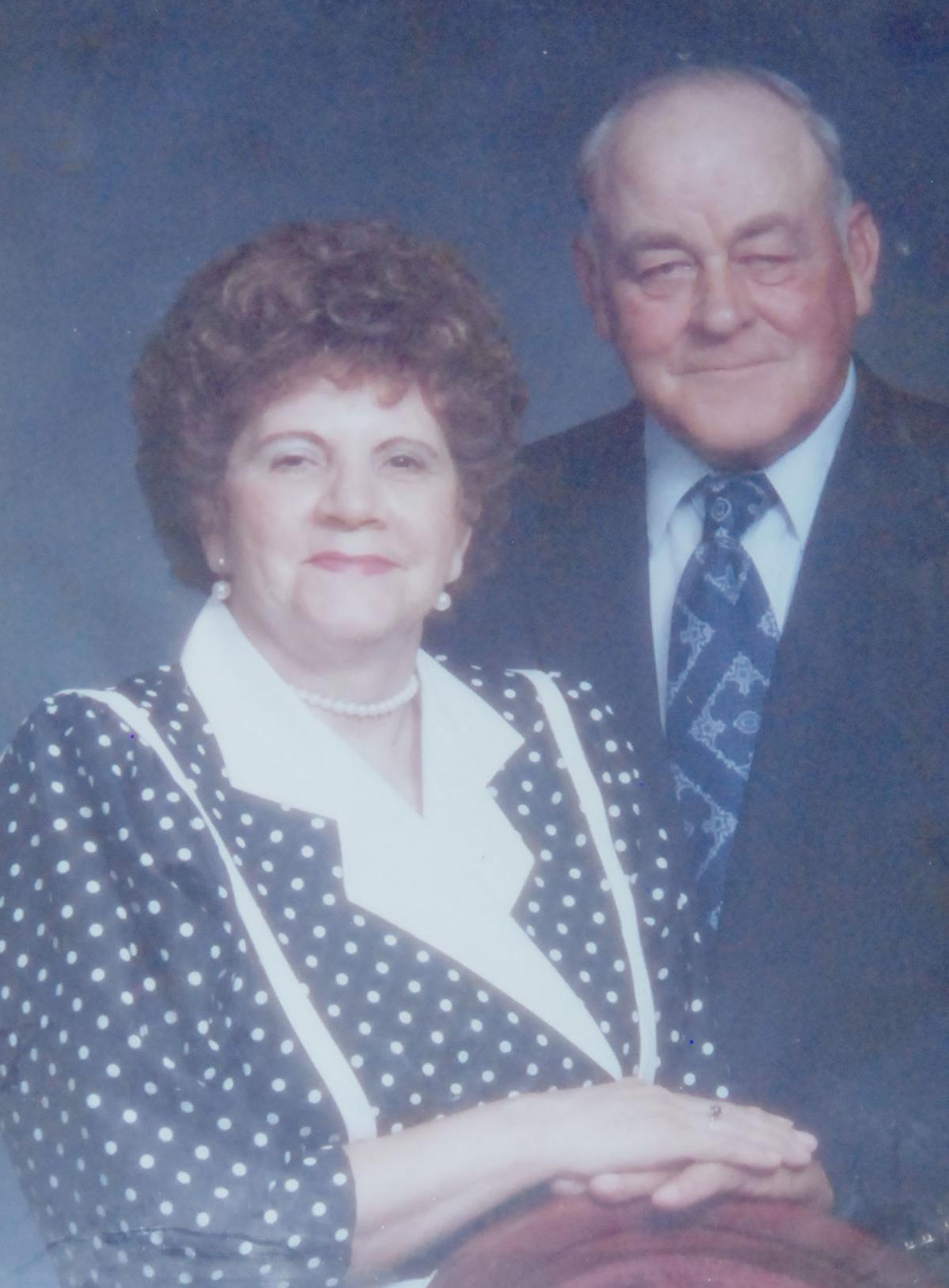 Geraldine Clausen is shown with her husband, Richard, who told her she was beautiful every day of their marriage.

Geraldine "Gerri" Clausen, 94, of Fremont wears the crown she received when she was named the carnival queen as a high school freshman years ago. She donned the crown last Thursday for a photo.

Geraldine Clausen, back row, second from right, is shown with her children in this earlier photograph. Back row, from left, are Jerry, Jim and Vickie. Rick is seated on Jim's lap. In front are: Roxie and Stan.

This is the crown Fremonter Geraldine Clausen wore years ago when she was the carnival queen at her school in northeast Nebraska.

Geraldine Clausen is shown with her husband, Richard, who told her she was beautiful every day of their marriage.

Geraldine Clausen always wanted to be a lawyer.

But she did get to be a queen.

From the economically rough era of the Great Depression to her days as a single mother with six children, the Fremont woman has known difficult times.

Yet any attorney could well argue that at age 94, she remains a picture of perseverance.

Born in 1925 in Carter, South Dakota, she and her family moved from there in a covered wagon to a two-room house. They settled in a harsh area called “The Devil’s Nest” in northern Nebraska. During their marriage, her parents, Lee and Martha Mulford, would lose five of their 12 children.

Clausen’s father later found a one-room cabin with dirt floors built into the side of a bank. Family members slept on the floor. When it rained, the roof leaked and the children gathered under a table to stay dry. A brother killed one snake that came in over the stove. Another day, she found a snake in a box. She ran out of the cabin, screaming.

The children walked barefoot to a Native American school at Santee.

“Mom ordered shoes, but they never came,” she said.

The family continued to move, first to what she calls a shack, then to an empty house on a ranch and later to a farm. She and her siblings walked miles to get to school.

She recalls good times. As a youth, she trained a cow so she could ride it like a horse and round up other cattle. She enjoyed sledding with her siblings.

When she was a freshman at a school at Niobrara, Clausen was crowned carnival queen at a party.

She still has the crown.

After her family moved again, she stayed in town to attend school.

Then her dad said he’d no longer pay for her to attend. He said she didn’t need any more education to be a farmer’s wife.

Years later, she took an aptitude test, which indicated she could have become an attorney.

Clausen was a young, married woman when she had the chance to sing on the Jimmy Morgan radio program.

“But I was too shaky and scared,” she said.

She’d met her first husband at a dance and married at age 18, but later discovered he was alcoholic. They’d divorce and she was pregnant with their sixth child, Rick, when she and her other children — Jim, Jerry, Vickie, Stan and Roxie — moved to the Dodge County Poor Farm.

People claimed the house they lived in was haunted and decades later she’d be interviewed for the TV show, “Sightings.” She recalls a barn light going on and off by itself, the unexplained sounds of someone walking upstairs in the house and the sound of a car running on a farm lane — when there was no car.

After a transformer blew in the middle of the night during a storm — knocking a clock off the wall — she put her children into her car and they spent the night in the Hinky Dinky store parking lot.

She was a truck stop waitress for about 2 ½ years.

Then she got a job as a checker at Hinky Dinky in 1965. She became president of the retail union and a store stewardess. She won $50 after being voted “best checker” by customers.

She ventured into the political arena.

“I was the first woman to run for city council, but I didn’t get enough votes,” she said.

Another candidate, who also lost the election, blamed her for taking votes away from him and claimed he’d never speak to her again.

Yet they became friends after he came through her check-out line with a cart full of groceries and she complimented him on his shopping.

She met her second husband, Richard Clausen, at the truck stop. She didn’t like the truck driver at first, because she thought he had a sour attitude. But they started getting acquainted.

When it was raining one day, he even carried her out to her car. Everyone, who saw it, clapped.

“He was the nicest man,” she said.

She still marvels at how a never-married man would marry a woman with six children.

She’d ask why he never married before.

And every day of their marriage, he’d tell her that she was beautiful.

Before that, she earned her high school equivalency in 1972.

“They wanted me to stay longer,” she said.

After she retired, Clausen and her husband traveled to Branson, Missouri, Texas and Oklahoma. They were married 31 years before he died in 2004.

She and her very protective little dog live in Fremont.

Looking back, she recalls her hobbies, painting and ceramics, and other memories. She’s known for the pies she’s baked — including a pineapple cream pie for which she developed the recipe — and her delicate sugar cookies.

The woman, who always wanted — but never got — a doll as a child, now has a collection of them. She gives them away, too, and has made dolls for families who couldn’t afford them at Christmas.

She buys more than 100 Christmas gifts each year for family members.

And until about three years ago, she hosted Christmas, Thanksgiving and Easter celebrations at her house.

Recently, Clausen put on the crown she received as a freshman and smiled.

Her life hasn’t been the easiest, but she’s made some good memories.

And, after all, not everybody gets to be a queen.

Bob Yanike hopes people really will get lost in the moment at the next Broad Street Revue concert.