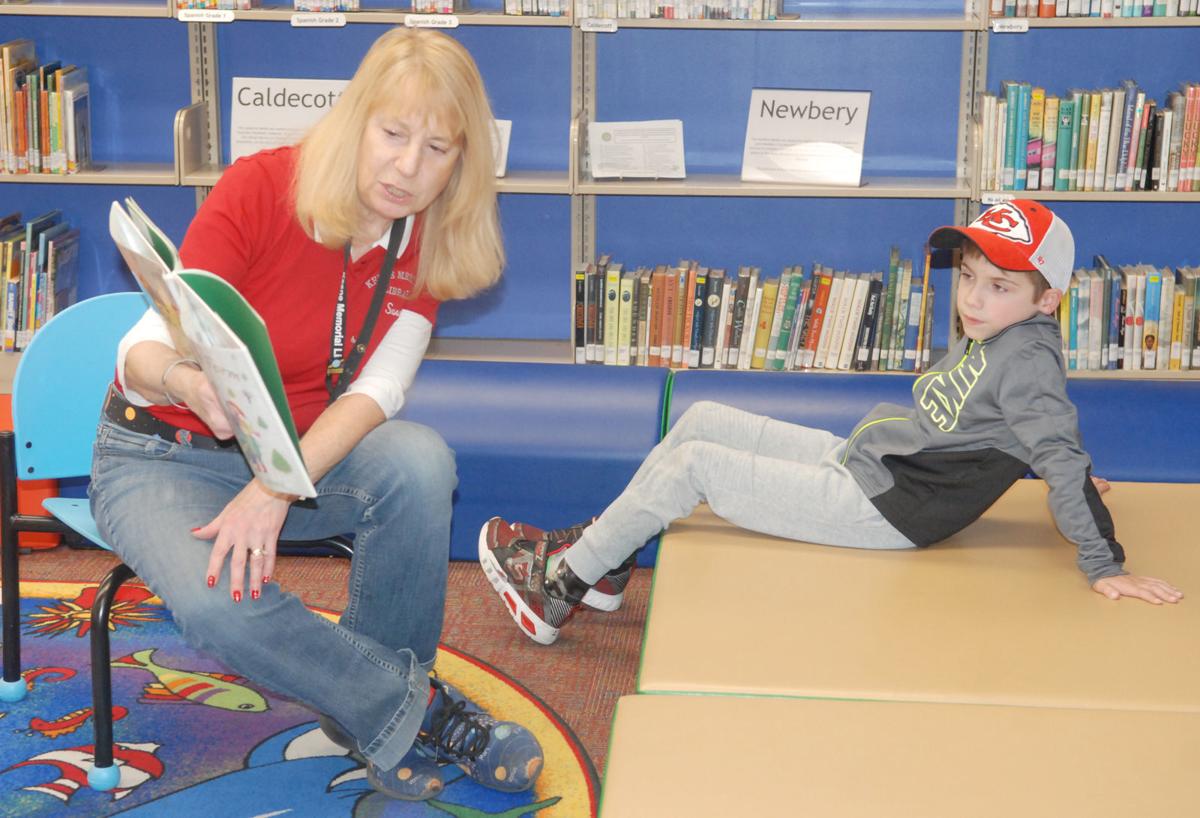 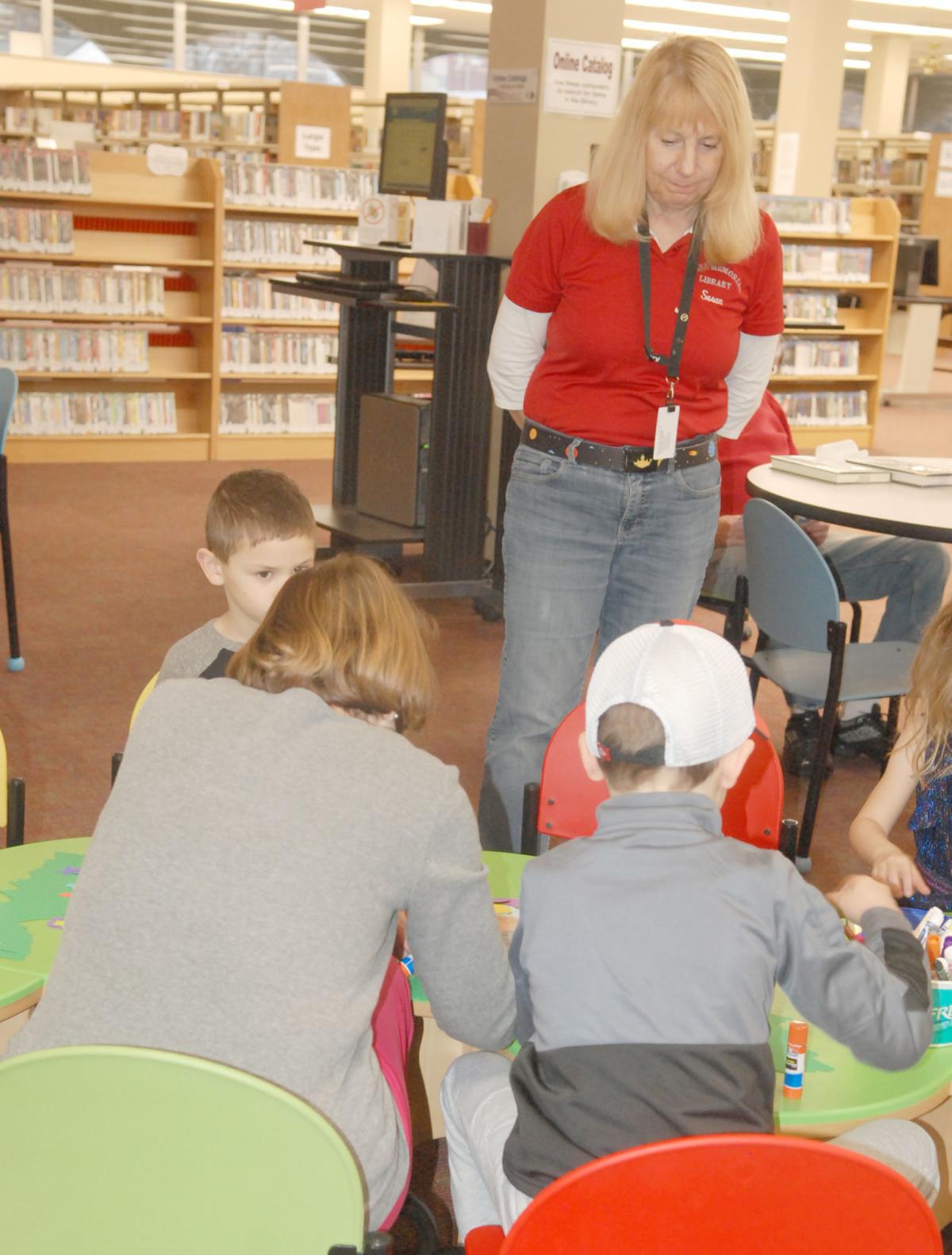 Susan Allen, library aide, watches as a children and a grandparent work on making crafts during Storytime at Keene Memorial Library in Fremont. 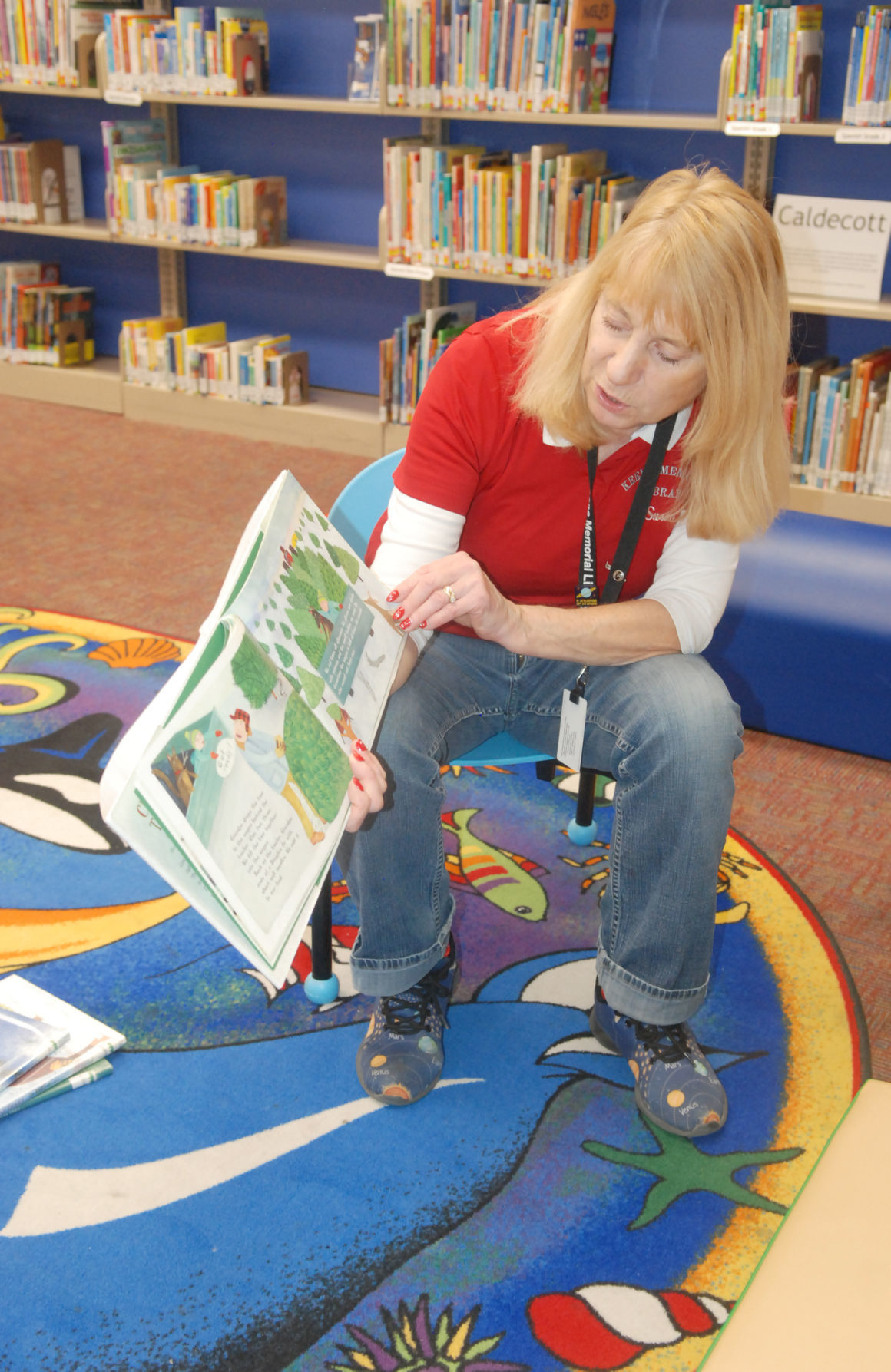 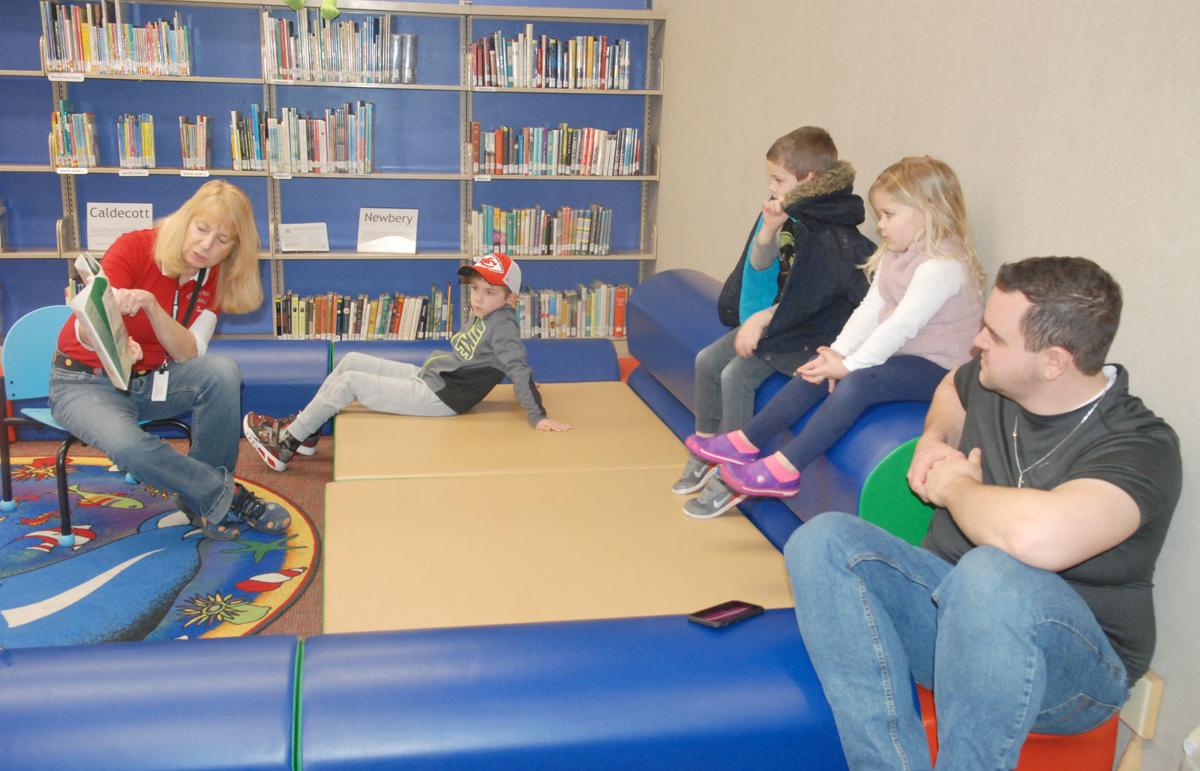 Susan Allen, library aide, reads a story on Dec. 28 to Walter Matteo, left, and Vinny, Amelia and their dad, Matt Zgoda at Keene Memorial Library in Fremont. More children came in later to hear the stories.

And once again that year, Allen would take on the role of the legendary pathfinder’s wife, Jessie Benton Fremont.

Throughout her career and volunteer efforts, Allen has assumed many roles — teacher, library aide, storyteller and even actress.

Allen plans to continue in her job as a kindergarten teacher in the Bennington Public School system.

But recently, she retired as a part-time library aide at Keene Memorial Library in Fremont.

“Sixty hours a week is beginning to be too much,” Allen noted.

And Allen has other plans and dreams.

For one, she wants to spend more time with her real-life husband, Dirk.

She wants to do more at the school where she teaches and also at her church, St. Patrick, in Fremont.

Her biggest reason for retiring as a library aide, however, will incorporate being involved at Keene in other ways, which include helping with its expansion.

Originally from Omaha, Allen graduated from Bryan High School. She later earned bachelor’s and master’s degrees in elementary education with a concentration in early childhood from the University of Nebraska at Omaha.

She came to Fremont in 1990 and she and Dirk married in 1991. She got a part-time teaching job, helping kids with math in North Bend.

When a job came up in the kids’ department of the library, Allen figured she could teach part time and work at the library part time.

Back then, she worked just 17 hours a week at the library.

Allen remembers her early days at the library. Books were checked out via cards that were stamped. Then came the bar code system.

Now, computers are used to check out books and other materials.

She quit for a year at the library, when she was able to teach full time at St. Patrick.

But when that school closed, she was out of a job.

That’s when Barb Bandlow, then the adult circulation manager, asked if Allen would come back to work at the library.

Allen returned to work part time for 19 hours a week and then got a job in a school in the small community of Washington.

But Bennington annexed that school district. Allen would start working full time as a kindergarten teacher for Bennington — a job she’s had more than 20 years.

Allen continued to work part time at the library.

She’d remain at the library for more than 20 years.

During her tenure, Allen’s favorite tasks have involved the summer reading program and Storytime, the latter of which she conducted on Thursday nights and Saturday mornings.

Chesley wanted a Saturday Storytime so more school-age children could attend. She wanted a Storytime session on Thursdays so more parents, who worked during the day, could bring their children.

“The kids are so much fun,” said Allen, who’d see a lot of regular patrons attending.

She’s enjoyed interacting with library patrons throughout the years.

“I love meeting new patrons,” she said. “I really have great friendships with the patrons.”

She also enjoyed playing an elf when Santa was involved in the Storytime.

And for at least 15 years, she’s played another character — Jessie Benton Fremont.

Before that, Fremonter Becky Lowry had the role. She’d come to the library during John C. Fremont Days to read stories to children during the Lemonade on the Lawn event.

When she learned Lowry would be leaving her role as Mrs. Fremont, Allen volunteered for the job.

“I like meeting people, who come to Fremont — describing the history of Fremont to people and play acting Mrs. Fremont,” Allen said.

She loves being part of the parade.

These days, Barry Reker has the role of Mr. Fremont, an explorer, military officer and first Republican candidate for President of the United States.

But throughout the years, different individuals have portrayed the Pathfinder.

“I went through many husbands,” Allen said, referring actors who played Fremont.

One was Jim Davis. Another was Bill Christensen, a longtime history professor at what’s now Midland University.

Allen remembers when Christensen said he would play the role.

“In two weeks, I’m going to be your husband,” he told Allen.

She wasn’t surprised by the news.

“I knew he was going to play Mr. Fremont — and he loved it,” she said of Christensen.

Allen plans to continue in her role as Jessie Benton Fremont, adding that her real-life spouse drives her to different locations during the festival.

That helps Allen, when she’s decked out in her Mrs. Fremont costume.

“It’s hard to drive in a big skirt,” she noted.

Besides continuing her role at Mrs. Fremont, Allen also hopes to get more involved in the annual Friends of the Library book sale fundraiser.

In the meantime, she expects that Saturday Storytimes will continue after January.

Matt Zgoda, one of the parents, expressed his appreciation for Allen’s work.

“She has such a funny way of describing the pictures in the books to keep the kids engaged,” Zgoda said. “She always has fun activities that correspond with the books that the kids are able to do.”

They met in an orchestra rehearsal.

There’s no need to hibernate this winter.

Mary Loftis knows the importance of getting information out about Social Security.

At first, Jackie Beaton thought she had a bad case of stomach flu.

With the many cases of influenza, Terra Uhing is urging people who are ill to remain at home.

Aspyn Aufenkamp made an earlier-than-expected arrival.

Down Memory Lane to play at Eagles Club

Down Memory Lane will be playing from 7-11 p.m. Friday at Fremont Eagles Club. There is no cover charge.

First Lutheran Church at 3200 E. Military Ave. in Fremont will be hosting an American Red Cross Bloodmobile from 7:30 a.m. to noon Sunday.

Ludvigsen seeks re-election to board of education

Susan Allen, library aide, watches as a children and a grandparent work on making crafts during Storytime at Keene Memorial Library in Fremont.

Susan Allen, library aide, reads a story on Dec. 28 to Walter Matteo, left, and Vinny, Amelia and their dad, Matt Zgoda at Keene Memorial Library in Fremont. More children came in later to hear the stories.