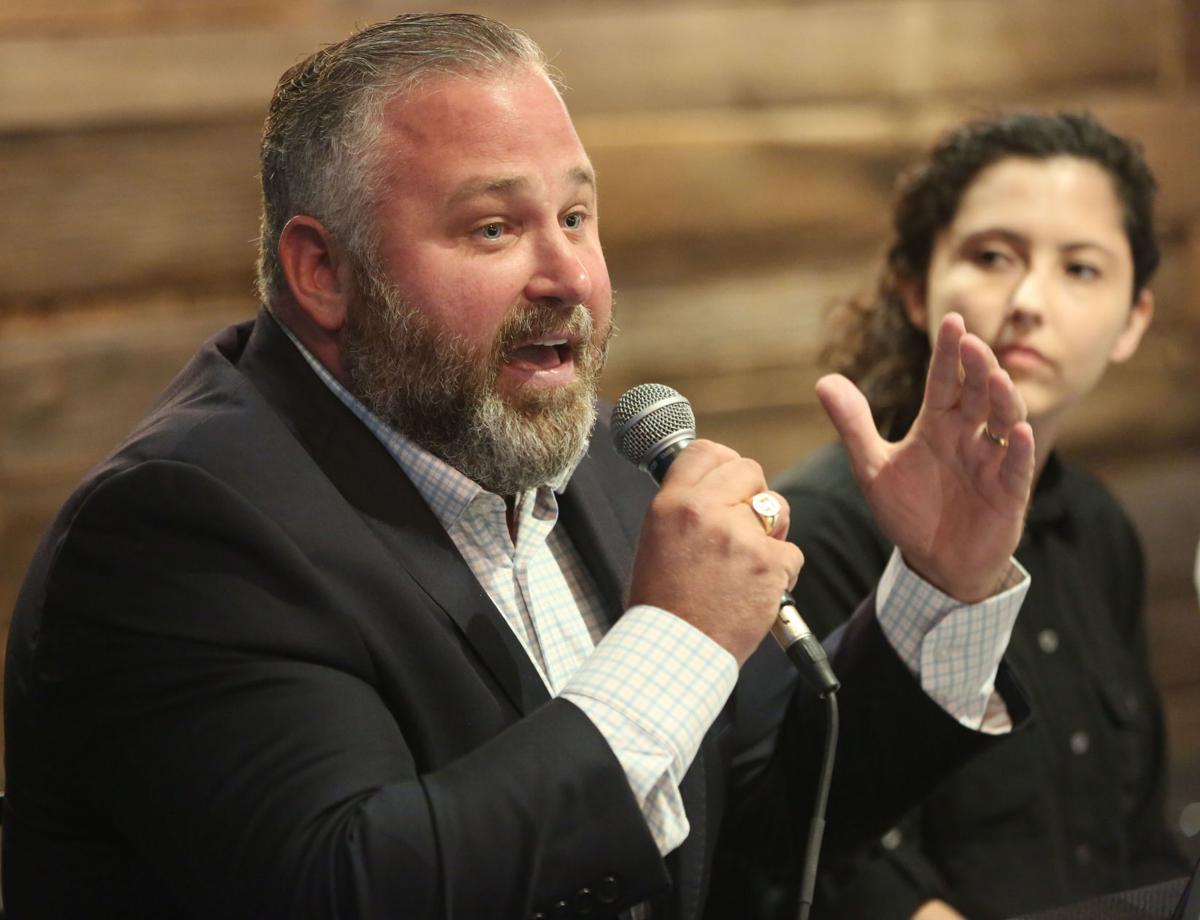 Pastor Brian Gibson, pastor of HIS Church Megachurch, speaks out against masks during a news conference against mask wearing and mask mandates to protect against COVID-19 Tuesday, Aug. 18, 2020. MIKE SIMONS/Tulsa World 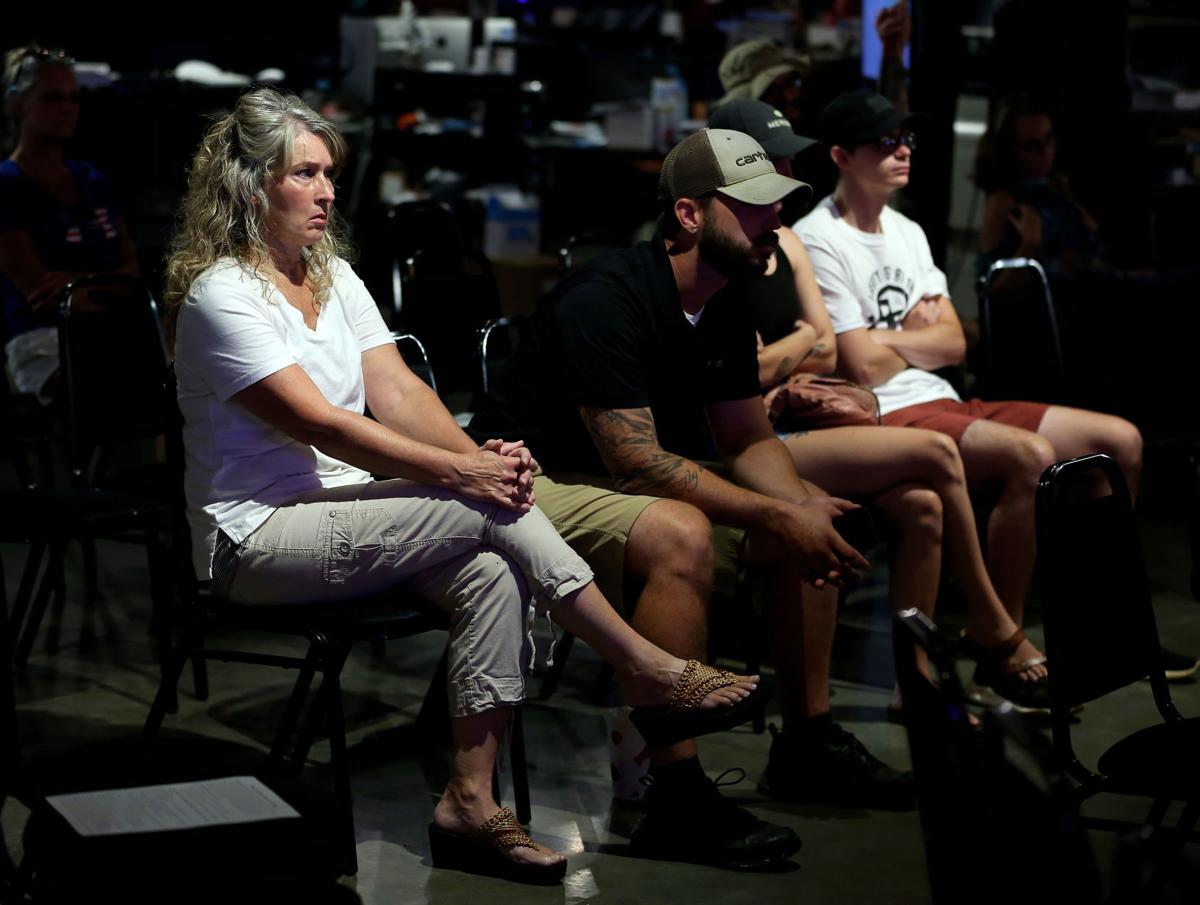 A woman who declined to be identified listens to a news conference against mask wearing and mask mandates to protect against COVID-19 Tuesday, Aug. 18, 2020. MIKE SIMONS/Tulsa World

A Tulsa optometrist and some area business owners have filed a federal lawsuit to challenge the city of Tulsa’s mask mandate.

The duo and others met in Jenks to announce the lawsuit that claims Tulsa’s mask ordinance creates an “oxygen deficient atmosphere” under Department of Labor guidelines. Occupational Safety and Health Administration guidelines define oxygen-deficient atmospheres as having below 19.5% oxygen content, according to the filing.

The suit further alleged forcing individuals to work in such an atmosphere “has been proven to cause irreparable physiological damage” after only 15 seconds of wearing a face covering, despite a July report from the Mayo Clinic that stated such concerns were inaccurate.

Plaintiffs claimed in the filing both they and their employees experienced “migraine headaches, shortness of breath and dizziness” while wearing face coverings. The group is representing themselves along with James DeCristofaro, who was identified in the filing as a New York attorney not yet admitted to practice in Oklahoma.

The lawsuit further alleges the city’s mask ordinance was unconstitutional in that it violates the 10th Amendment, Ninth Amendment, the Equal Protection Clause, Fourth and Fifth amendments, as well as being void for vagueness.

A city of Tulsa spokeswoman said the city won’t comment on pending litigation.

A medical doctor in Ireland went viral online last month after tweeting a video in which his oxygen levels never changed while wearing six masks. The video has been viewed more than 20 million times.

COVID-19 basics everyone needs to know as the pandemic continues

Teacher had students bind girl in sheet and push her down steps while videotaping it, parents allege in lawsuit

The stunt was apparently part of an assignment to reenact a scene from Shakespeare, an attorney said, and the teacher told students they would fail if they didn’t participate. The girl has a brain injury.

The children, ranging in age from 4 to 17, were on their way back from a beach vacation when their van became enmeshed in a pileup that involved at least 17 vehicles, some of which caught fire.

Crash 'likely' due to storm kills 10, including 9 children, in Alabama

Much of the country is experiencing storms, extreme heat or wildfires. Here are the latest updates from Tropical Depression Claudette and other severe weather events across the U.S.

Catholic bishops approved drafting a document that could rebuke politicians, including President Biden, over receiving Communion despite abortion rights support.

The Supreme Court has ruled in favor of a cheerleader who was punished for a profanity-laced Snapchat post made while she was off school grounds.

What is the Catholic Communion controversy?

Some bishops hope the new policy will be a rebuke for politicians who support abortion rights but continue to receive Communion. Here's a look at what has happened and what lies ahead.

"Hopefully when people walk by and they see it, and they participate, hopefully it inspires them to become active in the struggles that are happening right here in Newark and right here in New Jersey," the mayor said.

The Supreme Court has dismissed a challenge to the Obama era health care law, preserving insurance coverage for millions of Americans.

Democrats' attempt to rewrite U.S. election and voting law stalled in the Senate on Tuesday, blocked by a wall of Republican opposition to what would have been the largest overhaul of the electoral system in a generation.

Pastor Brian Gibson, pastor of HIS Church Megachurch, speaks out against masks during a news conference against mask wearing and mask mandates to protect against COVID-19 Tuesday, Aug. 18, 2020. MIKE SIMONS/Tulsa World

A woman who declined to be identified listens to a news conference against mask wearing and mask mandates to protect against COVID-19 Tuesday, Aug. 18, 2020. MIKE SIMONS/Tulsa World