Become a Member
Read Today's E-edition
Share This
When a cat disappeared on a cross-country trip, an army of volunteers worked to get her home
0 Comments
Share this

Seahawks vs. WFT: Updates and scores from MNF

Michelle Huntington was on her way home from work, sitting in the drive-thru line at the Burger King in Semmes, Alabama, on April 25, when she saw a post about a lost cat on Facebook.

The cat, a 2-year-old orange and white tabby named Mitsi, disappeared in the middle of a trip from Florida to Casper when she wiggled out of her harness in a Days Inn parking lot — right across the street from the Burger King.

Huntington ordered some extra chicken tenders and a hamburger patty and headed over.

“I just started walking around, looking for her, calling for her, shining my flashlight looking for her beady eyes under a bush or something,” Huntington said. “After several hours, I couldn’t find her so I had to go home.”

But Huntington came back the next day. And the day after that. A group of dedicated volunteers who had never met Mitsi’s owners quickly came together after her story spread on Facebook in the Mobile area. One of the owners’ grandchildren, living in Colorado, formed a group called “Operation: Get Mitsi Home,” and nearly 100 people from Mobile, Semmes and beyond joined hoping to help out.

They bought food, treats and live traps. They coordinated day and night shifts to search the area, calling Mitsi’s name and trying to lure her with scraps of her owners’ clothes. They chased leads from people in a nearby trailer court who occasionally caught a glimpse of her orange fur.

Almost three weeks after Mitsi went missing, she was found.

But there was still the matter of getting her home.

Norm and Alice Shamion — well, mostly Norm — didn’t plan on getting a cat. Alice is 84, Norm is 90, and they’ve been married for 66 years. They didn’t need anyone else in the house.

But when a litter of kittens showed up at their church in Florida, even Norm couldn’t resist. They took Mitsi home, and in no time he was training her to hop into his lap for treats. Alice said Mitsi adores him.

While the Shamions were waiting for her to come home on Wednesday, Norm checked her setup one more time. Food and treats ready in a box in the guest bedroom. A bed for her, clean and warm. They’re planning to put a cushion in the big bay window at the front of the house, so Mitsi has a place to look out. Her scratchy play structure was already set up in the living room, where Norm and Alice were waiting patiently for the reunion.

“Once everyone leaves, I’m going to give her a can of tuna,” Norm said with a grin. “She’ll love that.”

The pair made the move from Florida to Casper to be closer to family living here. But they’re no strangers to the state — they lived in Saratoga for 18 years and then Sundance while Norm was in the logging business.

The Shamions flew to Casper, and their son-in-law, Rich Hepner, was tasked with driving a U-Haul with the couple’s stuff — and Mitsi — up. The morning of April 25, Hepner tied Mitsi’s harness to a car door, heard some meows and turned to see her running off towards the woods behind the Days Inn.

Hepner looked for her for more than 3 1/2 hours, he said. But eventually, he had to leave.

But the Shamion’s grandson, Derik Hepner, wasn’t ready to accept that she was gone. He posted on Facebook, getting onto a local Mobile lost and found pets page before starting “Operation: Get Mitsi Home.” (Now, the group’s name has been changed to “Mission Completed! Mitsi is headed to WY!”)

“My grandma, you know, that cat is kind of her world,” Hepner said. “Facebook was the only place I knew to turn because we don’t know anybody in that area at all.”

The group grew and grew, full of people eager to lend hours and days of their time to looking for Mitsi. Huntington imagined how she’d feel if it were her grandparents missing a beloved pet, and couldn’t bring herself to give up.

Volunteers put up posters with Mitsi’s picture, offering a $200 reward. Live traps put out with cat food caught three other strays and a couple opossums. A trail camera installed in the woods captured an armadillo and a peacock, whose noises sounded frustratingly like a cat’s meow to the volunteers.

Huntington said she and others in the search party would sit in the Days Inn parking lot after setting the traps, discussing strategy and coordinating shifts but also filling each other in on their lives.

On Monday, the volunteers in Alabama are gathering for a celebratory barbecue in Mobile. As a way to say thank you, Derik started a fundraiser on Facebook aiming to raise $500 for the local animal shelter. As of Friday, it had raised more than $700.

“These people didn’t know each other,” Hepner said. “And from what I understand, they’ve made lifelong friendships.”

She’d been up for 40 hours over the weekend before crashing on Saturday night. She got up on Sunday, made some more flyers and posters and went to check the traps in the woods behind the Days Inn.

“I got a phone call from Michelle, and she was hysterical,” Hepner said.

There, in one of the traps, was Mitsi. She was skinnier than before, had some scratches on her face and matted fur, but it was her. She sent pictures to Hepner, who forwarded them to his grandparents.

“They were ecstatic,” Hepner said. “They finally got to see the pictures and say, ‘Yes, that’s her.’”

So Mitsi hit the road again.

Huntington took the cat to her veterinarian on Monday, then set her up with a crate, litter box and food for the road. She handed her off to another volunteer from the group, who drove the first leg of the journey from Semmes to Gulfport, Mississippi.

There, Mitsi was handed off to Paula Wharton, who drove more than an hour from her home in Covington, Louisiana to lend a ride. She said that something about the Shamions’ story tugged at her heartstrings.

“I wanted to help, but I’m four hours away from Mobile,” Wharton said. “So I told Derik, right off, I’m willing to drive her to Wyoming. Somebody just has to find her and I’ll be on standby to take her.”

Wharton lived in Wyoming — Casper, Laramie and Sheridan — for years, and said she wouldn’t mind making a trip back to visit friends here. She had even lost a cat herself, for two weeks, while living in Wyoming. But the Shamions’ granddaughter, Nichole Osborne, has in-laws in Summit, Mississippi, so she, her husband and their baby decided to make the trip. Twenty-six hours after leaving Casper, they surprised her husband’s family in Summit and picked up Mitsi from Wharton.

By the time they pulled up in front of the Shamions’ new Casper home on Wednesday afternoon (after another trip to the vet), Osborne and her husband were exhausted. But not too exhausted to livestream the reunion, at the volunteers’ request.

Norm met Mitsi at the door, careful to shut it tight behind the family members streaming in for the reunion. She was skinny, he commented, and you could feel her bones under her fur. According to the vet, she had lost two of her seven pounds while lost. She had a purple bandage on one of her front legs, from an IV at the vet.

“Oh, my kitty, my kitty,” Alice said as Mitsi was placed in her lap. “My kitty.”

Mitsi was tired and subdued a little by a calming collar she’d worn on the trip, but didn’t waste time making herself at home. She rubbed against Norm’s leg, ate some food from his hand and found the scratching post immediately.

After a few minutes, she hopped up onto the couch, curled up and fell asleep.

Alice moved from her rocking chair by the window to sit next to her on the couch. Together, they rested.

Photos: Mitsi the cat returns to her parents in Casper after disappearing in Alabama

The 23 Cat Breeds That Shed the Most

More often than not, a cat’s fur is soft to the touch, and petting a feline has proven positive physiological effects. With different lengths,… 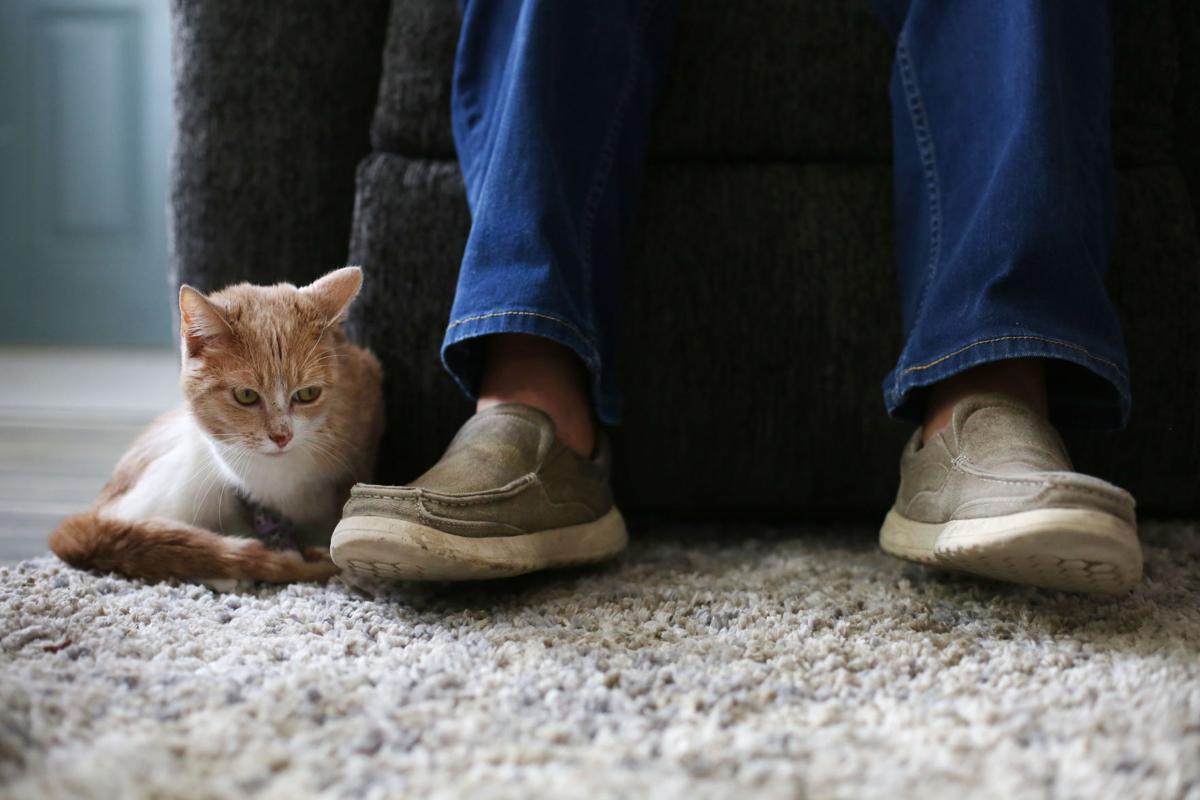 Mitsi curls next to the feet of her owner Norm Shamion soon after being reunited Wednesday in Casper. A group of volunteers found Mitsi after she disappeared on a trip between Florida and Wyoming. 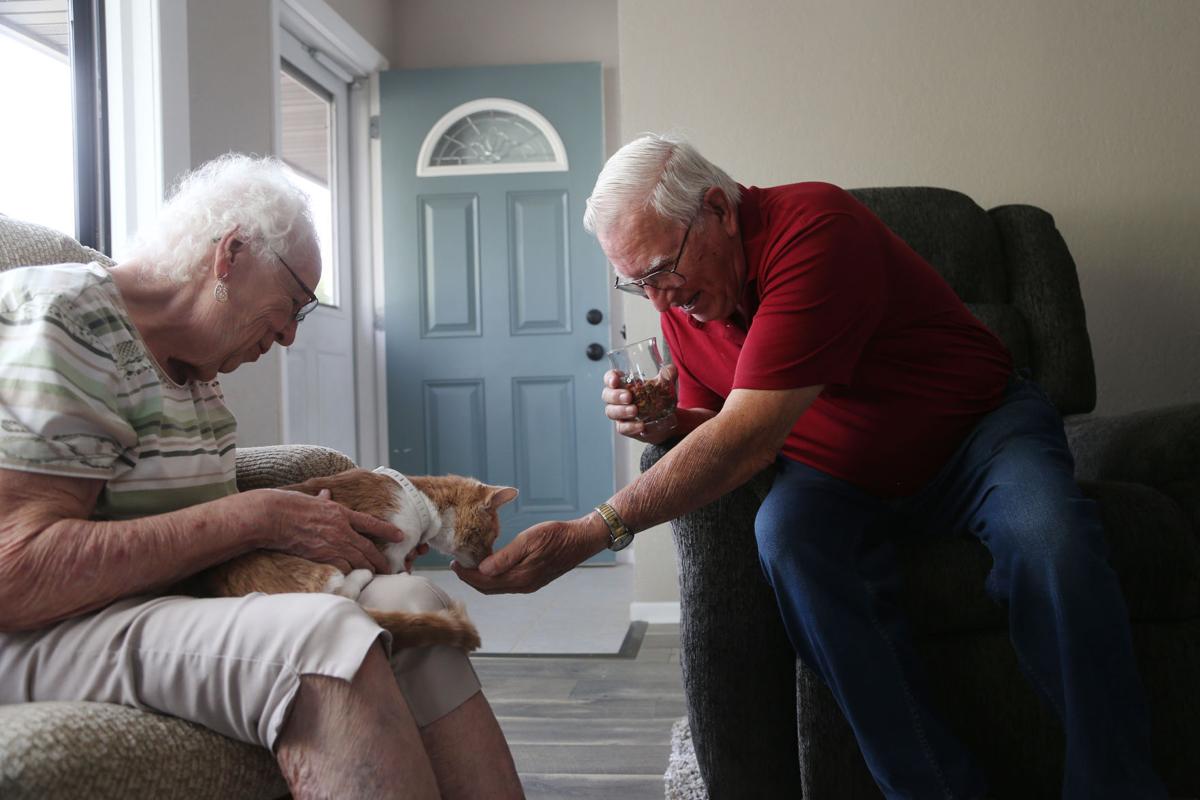 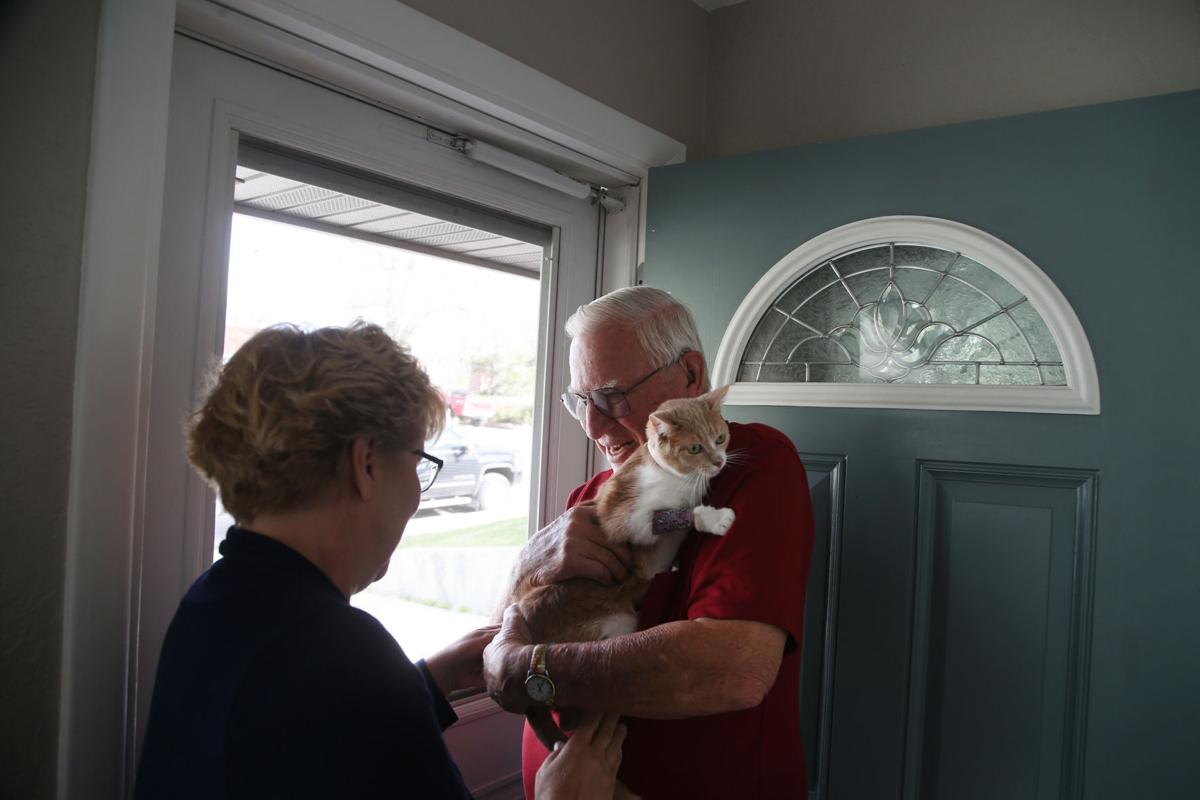 Joan Hepner hands Mitsi the cat over to her owner Norm Shamion on Wednesday in Casper. Mitsi went missing after wriggling out of a harness while in Semmes, Alabama. 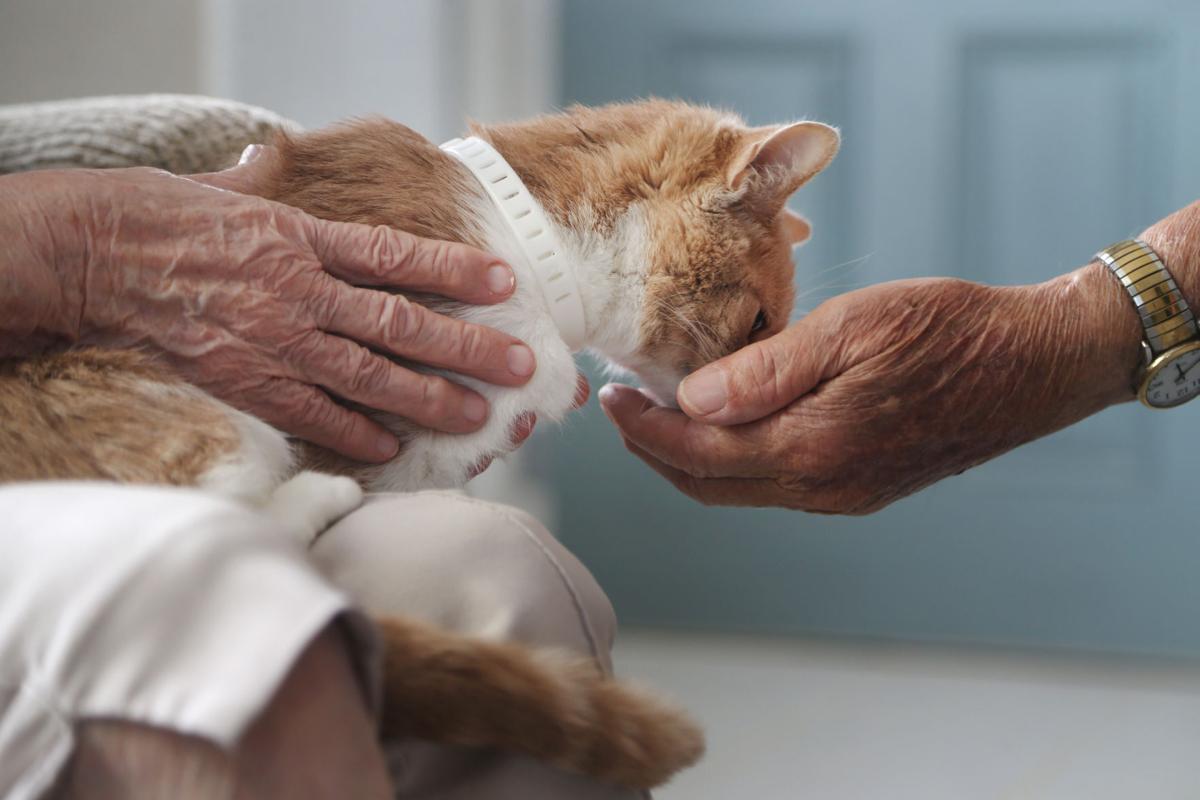 Alice Shamion holds Mitsi in her lap while her husband Norm feeds the cat from his hand. 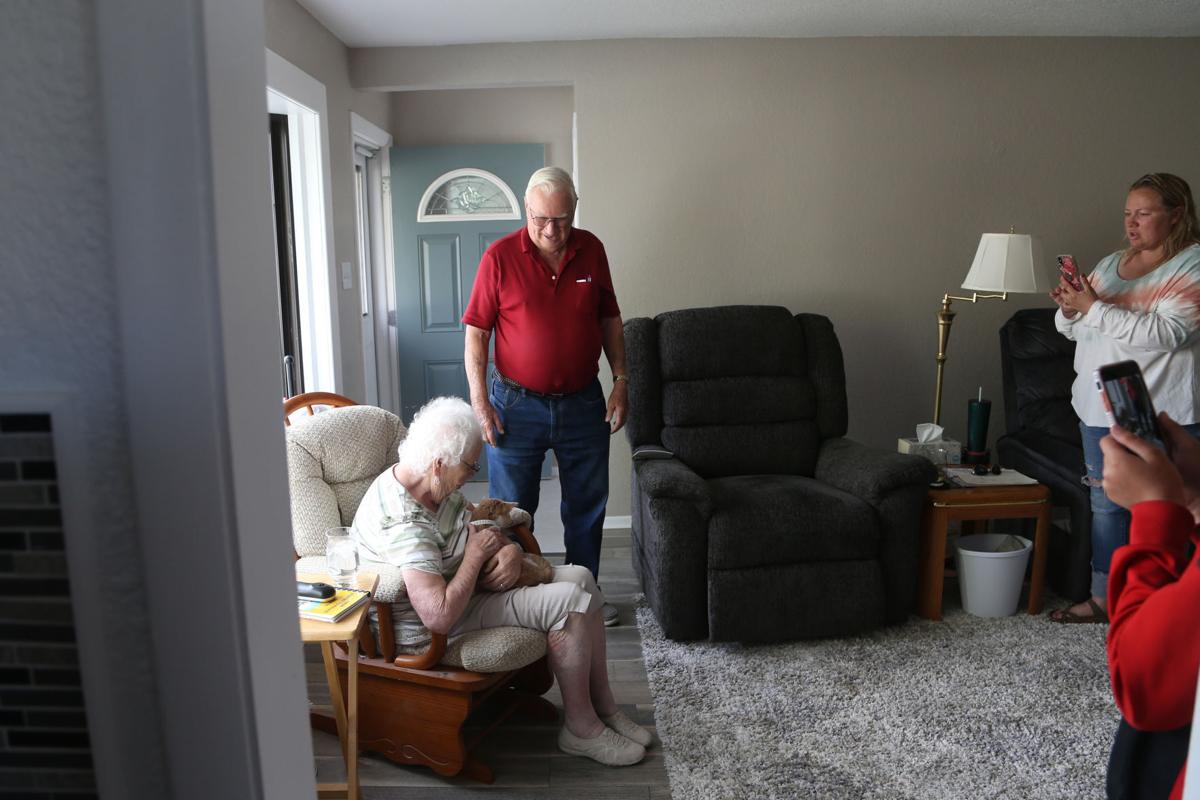 Family surrounds Alice and Norm Shamion after their cat Mitsi is returned to the couple.