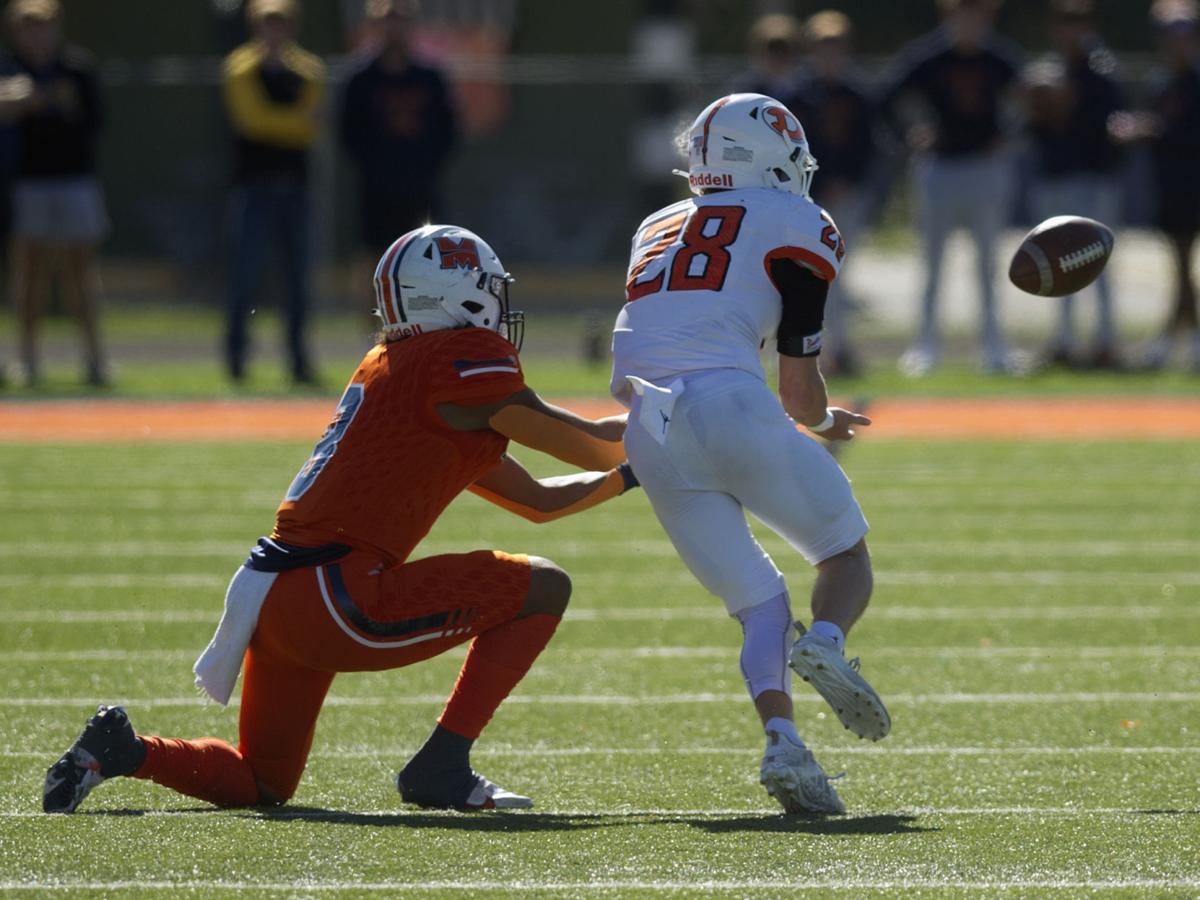 Doane defender Cade Wiseman steps in front of a Midland wide receiver Omuiri Garcia to intercept the pass. Wiseman returned the pick for a touchdown, one of five Warriors turnovers in a 24-13 loss to the Tigers Saturday at Heedum Field. 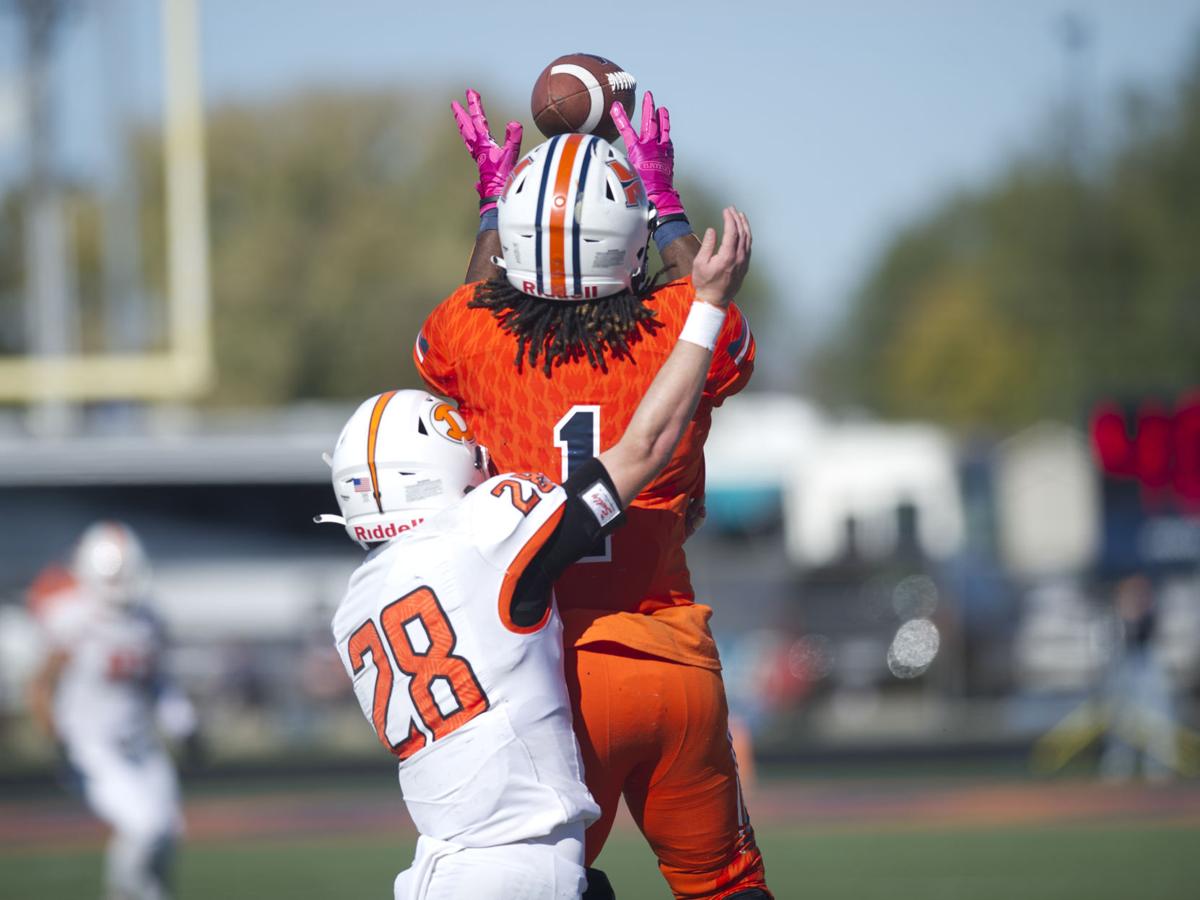 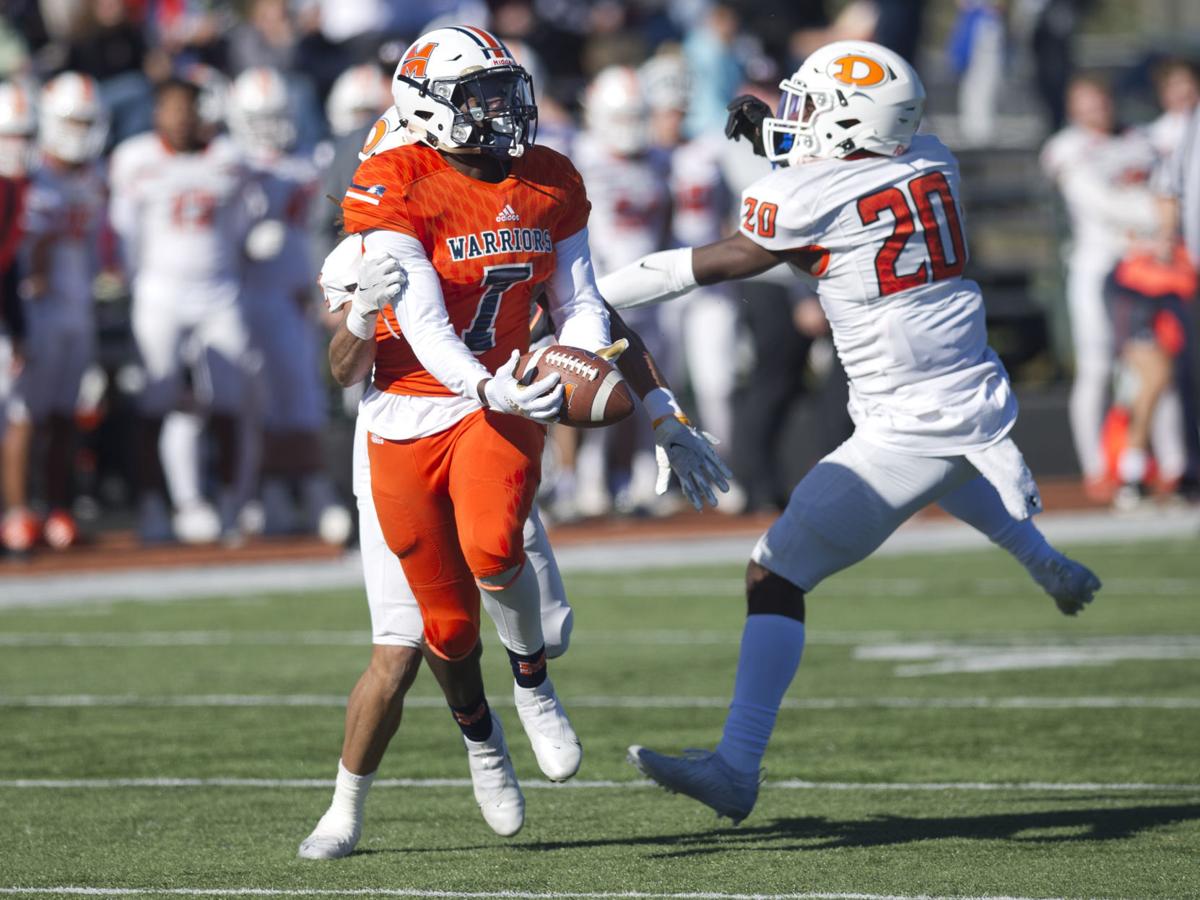 Midland's Darrin Gentry hauls in a reception in the fist half of the Warriors 24-13 loss to Doane Saturday at Heedum Field.

Turnovers once again cost the Midland football team as Doane took advantage of five giveaways to beat the Warriors 24-13 Saturday at Heedum Field.

The loss drops Midland to 4-5 overall and 4-4 in the GPAC standings.

The Tigers scored 10 points off of the four interceptions—thrown by three different players—and one fumble.

Midland jumped out to an early lead, forcing a three-and-out on the opening Doane possession, then getting plus-field position after a short punt.

With freshman quarterback Hunt Boutin getting his first collegiate start, Midland moved the ball down the field but had to settle for a Jared Quinonez 29-yard field goal.

After another solid three-and-out by the Midland defense, the game seemed poised to open up for the Warriors. However, the first play of their next saw the Tigers pounce on the passing route, intercepting Boutin and returning the ball to the end zone from 54 yards out to take a 7-3 lead.

A Boutin fumble deep left the Warriors defense with their backs against the wall, but four consecutive stops at the goal line kept Doane from widening its lead.

Midland drove 74 yards after the defensive stand, but came away empty handed as wide receiver Colby Stevens tossed an interception on a trick play.

The Warriors scored the final points of the half, tacking on another Quinonez field goal with six seconds left in the first half after a 39-yard strike from Jake Ashby, who came on in relief of Boutin, to Darrin Gentry got the Warriors to first and goal.

Doane notched the first offensive touchdown of the game midway through the third quarter with a 14-yard rushing score to extend their lead to 17-6.

In the fourth quarter the Tigers completed a 10-play, 79-yard drive with a 4-yard plunge to put in front 24-6 with just over 13 minutes to play.

Midland found its offense briefly after Doane’s second score of the second half with Ashby moving the offense down the field in 1:43, ending in a 14-yard hook-up with Austin Harris.

Kenneth Carr III has a standout day for the Warriors catching the ball. He hauled in 9 passes for 166 yards. Harris finished with 6 catches for 68 yards, with the lone Midland touchdown on the day.

On the ground, the Warriors were bottled up. They tabulated just 23 yards on 21 attempts as a team.

Defensively, four players registered 10 or more tackles. Leading the way was Xavier Green with 15 stops. Chase Lipsys, Cash Nichols, and Dylan Egr were close behind with 13, 12, and 10 tackles respectively. Travis Voight had a pair of sacks on the day before his afternoon was cut short due to injury.

Midland (4-5, 4-4 GPAC) will play their final road game in week ten, traveling to Hastings (2-6, 2-6 GPAC) with the Watchorn-McLaughlin Trophy on the line.

Kickoff is set for 1 p.m. at Lloyd Wilson Stadium.

GPAC Players of the Week

Midland snapped a four-game losing skid with a 63-52 win over Mounty Marty Wednesday at the Wilkert Event Center.

In their final meet before the conference championships, Midland University made the short trip to face rival Morningside University on Saturd…

Midland University’s bowling teams were back on the lanes this past weekend competing in the Kegel Collegiate Classic.

The Midland men’s losing skid extended to five games Saturday as the Warriors lost 77-63 to Dordt on the road.

In a newspaper interview, John Stockton claimed without evidence that more than 100 professional athletes have died after receiving the COVID-19 vaccine.

Doane defender Cade Wiseman steps in front of a Midland wide receiver Omuiri Garcia to intercept the pass. Wiseman returned the pick for a touchdown, one of five Warriors turnovers in a 24-13 loss to the Tigers Saturday at Heedum Field.

Midland's Darrin Gentry hauls in a reception in the fist half of the Warriors 24-13 loss to Doane Saturday at Heedum Field.