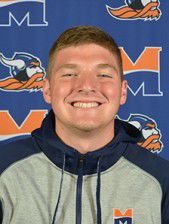 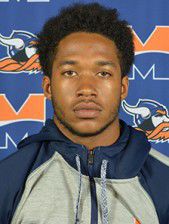 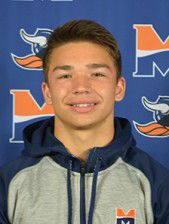 Griffiths’ 24-yard field goal with :40 left lifted the Warriors to a 31-28 victory over 24th-ranked Dordt. Midland and the Defenders end the season at 7-4 overall, including 6-3 in the Great Plains Athletic Conference and tied for third in the league.

“To start out 1-4 and lose three games by 10 points, and with all the injuries we had, to rattle off six straight wins with four of them on the road is quite an accomplishment,” Midland coach Jeff Jamrog said.

Defensive back Christian Harmon came up with the play that helped set up Griffiths’ game-winning kick. After a Griffiths’ punt pinned the Defenders at their 1-yard line, two plays netted no yards. On third-and-10, quarterback Noah Clayberg tried to hit Jake Dodge at the 35, but Harmon picked off his third pass of the day.

Dordt had one final possession, but linebacker Jett Hampton picked off a Clayberg pass to ice it.

“Our guys played lights out. All three units were pivotal in the win,” Jamrog said. “Offense was solid all day, special teams made some big plays, and the defense played perhaps its best game against a really good offense.”

Maxmus Wold’s 2-yard touchdown — his third score of the game — put Midland ahead 28-14 with 4:44 left in the third quarter. The Warriors maintained that advantage entering the final period.

The Defenders closed the gap to 28-21 on a 20-yard touchdown pass from Clayberg to Levi Jungling with 7:56 remaining. Two plays following the kickoff, Oswald lost a fumble that was recovered by Connor Bosma at the MU 38. The turnover helped set up Clayberg’s 1-yard touchdown run with 4:58 remaining that tied it.

Midland outyarded the Defenders 394-328 in total offense, including 248-124 on the ground. The Warriors forced five turnovers in the win.

“We ran the ball for twice as many yards as Dordt and won the turnover battle by three,” Jamrog said. “All three units stepped up in the last two minutes of the game.”

Daniels, who opened the scoring with a 59-yard touchdown pass from Oswald, led MU with 88 yards receiving on four catches. He also rushed seven times for 108 yards.

Oswald was 9 of 20 passing for 146 yards while Wold rushed 28 times for 80 yards. His 1-yard TD run gave the Warriors a 14-0 advantage with 3:42 left in the opening period. Wold, a freshman from Bellevue East, rushed for 596 yards and seven touchdowns in just nine games this fall.

Dordt knotted the game at 14 at halftime with a pair of second-quarter scores — Levi Schoonhoven’s 1-yard run and a 3-yard jaunt by Clayberg.

Sophomore Trevor Havlovic had 10 tackles to lead the Midland defense. Hampton finished with nine while Theo Blum had eight. Harmon and Zack Acamo recorded seven each.

Jamrog praised his senior class for helping the Warriors rebound after a 1-4 start to the season.

“Our hats go off to our seniors, our first class,” Jamrog said. “They left a great legacy and foundation to build on. We have a great nucleus coming back to build on this momentum from this season. The future looks bright for our football program.”

SAVE on your first 3 months! Join today