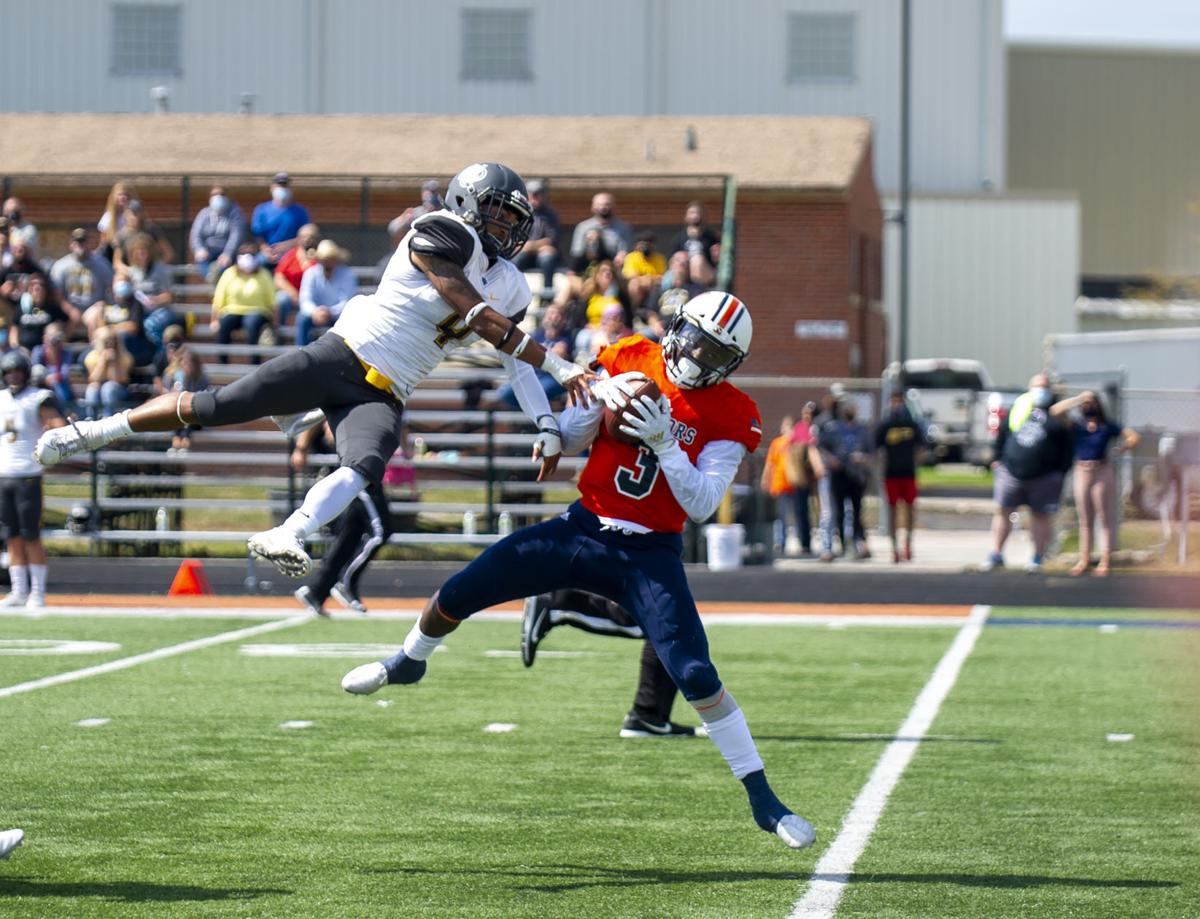 Midland wide receiver Darrin Gentry hauls in pass during the Warriors 22-14 loss to Dordt Saturday at Heedum Field. Gentry scored on the play. 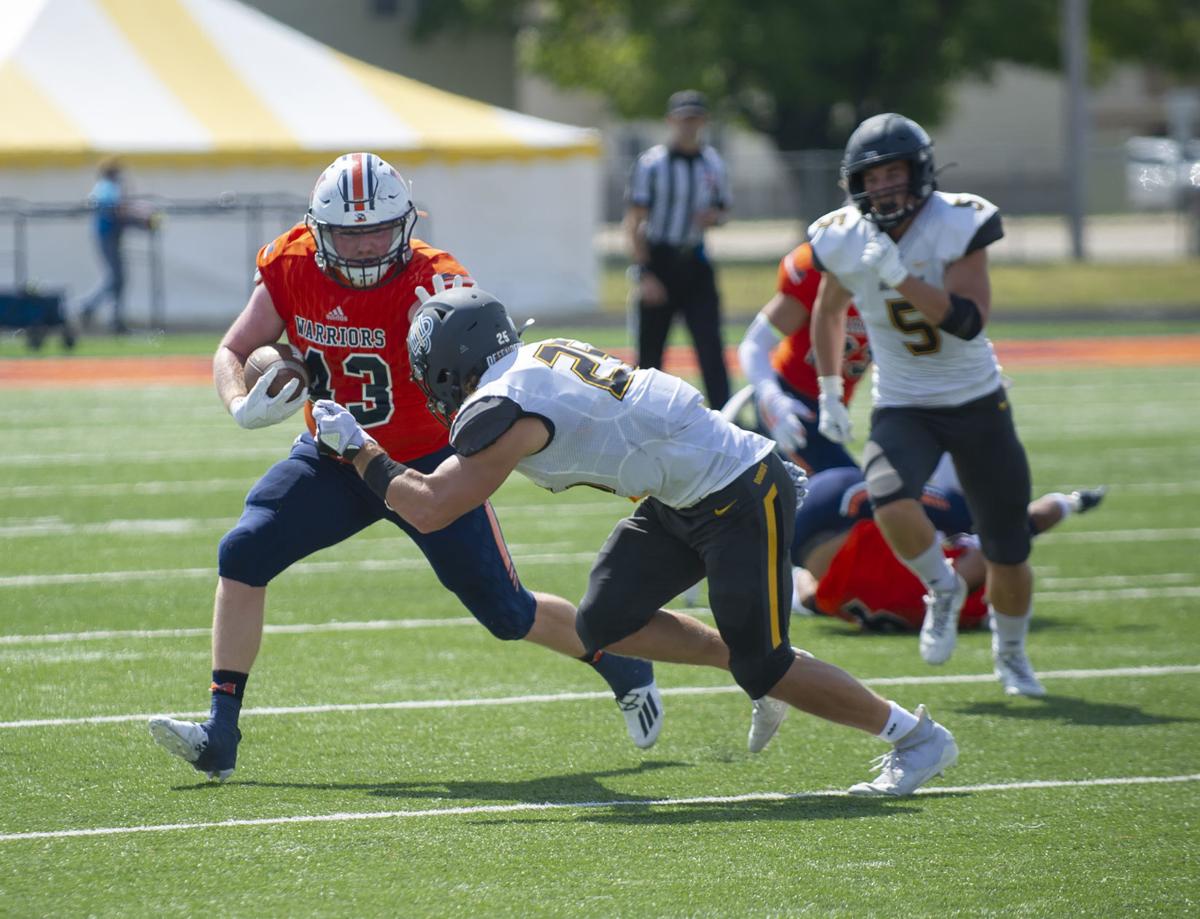 Midland linebacker Zach Acamo stiff arms a Dordt running back Carter Schiebout after intercepting a pass during the Warriors 22-14 loss to the Defenders Saturday at Heedum Field.

“Disappointing,” coach Jeff Jamrog said. “I would have never thought the score would have looked like that. Too many first game mistakes against a good opponent and we were our worst enemy today.”

The Warriors litany of mistakes cost Midland 23 possible points as they had a successful two-point conversion called back on a flag, failed to convert a first and goal from the nine-yard line, dropped a touchdown pass at the end of the first half and had a touchdown called back on a hold while also giving up a safety.

“Lot of first game mistakes against a quality opponent and you’ll get exposed and today those mistakes got exposed,” Jamrog said.

Dordt broke through a sluggish first quarter for both sides with a six-yard scamper by quarterback Noah Clayberg to go up 7-0.

The Warrior offense struggled to find any sense of rhythm in the opening quarter with EJ Stewart at the quarterback spot, picking up just two first downs in the first 15 minutes of action.

The highlight of the first half for the Warrior’s offense came on the following series.

Stewart found Darrin Gentry, who made an acrobatic catch, for a 71-yard strike to bring the Warriors within a score.

Midland converted the two-point try after the score with reserve quarterback Will Wagner finding an open wide receiver in the end zone. The successful try was called back on an illegal man down field, leaving the Warriors to settle for the point after attempt and a 14-7 deficit.

Midland linebacker Zach Acamo gave the Warriors a shot to tie the game, coming up an interception returned to the Dordt 49.

The Warriors got down to the Defender’s 29 before four straight plays resulted in no yardage gained.

The Midland defense gave the Warrior offense three more shots to tie the game in the last eight minutes of the half, resulting in two turnovers on downs and the end of the half.

On the final play of the half, Stewart hit linebacker Charles Barnes III, who is listed at 6’5”, in the end zone only for the ball to be batted out of his hands, leaving Midland trailing 14-7 at the intermission.

The Warriors got the ball to start the second half and turned the ball over on downs with four rushes for Keenan Smith resulting in just four yards.

River Walker, who started the game at tight end after battling for the quarterback spot in fall camp, took the helm of the offense, resulting in the .

“We knew that he would be a guy that would come in in the redzone and do some things, but it just turned out today that we thought he could give us a hot hand and a spark that we need and I thought he did that,” Jamrog said.

Walker started the day with back-to-back completions to Maximus Wold for 12 yards then put the Warriors on the Defender’s doorstep with a 24 yard run to the nine-yard line.

Midland’s offense stalled at the nine, managing just six more yards before Walker threw an interception to end the drive on fourth and three.

Dordt drove 84 yards on six plays before Midland’s Chase Lipsys jumped on a fumble forced by Acamo at the Midland six-yard line to keep.

The Warrior’s offense couldn’t move out of the shadow of their goalposts after the fumble, then had the snap to punter Matt Jurgensmier dribble out of bounds for a safety, making it 16-7 at the 2:44 mark of the third quarter.

Midland nearly had an immediate answer after getting a stop on Dordt’s extra possession as a screen pass to Smith from Walker went for 35 yards and touchdown on second down, only for the play to be called back on a hold in addition to an unsportsmanlike conduct flag in celebrating the score.

The Warriors couldn’t duplicate the score after facing first and 45, giving the ball to the Defenders on a turnover on downs at the Dordt 49.

The Defenders went 51 yards on eight plays with Carter Schiebout polishing off the drive with a 15-yard run for the touchdown, setting the score at 22-7 after a blocked PAT by the Warriors.

Midland managed an answer to bring the game back to a one-score deficit with a five-play, 75-yard drive ending in a 31-yard Austin Harris touchdown reception from Stewart with 4:02 left in the game. Walker, who accounted for 35-yards of the drive with his legs, came off after taking two heavy hits to end his runs of nine- and 25-yards.

Dordt managed to run off all but three seconds of the final 4:02 but Midland’s last play ended in a fumble as the Warriors tried to lateral the ball up the field.

Midland finished the day with 388 yards of total offense.

“We were kind of thinking our offense could put up 42 today, I was not expecting 14, so hopefully we can get some things fixed because you have to be able to run the ball and that was probably one of the most disappointing things,” Jamrog said.

Smith led the rushing attack with 63 yards on 15 carries while Walker amassed 58 yards on eight carries.

Gentry and Harris both hauled in four passes with a score with Gentry amassing 89 yards to Harris’ 79.

Clayberg, a former defensive back at Iowa, provided the majority of the offense for Dordt.

The former Iowa Gatoraid Player of the Year accounted for 83 rushing yards on 22 carries and a touchdown while also throwing for 66 yards and a score. Clayberg also caught a pass and handled the punting duties, averaging 41 yards per punt.

“I thought we held him in decent containment, certainly wasn’t as good as last year, but you know he’s going to pop some things,” Jamrog said.

Dordt finished with 328 yards of offense, rushing 196 yards on 50 carries.

“They were able to rush the ball,” Jamrog said. “We knew they would be to a certain extent.”

The Mustangs are coming off a 45-31 win over Northwestern in week one.

Midland survived a second half surge by Hastings to pick up its second GPAC win, beating the Broncos 82-78 Wednesday night.

Midland University’s women’s basketball team continued its winning ways, pushing their streak to three-straight with a 75-49 win over Mount Ma…

The Warriors were held to their lowest scoring output in the last six years in a 63-49 loss to Mount Marty Tuesday night on the road.

The Midland team swept all three of the GPAC weekly awards with Taliyah Flores, Hope Leimbach, and Jaisa Russell each being highlighted.

On Monday, the Big Ten canceled this week's Northwestern-Minnesota game. By not playing, Northwestern essentially clinches the Big Ten West. We could spend several sentences explaining, but we'll settle for this: It's 2020.

Jim Souhan: Stop playing college basketball games, delay the season and give us May Madness instead

The Minnesota women's basketball team will begin its season on Wednesday with seven players who are healthy and available.

Midland wide receiver Darrin Gentry hauls in pass during the Warriors 22-14 loss to Dordt Saturday at Heedum Field. Gentry scored on the play.

Midland linebacker Zach Acamo stiff arms a Dordt running back Carter Schiebout after intercepting a pass during the Warriors 22-14 loss to the Defenders Saturday at Heedum Field.