Randy Gregory spotted the man a head start. Not intentionally, mind you. But now that he had, Gregory knew he had no option but to catch him.

It was a play from last Saturday's Nebraska-Illinois game. First quarter. Illinois leaked tight end Jon Davis out into the flat for a little pass that appeared ready to turn into a monster play.

Hard-charging Gregory, the Huskers' sophomore defensive end with the motor that never burns out, had lost track of Davis in his ambition to hit the quarterback.

“I was supposed to be on him,” Gregory said of Davis. “I knew I just had to run as fast as I could.”

For a split second, the play looked as if it might be a 75-yard touchdown. It did not. Gregory tracked down Davis after just 16 yards.

It was quite a sight, really, watching a defensive lineman overcome his own error in a matter of seconds. In one play, both the inexperience of Gregory and the brilliance of his athleticism appeared at the same time.

“I think I tend to do that a lot,” Gregory said with a laugh when asked about it after the game. “That’s why Kaz gets on me. The biggest thing he says is to keep playing, play fast.”

If defensive line coach Rick Kaczenski shows some occasional tough love to Gregory, it’s because he sees how high the ceiling can be for the 6-foot-6, 235-pound end. You could argue that Gregory is already perhaps Nebraska’s most impactful defender after arriving on campus just days before fall camp.

“I’ve never had a guy like that with as much natural ability,” Kaczenski said of Gregory a few weeks ago.

And that was no minor compliment, considering Kaczenski coached some NFL draft picks at Iowa, including first-rounder Adrian Clayborn.

With six tackles for loss, Gregory has already made a splash at NU. But he and Kaczenski know there is more out there, including some sacks to add to his stat sheet.

Despite his consistent harassment of quarterbacks and team-leading seven QB hurries, Gregory has been credited with just half a sack so far.

The sacks will come. Kaczenski is most interested in pushing Gregory to be “a complete player” and master consistency. In that regard, the coach said the Illinois game was “the best game he’s played overall.”

Still, there are more details he wants Gregory to conquer.

“Like trailing the ball, from the backside you can’t run below the defense. You’re the last line of defense,” Kaczenski said. “We don’t want you to make the play unless the ball reverses back to you. Just understanding those responsibilities. And he gets those. It’s just having them play after play after play. Having that discipline.”

Gregory, it seems, comes with a battery forever charged.

“He’s not a guy that gets fatigued,” Kaczenski said. “He can run all day long.”

There was a time when Gregory was committed to the Boilermakers. Growing up just about 75 minutes from the Purdue campus, he says he attended at least six or seven Boilermaker games while attending high school in Fishers, Ind.

He liked how Purdue used its defensive ends, and was a particularly big fan of Ryan Kerrigan, who was drafted as the 16th overall pick in the 2011 NFL draft by Washington.

“I would always go to the games to see him play and always envisioned myself out there,” Gregory said. “Just the fact that it was an in-state school and all my friends and family could see me play.”

So he committed to Purdue, and was still planning to go there while playing junior college ball at Arizona Western Community College.

But things can turn quickly. While there, Gregory got a call from Kaczenski. It was a good enough conversation that the defensive end scheduled an official visit to Lincoln.

While on his visit, Gregory wanted to commit to Nebraska on the spot, but held off until he could talk to the Purdue staff.

That Purdue staff, led by Danny Hope, had far greater issues to deal with at that point.

“Lucky for me, the staff got fired that same weekend and kind of made it easier for me,” Gregory said.

The Boilermakers never made a serious push to get Gregory to come back their way after new head coach Darrell Hazell was hired.

Gregory said it would have been a longshot to change his mind at that point anyway.

But he hopes Hazell turns the program around on all those Saturdays but the ones when Purdue plays Nebraska.

And Gregory is excited to revisit the campus he spent those Saturdays at as a high schooler.

He’ll say his hellos, then spend the next three hours trying to be a nuisance. All the better for him if he puts a few hits on true freshman quarterback Danny Etling.

Yes, that would be a pretty good homecoming.

“I want to get after every quarterback,” Gregory said. “But the fact that he’s a freshman I think kind of makes it a little more fun for us and hopefully we can rattle him a little bit, hit him a few times, shake him up and make him uncomfortable.” 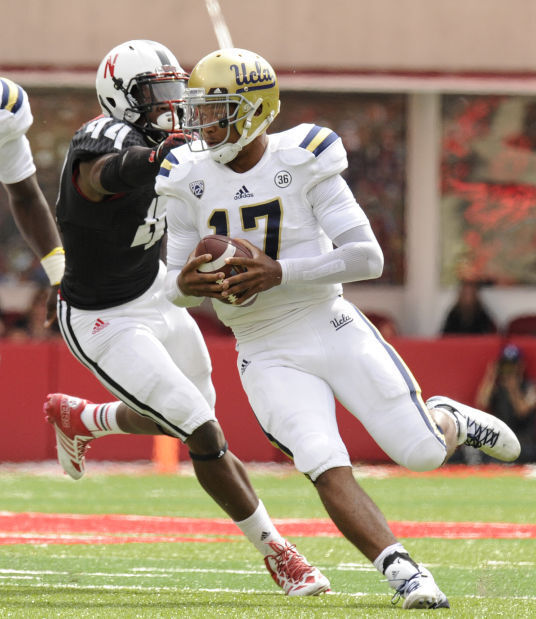 Nebraska defensive end Randy Gregory (44) misses a grab at UCLA quarterback Brett Hundley (17) in third-quarter action during a game last month at Memorial Stadium. Gregory, who originally committed to Purdue, is eager to face the Boilermakers on Saturday.