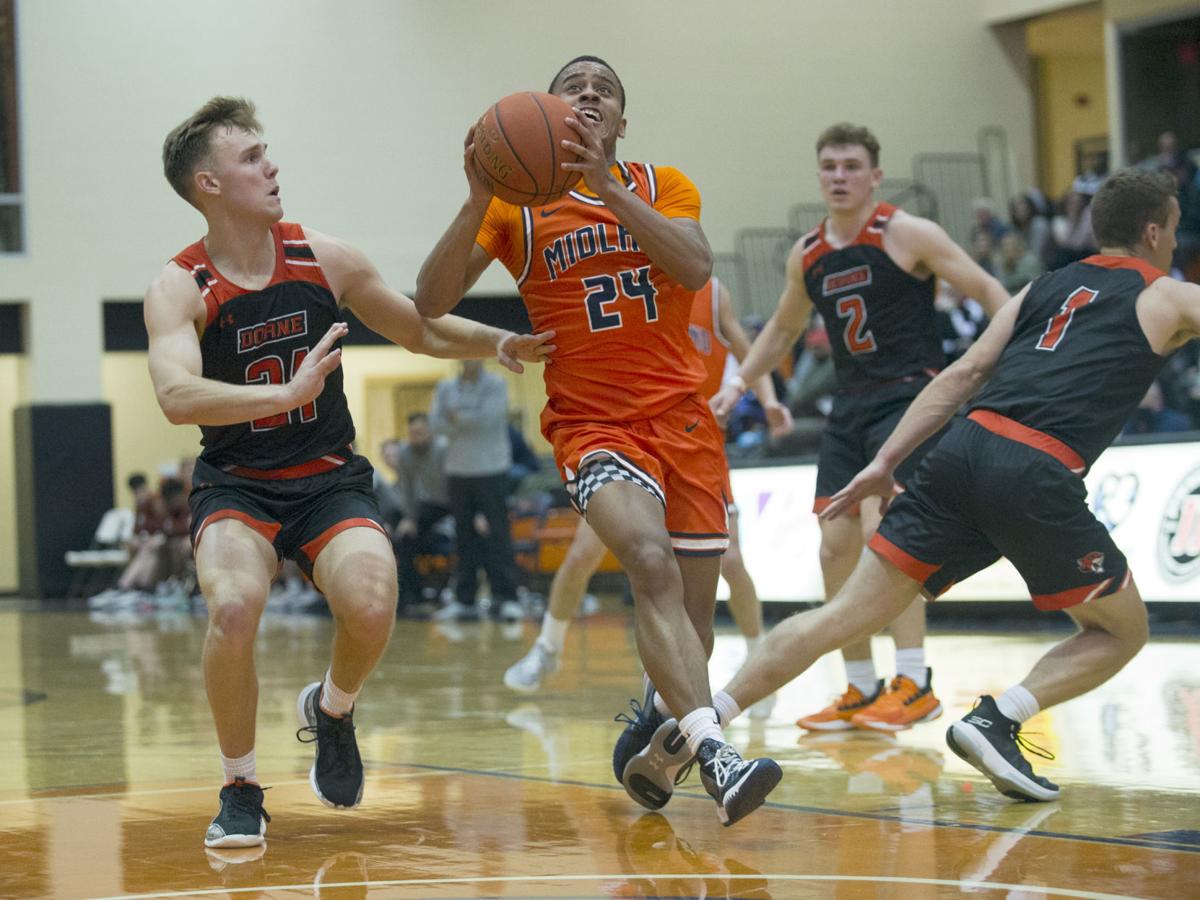 Midland's Laurence Merritt drives to the basket in the second half of the Warriors 71-61 win over Doane Wednesday. 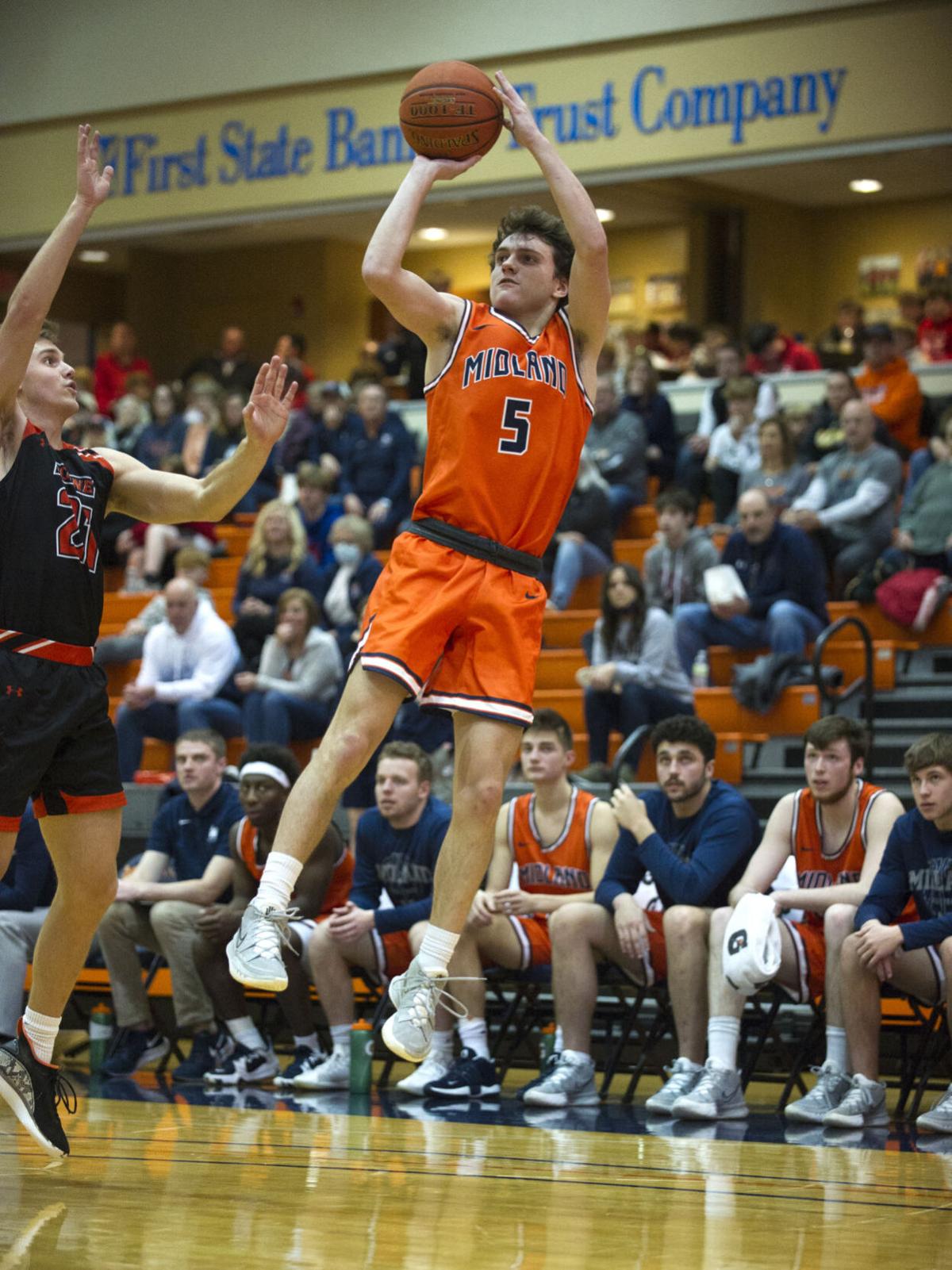 Midland's Jake Rueschhoff takes a jump shot in the second half of the Warriors 71-61 win over Doane Wednesday.

The Warriors have now won six of their past seven meetings with the Tigers and lead the series 21-10 since 2006.

Doane came into the contest with the top defenses in the conference, ranking first in points points allowed and second in opponent field goal percentage.

Midland’s hot offense lifted them to a 15-point advantage by the 6:37 mark of the first half. In the first period, they shot 16-of-32 including 5-of-9 from behind the arc. The Warriors led 37-27 at the intermission.

The second half was a much more physical contest with the two sides combining for almost as many fouls (21) as made field goals (23).

The Midland lead grew to as high as 18 points halfway through the period but was dwindled to just 9 points at the 1:42 mark.

That’d be as close as the Tigers would get as the Warriors fought off the last ditch comeback effort.

Off the bench, Tyler Sandoval contributed 12 points and 6 rebounds and Ryan Larsen added 10 points while shooting 3-of-4 from behind the arc.

“It was a good ‘business-like’ win for us tonight,” stated head coach Oliver Drake. “In a couple of our wins of late, we’ve had a breakout performance from one of our guys. Tonight, it was a solid team win. Every one of our guys contributed in one way or another.”

The last time these two met at the Wikert Event Center, the Warriors lost a heartbreaker, falling 77-73 in the final minute of the game.

Midland snapped a four-game losing skid with a 63-52 win over Mounty Marty Wednesday at the Wilkert Event Center.

The No. 21 Midland men’s hockey team took the ice on the road at McKendree University, securing a weekend sweep with a 5-1 win on Friday and 8…

Midland University’s bowling teams were back on the lanes this past weekend competing in the Kegel Collegiate Classic.

Warriors fall in OT to Tigers

Midland dropped it’s second-straight game by a possession, falling 79-76 in overtime on the road at Dakota Wesleyan.

Georgia won its first national title in 41 years, defeating Alabama 33-18 in the College Football Playoff championship. The Bulldogs shot down the top-ranked Crimson Tide in a fourth quarter rally. Here's the latest, in photos.

Casey Thompson has officially committed to the Huskers, but are his teammates ready for a new QB1 to run the show? Steve Sipple and Sam McKewon debate how the Texas transfer will fit in in Lincoln on the latest episode of the Sip ‘n Sam Showdown. For the full episode, subscribe at http://www.huskerextra.com/SnS. Support the show: https://huskerextra.com/ See omnystudio.com/listener for privacy information.

Midland's Laurence Merritt drives to the basket in the second half of the Warriors 71-61 win over Doane Wednesday.

Midland's Jake Rueschhoff takes a jump shot in the second half of the Warriors 71-61 win over Doane Wednesday.