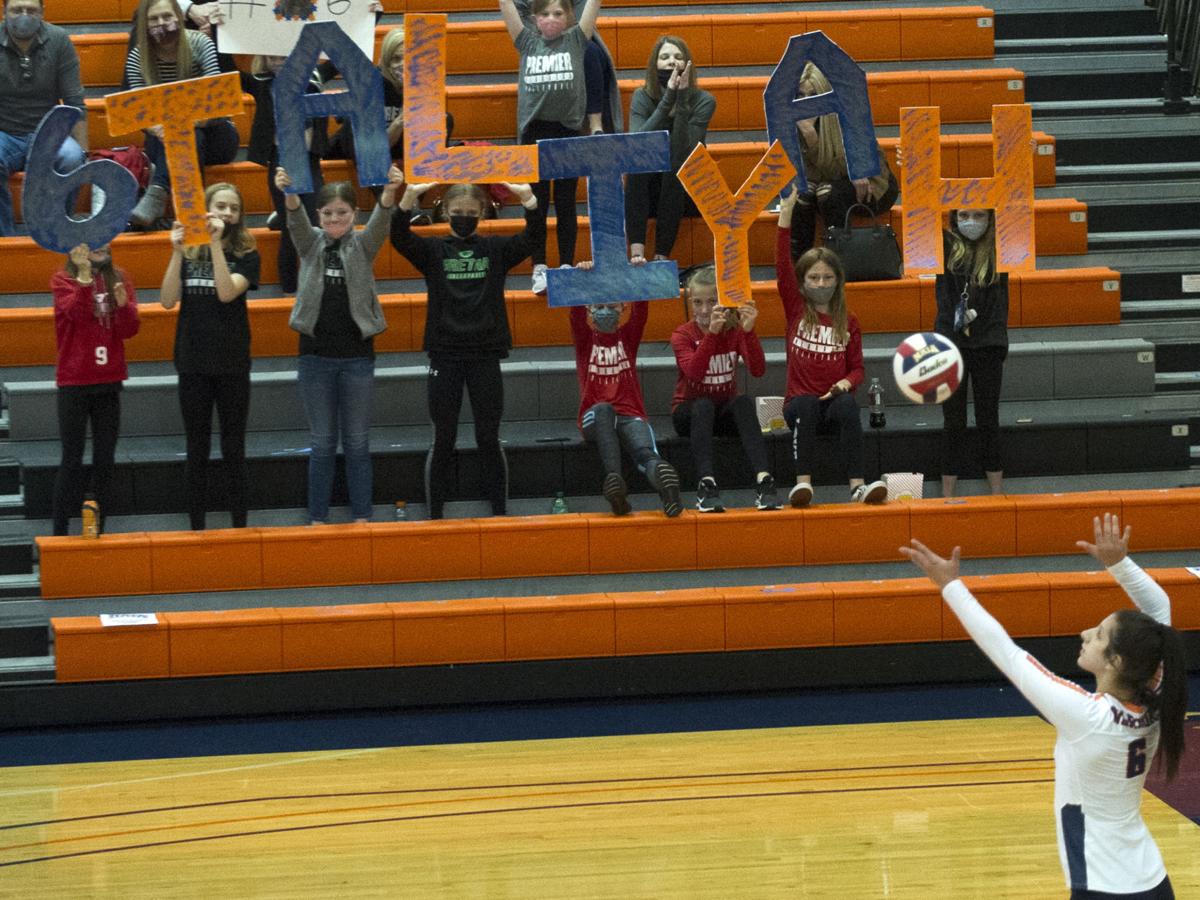 Fans hold up signs that spell out "6 Taliyah" while Midland's Taliyah Flores serves Saturday during the opening round of the NAIA Tournament. Flores led the Warriors to a 3-0 sweep of Mayville State with 15 kills. 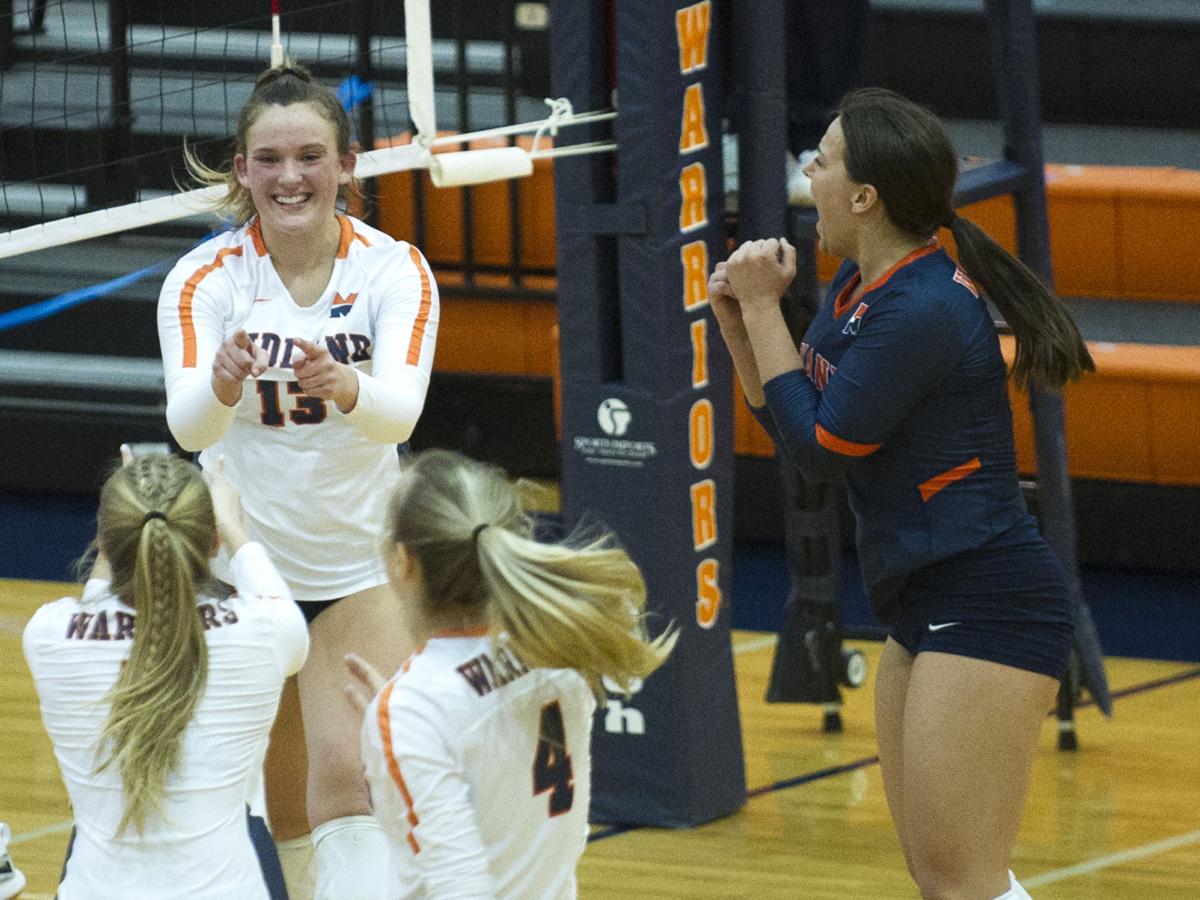 Midland's Brooke Fredrickson points to Hope Leimbach after a point during the Warriors 3-0 sweep of Mayville State Saturday.

For the seventh time in eight years, Midland volleyball is headed to final site of the NAIA national tournament after sweeping Mayville State 3-0 (25-23, 25-17, 25-21) in front of a home crowd Saturday.

The Warriors were left out of the dance in 2019 after failing to secure an at-large bid, snapping a streak of six-straight national tournament appearances, and that struck with Midland as they battled through the adversity of the 2020 season.

“It’s been their goal from the day over a year ago when they made the selection show and we were left out,” Midland coach Paul Giesselmann said. “That was something that our returning players have not forgotten and they were going to be driven not to just get into the national tournament, but they wanted to get to Sioux City.”

The Warriors only trailed once in the three sets—an opening point kill by the Comets in the final set—jumping out to big leads in each set. Mayville, who was playing in the program’s first national tournament game, was one of the few teams across the national to play more than 30 games this year.

“I was not expecting us to sweep this team because they were playing at a really high level, but I really had a great sense of how we were playing this spring,” Giese

An ace by Taliyah Flores broke open set one, giving the Warriors a 9-3 advantage.

The junior led the Warriors offense, putting down a team-high 15 kills.

“When you get to this point in the season, you need your best players to play like great players and you saw that today out of Taliyah,” Giesselmann said.

Midland held it’s six-point advantage for most of the set until the Comets rallied to tie the game at 22-all.

A kill by Brooke Fredrickson put the Warriors back in front for good. Sydney Morehouse, who finished with nine kills, secured the final two points to give Midland the early 1-0 advantage.

A four-point run sprung Midland to a 6-1 advantage in the second set. The Comets would come no closer the rest of the way as the Warriors cruised to the cusp of the sweep.

The third set featured the closest action of the afternoon as Mayville got within two late at 20-18.

A three-point swing for the Warriors aided by back-to-back kills from Lauryn Samuelson, who finished with nine kills, gave Midland the cushion needed to close out the game.

The Warriors move to 12-9 on the year with the win.

Midland finished with 51 kills while hitting .208 for the match compared to 25 kills and a .078 efficiency for Mayville.

The final stop on the 2020 season will be Sioux City, Iowa and the Tyson Event Center were Midland and 23 other teams from across the nation will battle for the national championship. The GPAC will be well represented as all five qualifiers from the conference won their opening round match-ups.

Three-team pool play will begin on April 27 and finish on April 28. The eight pool play winners will return to a single elimination tournament on April 29 through May 1, a change from the previous year’s tournaments.

“I love the new format,” Giesselmann said. “We obviously had a ton of success with the old format, but I think this format is much better for the health of the student athletes.”

Midland’s Dylan Kucera was named the GPAC Men’s Outdoor Track and Field Athlete of the Year.

Midland softball’s bats were quiet on the opening day of the GPAC tournament, scratching across three runs to top Briar Cliff 3-0 in the openi…

The Midland softball team bounced back to rattle off three wins Thursday to secure a spot in the GPAC tournament championship series.

Midland’s Taliyah Flores and Hope Leimbach earned All-American status as the yearly awards were announced by the NAIA Tuesday.

Midland University’s first season of women’s flag football came to a close this past weekend at the NAIA Invitational Showcase in Atlanta, Geo…

Scott Fowler: Roy Williams laughs off another bogey. This is retirement, and he’s loving it.

This is what retirement looked like for former North Carolina basketball coach Roy Williams on Wednesday:

The longest volleyball season in NAIA history needed all five sets to decide its national champion.

The Midland baseball team’s season came to a close on Saturday in a doubleheader split with Dordt.

Fans hold up signs that spell out "6 Taliyah" while Midland's Taliyah Flores serves Saturday during the opening round of the NAIA Tournament. Flores led the Warriors to a 3-0 sweep of Mayville State with 15 kills.

Midland's Brooke Fredrickson points to Hope Leimbach after a point during the Warriors 3-0 sweep of Mayville State Saturday.