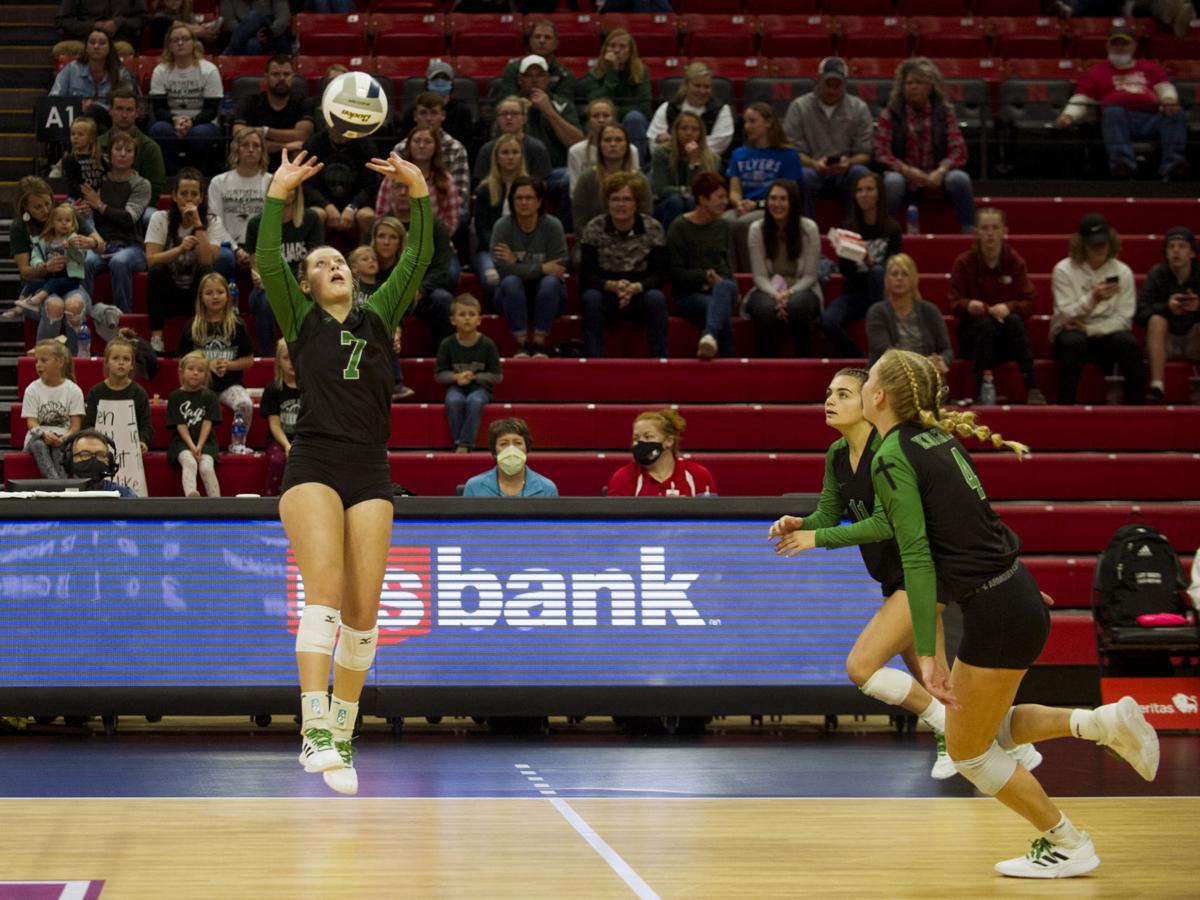 Bergan's Rebecca Baker sets a ball during the Knights 3-1 loss to Howells-Dodge in the Class D-1 state championship game Saturday. 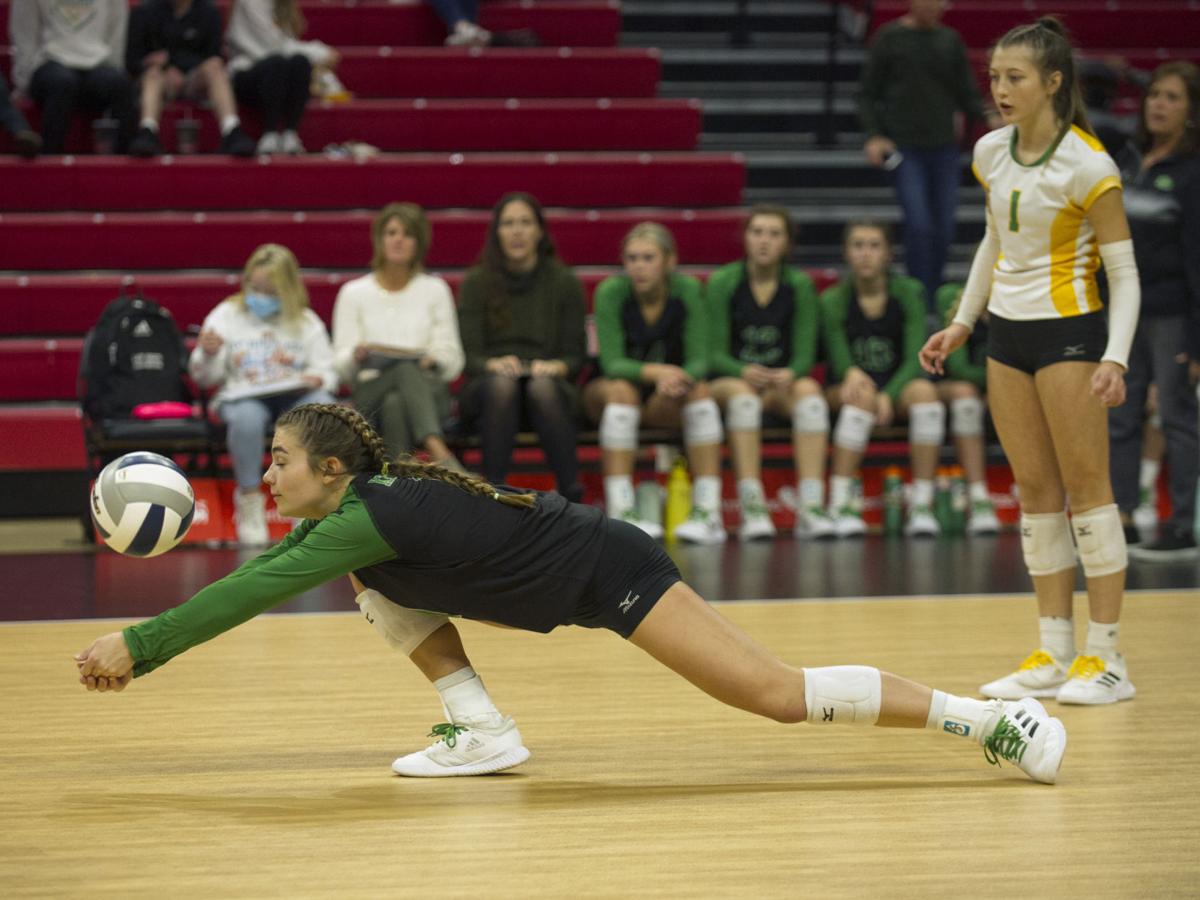 Bergan's Carlee Hapke dives for a dig during the Knights 3-1 loss to Howells-Dodge in the Class D-1 state championship game Saturday. 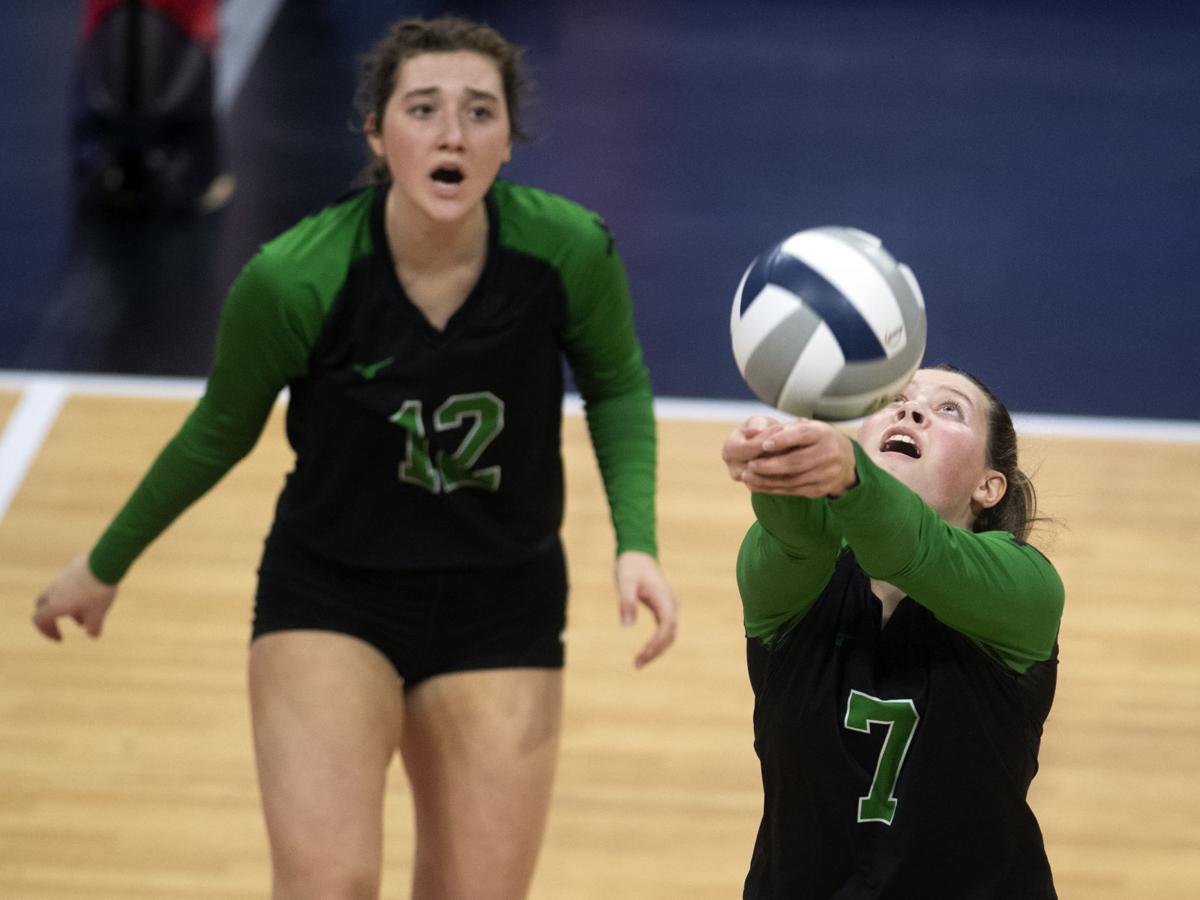 “They gave up the first one, we gave up the second one and then it was a battle,” said Bergan coach Sue Wewel.

In all but the second set, the Knights built up a sizable lead to start things off.

In the opener, it was 16-11 after both sides exchanged blows out to a 9-9 tie. A block and an ace by Kennedy Bacon gave Bergan its first edge at 11-9.

The Knights kept the Jaguars at bay the rest of the set, trading points before Bergan closed it out with a block—the Knights finished with 14 in the loss.

The second set was all Howells-Dodge with the top seeded Jaguars storming out to 12-7 lead and never looking back.

In the third and fourth sets, Bergan was unable to finish what they started, giving up leads of five- and six-points in back-to-back sets.

“We were trying to run more middle attacks and we had to pass better because they had the big ol’ blockers on the outside,” Wewel said. “We were trying to run some strategy hitting over the little block in the middle and if our passes were just a little bit better in those rotations it would have been fine.”

Bergan flushed the second set quickly, staking out a 9-5 advantage. The Knights held the lead until the Jaguars pulled in front 23-22.

Bergan survived two set points to tie the score at 24-24, but the Jaguars completed the comeback effort with back-to-back points to take a 2-1 match lead.

The final set of the season had the same pacing. Bergan produced a 13-6 lead only to get outscored 14-7 by Howells-Dodge to tie the set at 20-all.

The Jaguars closed out the match by outscoring Bergan 5-1.

All but one player will be back for Bergan next fall with the only loss being the graduation of Bacon, who finished with eight kills and all three of Bergan’s aces.

“Kennedy has come a long ways and we are just excited that she has been a part of our program,” Wewel said. “She did a great job of moving the ball, trying to hit different areas and she got up big on the block for us.”

Bergan finishes the year with a 27-11 record and their third consecutive runner-up placement.

“I said from last spring that this group was a state championship contender and I never backed down from that,” Wewel said. “You’re always going to have your glitches during the year, but we found a way to come together and have a great time.”

See which students were named to the honor roll at Archbishop Bergan Catholic School.

Bergan's Rebecca Baker sets a ball during the Knights 3-1 loss to Howells-Dodge in the Class D-1 state championship game Saturday.

Bergan's Carlee Hapke dives for a dig during the Knights 3-1 loss to Howells-Dodge in the Class D-1 state championship game Saturday.