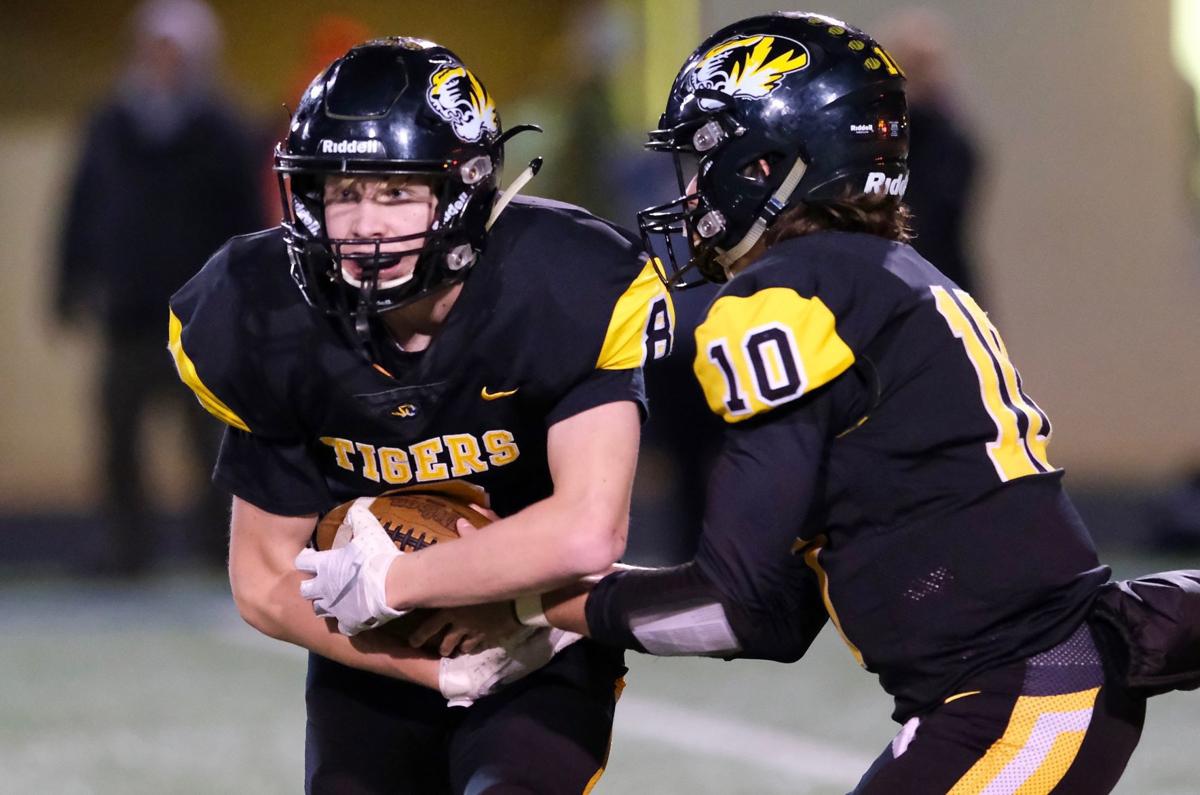 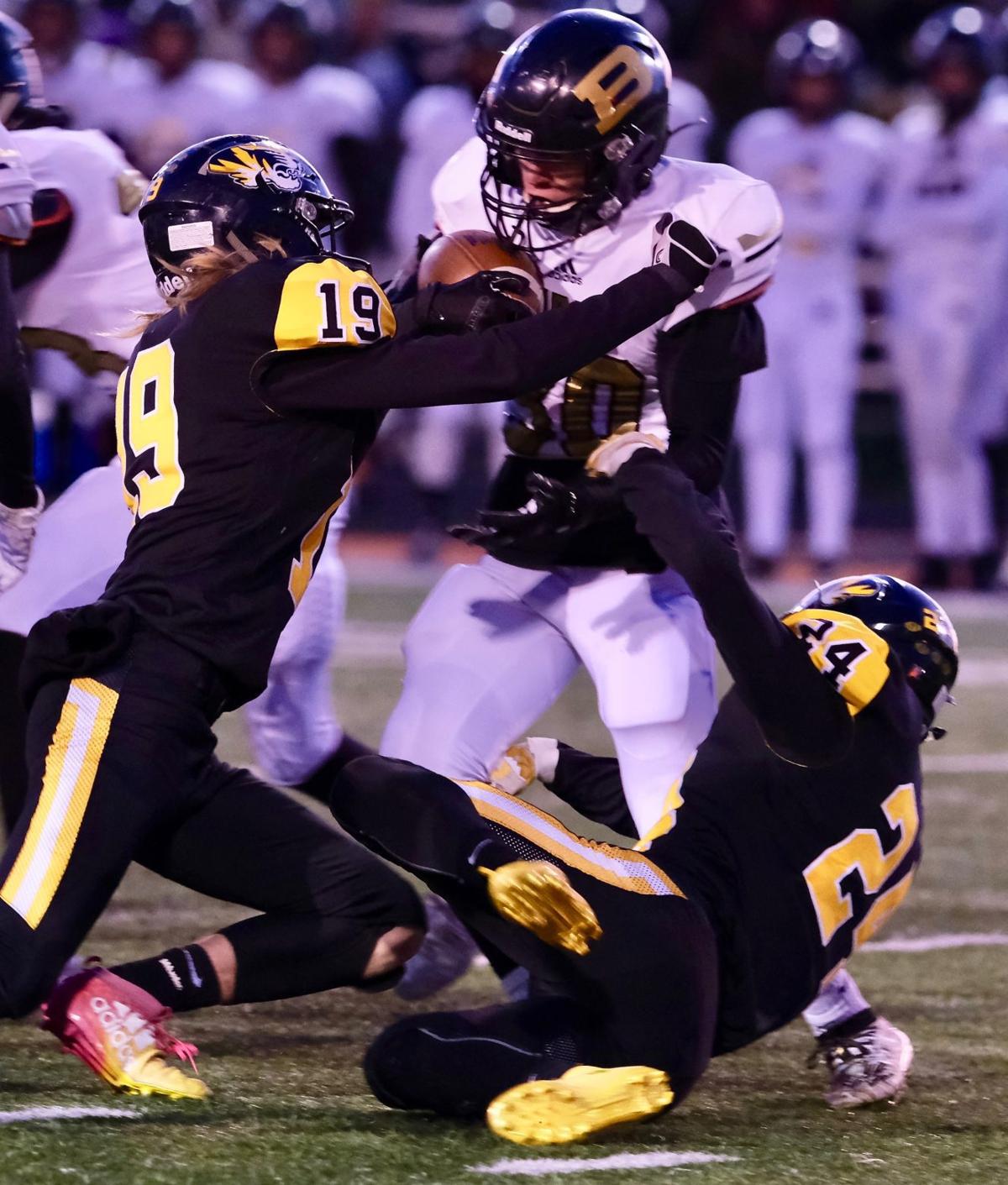 Heedum Field was a paradise for fans of high-powered offenses Friday night.

Fremont High School and Class A’s fourth-ranked Omaha Burke combined for more than 1,000 yards in total offense as the Bulldogs downed the Tigers 59-35.

The Bulldogs used the running of Jaylon Roussell to pull away in the second half. Roussell, who finished with 354 yards on 22 carries, had touchdowns runs of 74, 67, 37 and 24 in the second half to help Burke improve to 6-1.

The Bulldogs built a 27-21 halftime lead on the strength of three TD receptions by Notre Dame recruit Xavier Watts. The all-stater finished with 190 yards receiving on five catches, including one second-half TD.

“We just couldn’t stop them,” Fremont coach Seth McClain said. “Offensively, I think Burke and (top-ranked) Bellevue West have to be the most talented. After watching film, I they they are more talented than they were last year offensively. If you load up on the run, they absolutely torch you with the pass. If you take guys out on the pass, they kill you with the run. How No. 7 (Roussell) doesn’t have more (college) offers is beyond me.”

The Tigers struck first as they drove 66 yards in 11 plays. Dawson Glause, who finished with 195 yards receiving on six catches, hauled in a 16-yard reception from quarterback Jack Cooper on fourth-and-six to keep the march alive. Senior Carter Newill’s 1-yard run and Valentin Ventura’s conversion kick made it 7-0 with 8:12 left in the first quarter.

Watts gave Burke the lead when he hauled in TD receptions off 52 and 44 yards from quarterback Reid Burke. The second put the Bulldogs up 13-7 with 2:22 left in the first quarter.

“Their quarterback has an absolute cannon for an arm and Watts is as good as advertised,” McClain said.

Cooper and Glause connected on a 55-yard pass that helped set up Micah Moore’s 1-yard TD run on the first play of the second quarter. After Burke punted, Moore’s running helped the Tigers move 41 yards in seven plays. The 10th-grader culminated the drive with a 15-yard scoring run. Ventura’s PAT put FHS up 21-13 with 8:23 left in the half.

Moore finished with 138 yards rushing on 29 carries. Cooper, a junior, was 17 of 31 passing for 259 yards and no interceptions.

“Coach (Tony) Weinandt does a phenomenal job of calling plays and we have some playmakers,” McClain said. “Glause is a player and Micah Moore is a skinny little sophomore, but he runs hard and our line did a nice job of blocking. Burke shut out their last two opponents (Elkhorn 28-0 and Gretna 33-0) so it was a great effort by our kids.”

Watts’ 18-yard TD reception cut the Tigers’ lead to 21-19. Burke went ahead with 1:08 left in the half on Brayden Pommier-Williams’ 4-yard TD run and a successful two-point conversion.

The Tigers forced a three-and-out on Burke’s opening series of the third quarter. Fremont drove to the Bulldogs’ 26, but turned it over on downs. On Burke’s next play, Roussell got free for a 74-yard TD.

“That is just a kid making a play,” McClain said. “They did a nice job blocking out there for him, he saw a lane and we missed a couple of tackles. He is hard to bring down.”

Cooper, though, helped the Tigers respond. He had an 8-yard pass to Conner Richmond and a 23-yard strike to Glause to help set up Moore’s 6-yard TD with 7:35 left in the third period.

After Watts struck again on a 73-yard touchdown reception with 6:44 left in the third quarter, Cooper found Glause on a short pass on the west sideline. Glause took it the distance to complete the 77-yard scoring play.

“Jack has improved so much,” McClain said. “He is a blast to coach and is a natural born leader. Having him at quarterback brings back the days of Riley Harms (now at the University of Nebraska at Kearney). With him, we are never out of the game. We have guys he can get the ball to and the line does a great job.”

Glause’s TD cut the deficit to 39-35, but Burke kept the Tigers out of the end zone the rest of the way while Roussell added three TD runs.

The loss drops the Tigers to 3-4, but there are still hopes for a winning season and a possible playoff berth with two games left.

“Burke has remarkable athletes, but this wasn’t from lack of effort,” McClain said. “Our kids tried their tails off. I was extremely proud of the way they played. We have nothing to hang our hats about. We have two games left and we can still do some great things. We just need to stay together, stay the course and keep getting better.”

Connor Stone and Seth Redding led the FHS defense with eight tackles apiece. Boone Gray and Newill had seven stops each. Watts had nine tackles, including eight solo, for the Bulldogs.

Game film traveled the internet to and from all parts in Nebraska Wednesday morning.

A look at Saturday's results from the pool.

Markowski, Aschoff too much for Fremont High girls

Not much could slow Alexis Markowski against Class A No. 7 Fremont on Friday night.