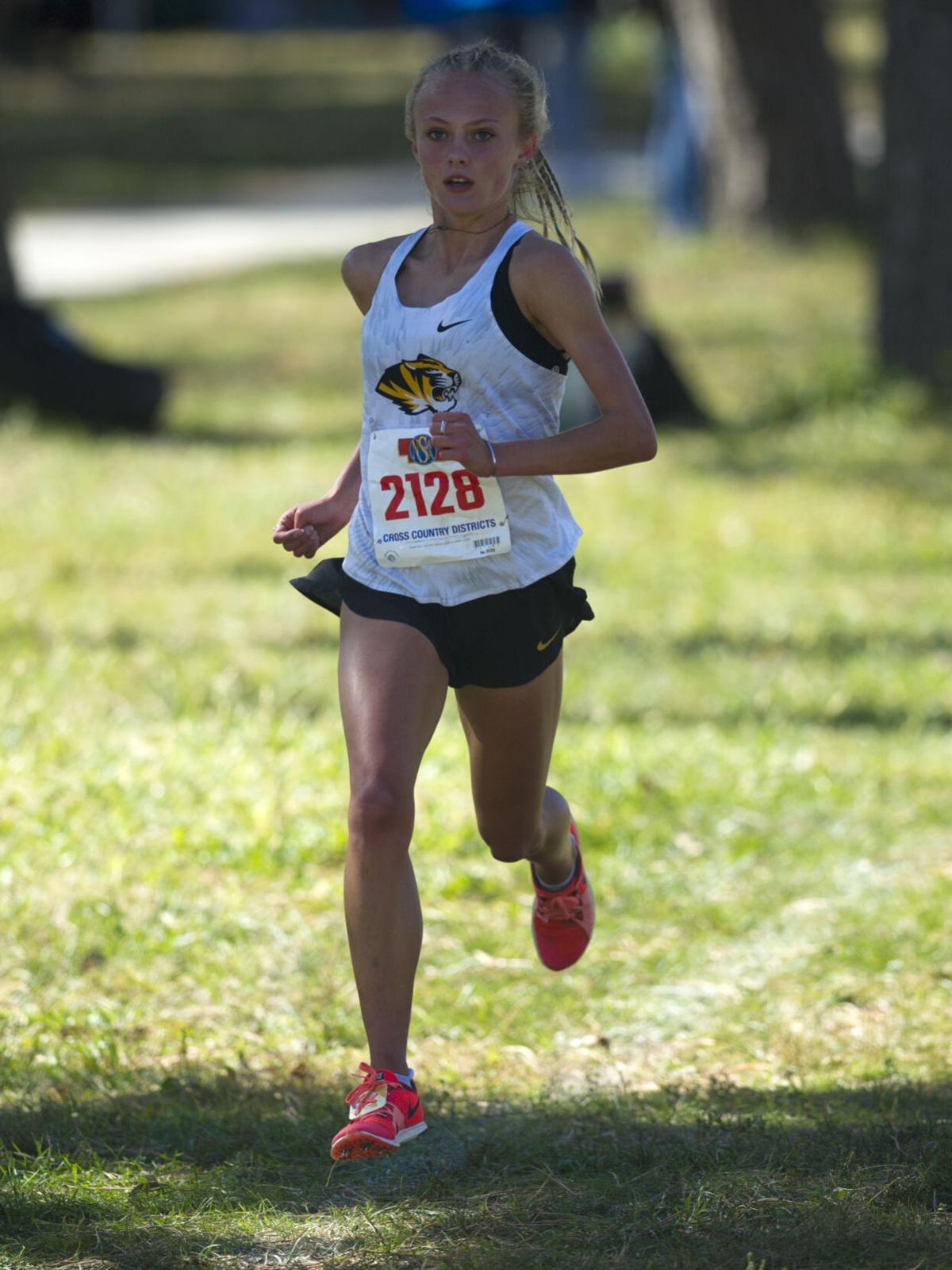 Fremont's Elli Dahl runs in the Class A-1 district race Thursday at Pioneers Park in Lincoln. Dahl won her third district title with a time of 18:30.57. 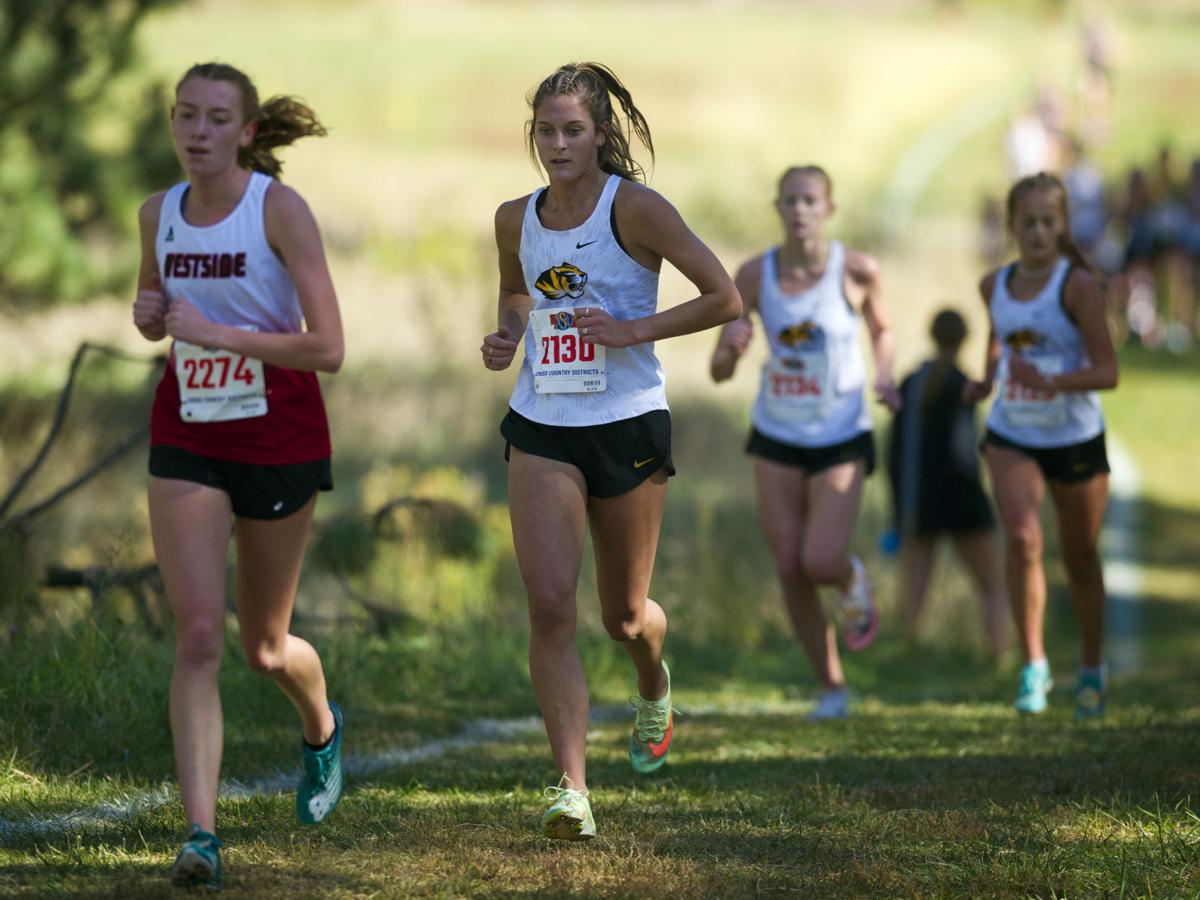 Fremont's Lucy Dillon makes a push to move up during the Class A-1 district race Thursday at Pioneers Park in Lincoln.

LINCOLN—Fremont’s Elli Dahl spent most of Thursday’s Class A-1 district race running by herself, a novelty for the senior who has been challenged, but never beaten this fall.

“It’s a different type of race,” Dahl said. “You have to be the one pushing yourself and it’s a lot easier when you have competition next to you, pushing you as you go. It’s definitely more mental when you are by yourself.”

“I went in knowing I was going to run my race and since I didn’t have as much competition, just go out fast and prepare for state,” Dahl said.

Dahl ran an 18:30.57 to take her third career district championship, beating runner-up Claire White of Westside by 18 seconds and the remaining field by 1:25.

“We fully believe she is going to get a lot of competition from other elite girls next week, but what we’ve tried to do is develop and practice all different types of races,” Fremont coach Jake Smrcina said. “We know there are parts next week where she could be by herself and that’s something that we wanted to practice a little bit.”

Fremont medaled six of its seven runners in the race to hold off runner-up Gretna by eight points and third place finisher Westside by 14 points in the team standings.

“You can easily sleepwalk through this and be caught napping. I think the Gretna girls are getting better every week and are scary next week and so are the Westside girls, so for us it was a chance to get back to some fundamentals and work on the things that have made us good.”

The Tigers’ fifth-straight district crown came down to the team work of Chloe Hemmer and Taylor McCabe.

The duo ran in lockstep for the majority of the race, finishing back-to-back in 13th and 14th to keep Gretna from inching closer in the team standings.

Lucy Dillon was the second Tiger across the finish line, pushing up to finish fifth in a time of 20:12.17.

Fremont will wrap up its season next Friday, Oct. 22, at the Class A state meet in Kearney. The girls race is slated to begin at 3 p.m.

No. 1 Bergan set a new school record for points in a game, scoring 69 points against Tekamah-Herman Friday in a 69-14 win.

Freshly minted No. 9 Fremont ran into its toughest challenge of the fall in No. 3 Lincoln Southwest Tuesday night, taking one set in dominant …

COLUMBUS—The Bergan girls golf team are enjoying their final rounds of the season, competing at the Class C state tournament at the Elks Count…

The Bergan cross country season came to an end Thursday at the D-1 district meet in McCool Junction.

NFL Week 6 Market: Will weather be a factor?

Fremont's Elli Dahl runs in the Class A-1 district race Thursday at Pioneers Park in Lincoln. Dahl won her third district title with a time of 18:30.57.

Fremont's Lucy Dillon makes a push to move up during the Class A-1 district race Thursday at Pioneers Park in Lincoln.