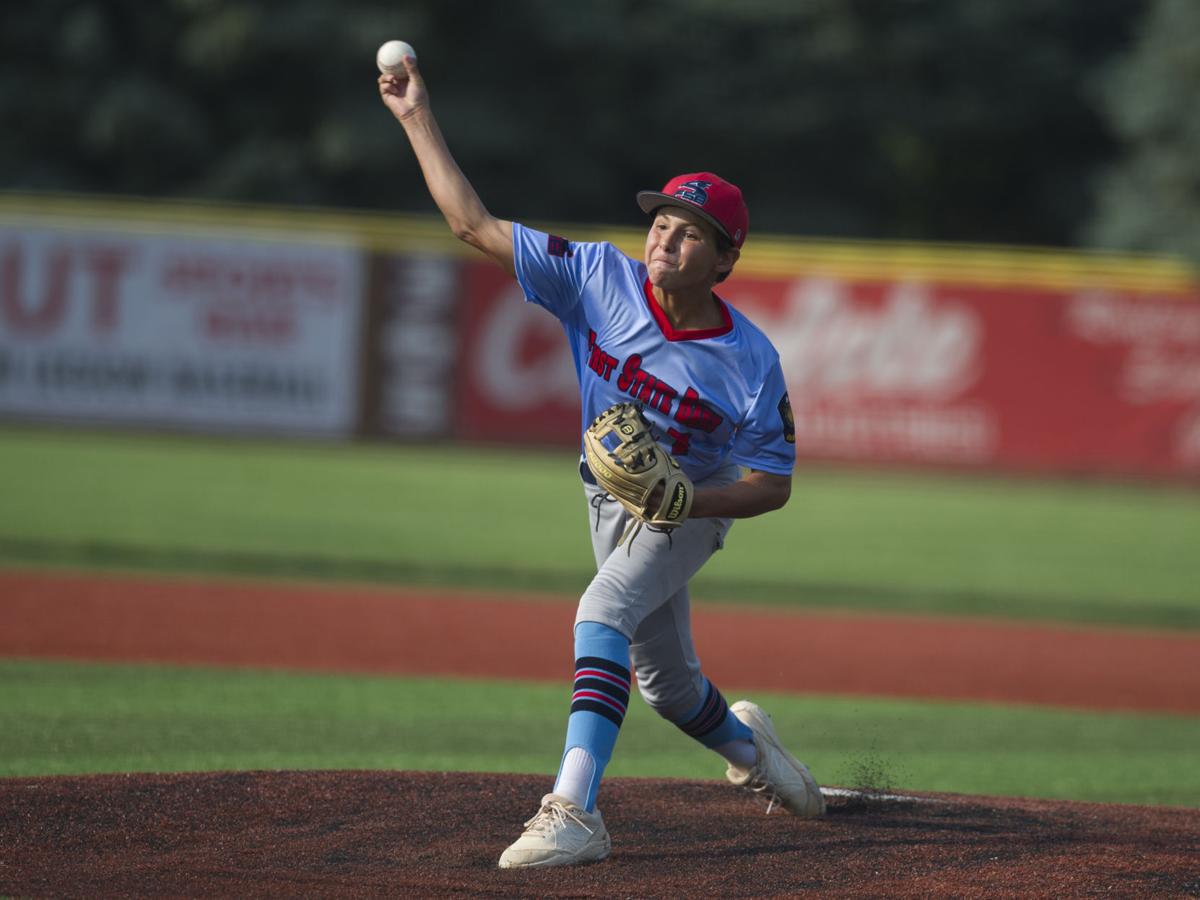 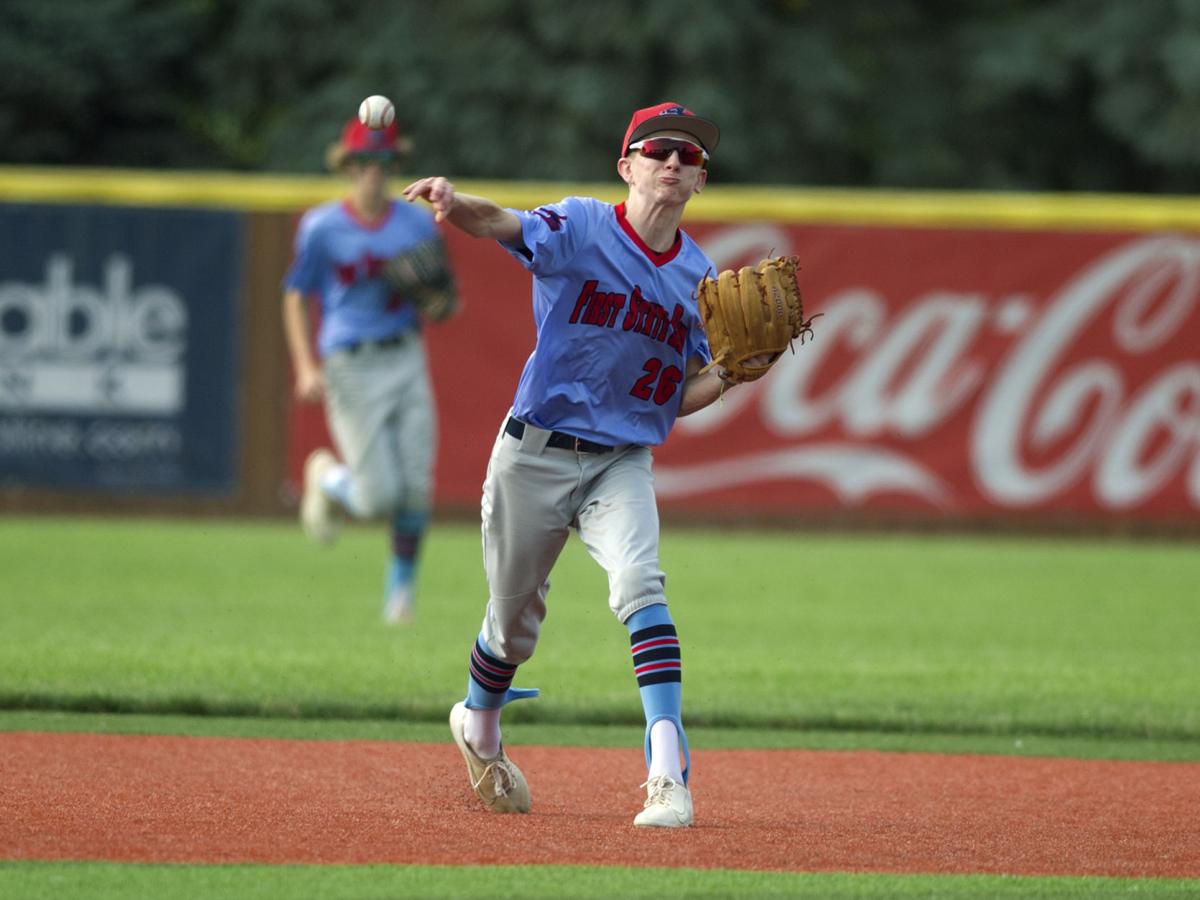 First State Bank Post 20 Reserves shortstop Liam Schmidt throws the ball across the infield for an out in the second inning of Post 20's 8-1 loss to Bellevue West in the American Legion Reserves state tournament championship game Wednesday. 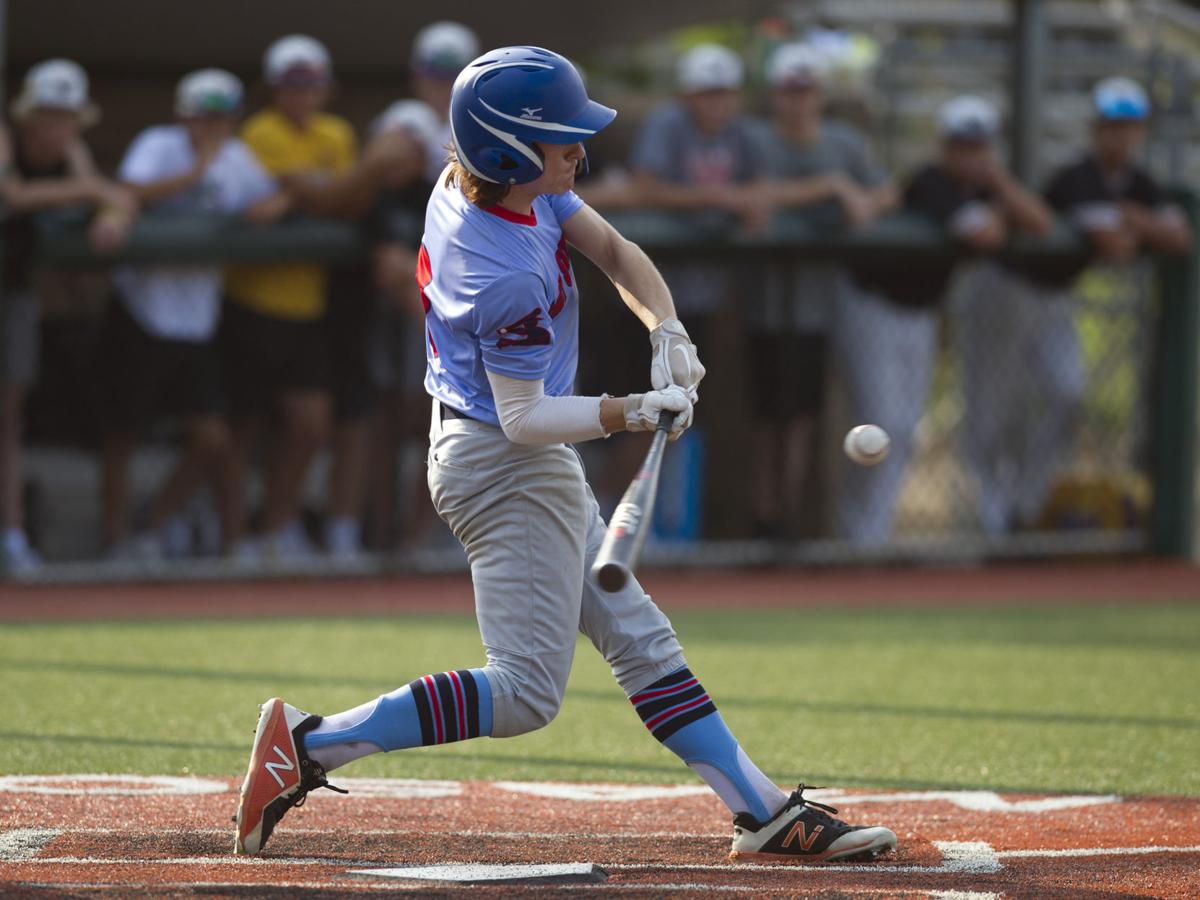 “(Bellevue West) came out swinging and they had a really good guy on the mound,” First State Bank Reserves coach Dylan Kucera said. “We were swinging it well, but just couldn’t find any holes. That’s baseball.”

Bellevue West staked out a 5-0 lead within the first three innings of action.

Two errors by Post 20 in the second inning allowed a single up the middle to cash in two more runs followed by another Bellevue West run in the top of the third.

Richmond, who went six innings for FSB, put up his lone zero on the day in the fourth.

“He may be short and little, but that kid has so much fight in him,” Kucera said.

First State Bank tallied their lone run of the game in the home half of the inning.

Nate Jones got the rally started with a double, then came in to score on a hard ground ball up the middle by Landon Lamson, which ate up the Bellevue West defense.

Bellevue West got the run back in the fifth then finished their scoring off in the sixth with two more runs.

Liam Schmidt kept Bellevue West off the board in the top of the seventh, but First State Bank was unable to chip away any of the deficit.

The FSB Reserves finish the year 21-5.

“It was a great season, super proud of these guys,” Kucera said. “They battled through everything, came to play every single practice, they were there to get better and learn and they did pretty much everything we asked of them. As coaches, you can’t ask for much more than that.”

To reach the state championship game, First State Bank rolled through the West Division of the Reserve state tournament.

Fremont broke a 3-3 tie in the fifth inning with five runs to secure the win. Logan Eggen provided three RBI while Aiden Wesemann went 2-for-3 with two RBI.

In the first game of the series, Post 20 put up nine runs in the first two innings on their way to a 10-4 win.

Lamson anchored the offensive performance with a 3-for-4 night, driving in three runs and scoring twice himself.

All three of his hits went for extra bases with two doubles and a triple.

Offense was limited in the rematch Tuesday night with First State Bank holding off Lincoln East 3-2.

All three Fremont runs came in the bottom of the second, erasing an early 1-0 lead for Lincoln East.

Tyler Hawley brought in the first run with a bases loaded sacrifice fly.

Aggressive base running cashed in the next two runs with M Hartung and Wesemann both scoring on wild pitches.

Lincoln East got a run back in the top of the sixth, but Eggen shut the door in the seventh, finishing off a complete game effort.

Eggen scattered 10 hits while only allowing two runs and striking out four.

Three Keys to the Game: Nebraska at Oklahoma

Is Sean Payton an early frontrunner for Coach of the Year?

Is Sean Payton an early frontrunner for Coach of the Year?

Ever since Elise Estudillo entered the Fremont volleyball program, she has wanted to be the Tigers libero.

Fremont bounces back against Benson

Fremont's Cameron Indra adjusting to life at No. 1 singles

Life at No. 1 singles has been an adjustment for Fremont’s Cameron Indra.

Fremont softball responded to a Lincoln Pius X walk-off win in extra innings with an 11-run win to split a doubleheader Thursday in Lincoln.

Bergan’s Jarett Boggs put on a show in the opening half of the Knights 62-6 blowout win over Omaha Concordia Friday night.

First State Bank Post 20 Reserves shortstop Liam Schmidt throws the ball across the infield for an out in the second inning of Post 20's 8-1 loss to Bellevue West in the American Legion Reserves state tournament championship game Wednesday.