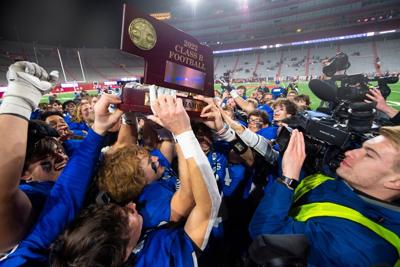 The No. 1-ranked Badgers scored twice on fourth down in the first half, including Nick Colvert's 1-yard plunge three seconds before halftime to open up a 21-7 lead, and eventually rolled to a 38-14 win over No. 3 Omaha Gross at Memorial Stadium.

"Yes and no," Badgers coach Kam Lenhart said when asked if anything was different between the two titles. "It's a moment we're going to really enjoy. We're going to be right here, right now in the moment (because) these guys deserve this. It's special.

"It's just as special as it was last year."

On the Badgers' third offensive play, Trey Bird fired a dart to Isaac Conner for a 75-yard touchdown and a 7-0 lead less than four minutes into the game. It was reminiscent of Bennington's semifinal win over Waverly when the Badgers hit paydirt on their second play from scrimmage.

Gross (12-1) answered with a big play of its own when Colby Duncan found Owen Brennan for a 41-yard touchdown on fourth-and-4 to tie the game with three minutes left in the opening period.

But from there, it was all Badgers.

Conner caught his second touchdown pass from Bird with 5:24 left in the second quarter to put Bennington back in front. Then, after the teams traded possessions, the Badgers drove to the Gross 1-yard line, called timeout on fourth-and-goal, and then handed the ball to Nick Colvert for a touchdown and a 21-7 lead just before halftime.

"Huge. Tremendous momentum going in (to the locker room). When we came over to the sideline after calling timeout, the boys said, 'We're going, we're going.' That's when we knew we had it going," Lenhart said.

"For Nick to punch it in like he did was just a sign that we were where we needed to be going into the half."

Colvert ran for 125 yards and two scores for Bennington. Bird, another senior, was 13-for-20 passing for 202 yards with the two touchdowns to Conner, who finished with four catches for 110 yards.

Bird went 25-0 as Bennington's starting quarterback after taking over for an injured Seth Wempen early in the 2021 season opener.

"It's just amazing. I had a lot of help around me — a lot of younger guys step up, a lot of veterans, leadership, everything," Bird said. "So this isn't all me. I have a lot of playmakers around me."

Omaha Gross, 4-6 last season, opted up to stay in Class B for the current cycle and was rewarded with its first finals trip since 2012.

But the Cougars couldn't keep up after the opening quarter. Jake Garcia, who came into the game with 1,850 rushing yards, picked up 21 on his first two carries of the game but added just 14 more by the end of the third quarter before finishing with 91.

"These guys, I truly believe they don't care who gets the glory as long as we're playing together and winning together," Lenhart said. "Our motto has been, since I've been around, 'Together we win.' And that was true again tonight."

It is the second time in Norfolk Catholic's state-leading 11 championship wins that the Knights have shut out their foes.

RAW: WORLD CUP: AMERICAN FANS IN QATAR REACT TO THE NETHERLANDS VICTORY OVER US

RAW: WORLD CUP: AMERICAN FANS IN QATAR REACT TO THE NETHERLANDS VICTORY OVER US

Behind the Scenes - At the World Cup media hub

Behind the Scenes - At the World Cup media hub