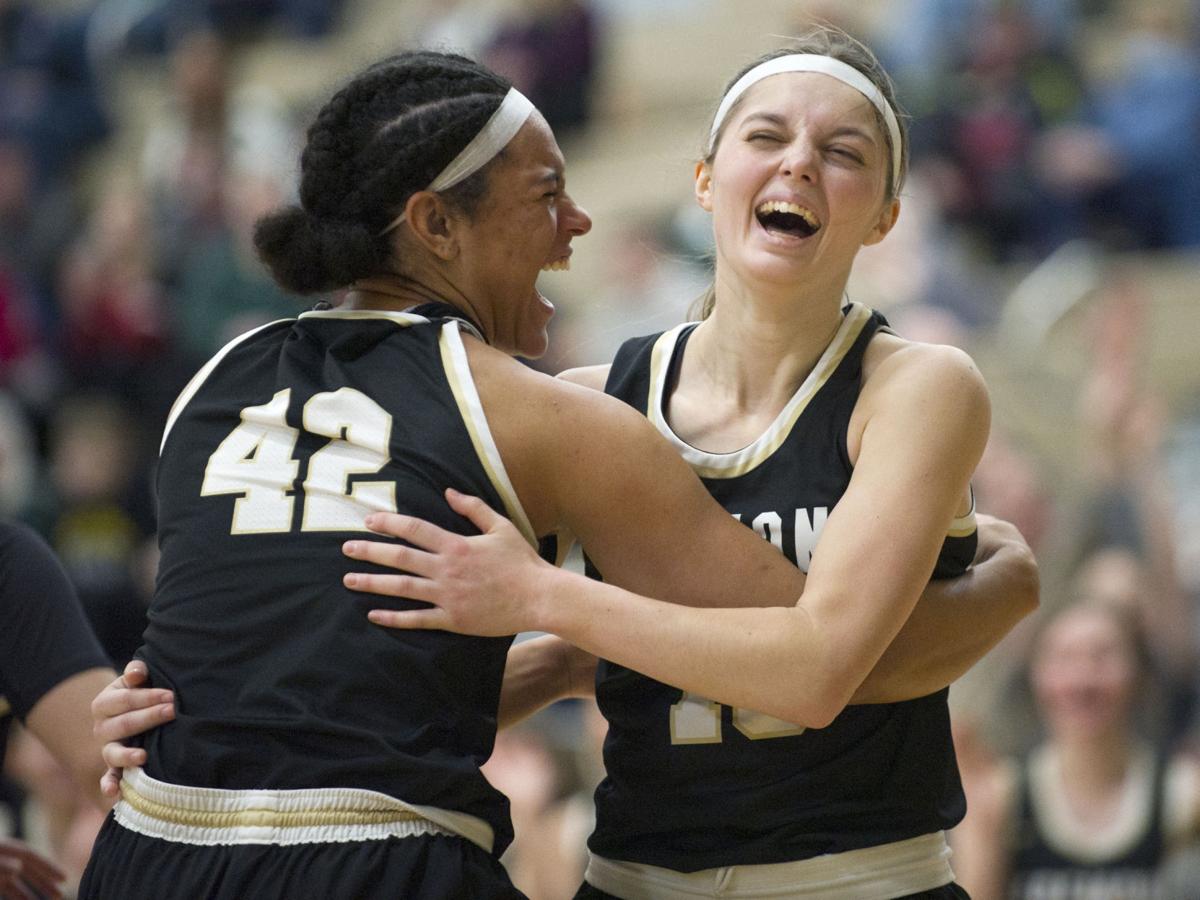 Fremont's Macy Bryant and Taylor McCabe embrace after McCabe hit a three-point shot at the end of the third during the Tigers 59-47 win over Lincoln Pius X in the HAC tournament championship Thursday. 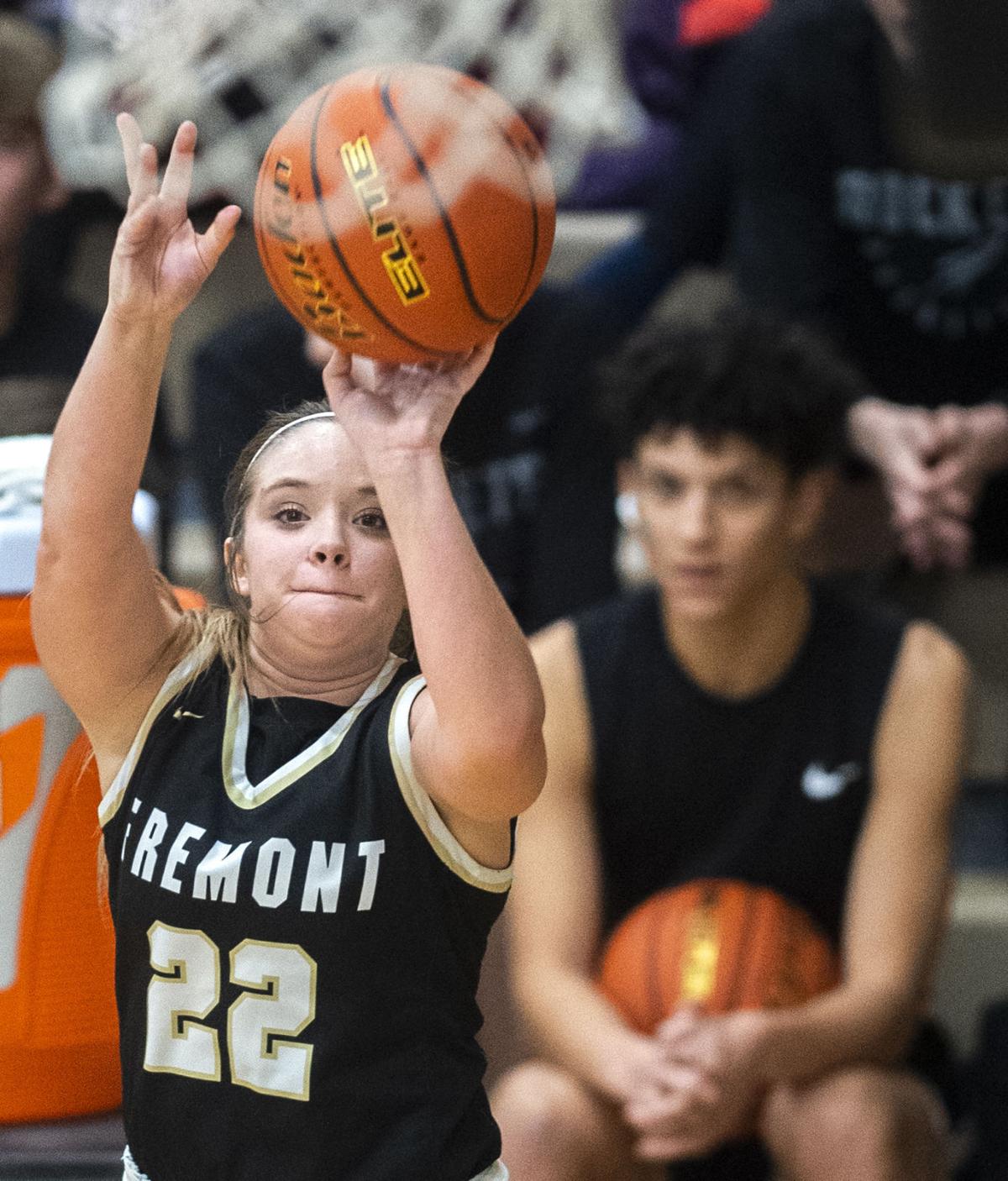 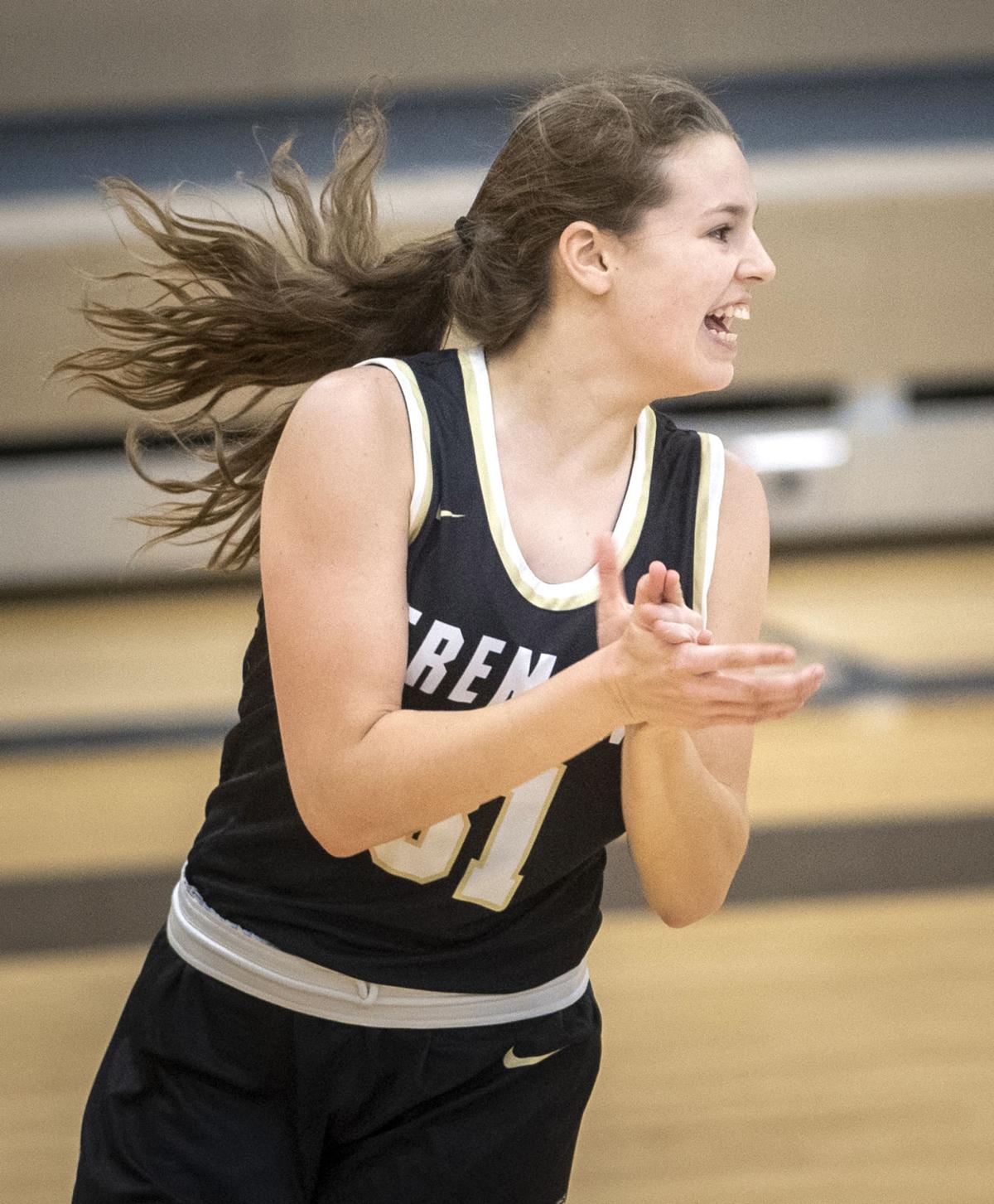 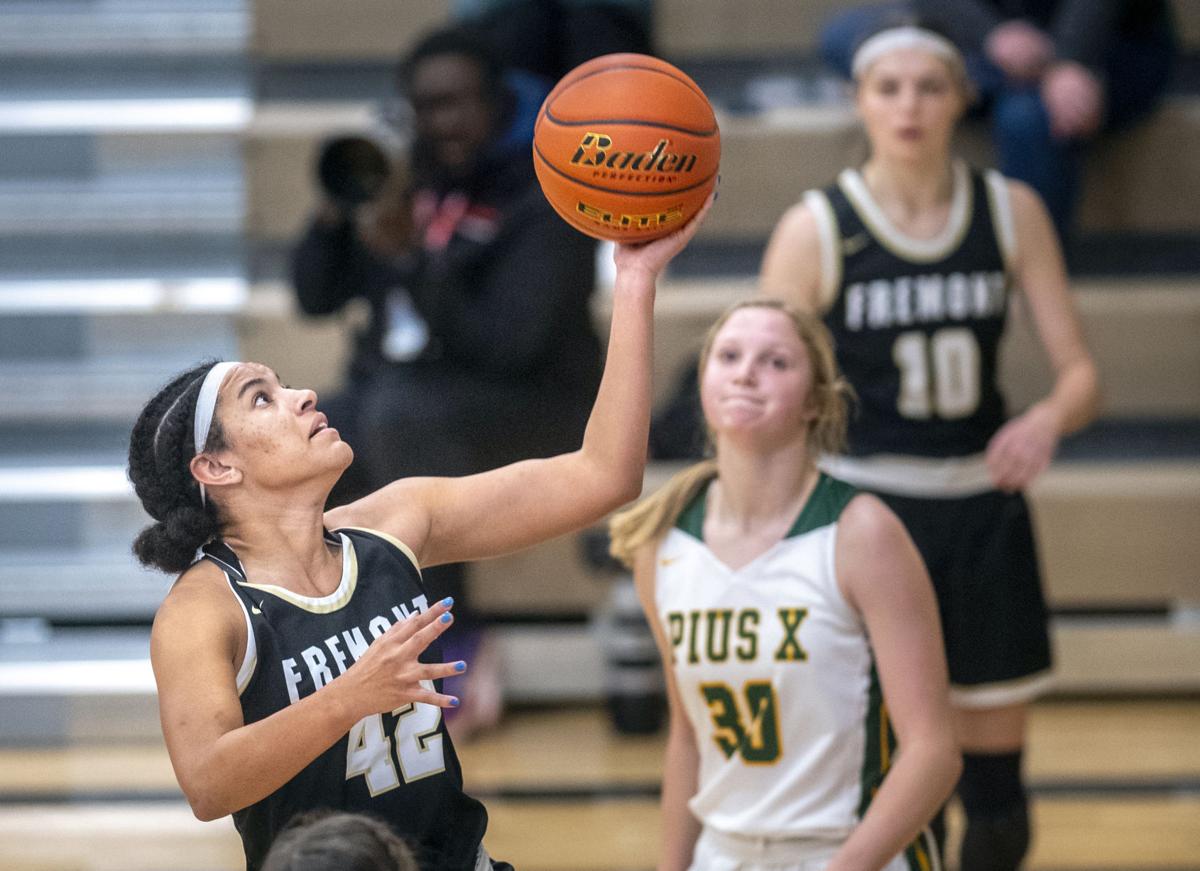 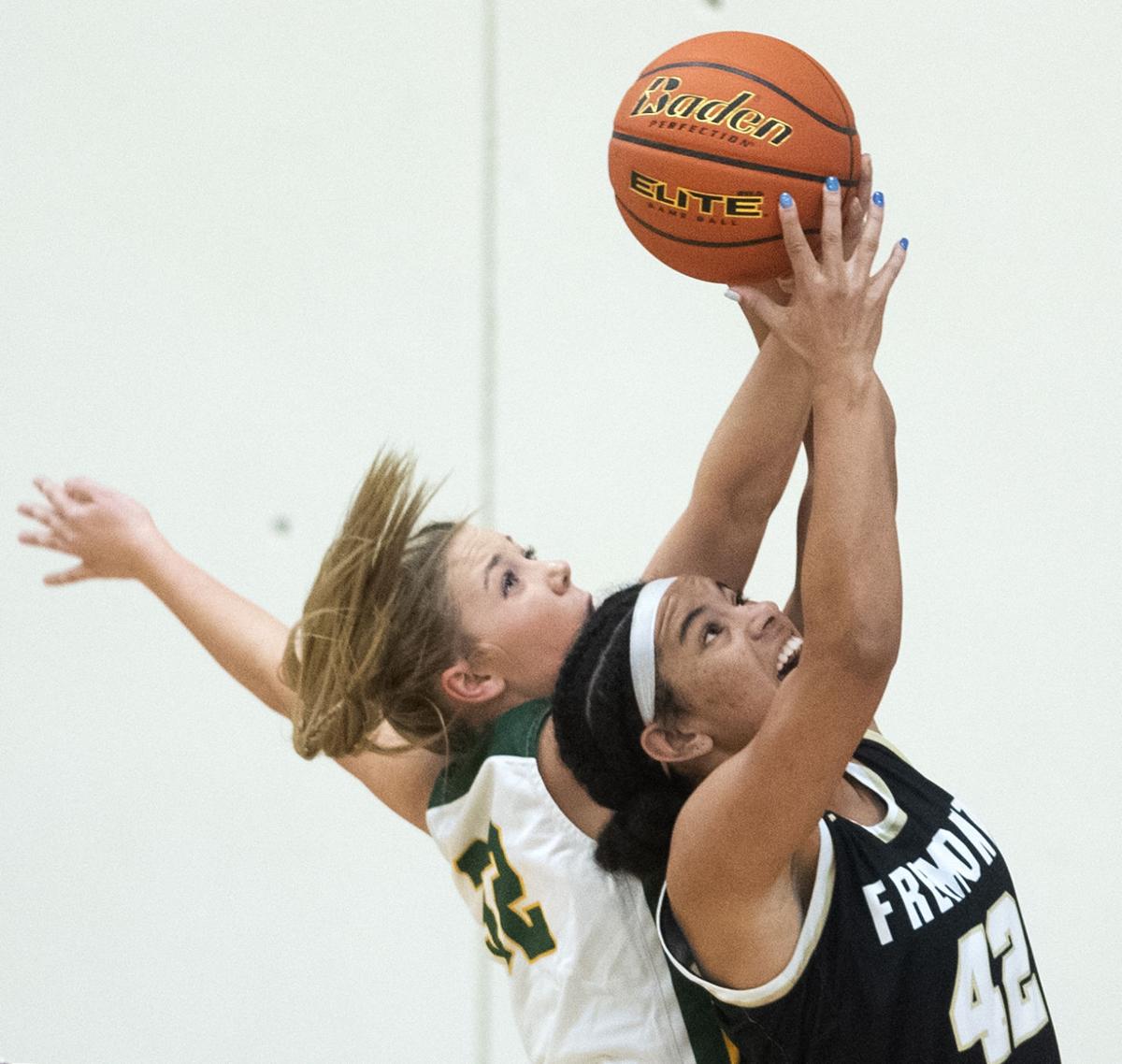 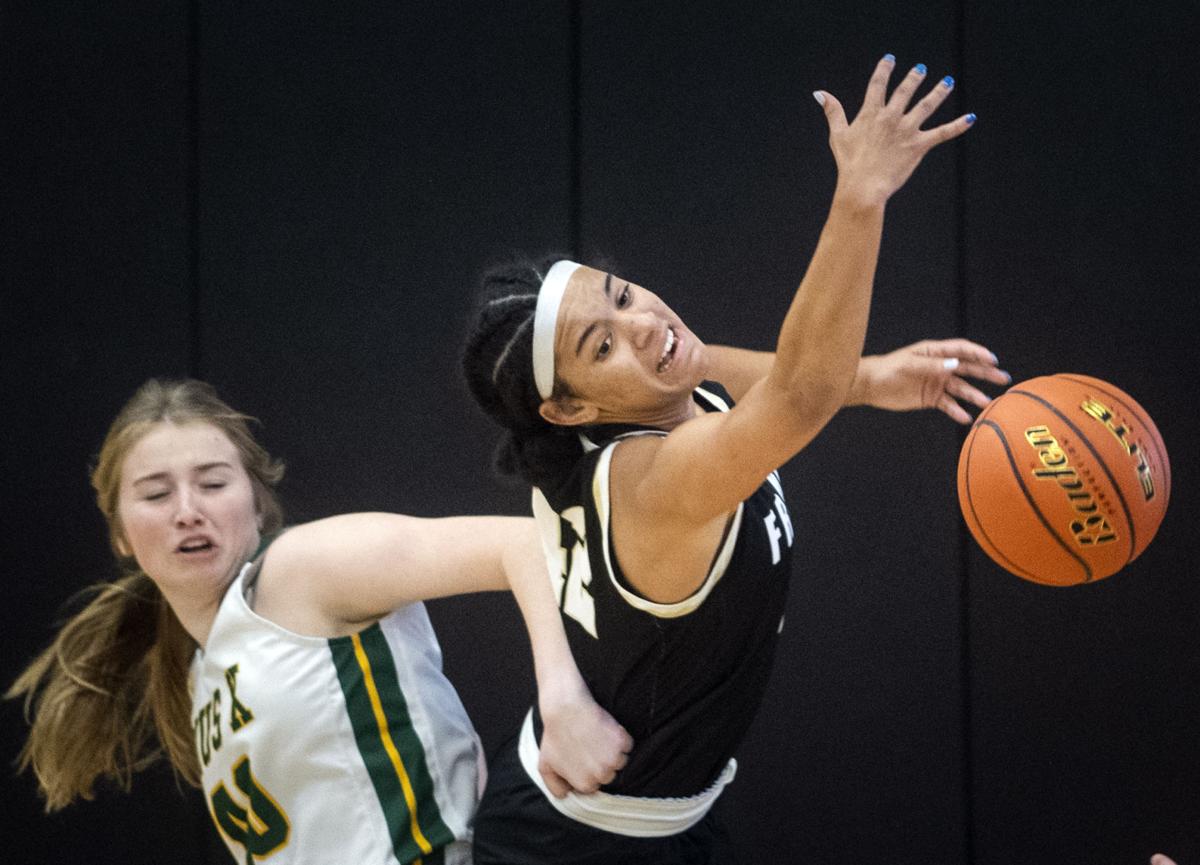 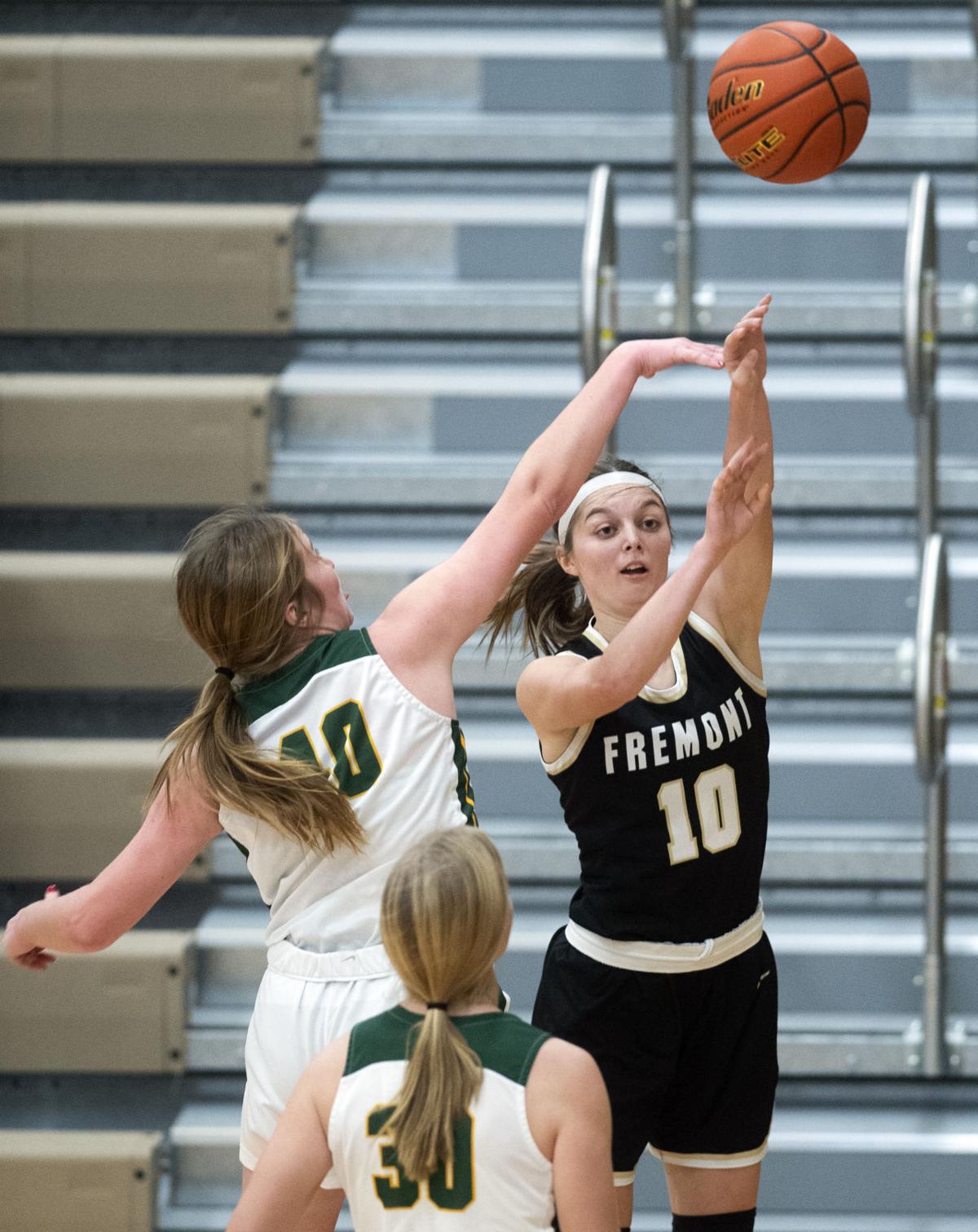 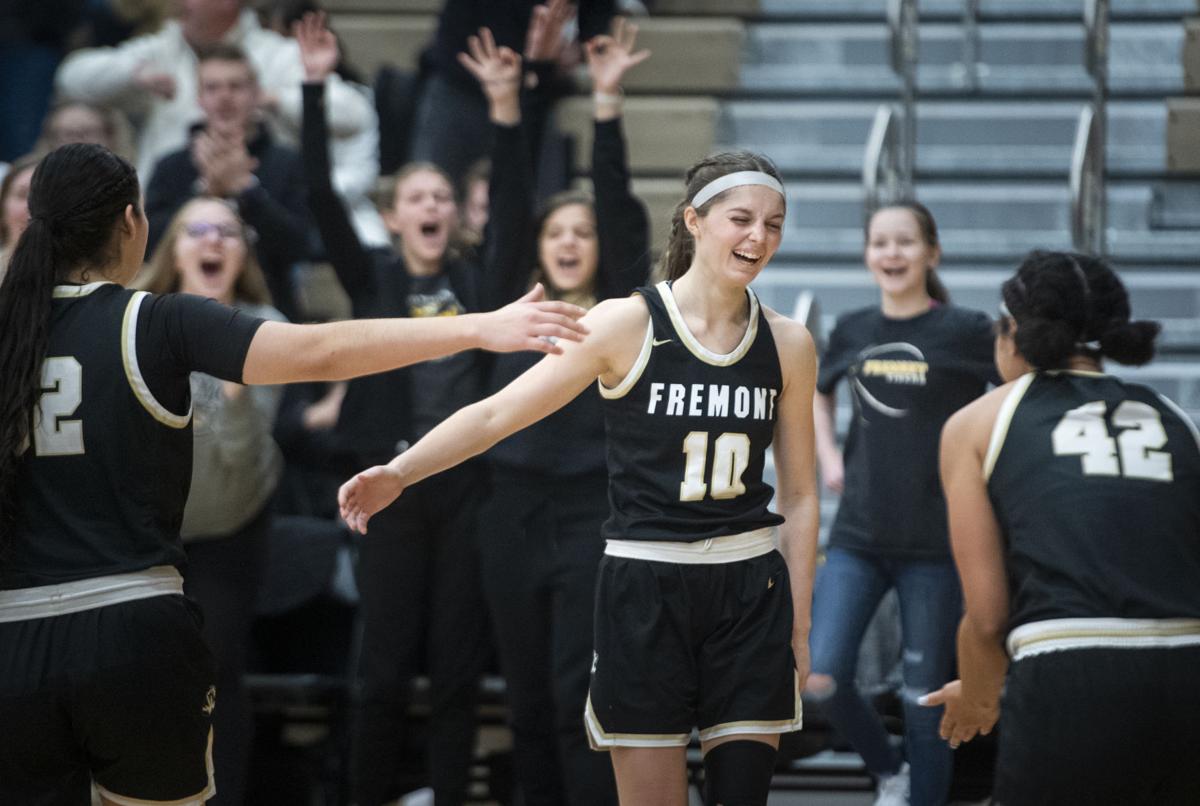 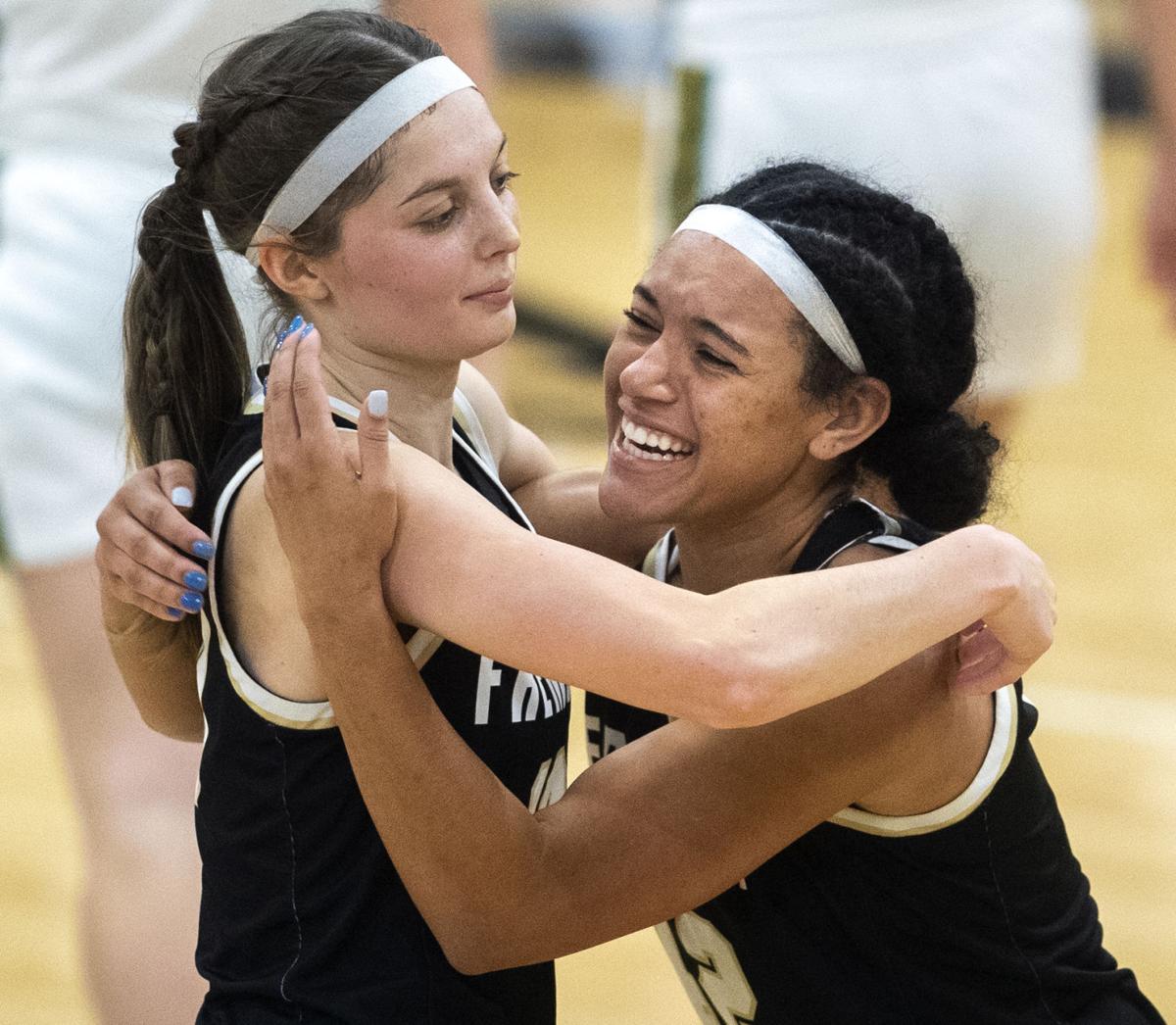 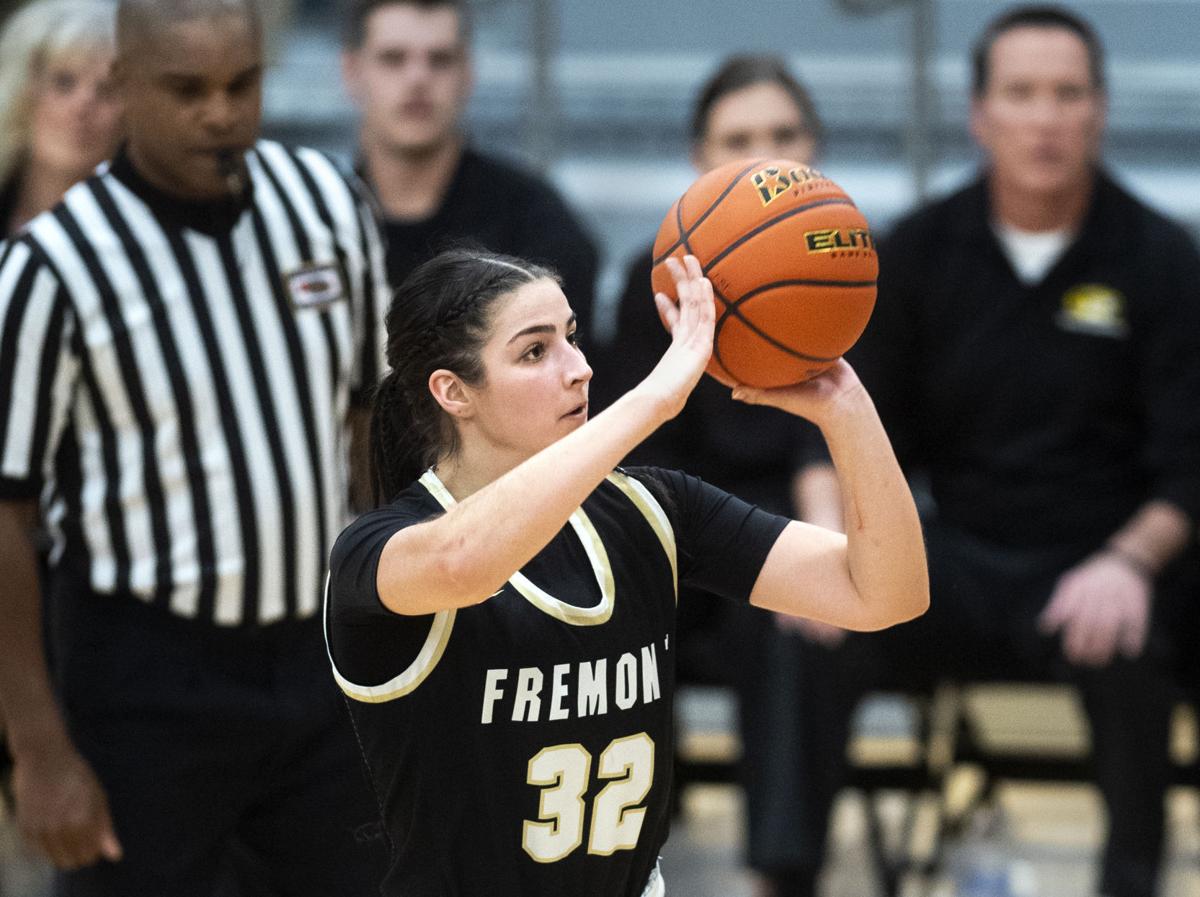 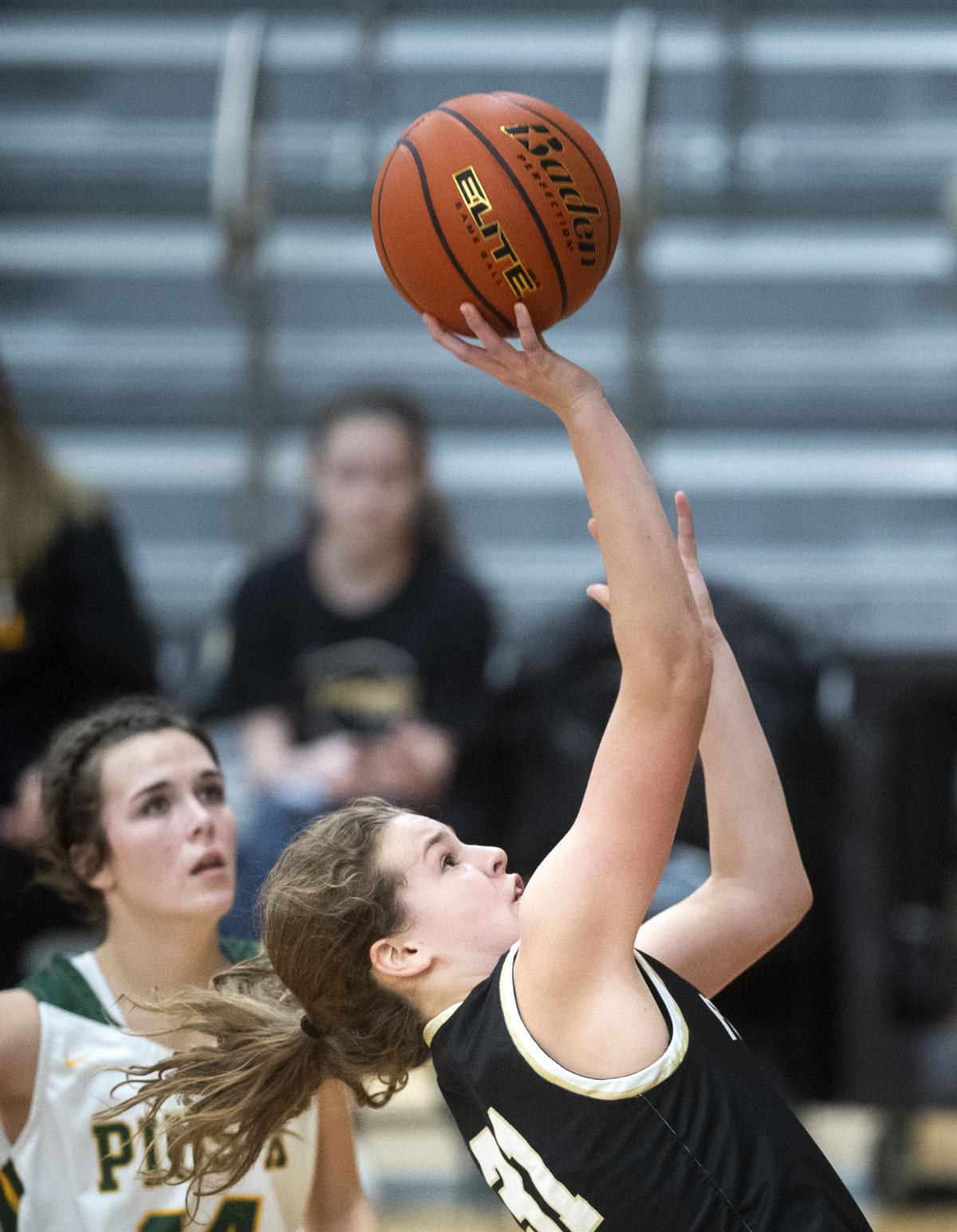 “It feels kind of like a relief, something that needed to be done after all this time,” said Fremont senior Taylor McCabe.

In the last three years, Fremont is a combined 53-13. Of those 13 losses, six have come at the hands of Pius X.

Prior to Thursday afternoon’s tip, the Tigers quartet of starting seniors were 1-8 against the Thunderbolts including a 68-64 double overtime loss to start this season.

“That’s one of the reasons why it feels so good because they have tremendous tradition in the whole state, but also against us,” said Fremont coach Kelly Flynn. “To lose four games the entire year last year, but three against them and then to start out the year where we thought we’d get a ‘W’ right off the bat.

“We really knew that we were better than what we showed at the beginning of the year.”

McCabe and Bella Keaton combined for all 14 of the Tigers opening points in the contest with both knocking down a pair of three’s.

“We are playing with a lot better flow now and I just don’t feel like they were expecting that.”

McKenna Murphy, who finished with 12 points, got in on the three-point action to balloon the Tiger’s early lead to 21-10 by the end of the first quarter.

“We really wanted to get on them early and establish that tempo and I thought we did in that first quarter,” Flynn said.

Fremont was 8 of 14 from three in the opening half with six different Tigers knocking down a shot from behind the arc.

“That makes it a lot tougher to guard when you are doing things like that,” Flynn said.

The sharpshooting kept the Tigers in front by double-digits the entire eight minutes of action, leading 34-21 at halftime, a familiar place for Fremont inside the rivalry.

Fremont led 41-38 at halftime in last year’s HAC tournament championship, 29-24 in the Class A state title game and 33-23 at the intermission of this year’s first meeting before ultimately losing both games.

“I said at halftime, let’s keep in mind, every time we play them we are ahead at the half,” McCabe said. “We have the momentum going into half, we can’t let up in the third quarter.”

The Tigers lead reached as many as 17 in the second half before Pius began chipping away at the deficit, getting within 11 midway through the frame.

McCabe, who finished with 20 points, sent Fremont into the fourth quarter with a jolt, finding the three-point line to knock down a last second shot and a 48-34 lead.

Pius put together a final push to bring Fremont’s lead back to single digits for the first time since the opening quarter at 55-47 with two minutes, eight second remaining.

The Bolts elected to turn the final two minutes into a free throw contest, fouling the Tigers three times in a 15 second span to push Fremont into the bonus.

McCabe sank both of her shots from the charity strip to regain a double-digit advantage.

“As they started creeping back, I kind of knew they were in an uncomfortable spot because they started to press and that’s not their style,” McCabe said.

Keaton, who finished with eight points, put the finishing touches on the win with a perfect trip to the line as well to set the final score.

“The big thing we talked about was not letting them back in if we do get up,” Flynn said. “That’s what I was proud of at the end there because they could have chipped away there.”

Bergan hung with Class C-2 No. 3 Guardian Angel Central Catholic for most of Thursday night’s clash, but a barrage of three’s late by the Blue…

Tigers take No. 5 Creighton Prep to the wire

Fremont had upset on their mind Saturday, traveling to No. 5 Creighton Prep, but the Junior Jays thwarted the Tigers 52-46.

Fremont hockey picked up a pair of wins over the weekend, including a one-goal victory over top-team Tri City.

The Bergan boys continued their hot streak from behind the arc, knocking down 11 3-pointers in a 69-22 win over Brownell-Talbot Monday.

Fremont hosted its first swim meet of 2022 Tuesday, facing off against Lincoln East and Omaha Burke.

Bergan won both of its duals at the Columbus Scotus Triangular Thursday, beating Boys Town 39-15 and the host Shamrocks 46-18.

Fremont Bowling Club competed in Grand Island earlier this month with the boys finishing fourth and the girls placing seventh. went to Westsid…

Fremont's Macy Bryant and Taylor McCabe embrace after McCabe hit a three-point shot at the end of the third during the Tigers 59-47 win over Lincoln Pius X in the HAC tournament championship Thursday.