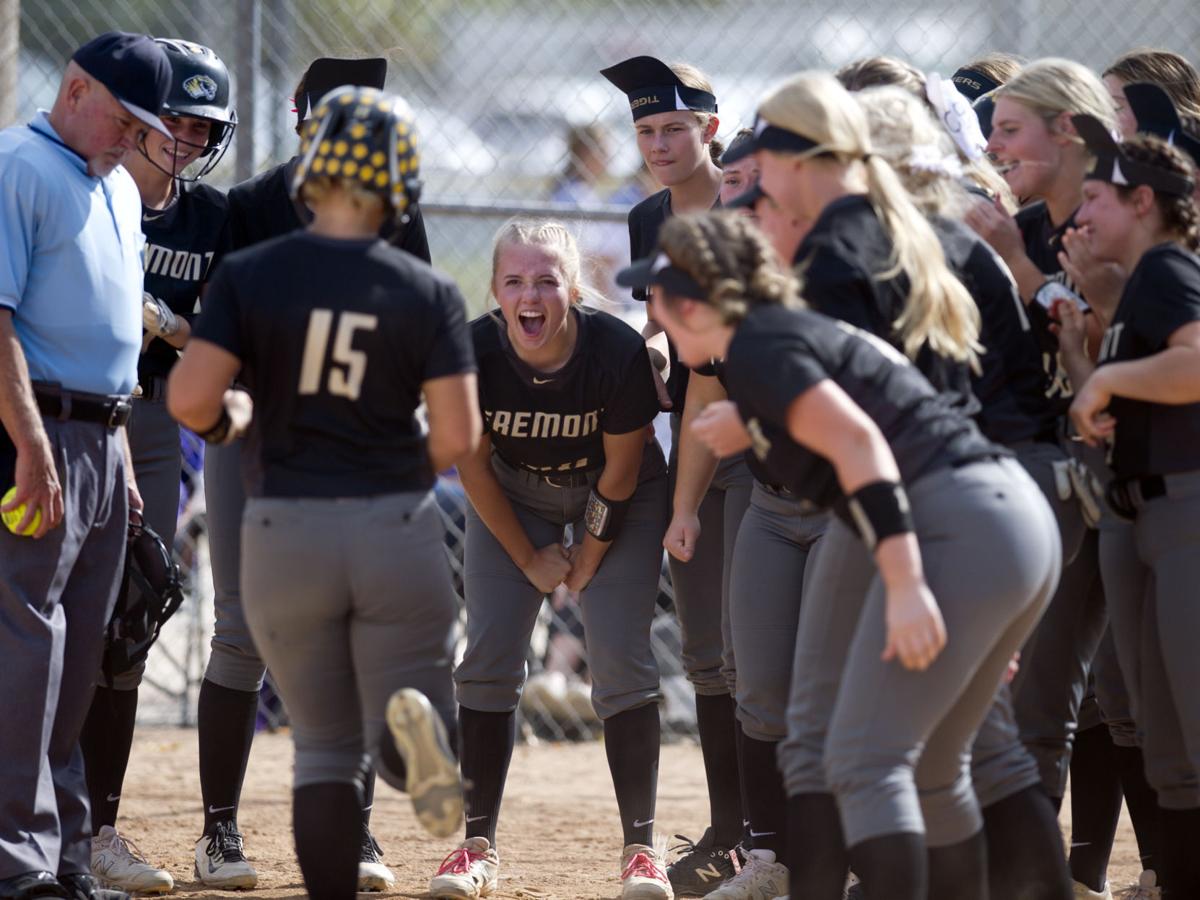 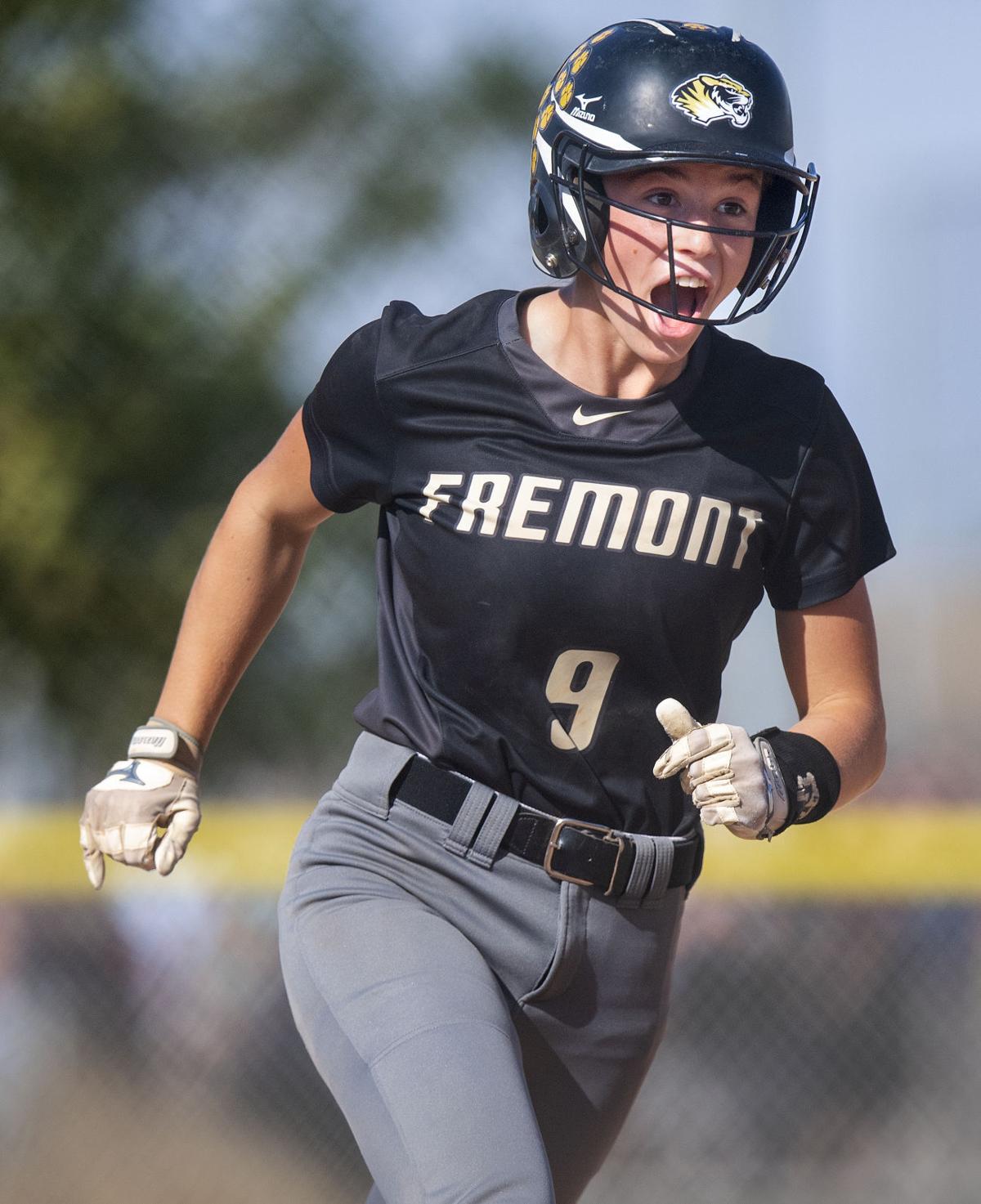 Fremont's Ella Cooper reacts after hitting a three-run home run off of Lincoln East pitcher Campbell Petrick in the first inning of the Tigers 7-5 loss to the Spartans in the District A-4 softball championship game at Doris Bair Softball Complex. 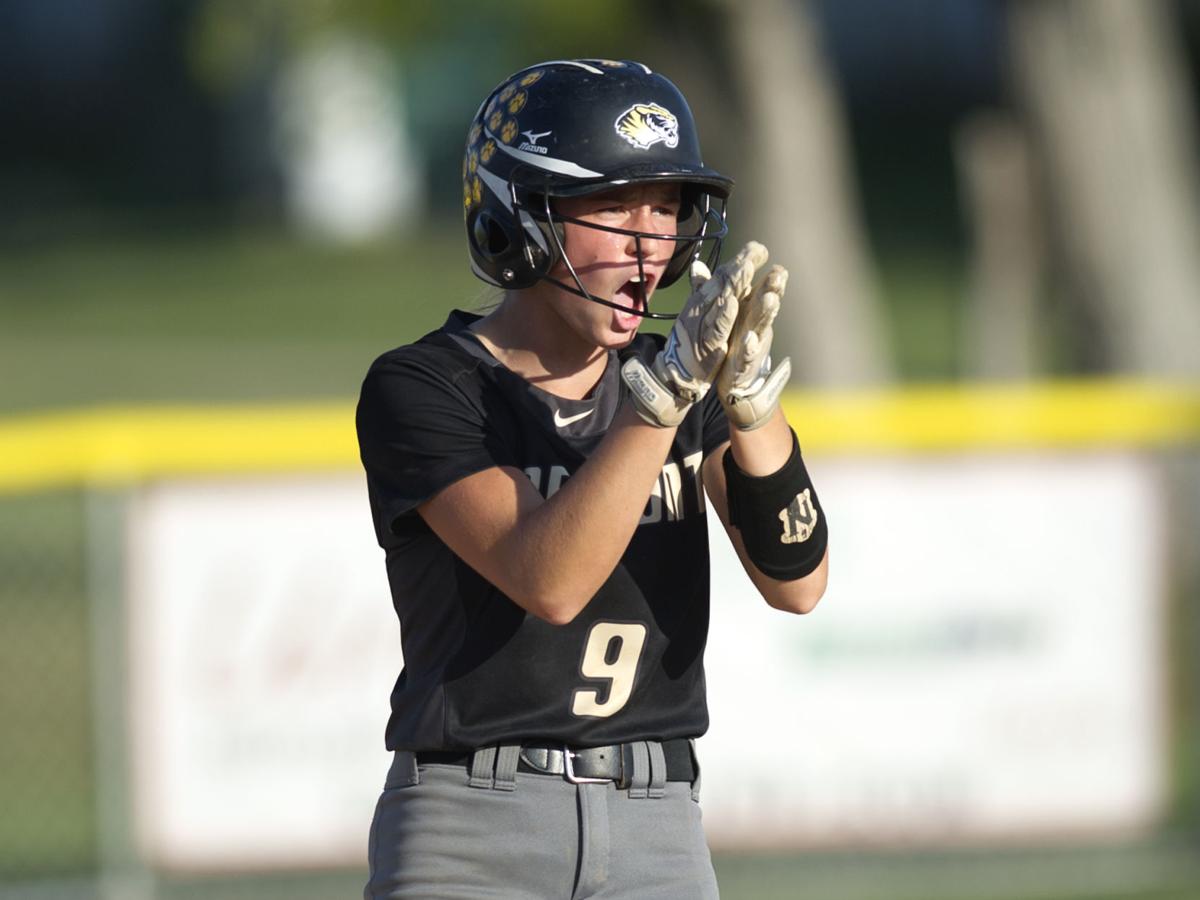 Fremont's Ella Cooper celebrates a double in the seventh of the Tigers 7-5 loss to Lincoln East in the Class A District 4 championship game Thursday. Cooper struck out seven in six innings of work while also securing four of Fremont's seven hits on the day. 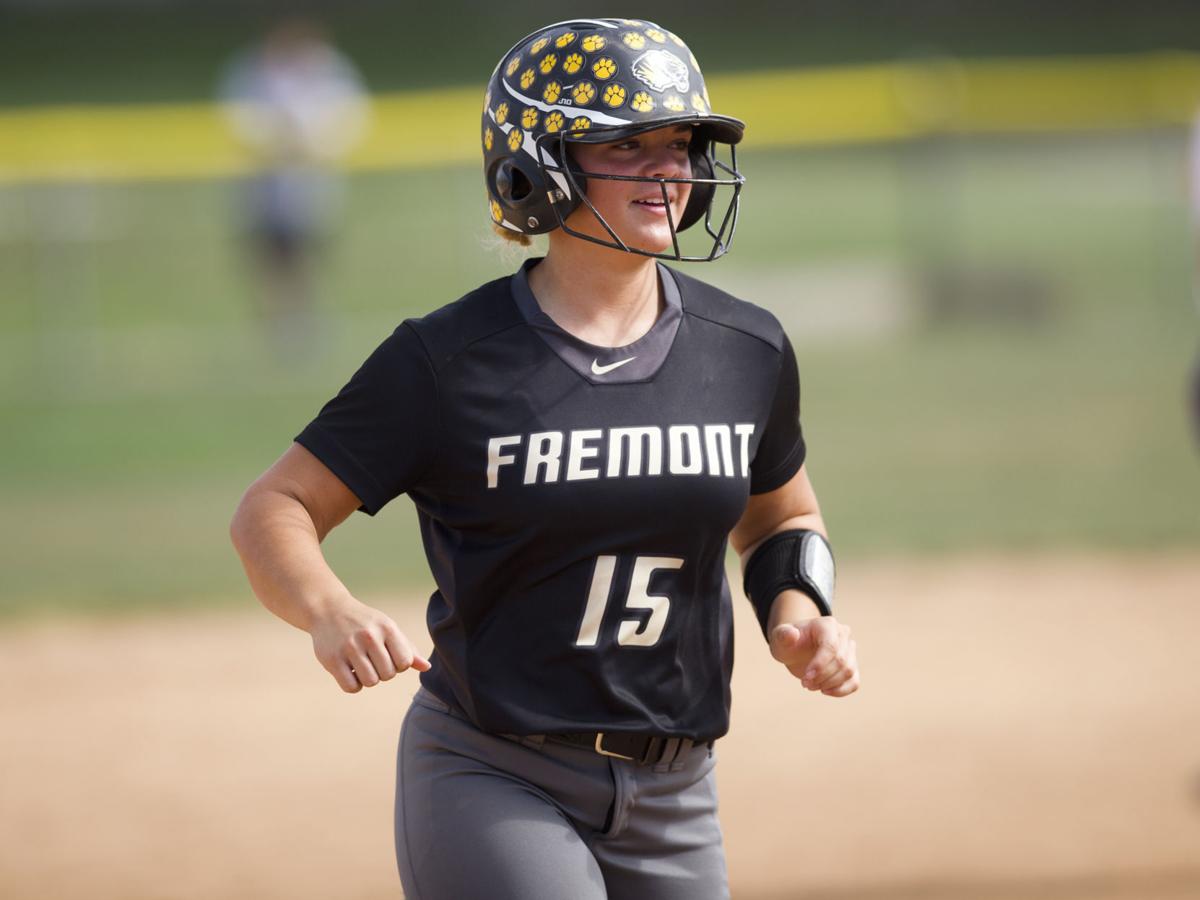 LINCOLN—The Fremont softball season came to a close Thursday, ending on a 7-5 loss to Lincoln East in the Class A District 4 title game Thursday.

“We were excited to put ourselves in a position to see East again and had the lead for a little bit,” said Fremont coach Michael Schleicher. “It was a tough way to end, but this group has accomplished so much this year and has progressed just as far if not farther than any other team I’ve coached in my time.”

The Tigers had to overcome a seven-run deficit against Grand Island to stave off elimination earlier in the day, beating the Islanders 12-9 after scoring all 12 runs in the final four innings.

Fremont carried that momentum into the championship game, getting off to a hot start as Ella Cooper sent a blast over the left field fence three batters into the game to give the Tigers an early 3-0 advantage.

The Tigers lead lasted until the third. Lincoln East took advantage of a lead-off walk to get on the board, stringing together a double and two singles to tie the game at 3-3.

Fremont regained the lead in the top of the fourth, loading the bases on walks to Jaiden Rensch and Zoey Bisson around a single by Maggie McClain.

Emma Sorensen ground out into a fielder’s choice to hand the Tigers a 4-3 advantage, but Fremont could do no further damage in the frame.

A pair of doubles from Cooper and Mackenzie Kinning in the fifth widen the Tigers lead to 5-3.

For the fourth time in the district tournament, East hit a two-run shot off Cooper, tying the game at 5-5 in the bottom of the fifth.

The Spartans took the lead for good in the sixth, with a two-out single to left bringing in the go-ahead run followed by a sharp grounder through the left side of the infield to tack on an insurance run.

Cooper notched her fourth hit of the game and third extra base hit with a one-out double in the seventh, but the Tigers were unable to overcome

The junior accounted for four of Fremont’s seven hits, going 4-for-4 with three RBI and two runs scored.

In the circle, Cooper struck out seven while walking four and allowing six hits.

“Ella is probably the most driven athlete I have ever coached and no challenge is too big for her and she will take it head on,” Schleicher said.

The end of the season brings the end to the high school softball exploits for 12 of the Tigers seniors, many of which have been teammates on the diamond since grade school.

“I’ve known these girls since before their softball days a lot of them and a lot of them I’ve coached in youth stuff since they were ten and under,” Schleicher said. “I told them the softball may be done, but they are all just high-character girls and good representatives of student-athletes at Fremont High and they’ve always got a place in the program.”

The district runner-up finish, though not what the Tigers had envisioned when the day began, brought the Fremont seniors full circle as it was the first district place for the program since 2018’s runner-up finish when the group were freshmen.

“This group has put us back to where we wanted to be,” Schleicher said. “Those seniors and obviously those contributions from the underclassmen have put us back in the discussion in Class A softball now.

“I challenged the underclassmen to just pick up the ball and go with it next year.”

Emma Sorensen broke out of her district slump to blast two home runs in the final two innings of Fremont’s 12-9 comeback win over Grand Island in the Class A District 4 championship play-in game Thursday.

“Emma had struggled a little bit here recently putting the bat on the ball and we just tried to reassure her that all hitters have slumps and those things are temporary and if she just kept getting good swings on the ball, good things would come and sure enough it did,” said Fremont coach Michael Schleicher.

The senior went 0-for-6 in the Tigers’ first two games of districts, striking out in every plate appearance.

Sorensen came through when Fremont needed her, sending a two-run shot out over the center field fence to complete an eight-run comeback effort by the Tigers spread across three innings of work.

“It was right down the middle, so I had to take the opportunity to hit it,” Sorensen said.

The Tigers found themselves starting at a seven-run deficit after an error-plagued third inning allowed the Islanders to lead 7-0.

It was déjà vu from the two team’s meeting Wednesday as Fremont struggled to defend against Grand Island’s bunts, committing five errors in the frame.

In another mirror of Wednesday’s game, it was Maggie McClain that got the Tigers’ offense going.

Her single with a pair of runners aboard put Fremont on the scoreboard at 7-1 in the top of the fourth.

The Tigers’ offense started cooking in the fifth with Sorensen drawing a lead-off walk and Mallory Schleicher singling.

Ella Cooper sent a double to the fence to score Sorensen. Kylie Phillips followed with a single to center, plating two and bringing the Tigers within striking distance.

Mackenzie Kinning blasted the first pitch she saw over the left field fence for a two-run bomb to trim Fremont’s deficit to a run, 7-6, setting up Sorensen’s go-ahead blast.

Fremont never trailed after taking the lead in the sixth.

The Tigers put up two more runs in the frame after Sorensen’s homer with Jaiden Rensch singling in a run and Adisyn Mendlik producing a run with a hard line drive to short that was dropped.

Sorensen got to duplicate her efforts in the seventh, leading off the frame with a solo shot to center, extending Fremont’s lead to 11-7.

“It was the same pitch, right down the middle,” Sorensen said.

Kinning added Fremont’s final run of the game, plating Cooper, who reached on a double, with a single down the left field line.

Grand Island got two runs back in the bottom of the seventh with a two-out, two-run home run before Cooper shut the door with her 11th strikeout of the day.

No. 1 Bergan was clinical in dispatching No. 10 Oakland-Craig 56-21 Friday night to officially secure their spot in the playoffs.

The Fremont freshman football team lost 32-21 in their final game of the fall last Thursday.

The Fremont junior varsity cross country teams wrapped up their season with a home meet Friday.

2021 Heisman Trophy Market: Where is the value?

Fremont's Ella Cooper reacts after hitting a three-run home run off of Lincoln East pitcher Campbell Petrick in the first inning of the Tigers 7-5 loss to the Spartans in the District A-4 softball championship game at Doris Bair Softball Complex.

Fremont's Ella Cooper celebrates a double in the seventh of the Tigers 7-5 loss to Lincoln East in the Class A District 4 championship game Thursday. Cooper struck out seven in six innings of work while also securing four of Fremont's seven hits on the day.