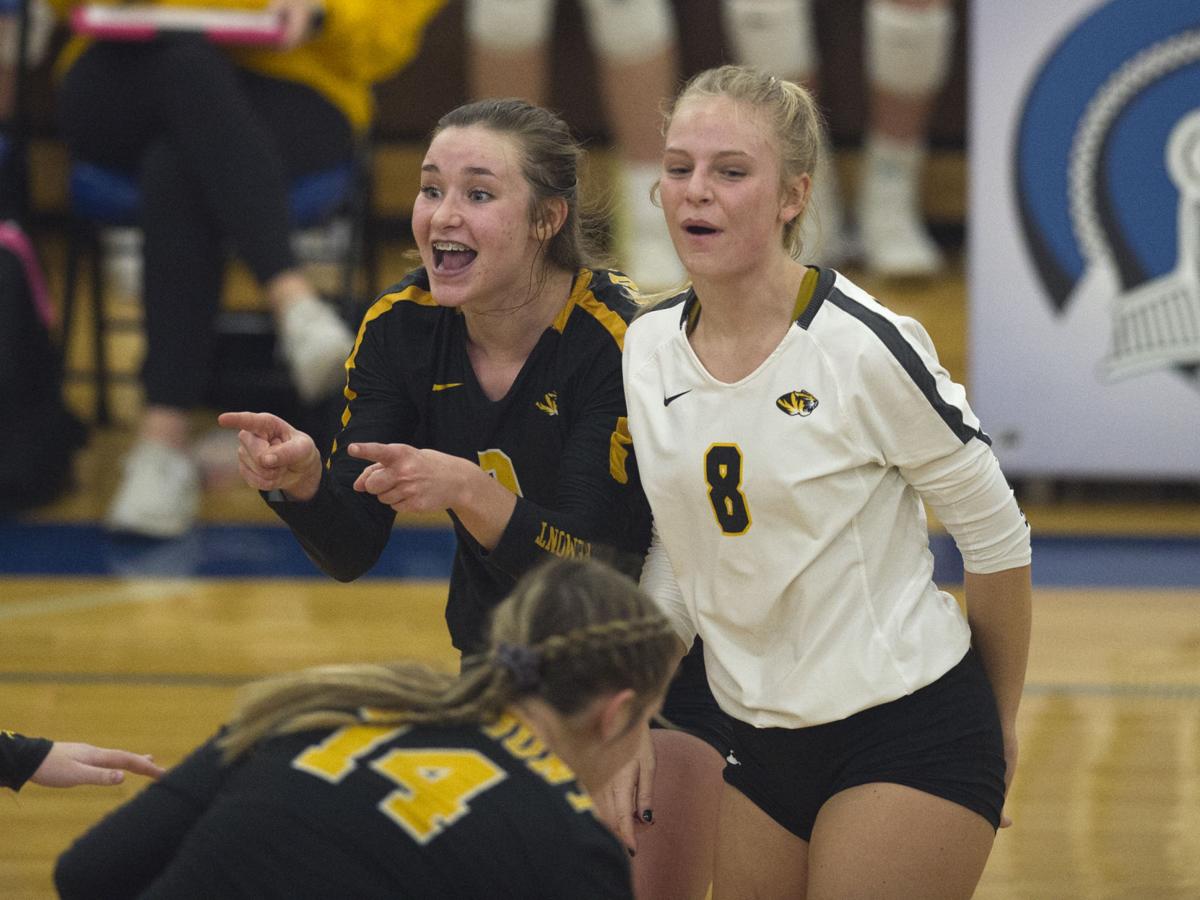 Fremont's Mattie Dalton and Elise Estudillo celebrate a point during the Tigers 3-1 win over Lincoln East in the third place game of the Heartland Atlhetic Conference tournament Thursday. 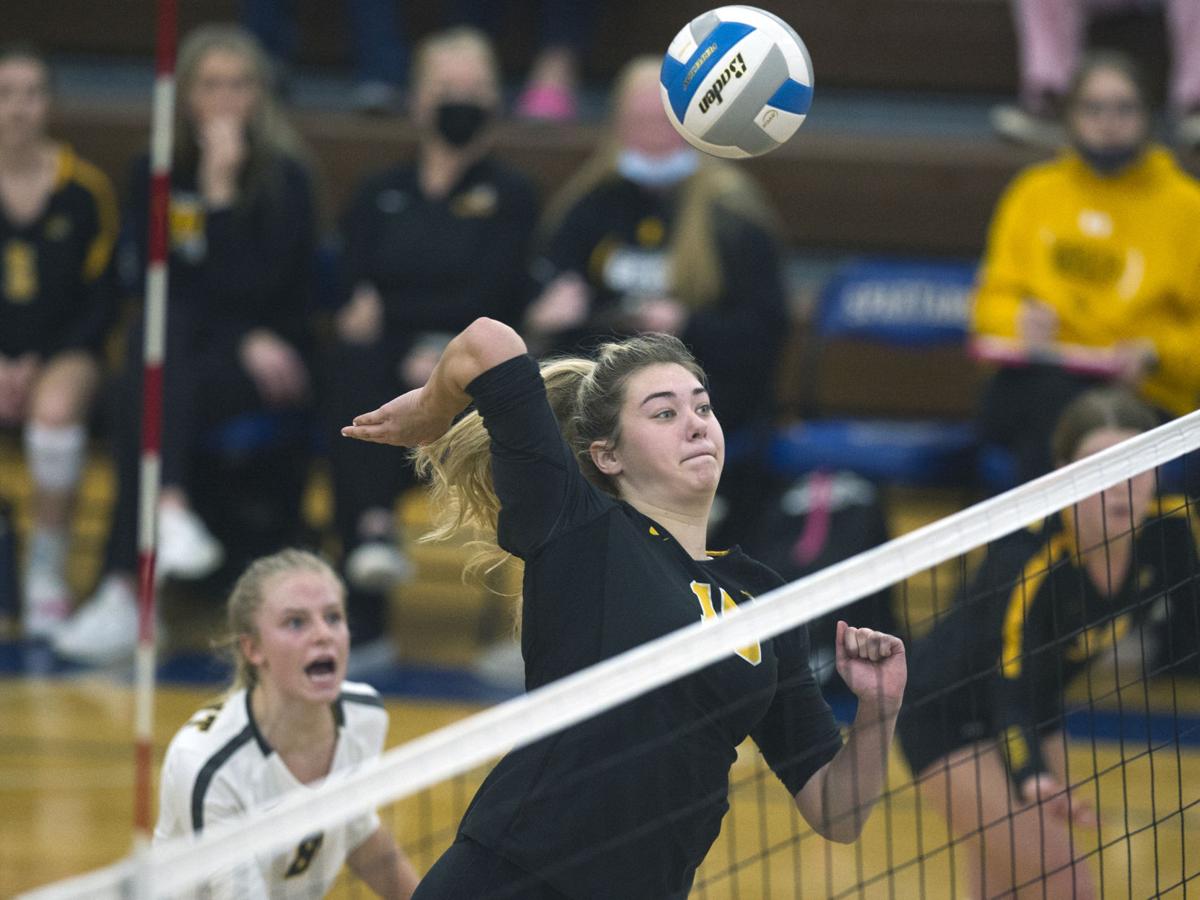 Fremont's Grace Williams takes a swing during the Tigers 3-1 win over Lincoln East in the third place game of the Heartland Atlhetic Conference tournament Thursday.

LINCOLN—Fremont coach Karen Nelsen scanned the faces of her players during a timeout in the third set of the Heartland Athletic Conference tournament third place match, searching for signs of the mental fortitude needed to close out a 22-22 tie with Lincoln East.

The Tigers did in fact have it, scoring the final three points to take the decisive third set on the way to a 3-1 win over the Spartans to claim their best conference tournament finish in the past five years.

“We haven’t always done that,” Nelsen said. “So to see us do that at this point in the season tells me that we’ve come a lot farther than I thought we had come.”

Fremont got behind the eight ball in the opening set, finding themselves down 15-7 midway through the first set.

A brief run—fueled by a trio of aces by Mya Bolden, who finished with four on the night—got the Tigers within four at 18-14, but the Spartans held off Fremont to take the set 25-19.

The second set needed extra points to decide with Emmalee Sheppard hammering a kill through the Spartans block to even the match at 1-1 with Fremont securing the 28-26 set two win.

The third set fared similarly, with Fremont and East trading points all the way out to a 22-22 tie, prompting a Tigers timeout.

It was all Fremont out of the break as the Tigers scored the final three points of the set to take it 25-22. Mattie Dalton and Brylee Nelsen combined for the set-sealing block.

The fourth and final set was lighter on the Tigers faithful’s nerves with Fremont producing a five-point lead late, 19-14, and holding on to it to secure the set 25-19 and the match 3-1.

The win—the 21st of the fall—matches the previous school record for a wins in a season.

That says so much about our turnaround. Just last year they were .500 and to turn that around to 21 wins, I could not be prouder of the legacy the seniors are leaving.

Fremont finished with three attackers with double-digit kills, led by 15 from Dalton, 12 from Grace Williams and 10 from Sheppard.

Elise Estudillo led the Tigers in digs with 22.

Fremont will host at least one more game this fall, earning the No. 2 seed in the Class A-7 district tournament.

“That in itself is something that the girls celebrated,” Nelsen said. “To see them continue to check off a list that was a mile long in August is so rewarding.”

The Tigers will face three-seed Kearney on Tuesday, Oct. 26. Fremont won the regular season meeting between the two schools 3-1 on Sept. 7.

On the other side of the district bracket is No. 1 seed Omaha Westside and No. 4 seed Omaha Central.

Fremont-area calendar of events for Oct. 23-25

Fremont Public Schools has announced an early release day on Wednesday, Nov. 3, due to the Fremont Tiger volleyball team playing in the state …

Fremont's Mattie Dalton and Elise Estudillo celebrate a point during the Tigers 3-1 win over Lincoln East in the third place game of the Heartland Atlhetic Conference tournament Thursday.

Fremont's Grace Williams takes a swing during the Tigers 3-1 win over Lincoln East in the third place game of the Heartland Atlhetic Conference tournament Thursday.