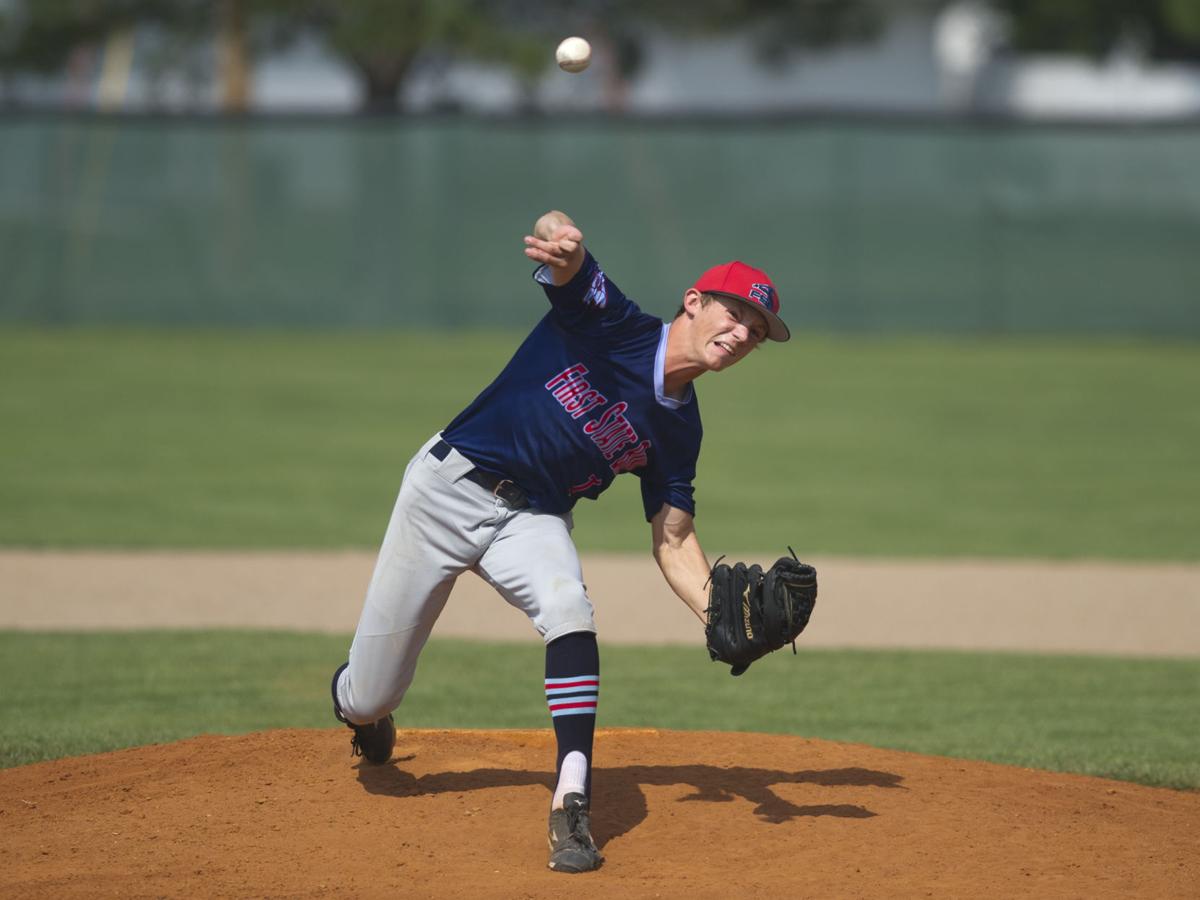 First State Bank Post 20 starter Dawson Glause throws a pitch during Post 20's 5-0 win over Gretna in the first game of the A6 district championship series. Glause went all seven innings without allowing a run while striking out nine. 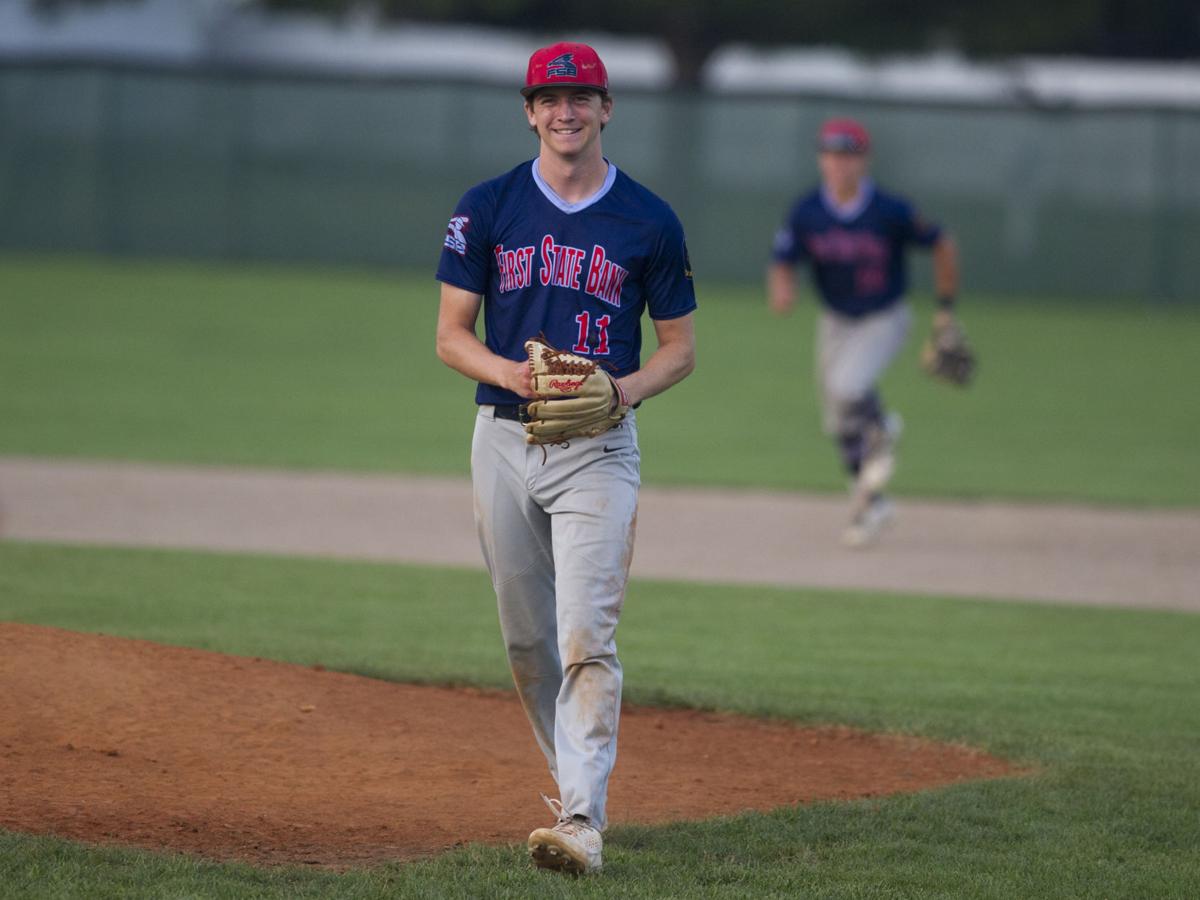 He is the career save leader for the Bergan Knights for reason.

What Benson isn't used to, is having pitched the previous six innings to get to the seventh frame.

First State Bank put the ball in the hands of Benson for the winner-take-all A6 district championship against Gretna Tuesday and the XX delivered, going the all seven frames as Post 20 held off the Dragons 7-3 to claim back-to-back district titles.

"It feels good to come out there and deal for all seven, which I did not expect out of me,” Benson said.

Benson kept Gretna off the scoreboard for the first three frames while First State Bank built up an early lead.

"In the bullpen, I just told him get us as many outs as you can and he just kept on getting better and better," said First State Bank coach Jeff Hayden.

Pitching was the difference in the district title doubleheader. Between Benson and game one starter Dawson Glause, the duo issued just three free passes while allowing 12 hits.

Post 20 was able to draw first blood in the bottom of the first, putting the first three batters aboard with a single and a pair of walks.

Cal Janke delivered in the bases loaded spot, singling to center to score a pair of runs.

After a lead-off double, three straight bunts by the Dragons netted two runs. An errant throw on the first bunt of the sequence halved Fremont’s lead and put another Gretna runner on second.

The third bunt cashed in the second run of the frame, tying the game at 2-2.

"That was a little rough, but I knew my defense was behind me, so I just stuck with it," Benson said.

First State Bank regained the lead in the bottom of the fifth.

Glause got the rally started with a single. Gretna elected to walk Carter Sintek after a sacrifice bunt by

Janke made the Dragons pay for the decision, yanking a fast ball down the third base line, scoring Glause from second.

Camden McKenzie followed suit, ripping a double to right-center field for a pair of RBI and a 5-2 cushion.

Gretna took a run back in the sixth, parlaying a lead-off single into a run with a two-out double.

First State Bank added two more insurance runs in the bottom of the sixth with Sintek wearing a pitch with the bases loaded for the first run followed by a sacrifice fly off the bat of Janke to make it a 7-3 game.

Benson made sure there would be no more seventh inning hijinks from the Dragons.

"I asked (Benson) after the six how he was feeling and he said great, so I told him go get me three more (outs) and that's exactly what he did," Hayden said.

Strikeouts bookended the top of the seventh - Benson's fourth and fifth of the night - allowing ample time for the senior to prepare the wave teammates tackling him for a celebratory dogpile.

"That was the happiest I've been in a long time," Benson said.

"That was huge for Brady to step into that role that he normally doesn't typically play and get us a huge win," Hayden said.

To get the grand finale of the A6 district tournament, First State Bank had to hand Gretna it's first loss of the tournament.

"It’s kind of a weird thing, you come up and you know you have to win two games, but it almost feels like there is less pressure on you that you can’t lose two games," Hayden said.

Seven shutout innings from Glause and a solo shot by McKenzie provided to be the answer as First State Bank claimed a 5-0 victory in the first game of the day.

"Knowing that we had a state tournament that we were eligibility for, we talked a little bit before the game if we were in a situation where we could limit pitches, maybe we take a look at that, but it got to a point where there was no reason to do that because he just kept on going," Hayden said.

Post 20 got the only offense it would need in the top of the second with McKenzie sending the 1-1 pitch over the 325’ sign in left field for a solo home run.

Fremont doubled its lead in the top of the third.

Walks to Ryan Winter and Glause sandwiched Conner Richmond reaching on an error to set up Post 20 with the bases loaded.

Jax Sorensen came through with an RBI sacrifice fly for the lone run of the frame.

Fremont finalized the scoring in fifth, putting up three runs.

McKenzie worked a five-pitch walk with the bases loaded followed by Hunter Mueller slinging a single over the shortstops head for a pair of runs.

Gretna tried to recapture it’s rally Sunday, notching a pair of singles to start the seventh, then loaded the bases on a walk with one out in the frame.

Unlike Sunday, First State Bank was able to escape the jam as Glause induced an infield fly then picked up his ninth strikeout of the day to seal the shutout.

"The seventh inning has been a bit of a tough inning for us, so it was nice to get that off our back a little bit and have two seventh innings where we execute and keep it clean," Hayden said.

Post 20 will face the Millard Sox, the runner-up of the A1 district, in the National Division tournament Saturday in Lincoln.

The Sox won the only meeting of the two teams this year, 4-3 in nine innings in the Elkhorn Wood Bat tournament.

LINCOLN – Facing a deficit for the fourth time in five games in the National Division tournament, the First State Bank Post 20 seniors once ag…

From small-town Nebraska to Tokyo, Maggie Malone has chance at American history at Olympics

Only 10 years ago, Maggie Malone had never competed in javelin. Now, she has a chance at calling herself the best in the world.

First State Bank put themselves in the drivers seat of the state tournament by taking care of Skutt 4-2 Monday night in Lincoln.

First State Bank brought their bats to the state tournament with 14 hits and 12 runs being enough to dispatch the Millard Sox in the opening round of the National Division tournament.

OMAHA—The First State Bank Post 20 Seniors lost a 2-1 game in game one of the Class A Divisional series Friday night.

The game times for the Class A Division Playoffs were set Thursday morning.

College football teams were interested in Dane Pokorny. But rodeo is steering him another direction

Though Pokorny chose rodeo over football, the two have gone hand-in-hand for the 6-foot-3 running back, who is about to enter his senior season.

The First State Bank Juniors were held to just two runs in their state tournament appearance, prompting an early 0-2 exit from the tournament field.

First State Bank Post 20 starter Dawson Glause throws a pitch during Post 20's 5-0 win over Gretna in the first game of the A6 district championship series. Glause went all seven innings without allowing a run while striking out nine.