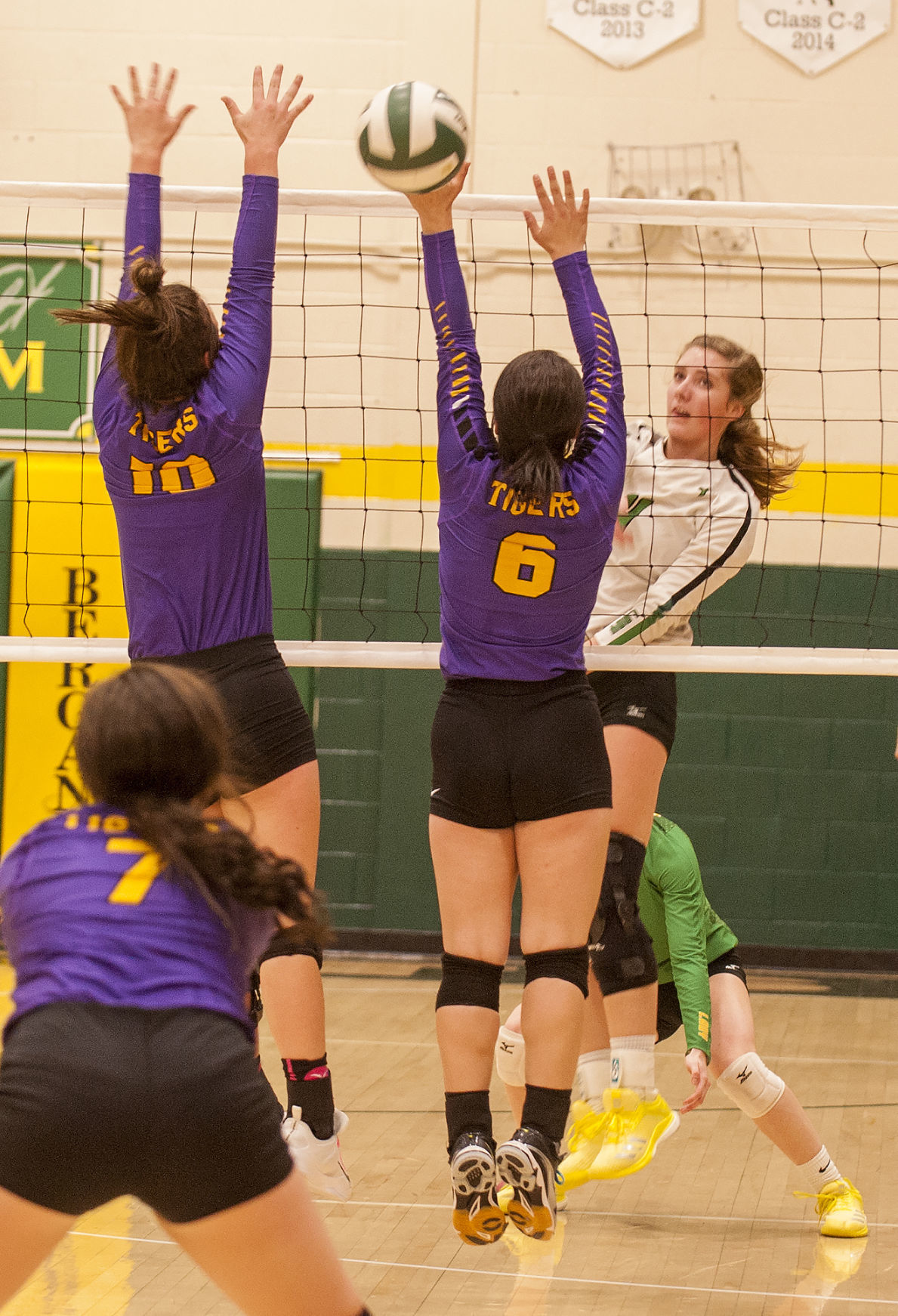 Lexie Langley of Fremont Bergan hits a kill as Anna Wakehouse (10) and Anjolena Hampton of Tekamah-Herman defend during an October game in the Gary D. Schmidt Gymnasium. Bergan won the match 25-8, 25-10, 25-7. Langley, an Augustana recruit, is the honorary captain of the Fremont Tribune All-Area Volleyball Team. 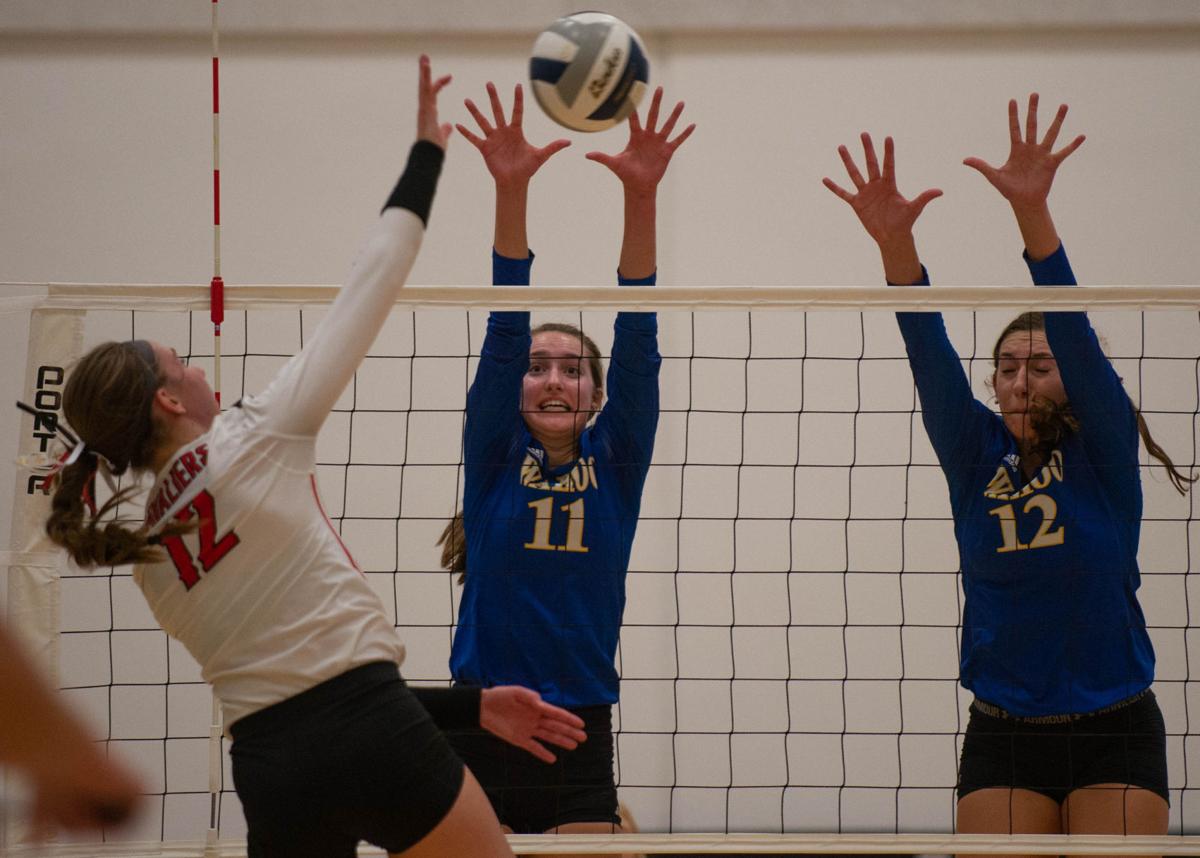 Elle Glock (11) and Wahoo High teammate Kyla Swanson (12) go up for a block against Wahoo Neumann's Kelsie Cada during the Class C1-4 subdistrict final on Oct. 29 at Shelby-Rising City High School. Cada and Swanson are playing for the Red Team in Tuesday night's NCA All-Star Game. 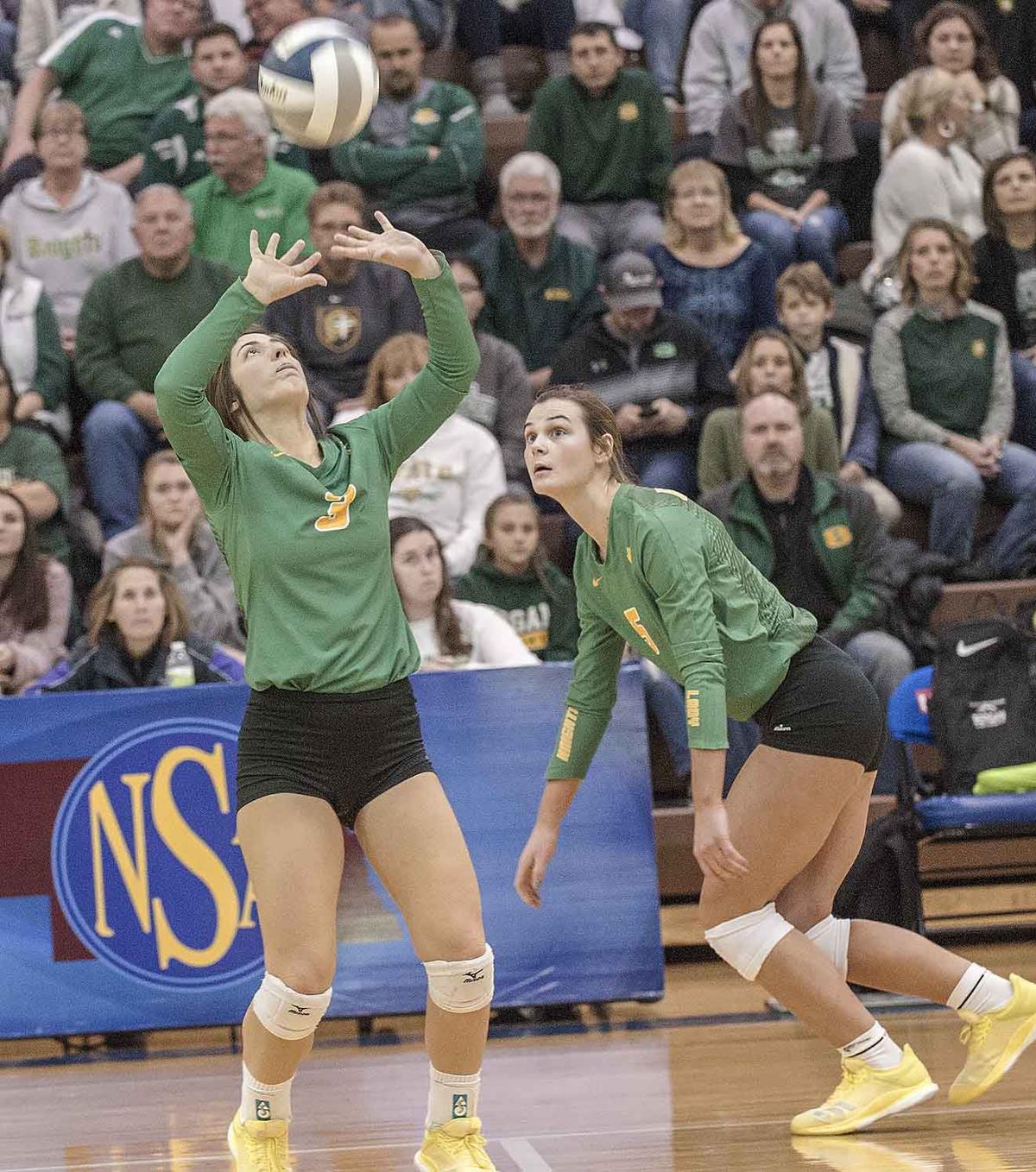 Lexie Langley left no doubt during the volleyball season that she was fully recovered from a dislocated knee suffered in April.

“That knee injury sidelined her from April to August and made her look at other parts of her life like helping to take care of the team,” Bergan coach Sue Wewel said. “She grew up a lot in being a player that was working for everyone else. As the season progressed, I saw a person on the court who calmed everyone down. She had a great calming effect on everyone and a great eye on the court for where to place the ball.”

Langley was a four-year letterwinner for the Lady Knights and helped give Wewel the first state championship of her coaching career.

“Lex has a great sense of seeing the play develop,” Wewel said. “We work every day on where to place the ball and she had a multitude of shots.”

Many may think of Langley as a powerful hitter, but her game involved much more than that.

“Her back row play this year was so much better,” Wewel said. “She got to the ball really well and could read things on where the (opponent) was going.”

Wewel believes Augustana is getting a quality player.

“She has a great passion for the game and will work as hard as anyone,” she said. “I think she can play at the (NCAA Division II) level because she has so many shots and sees the court so well.”

Elly Larson, a 6-0 senior, was also coming back from a knee injury — a torn ACL suffered during the Lady Warriors’ 2017-18 basketball season.

The Wayne State recruit finished with 329 kills, hit .262 and recorded 332 digs. She had 20 kills in Wahoo’s five-set win over Lincoln Lutheran in the C-1 final.

Larson is the school’s career leader in kills with 1,261, but her sister may break that before her career is done.

Mya Larson joined Swanson and Glock on the Lincoln Journal Star’s Super State second-team. She had 24 kills in the state final.

Dieckmann, a 5-4 senior, is one of two setters on the first team, joining Glock.

“I said to her that I was going to try and make her into a setter and I gave her a number of reasons,” Wewel said. “I told her she is competitive and driven to play sports. She is an even-keel individual and that is really a great attribute to have as a setter.”

Wewel said Dieckmann didn’t have experience as a setter in junior high, but she learned the position quickly.

“It comes naturally to her because she has the speed, quickness and court smarts to be a very good setter,” the coach said. “She is just at the tip of the iceberg because she has so much more learning to do. My wish for her is that she can get a really good college coach who will train her the right way. I think she can be even better at the next level.”

The daughter of Bergan assistant coach Kim Dieckmann is considering various college offers, including from Doane and Nebraska Wesleyan.

When Kempf, a 5-9 middle hitter, graduates in May, she will end her career as four-year letterwinner in three sports. She helped Bergan qualify for the C-2 state basketball tournament last winter and also placed sixth in the Class C long jump at the state track meet.

“She is so aggressive and is a true gamer,” Wewel said. “She rises to the occasion in the big games. She is a definite competitor and you see that on the basketball court, too.”

“She has the whole package in that she has a 28-inch vertical jump and has quickness and speed,” Wewel said. “I just always look forward to watching her play because she can rip a defense apart. She knows exactly where to put the ball.”

Cada, a 6-1 senior, recorded 437 kills while leading the Lady Cavaliers to the state semifinals where they lost to Wahoo High in four sets.

“Kelsie had a phenomenal season and career here,” Neumann coach Brandi Sladky said in nominating Cada. “She was a tremendous player for us all four years.”

Cada broke her own school record for kills in a season with 437. She is also the school’s career leader in kills with 1,468. She added 1,267 digs, including 453 as a senior, in her four-year career.

The 6-4 Swanson will play her college ball at the University of Illinois.

Swanson began her prep career at Minden, but transferred to Wahoo and played the last two two seasons for coach Trish Larson. Wahoo won 69 of 73 matches the past two years, including back-to-back state titles.

Glock, a 6-0 sophomore, moved from outside hitter to setter this season. She finished with a school record 1,133 set assists. That mark is also the best all-time in Class C-1.

At the state tournament, Glock was at the top of her game. She finished with 146 assists during the Lady Warriors’ three wins. She had 52 in the victory over Lincoln Lutheran.

OMAHA — The Fremont Bergan Lady Knights moved to 3-0 on the season as they outpaced Omaha Brownell-Talbot on Friday.

Lexie Langley of Fremont Bergan hits a kill as Anna Wakehouse (10) and Anjolena Hampton of Tekamah-Herman defend during an October game in the Gary D. Schmidt Gymnasium. Bergan won the match 25-8, 25-10, 25-7. Langley, an Augustana recruit, is the honorary captain of the Fremont Tribune All-Area Volleyball Team.

Elle Glock (11) and Wahoo High teammate Kyla Swanson (12) go up for a block against Wahoo Neumann's Kelsie Cada during the Class C1-4 subdistrict final on Oct. 29 at Shelby-Rising City High School. Cada and Swanson are playing for the Red Team in Tuesday night's NCA All-Star Game.