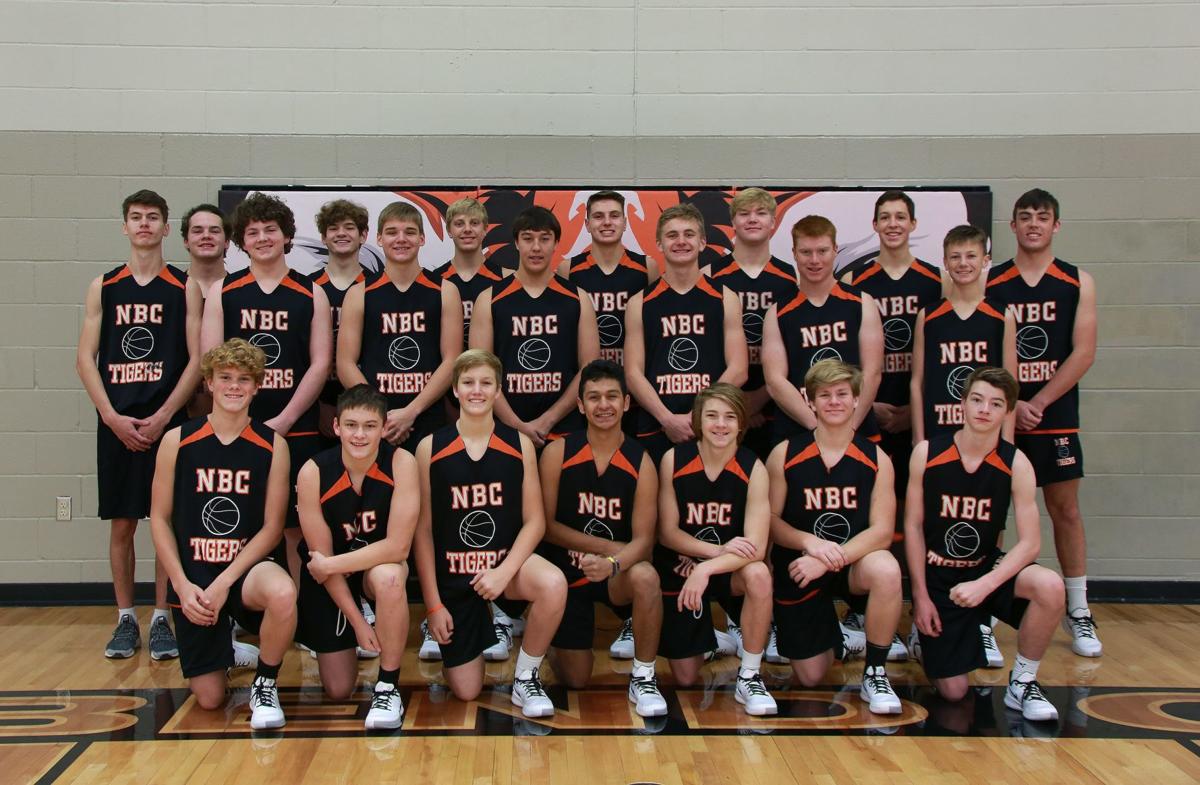 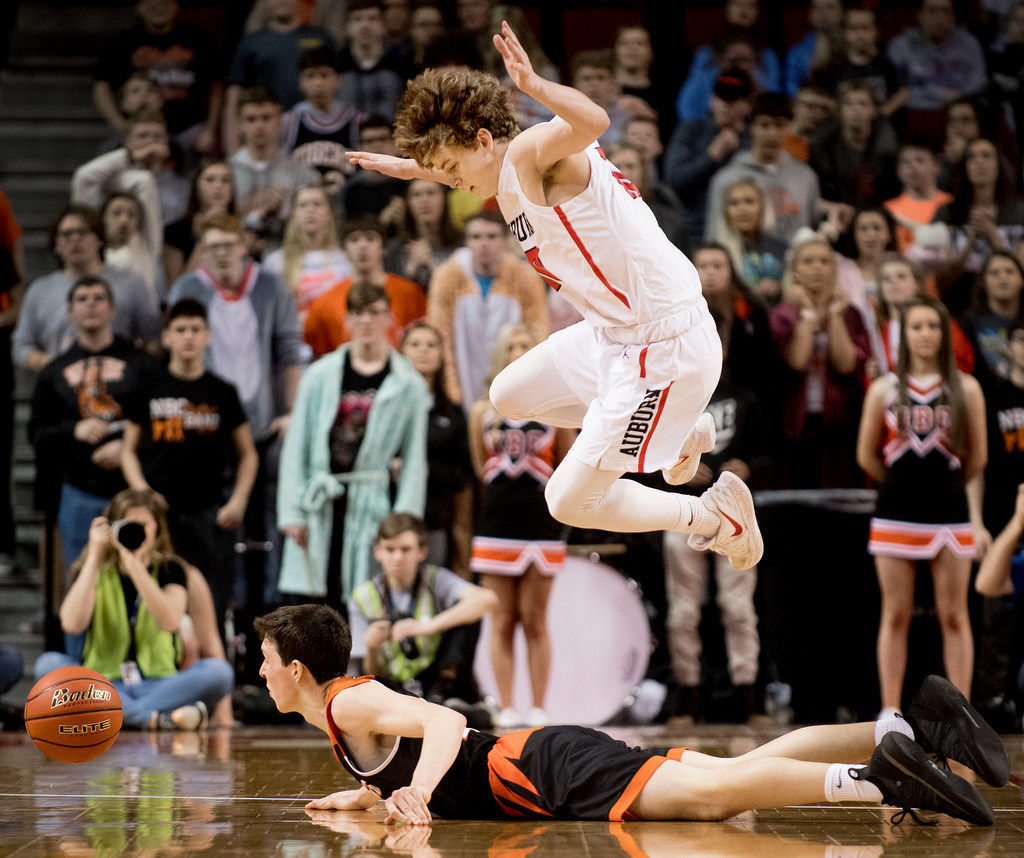 Jaxon Wietfeld of North Bend lunges for a loose ball while Brody Darnell of Auburn leaps over him during the Class C-1 state championship game in March at Pinnacle Bank Arena in Lincoln. Auburn won the game 30-29. 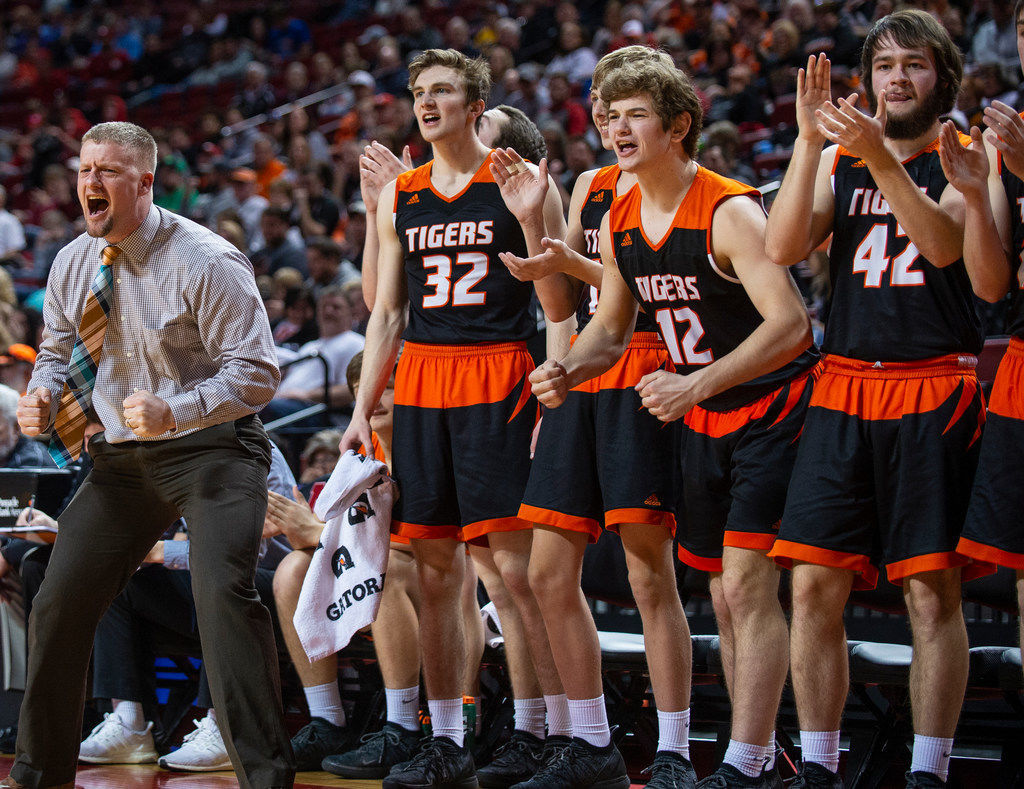 North Bend coach Jon Baehr and some of his players cheer on the Tigers during a 64-44 win over Ogallala during a 2019 Class C-2 state semifinal tournament game at Pinnacle Bank Arena in Lincoln.

North Bend coach Jon Baehr was asked if finishing as the state runner-up has served as motivation for the Tigers as they enter the 2019-20 season.

"That is a great question," said Baehr, who led the Tigers to a 25-4 record last winter. "I think for us, trying to keep the perspective of falling short on a last-second shot was difficult for the guys to work through and maybe for me as a coach, too. I think they recognize going through the process that we have the ability to do it (win a state title) and it isn't far-fetched or anything. As far as motivating them, I don't think they needed any extra motivation. I think there is just the realization of what they can achieve if things work out the right way."

The Tigers graduated some key players from last year's team, including cousins Tanner Wietfeld and John Emanuel. Both players surpassed 1,000 points for their career, but Baehr likes the potential of this season's roster.

"I think it all started for us in the offseason in the weight room with a lot of our kids," Baehr said. "We have a great weights coach in Rob Brokaw and it was important for our kids to get bigger and stronger. On the basketball side, we had a lot of kids participating in our own camps and going to open gym. We also had a lot of different kids playing on AAU teams in July. I feel like we had good growth during the course of the summer."

"I think anytime you have kids that are successful in multiple sports that helps their confidence grow," Baehr said. "We've got some guys that had great football seasons and that will only help them when they get into big moments during the course of the basketball season."

One of those players is Austin Endorf. The 6-foot-3 senior quarterbacked the Tigers to back-to-back football postseason appearances. In basketball, he averaged 5.7 points, 3.6 rebounds, 2.3 assists and 1.6 steals as a junior.

"I think Austin will step up and continue to be a good leader for us," Baehr said. "I think you'll also see Jaxon Wietfeld continue to grow."

"He had 110 assists for us last year and he'll continue to distribute the ball for us and also score," Baehr said.

Also back are lettermen Breckin Peters, a 6-0 junior, who averaged 3.7 points and 2 rebounds per game, and Cody Prohaska, a 6-1 senior. Both could help Endorf and Jaxon Wietfeld in picking up some of the scoring slack from the players lost to graduation.

"Breckin is another guy that can score the ball and Cody Prohaska had a dynamite summer," Baehr said. "He played AAU for the first time this summer and it has really aided his growth. A young kid that can shoot it really well is Brodey Johnson (a 6-1 sophomore). I think he'll step up and score some for us and we also have some nice role players like Austin Taylor (6-2 junior) and Cody Pospisil (6-1 senior). I think we'll be balanced, but we'll shoot it fairly well and offensively we'll be tough to deal with at times."

Baehr said the Tigers will likely have a seven-player rotation at the start of the season, but Cole Johnson, a 5-11 senior, and Landon Krenzer, a 6-4 junior, are vying for an eighth spot.

"Cole is a tremendous athlete and a hard worker who had a tremendous football season," he said. "Landon could possibly do that, too. It will just be who takes hold of it."

Baehr said the Tigers showed a lot of improvement over the summer, but several will be in new spots on the team.

"Some guys will be stepping up into new roles," he said. "Defensively, we'll have to grow a bit as a unit. We have some nice pieces, but we don't have a tree topper that can be a great shot blocker. Figuring out our roles is something that we'll need to do early on."

The Tigers open the season Dec. 5 at Twin River before hosting Class B's Seward on Saturday. The East Husker Conference will be a grind again with Class C-2 defending champion BRLD, the Tigers, Logan View/Scribner-Snyder, defending D-1 champion Humphrey/Lindsay Holy Family and Oakland-Craig among the talented teams in the league.

"The top part of our conference will be very tough and very talented," Baehr said. "It will be challenge for us."

The coach, though, is confident in his team.

"Without overstating it, I think we can carry over a lot of the things we did this summer into the season," he said. "I think we have a chance to be a really special team down the line."

Goal line stands lifts No. 3 Bergan past No. 1 Oakland-Craig

OAKLAND - Bergan staked its claim as the best team in Class C-2 Friday night, knocking off No. 1 Oakland-Craig 28-24 and in the process ended …

NORFOLK—Fremont senior Alyssa Walters came into the 2020 season with one goal in mind—ending her career at Norfolk Country Club.

Fremont Bergan won the battle of ranked Lady Knights, storming back from a 0-2 deficit to knockoff Oakland-Craig Tuesday night 3-2 (21-25, 12-…

Fremont receives No. 12 seed in Class A football playoffs

The regular season came to a close on a sour note for Fremont, falling 40-7 to No. 10 Millard North.

Bigsby takes second in Class A No. 1 singles

OMAHA—Fremont’s Alex Bigsby secured his spot in the Class A No. 1 singles semifinals with a pair of wins on the opening day of the state tourn…

Two of the top runners in Omaha on Thursday showed they’ll also be state title contenders at next week's state cross country meet.

Jaxon Wietfeld of North Bend lunges for a loose ball while Brody Darnell of Auburn leaps over him during the Class C-1 state championship game in March at Pinnacle Bank Arena in Lincoln. Auburn won the game 30-29.

North Bend coach Jon Baehr and some of his players cheer on the Tigers during a 64-44 win over Ogallala during a 2019 Class C-2 state semifinal tournament game at Pinnacle Bank Arena in Lincoln.