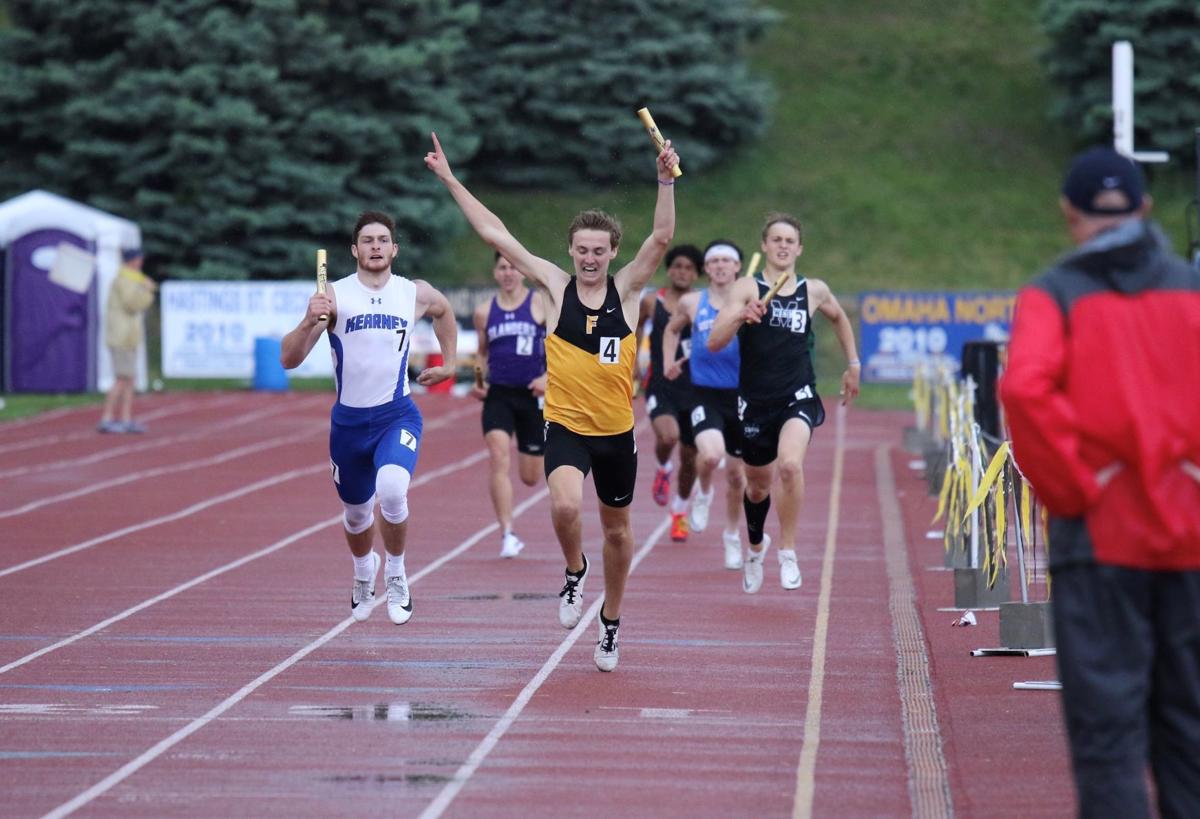 Fremont High School senior Wes Ferguson holds up his arms in victory as he crosses the finish line in the 1,600-meter relay Saturday afternoon at Omaha Burke. Ferguson, Lucas Arps, Jose Gonzalez and Ross McMahon combined to win the race -- and an all-class gold medal -- in 3:21.96. The performance helped the Tigers win the team championship. 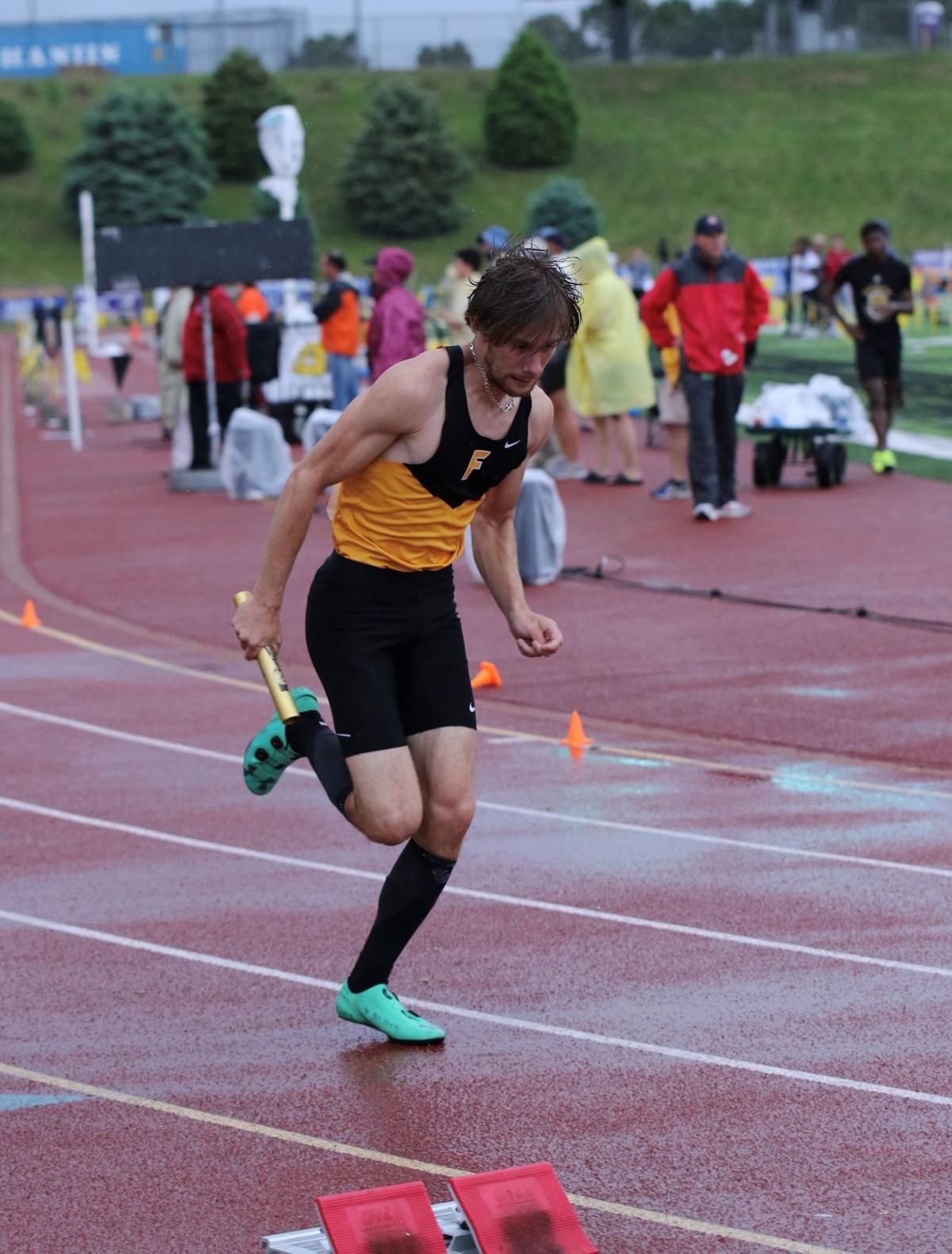 Senior Lucas Arps of Fremont High School competes in the 1,600-meter relay on Saturday in the state track meet at Omaha Burke. Arps helped the Tigers win the race and the team title.

Fremont High School senior Wes Ferguson holds up his arms in victory as he crosses the finish line in the 1,600-meter relay Saturday afternoon at Omaha Burke. Ferguson, Lucas Arps, Jose Gonzalez and Ross McMahon combined to win the race -- and an all-class gold medal -- in 3:21.96. The performance helped the Tigers win the team championship.

Senior Lucas Arps of Fremont High School competes in the 1,600-meter relay on Saturday in the state track meet at Omaha Burke. Arps helped the Tigers win the race and the team title.

OMAHA — Most pundits thought the team race for the Class A boys state track championship would come down to the final race — the 1,600-meter relay — on Saturday at Omaha Burke.

Fremont High School, though, put to rest any doubt about who the best team was long before the 4x4 was completed. The Tigers finished with 81 points and won four all-class gold medals on their way to the team title. Defending state champion Lincoln High was second with 57 while Lincoln Southwest was third with 55.

“We had it projected to be under 10 (points) separating us, Lincoln Southwest and Lincoln High,” Fremont coach Dave Sellon said. “We really did think that last race of the meet would decide a lot. We just had what we like to call a synergy meet where the snowball gets rolling down hill and the power of the positive outcomes gets contagious.”

Senior Wes Ferguson got the Tigers off to a strong start by winning the Class A 800 meters in 1:52.85. Ferguson’s time also earned him an all-class gold medal — one of three that the University of Nebraska at Kearney recruit won — and was the 10th-fastest all-time in Nebraska history. It is second on the Tigers’ all-time charts behind Ty Hansen’s state gold-medal time of 1:52.63 in 2015.

Ferguson was just part of a talented senior class that took care of business at Burke.

“Our team chemistry was something special,” Sellon said. “That really showed during the two-day meet. They were on a mission and they wanted to get it done.”

Ferguson added his second all-class gold by winning the 400 meters in 49.07. Teammate Lucas Arps, the 2018 all-class gold medalist, was fourth in 50.32 and was one of the first to congratulate Ferguson.

“Lucas’ goal was to just do the best he could for the team and he wanted the best out of his teammates,” Sellon said. “He had a winter injury that put him behind in his training at the start of the season, but he has been a great competitor for us from the time he was a freshman until now. He has been extremely valuable to us for all four years. We were very pleased to see him medal in the 400 and then lead off our 4x4 the way that he did.”

Ferguson and Arps joined Jose Gonzalez and Ross McMahon to earn the all-class gold in the 1,600-meter relay in 3:21.96. The event was delayed by about an hour due to bad weather. That time is the fifth-best in FHS history, Sellon said.

“We started warming up really early for that race and then we heard the thunder,” Gonzalez said. “We just wanted to get out there and race and get that trophy, but it didn’t happen that way. We had to wait and wait, but we still had motivation. We wanted to win that race and get another gold.”

Sellon said he was proud that the 4x4 crew wanted to finish strong.

“I had some questions in the back of my mind about what the motivation factor would be at the end of a two-day grind of a meet and if they’d all have enough left in the tank to put on a big performance,” he said. “I knew it would take a big performance based on how the other teams were stacking their relay, but those four guys responded really well. They had the meet won already, but they absolutely wanted to finish it on a high note.”

Senior Austin Everitt also finished his career on a high note. He placed second in the long jump with a leap of 21-8.

“My goal was to finally get a good jump at state because I’ve never had one of my better jumps (at Burke) until now,” he said. “It felt good to get eight points and to help the team. I had been inconsistent this year so I’m happy to close it out like this.”

Sellon said it was a well-deserved medal.

“Austin is such an all-around great kid,” he said. “He is active in so many things in school. I’m so happy for him to be on top of his game to end his career.”

Everitt also signed to compete in track a UNK. He is happy to help the Tigers to a team title.

“This is probably one of the best feelings you can have in this sport,” he said. “We’ve all been working on this since we got to high school.”

Gonzalez, a Midland University recruit, won the all-class gold in the 1,600 in 4:19.71. His victory mathematically wrapped up the championship.

Gonzalez held off the challenge of Adam Murphy of Millard West and Grant West of Omaha Creighton Prep to win the championship.

“Jose’s win was huge for the team because the meet was mathematically over,” Sellon said. “But it was also very satisfying for all of us. He’s battled some injuries during his career and missed his sophomore season with a bone issue in his foot that needed surgery. He was in command the whole way.”

“I was a little bit disappointed Friday,” Gonzalez said. “We were solid in the 4x8 but Prep ran a fantastic race. I thought I could’ve done a little bit better in the 3,200 so I really wanted to have a good day (Saturday). I was motivated.”

Sellon said the seniors accomplished something no one can take away.

“This has been a mission of this class and the program has been aiming for this for several years,” he said. “You have to give credit to the 2017 seniors that taught these guys how to do things. Last year’s seniors were very competitive and we were very close (a third-place state finish), but things didn’t work out. This group embraced the whole thing. They grabbed it and did it. This is their victory.”