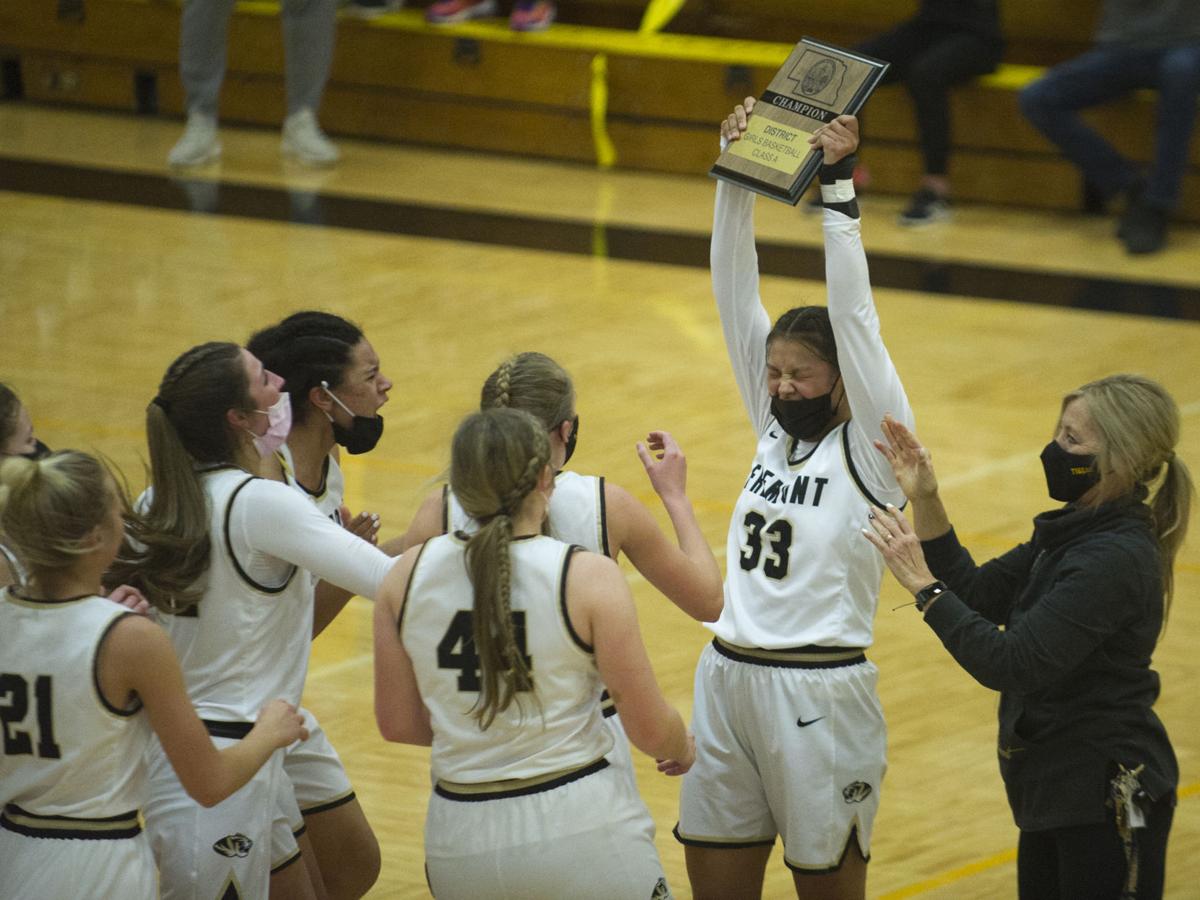 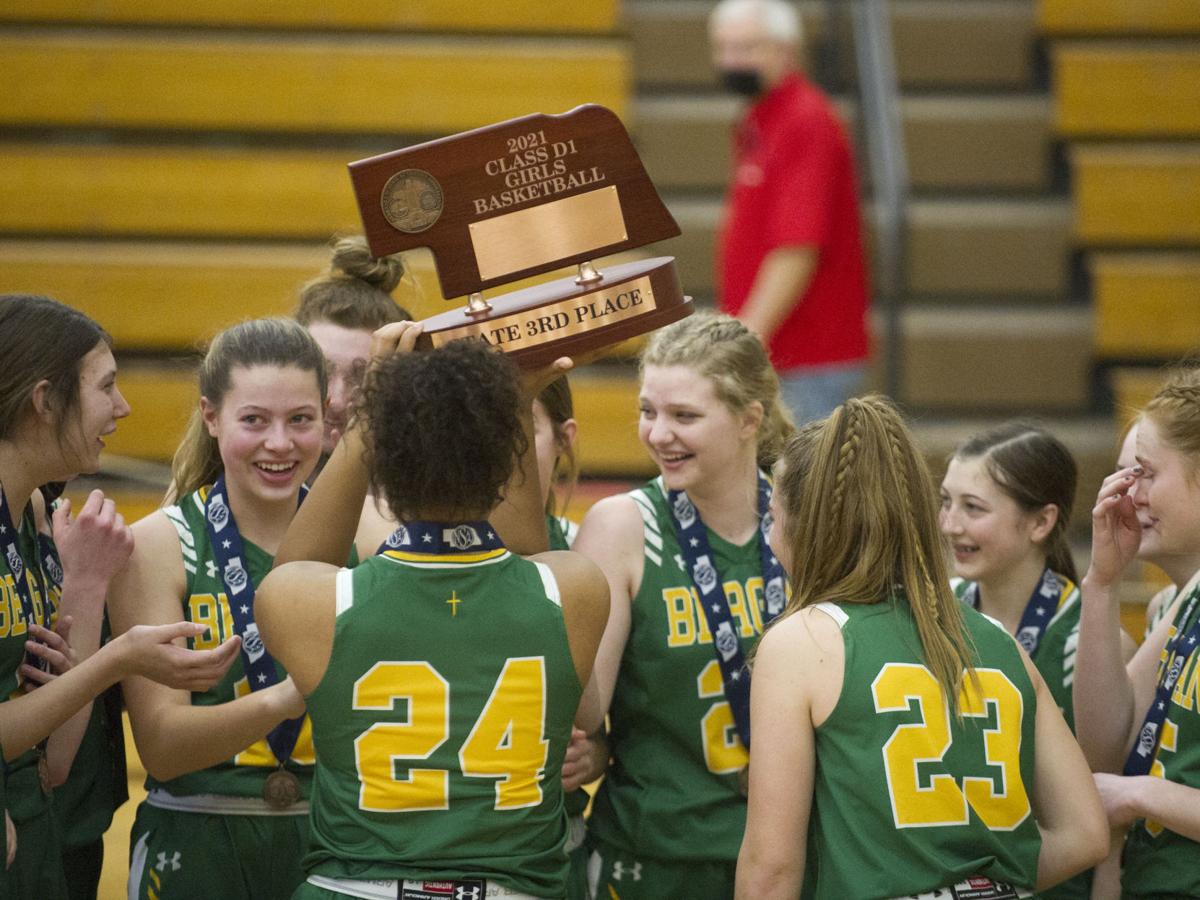 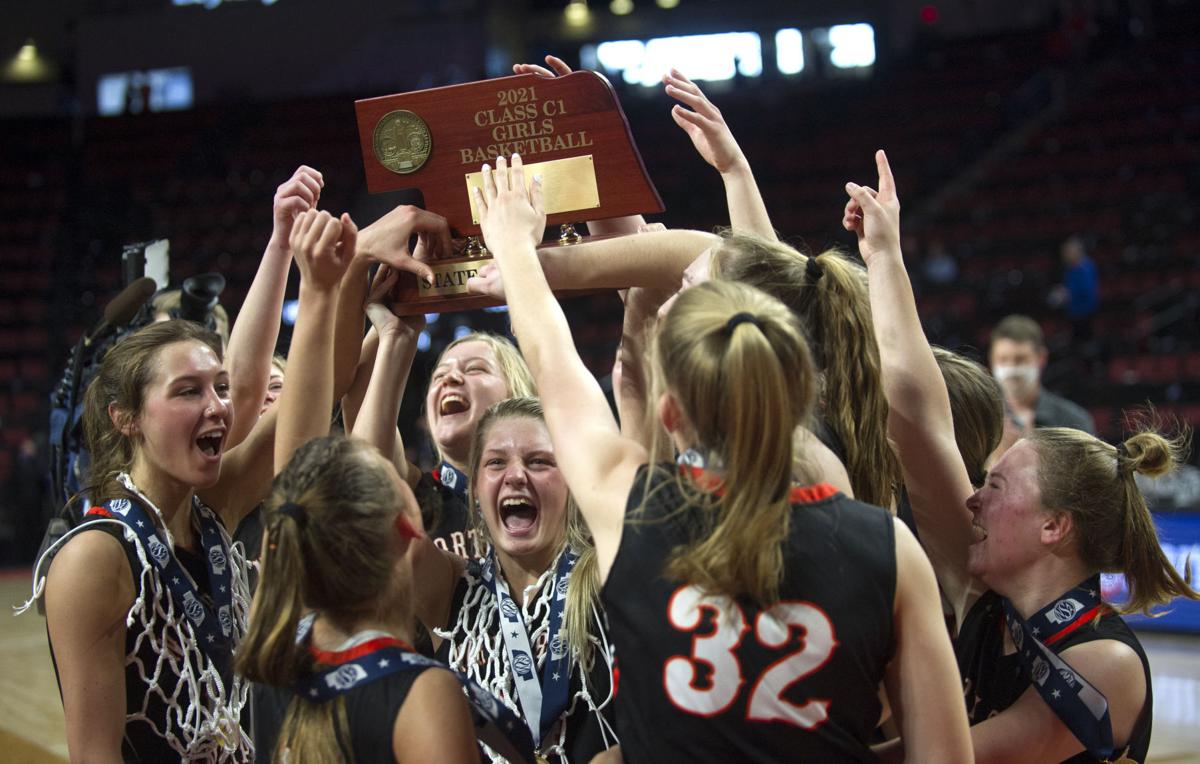 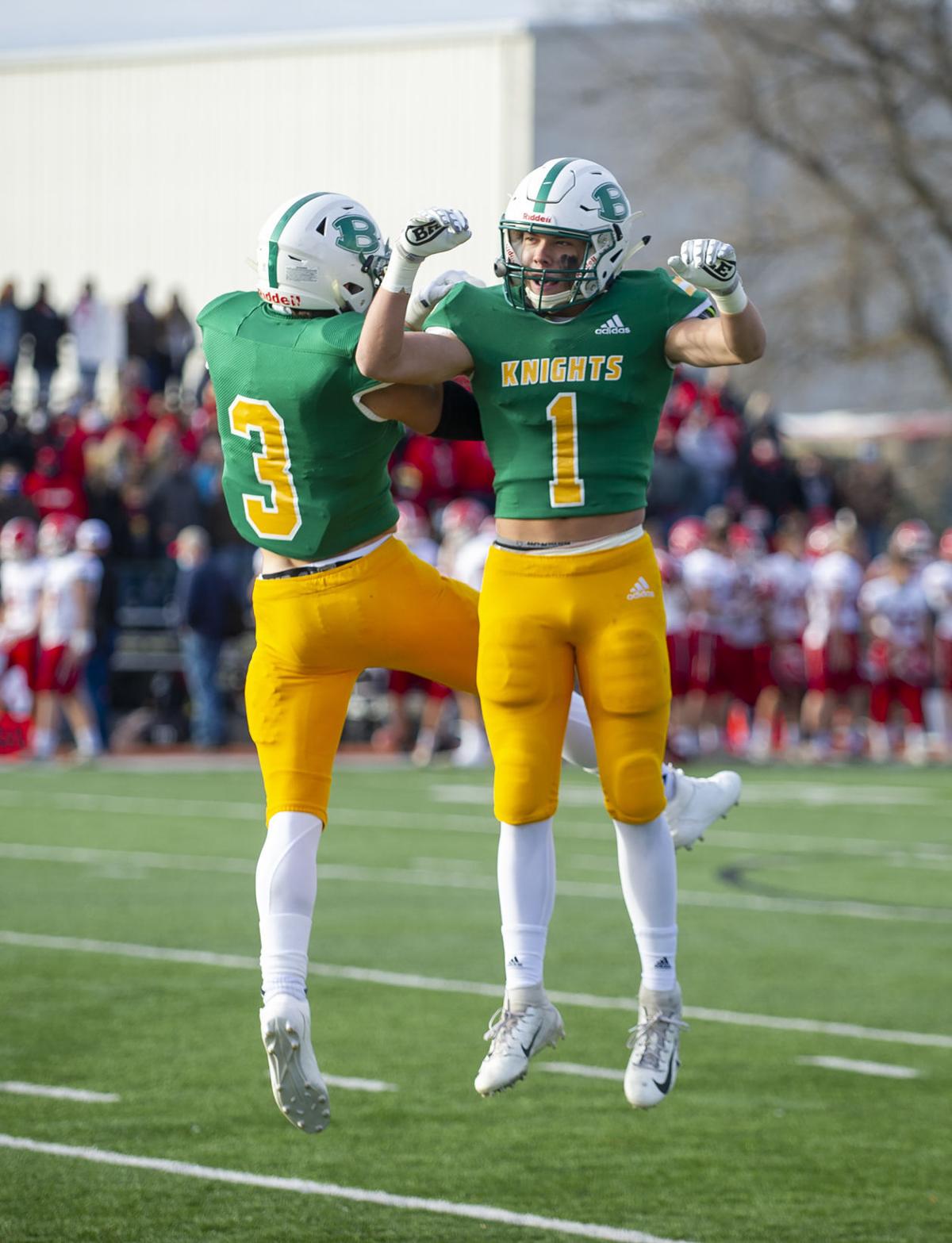 Fremont Bergan junior Issac Herink (1) and Jarett Boggs (3) chest bump prior to the start of the Class C-2 championship game Friday against Ord at Heedum Field. 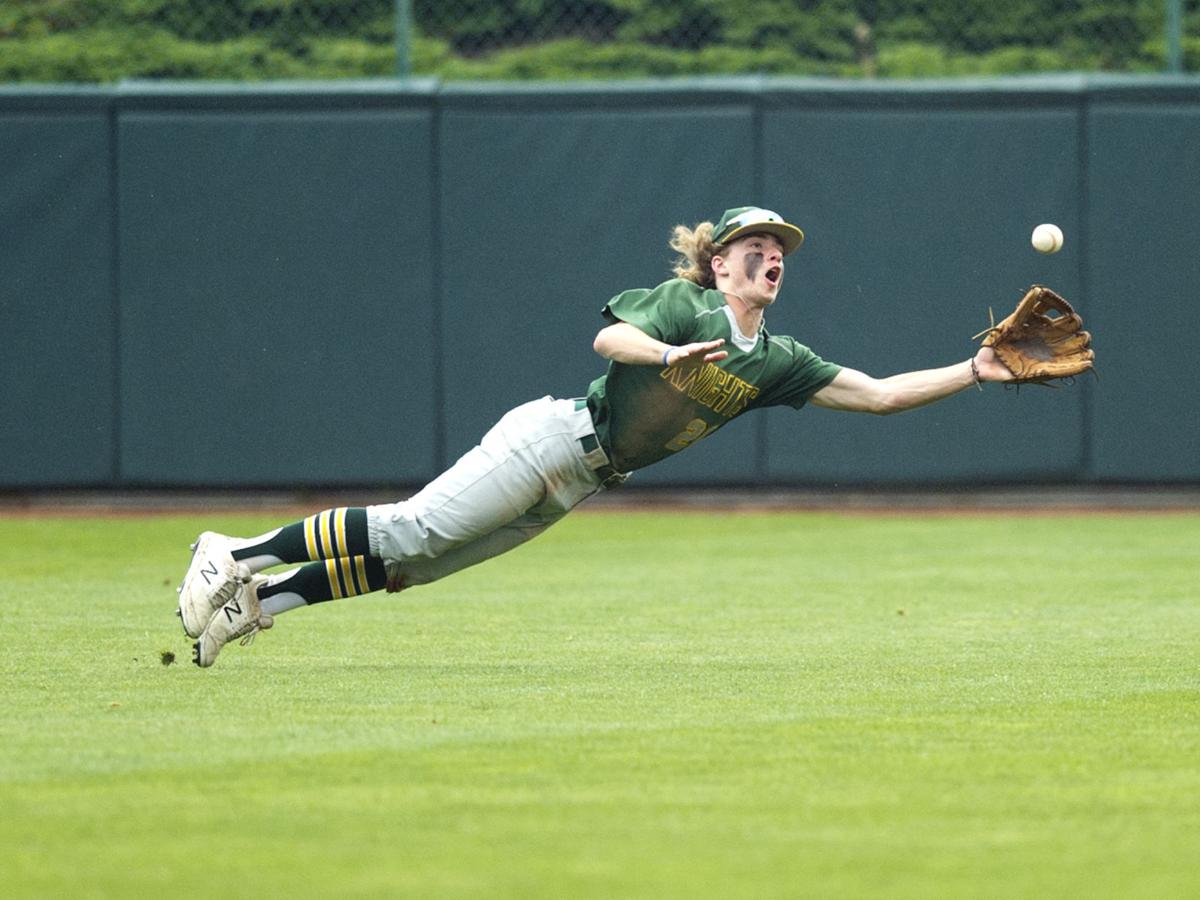 Bergan centerfielder Jax Sorensen makes a diving catch in centerfield in the second inning of the Knights 11-3 win over Lincoln Southwest Monday at Haymarket Park. 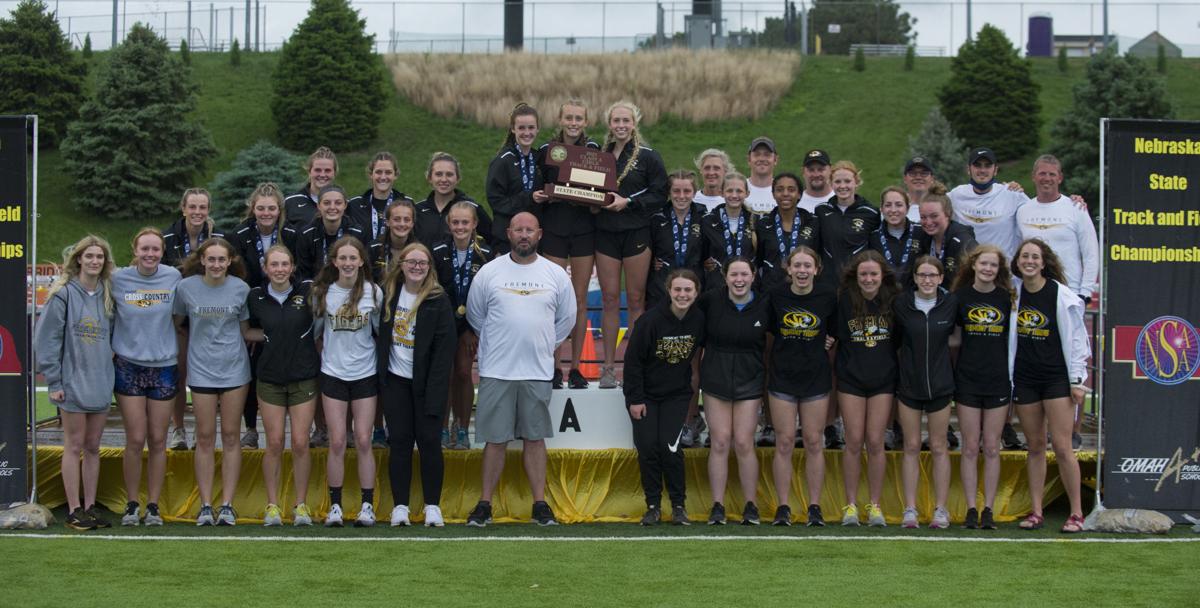 The Fremont girls track team poses for a photo with the 2021 Class A girls state championship trophy. 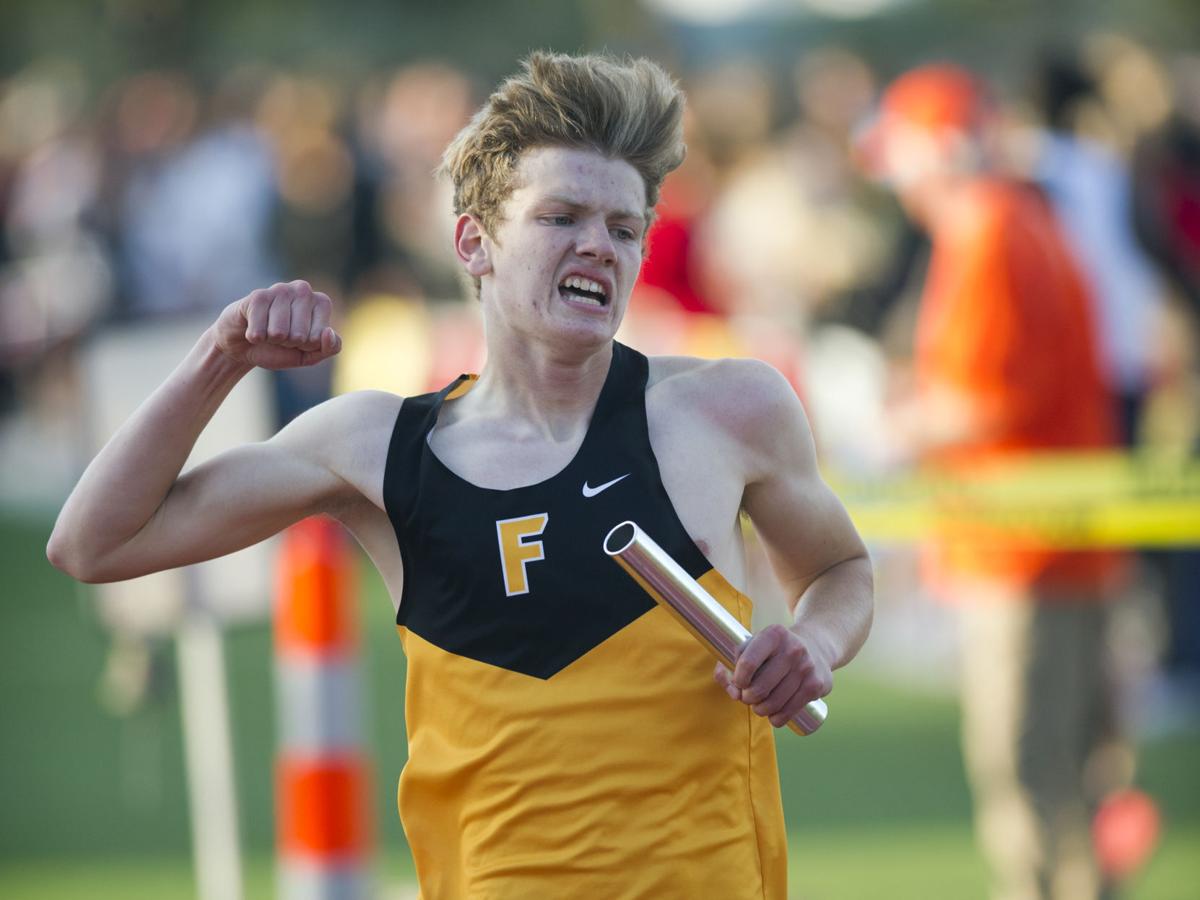 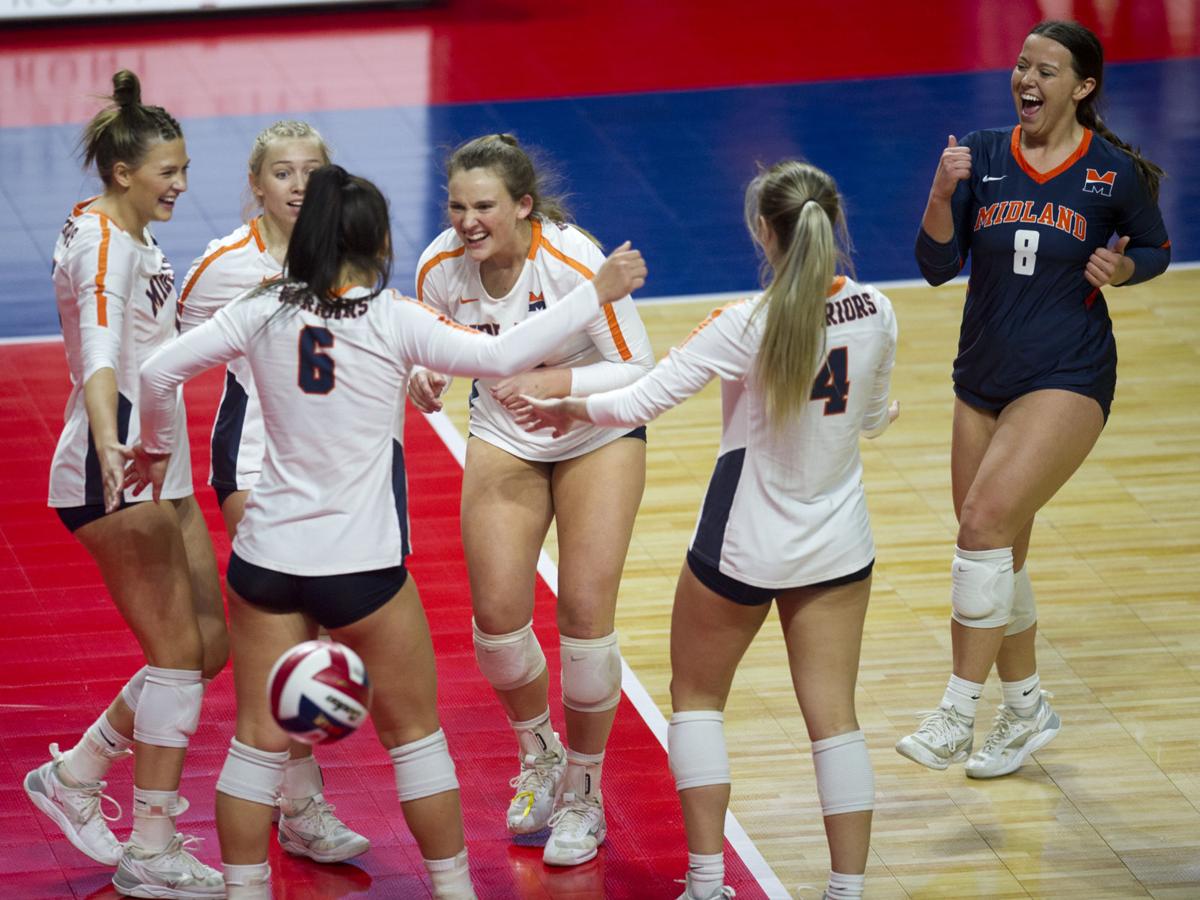 The Midland volleyball team celebrates a point in the first set of the Warriors 3-2 loss to Missouri Baptist in the NAIA National Championship game Saturday, May 1, in Sioux City, Iowa.

At the end of every academic year, I take a good chunk of a day to sort through the previous year’s papers, clipping out the stories and photos I want to hold on to.

At the end of last spring, many—including myself—feared this fall and the following season may not happen because of the pandemic.

When the balls were finally rolled out to start the year, the Fremont-area athletes were there to put their best foot forward.

Bergan ran the table all the way up to a runner-up finish in Class C-2.

The Knights' offense blossomed as Koa McIntyre broke what felt like every single season quarterbacking record there was.

Carter Sintek’s breakout at quarterback after being thrust into the starting role just a quarter into the season.

And Midland compiled a 5-3 mark with all three loses coming against NAIA playoff qualifiers.

For most places, that’d be enough to celebrate a job well done in the athletic realm, but not here.

The Fremont cross country teams captured the boys Class A title while the girls took home a bittersweet runner-up team finish. You know you have a strong program when bringing a second-place finish is an anticlimactic end to the season.

On the volleyball court, Bergan head coach Sue Wewel turned a young core into the Class D runner-up, which also picking up her 700th win in the process.

Fremont’s Alex Bigsby capped off a stellar career with a runner-up finish in the No. 1 singles bracket at the Class A state tennis tournament.

A change of seasons didn’t slow the Fremont-area’s championship pace.

As a side note, I am glad the NSAA approved the sanctioning of girl’s wrestling in the state. While the Nebraska Scholastic Wrestling Coaches Association tournament had a wonderful grassroots feel to it, those athletes deserved the right to try and etch their name in history under the bright lights of the CHI Health Center.

On the boys side, Fremont’s Tommy Wentz, Garrett Moser and Benny Alfaro all earned their spot on the Class A podium.

In a year that required perseverance from everyone, Moser set an example by rehabbing back from a broken ankle to finish out his senior season.

Bergan’s Cal Janke took home his first state placement and will have two more years to better his fifth-place finish.

The state wrestling tournament was highlighted by Arlington’s Josh Miller. The senior completed his perfect season with a state crown, doing so just mere hours after getting eight stitches put in his head after getting cut open in his semifinals match.

In the pool, Karsen Jesse brought home an eighth-place finish in the 200-yard freestyle during a season in which she was also the HAC champion in the race.

On the hardwood, the Fremont girls basketball team lit up the scoreboard night in and night out all the way up to a Class A runner-up finish—the highest placement in the program’s history.

Taylor McCabe was once again the superstar the state has come to expect, but the Lady Tigers might have had the most talented and basketball savvy roster in the state.

Four out of the five starters for Fremont have signed to play college basketball—McCabe to Iowa, Charli Earth to Concordia, Macy Bryant to Nebraska-Kearney and Bella Keaton to Buena Vista.

Oh, and most of that line-up is back next year to take another crack at the crown with just Earth moving on to college ball.

Bergan, powered by Lauren Baker, returned to Lincoln for a fourth-straight season with the senior eclipsing 1,000 points during the postseason run that saw the Knights bring home a third-place finish.

That week in Lincoln rivaled every other week during the winter save for maybe the week of Christmas.

Yutan’s Brady Timm hit what easily could have been the shot of the year in the boys state tournament to get the Chieftains into the semifinals, capping off a fantastic career with his fourth state medal.

The spring was just as bountiful.

The Midland women’s volleyball team, four months removed from completing their regular season, took the NAIA tournament by storm, battling all the way up to a national runner-up finish—the highest in program history.

Bergan baseball had the best season in the program’s tenure, securing the No. 1 ranking in the Class A briefly after winning its first-ever HAC tournament championship and showcased its talent down at Haymarket in the Class A state tournament.

Fremont’s cross country success carried over to the oval with the Lady Tigers claiming its first-ever state title in a team race that came down to the final race of the night.

At the same time, the Fremont boys added a runner-up finish in the team race.

On the tennis court, Fremont’s Abbie Bigsby became the second Bigbsy to reach the podium at state tennis, finishing sixth in No. 2 singles to become the first Lady Tiger to medal in 13 years.

After the lows of last spring’s nothingness, I had hoped to maybe get to cover one or two championship-level events.

What I was treated to was a bountiful harvest of excitement day after day in a historic year for Fremont athletics.

So, when I sit down to pack away this past year, it may take a little longer than normal. There are a lot of stories to reminisce on.

How could the rest of the Bucks Nets series shape out?

How could the rest of the Bucks Nets series shape out?

NBA Finals: What is the best result for the books?

NBA Finals: What is the best result for the books?

Muller named Employee of the Year at Central Community College-Columbus

Jerry Muller of North Bend has been named the Employee of the Year at Central Community College-Columbus.

Calendar of events for June 5-7

Find out more about the area meetings and events planned for June 5-7.

Fremont Bergan junior Issac Herink (1) and Jarett Boggs (3) chest bump prior to the start of the Class C-2 championship game Friday against Ord at Heedum Field.

Bergan centerfielder Jax Sorensen makes a diving catch in centerfield in the second inning of the Knights 11-3 win over Lincoln Southwest Monday at Haymarket Park.

The Fremont girls track team poses for a photo with the 2021 Class A girls state championship trophy.

The Midland volleyball team celebrates a point in the first set of the Warriors 3-2 loss to Missouri Baptist in the NAIA National Championship game Saturday, May 1, in Sioux City, Iowa.