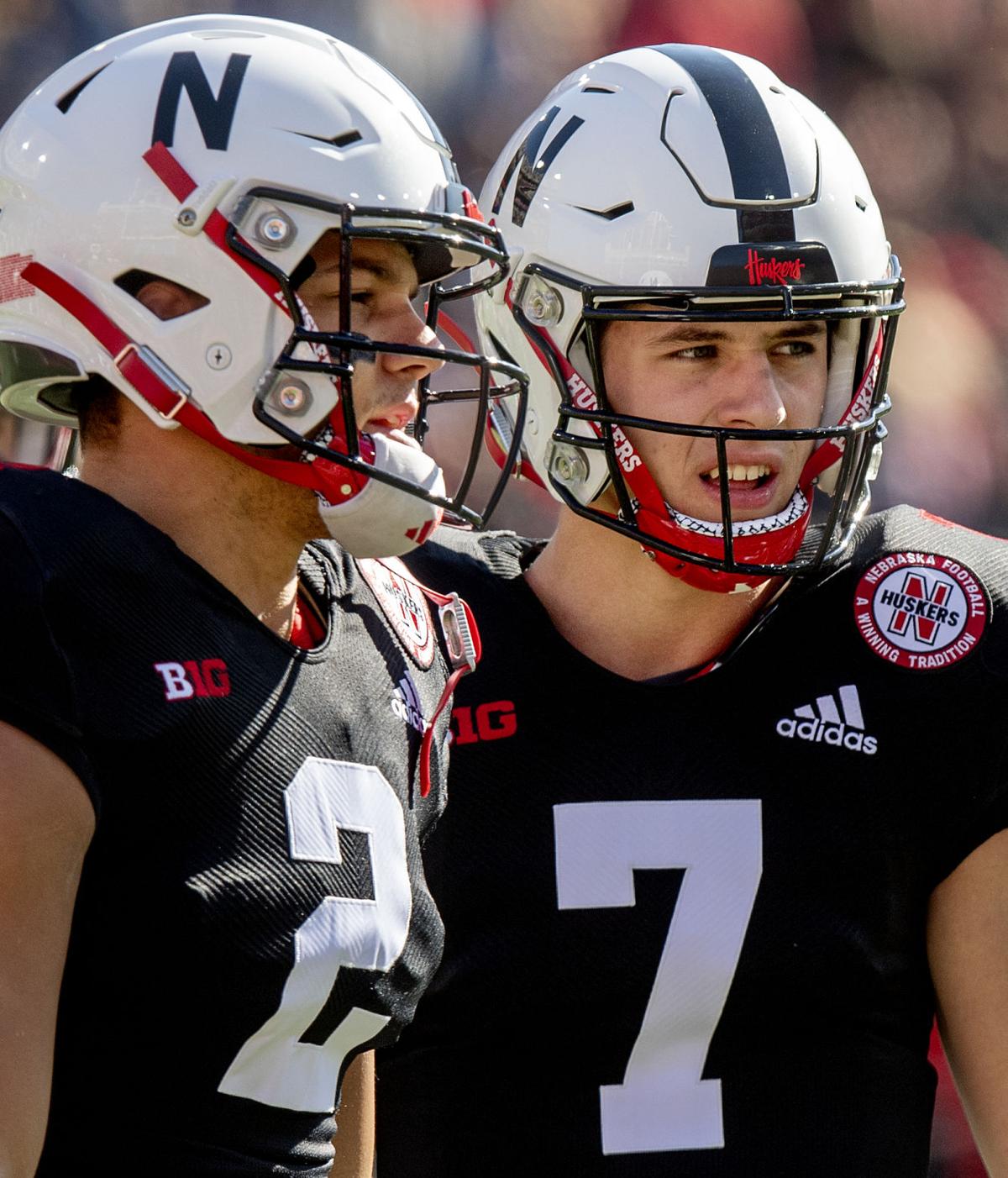 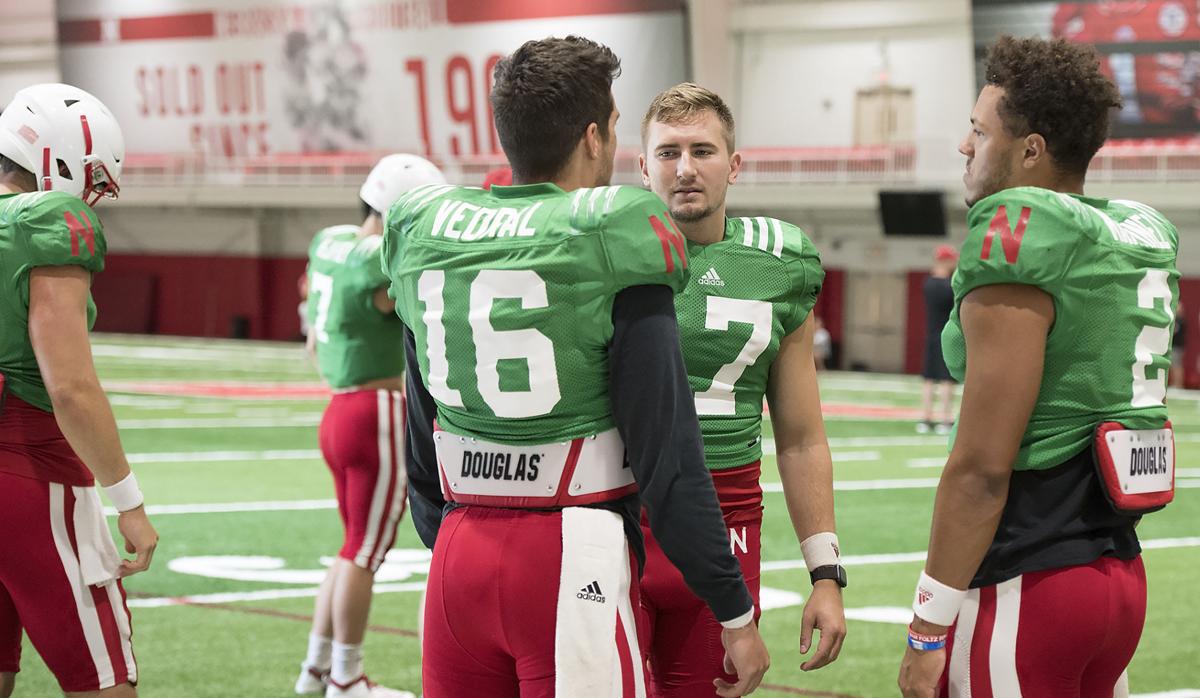 1. With junior quarterback Noah Vedral off to Rutgers, Nebraska is left with three scholarship players at the position.

“Obviously feel good about Adrian going forward and the progress he’s going to make,” Frost said. “Luke McCaffrey had a really good freshman year and is turning into a fine quarterback that I think will be able to win a lot of games around here.

Vedral says transfer decision was tough, leaves for Rutgers 'with a lot of love for Nebraska'

“Logan Smothers is already on campus and has done good things for us. We’re in good shape at that position.”

2. Vedral, in an interview Wednesday with the Journal Star, said he’s excited to see what Nebraska’s quarterback room does this year and into the future under quarterbacks coach Mario Verduzco.

“They’re going to be good,” Vedral said. “Adrian obviously is a really good quarterback and Luke is up-and-coming, there’s no doubt about that.”

Vedral laughed a little when he brought up Smothers, a 6-2 freshman, and said, "Uber-talented kid. I like him a lot.”

“Don’t forget about Matt and Brayden,” he added. “Those two kids are kind of the soul of that room and they hold us all together. They’re grinders, man. They do a lot and nobody really ever recognizes that they deserve some recognition for being part of that room. They’re just as much a part of it as the other three. They’ve got a special quarterback room.”

3. Everybody’s had unique circumstances during the shutdown, but McCaffrey has managed to stay active and work out with his brothers near his parents’ Colorado home.

When your brothers include arguably the best running back in the NFL and the presumptive starting quarterback at Michigan (oh, and another former NFL player), that doesn’t sound like such a bad setup.

"It's provided us with a good situation for the time, even though each one of us would love to be with our teammates,” Dylan McCaffrey told ESPN. "Never in a million years would we have come home for this long and have the opportunity to do this if the world wasn't, unfortunately, the way it is right now. I don't know if we have all sat down and focused on football like this, probably ever."

The whole thing is worth a read. And yes, it would be entertaining to see a footrace between Luke and Christian.

4. Frost discussed some of Nebraska’s recruiting setup on the radio earlier this week and mentioned that the Huskers are trending toward a smaller class this year.

“We’re in a position this year where we’re getting a lot done but we’re going to have to sign a smaller class this year, so we’re being a little bit deliberate about who we take and where and when,” Frost said.

For the first time in Frost’s tenure at Nebraska, the Huskers in 2021 recruiting are likely to be governed by the 85-man scholarship limit before they bump against the 25-per-class limit.

Roster management is never simple, but here’s a brief overview of why.

The starting point is that Nebraska only has 14 scholarship seniors. With Cerni’s addition, Nebraska is currently at 81 of 85 scholarships. Adding a transfer would get the Huskers to 82.

Not only that, but NU is expected to add Isaac Gifford to its scholarship ranks at some point, sophomore linebacker Luke Reimer could be close to one, and there are a couple of other players to keep an eye on a year from now, such as receiver Ty Hahn and offensive lineman Nouri Nouili.

It’s not exactly a crunch for space, but Frost and company have mostly filled out the roster. Even with normal attrition, it doesn’t seem likely at this point that the Huskers will have space for 25 signees in 2021.

There are some moving parts, but 16 or 17 seems like the minimum and the maximum is perhaps in the low 20s, depending on how the next year plays out.

Frost on the radio: 'There's a lot at stake' in Nebraska if football season is affected by pandemic

5. Frost and his staff have shown that they’re not the types to race to fill their class like some schools do.

This year is particularly filled with unknowns because of the way the recruiting calendar has already been thrown to the wind due to the coronavirus pandemic, but consider this: Even by a conservative estimate, NU may have a third of its class already together with its current seven verbal pledges.

Last year, the Huskers landed nine players in eight days leading up to the early signing date. That’s probably not going to happen again, but even so, the notion that Nebraska's class is off to a slow start seems kind of silly given those numbers.

6. Former Husker wide receiver Brandon Reilly took to Twitter to announce his plans to move on from football at the age of 26.

Reilly, who began his NU career as a walk-on, bounced around several NFL teams after going undrafted in 2017. He spent some time in December 2017 on the Buffalo Bills’ active roster but never cracked the stat book in an NFL game.

Reilly finished his Nebraska career with 1,275 yards and six touchdowns on 70 catches.

The most notable quotes from Scott Frost's radio appearance on Tuesday

#Huskers HC Scott Frost: "Kind of the same around the country. We don't have as much to do, so a lot of coaches are focused on recruiting. ... We're going to have to sign a smaller class this year, so we have to be kind of deliberate about where and when."

Frost says Mike Dawson was quarantined with his family in a house in New Jersey -- Dawson was with the New York Giants -- for six weeks without leaving the house. #Huskers

Scott Frost says models of 4-6 weeks to get ready for a season are "possible but not ideal." "I think we need to be talking about how to get student-athletes back to campuses without risking infection." #Huskers

Frost says there's more than football at stake, noting there are businesses that can't survive if football isn't played in Lincoln. #Huskers

Frost says he's really confident in his guys' ability to continue getting conditioning and weight done despite the shutdown. "I think we're handling that as well as anybody."

Time to hang up the cleats, but the game, and the people, are going to stick with me forever. pic.twitter.com/WOAdhyua7s