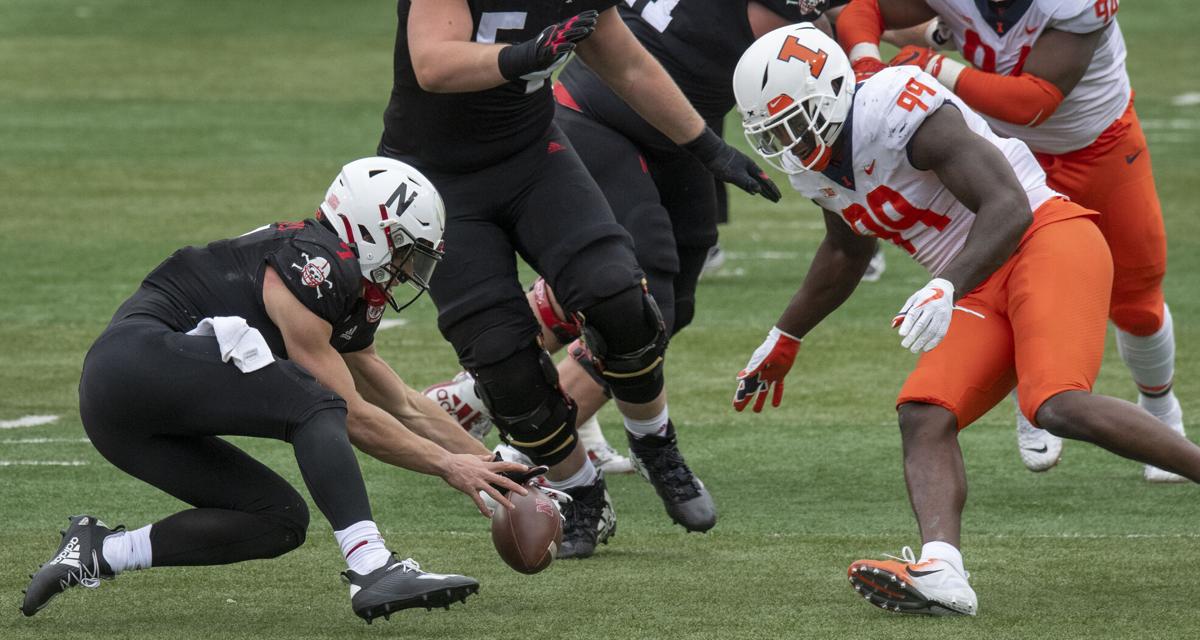 Nebraska quarterback Luke McCaffrey (7) chases after a bad snap along with Illinois' Owen Carney Jr. (99) in the second quarter Saturday at Memorial Stadium. 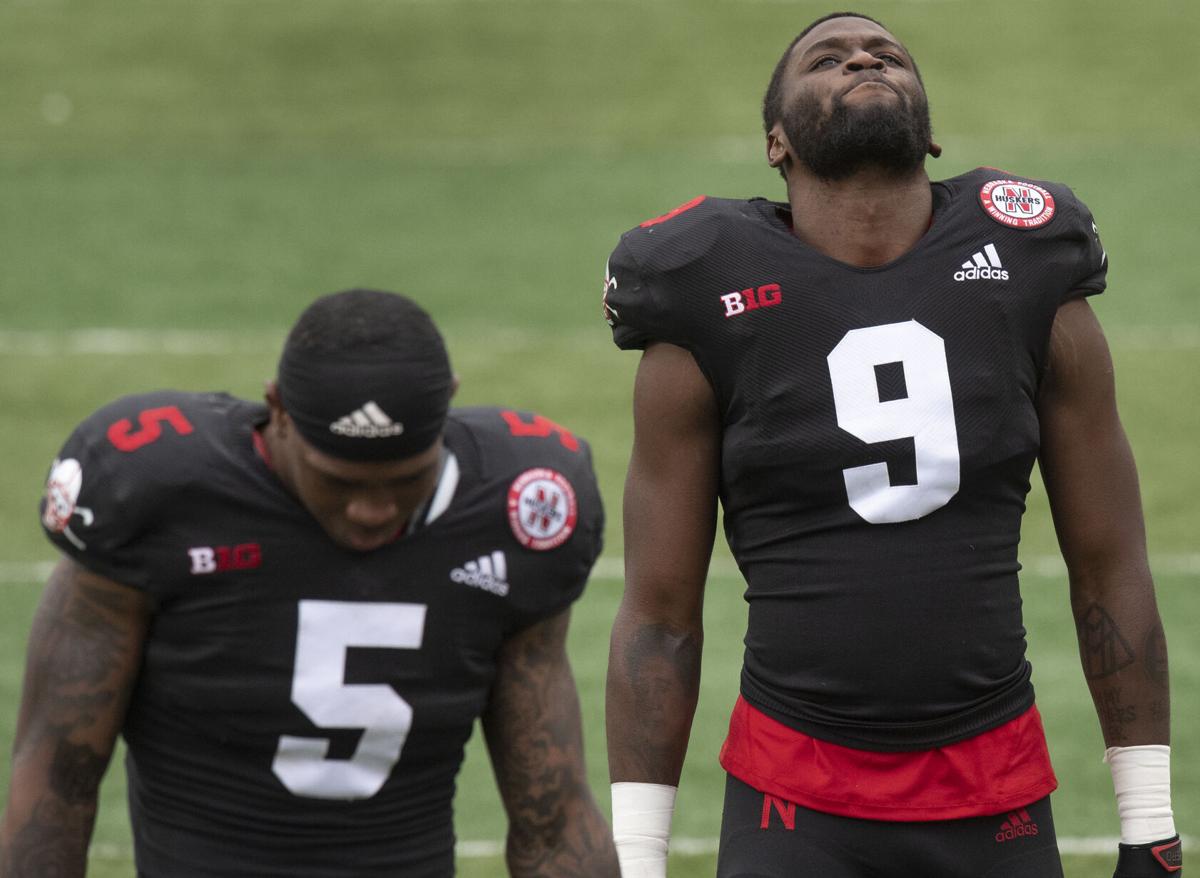 Nebraska safety Marquel Dismuke (9) and Cam Taylor-Britt (5) walk off the field after the Huskers' 41-23 loss to Illinois on Saturday at Memorial Stadium. 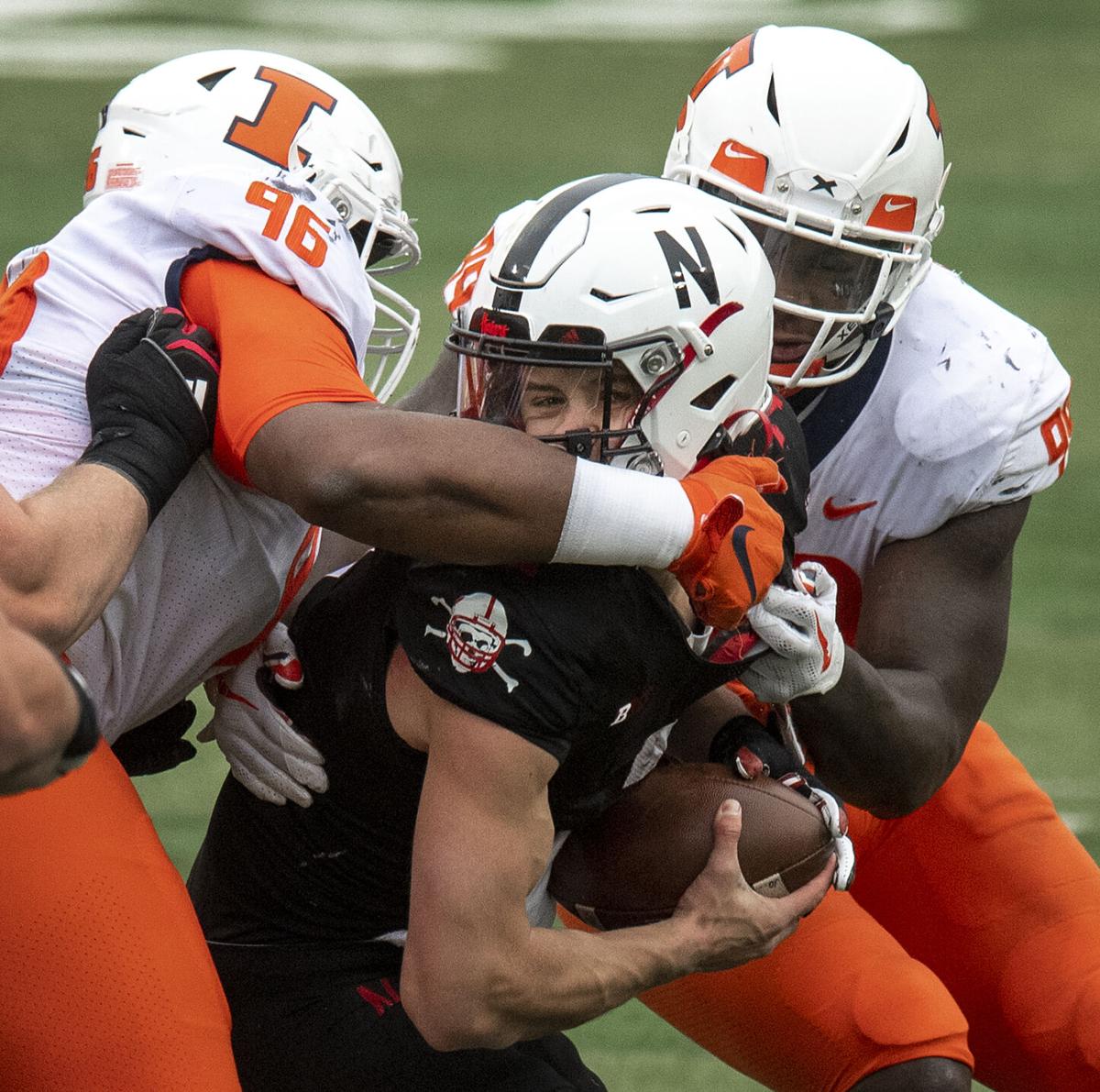 Nebraska quarterback Luke McCaffrey gets his helmet twisted around by Illinois' Roderick Perry (96) in the second half Saturday at Memorial Stadium.

In a half-season pockmarked by offensive inconsistency, the one thing Nebraska did each of the first three games is begin the game with possession and move the ball down the field quickly.

Entering Saturday’s game against Illinois at Memorial Stadium, one year after the Illini nearly beat the Huskers thanks in part to four forced turnovers, the message heard over and over and over again was that Nebraska must protect the football. Must.

Eighty-nine seconds into the game, Nebraska’s one offensive advantage was gone. It’s top-line key to the game fell squarely behind the eight ball. And it did not get better from there.

One week after its first victory of the season, Nebraska imploded instead of building on a foundation. The Huskers turned the ball over five times and failed to slow an Illini offense that entered the game averaging 17 points per game, resulting in an all-around putrid 41-23 loss to the Illini.

“We started the game off about the way we played the whole game,” coach Scott Frost said afterward. “I did not see this coming. We talked all this week about what we needed to do to win and that after a good win for our program last week, we needed to double down on everything we’ve been doing — energy, practice habits, enthusiasm.

“I was embarrassed by our level of execution in all three phases.”

There is no one direction in which to point the blame for this one.

Nebraska generated virtually no passing offense in the first half, gaining only 70 yards through the air on 7-of-18 passing by McCaffrey, along with two interceptions, three drops and several missed opportunities downfield.

NU got good rushing numbers from the quarterback position once again but did not establish any ability to push the line of scrimmage up front.

Defensively, Illinois’ scoring drives covered 21 yards — after the turnover on the first play — and then featured marches of 75, 65, 89, 65 and 75 yards before the fourth quarter even began.

“I didn’t think we had the juice that we had last week on defense,” Frost said. “We didn’t get as many hats to the ball on defense. We made mistakes over and over on offense.”

If those weren’t bad enough, when the defense did force a three-and-out to open the second half with the Huskers trailing 28-10 and looking for a spark, the return unit totally lost track of punter Blake Hayes, who recognized that nobody was paying attention and waltzed 14 yards for a first down despite looking entirely unsure of what to do with so much green grass in front of him.

Equally puzzling: What now is in front of Nebraska? A short week before a Black Friday trip to Iowa, but how does the program square such a promising outing against the Nittany Lions with such a deflating setback against the Illini?

This one spelled trouble from the start. Nebraska responded to the first-play turnover with a touchdown drive of its own, but then Illinois went right down the field, 75 yards in nine plays, and scored again. Then the Illini went 65 in seven plays on their next trip. Seven more points.

Nebraska’s offense, inconsistent at best and lifeless at worst over the opening three games, did not have close to the horsepower to keep pace. After a 71-yard, first-quarter scoring drive came an interception. Then a punt and a 10-play drive that ended in a field goal after a fourth-down touchdown run was wiped off the board by a holding penalty against center Cameron Jurgens. He was replaced at halftime by senior Matt Farniok. The rest of the first half featured a three-and-out and an interception.

For an idea of just how bad Nebraska was offensively in the first half, the first of McCaffrey’s two interceptions was actually a better outcome than the alternative. On fourth-and-4 from the UI 42-yard line, Jurgens’ snap sailed past McCaffrey high and to the right. He had to pick it up deep in the backfield, escape to his left and throw the ball down the field. Better a pick than a fumble, if you’re looking for the faintest of silver linings.

The scene: Black jerseys, and the lackluster play that seems to come with them, make a return

The second one came as NU was trying to push the ball down the field late in the half. A ball down the right sideline for Levi Falck hung up in the air.

All in all, Nebraska had five turnovers and didn’t force a single one, creating a monstrous gap in the category that was highlighted over and over again as one of the main ones that would determine the outcome between a Husker offense that’s been prone to giving the ball away and an Illini defense that’s been good at taking it.

“We’ll keep preaching that until the kids understand it.”

Illinois put 28 first-half points on the board behind 290 yards of offense, then opened up the second half with an apparent three-and-out. The fake punt, though, jump-started what turned into a 16-play drive that not only led to three more points but also took nearly five extra minutes off the clock.

That set the tone for the rest of the half. Nursing a multi-score lead, Illinois' first three second-half possessions looked like this:

Overall, Illinois outgained Nebraska 490 yards to 392, running the ball 52 times for 282 yards (5.5 per carry) and four touchdowns. It also got a strong performance from quarterback Brandon Peters (18-of-25 for 205 yards and a touchdown, plus 36 rushing yards and another score) in his first game back since missing 21 days due to the Big Ten’s COVID-19 protocol.

Both Mike Epstein and Chase Brown topped 100 yards rushing for Illinois, and the visitors converted 11 of 17 third-down tries.

Frost was adamant that he believes in this group, but that he and the coaching staff have to find a way to keep it from getting in its own way as the search for progress continues.

“I feel like we’ve come a long way, but it sure didn’t feel like it today,” Frost said. “We’re going to get this fixed, but the results need to come. The results are going to come, this is what I told the players, when their expectations and their effort are aligned. I didn’t think we had as much juice today. I didn’t think we had as much enthusiasm.

Nebraska's leadership group has made its bet clear: They believe they can do it themselves.

A midweek drive begins with Nebraska's footsteps on the 2022 recruiting trail, particularly at quarterback.

Spring countdown: A look at five Huskers with early-impact potential

Who comes to your mind when you think of the newbies this year? Is it a transfer? An exciting freshman, perhaps? We take a look.

The Knights have been on a long run of turning out talented players, several of whom have gone or are going to Nebraska.

Sources: Plans in works for Nebraska to open 2022 season in Dublin, perhaps vs. Northwestern

Husker A.D. Bill Moos says although plans for a 2022 trip to Dublin haven't been finalized, he's interested "if the opportunity presents itself."

Nebraska quarterback Luke McCaffrey (7) chases after a bad snap along with Illinois' Owen Carney Jr. (99) in the second quarter Saturday at Memorial Stadium.

Nebraska safety Marquel Dismuke (9) and Cam Taylor-Britt (5) walk off the field after the Huskers' 41-23 loss to Illinois on Saturday at Memorial Stadium.

Nebraska quarterback Luke McCaffrey gets his helmet twisted around by Illinois' Roderick Perry (96) in the second half Saturday at Memorial Stadium. 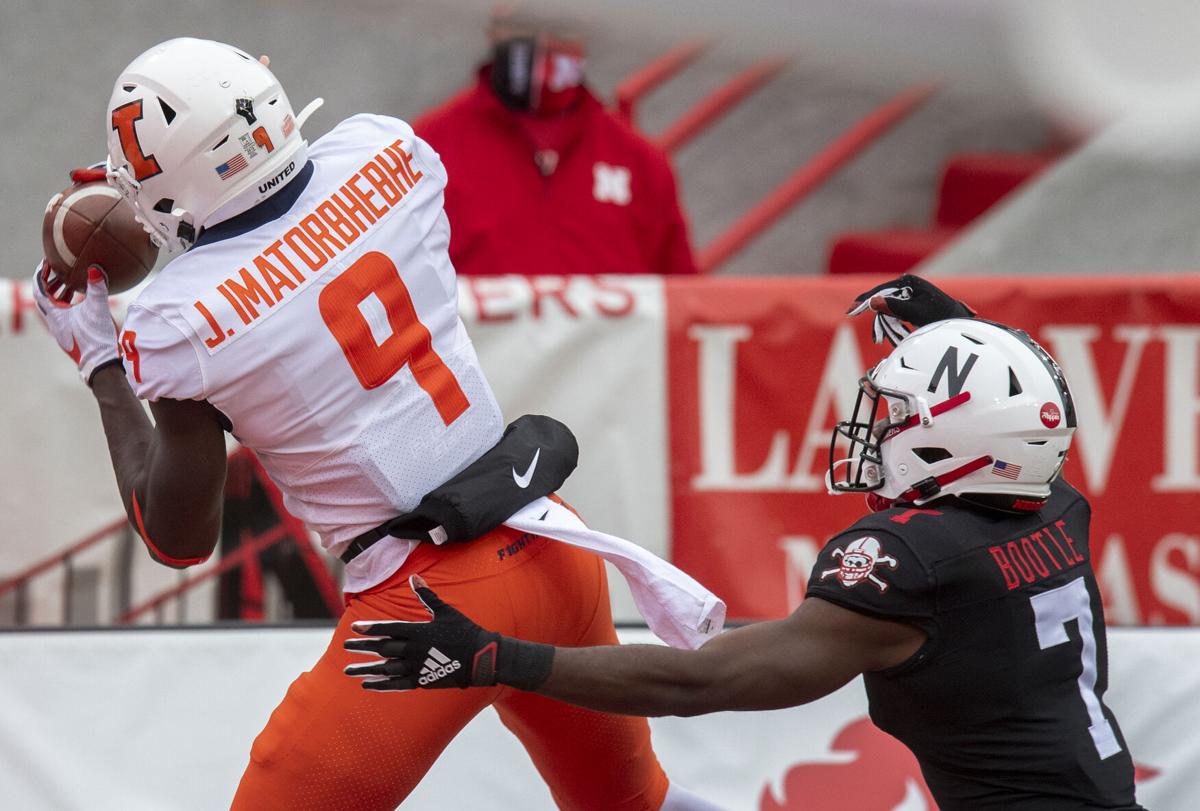 Illinois' Josh Imatorbhebhe (9) pulls in a touchdown pass in front of Nebraska's Dicaprio Bootle in the first half Saturday at Memorial Stadium.