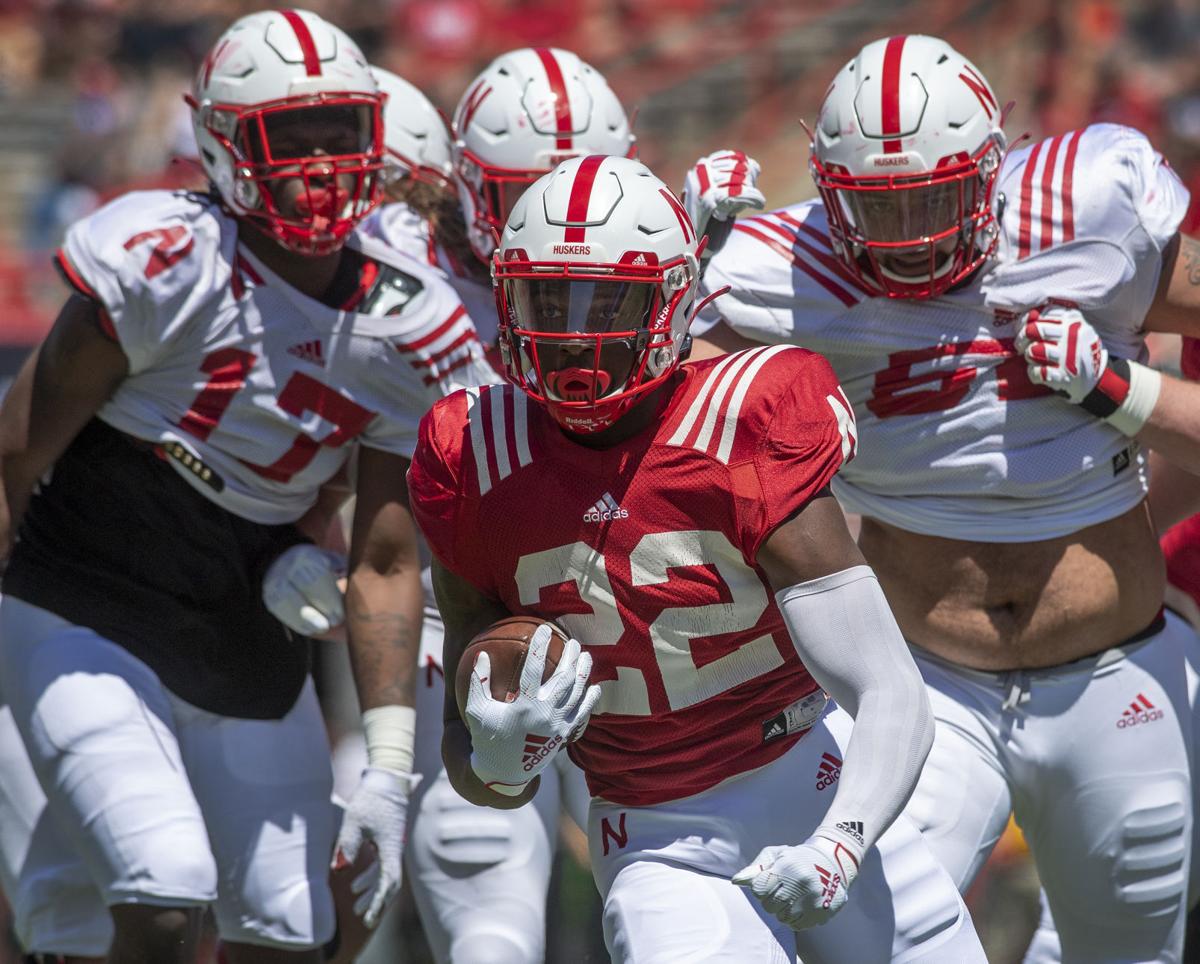 Red Team's Gabe Ervin (22) rushes in the second quarter during the Red-White Spring Game on Saturday at Memorial Stadium. 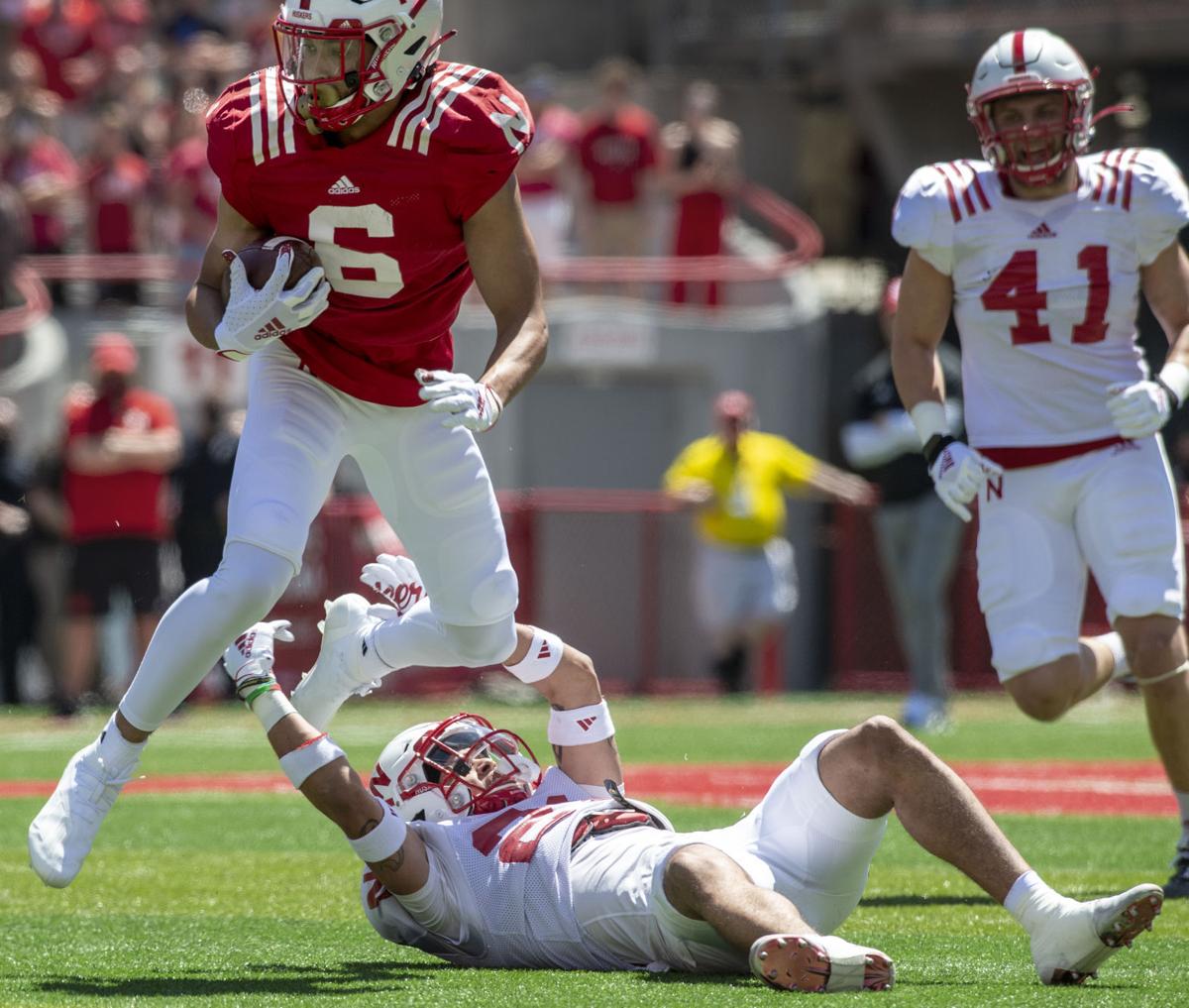 The Red Team's Samori Toure (6) jumps over the White Team's Noa Pola-Gates (bottom) in the first quarter during the Red-White Spring Game on Saturday at Memorial Stadium.

Three players who stood out

1. Oliver Martin: He finished with five catches for 47 yards and capped spring the way it went the whole time for him: smooth and productive. The former Iowa transfer has settled in nicely and on Saturday was part of a top trio that also included Samori Toure and Omar Manning.

2. Sevion Morrison: A bunch of running backs had nice days, but a nod to Morrison’s outing since it’s the first time he’s played in front of fans at any time. Even walk-on Jaquez Yant had a first impression in an open practice a couple of weeks ago. Morrison had eight carries for 38 yards — five players actually accumulated more on the ground — but the first look was a positive one for the freshman from Oklahoma.

3. Samori Toure: Toure operating out of the slot is a good-looking picture for the Huskers. He had three catches for 47 yards in the early going and did a lot of work in the middle of the field. He’s going to be a major factor in this offense.

The Scene: It was football Saturday in Lincoln again, and oh, what a joy it was for fans

1. AM2 dart. Junior quarterback Adrian Martinez throwing a dart over the middle to Toure for 27 yards on the first pass attempt of the day.

2. Walk-on impression. Yant bulling his way to a 21-yard touchdown on the first series of the third quarter when tackling went live.

3. Vokolek crunch. Junior tight end Travis Vokolek plowing over a linebacker in the hole to spring a running back for a solid gain.

Two things we learned or saw

1. Manning, a 6-foot-4 junior, had another impressive day. He had three catches for 24 yards but had at least one chunk play called back because of a penalty. He also dropped a deep ball in the first quarter after cleanly running by cornerback Phalen Sanford.

2. Nebraska’s offensive line looks like a six-man competition for the starting jobs. Matt Sichterman and Brant Banks are competing for the right guard spot, but Banks also ably played right tackle in the first half. He might end up as a valuable, multi-position swing man.

One question to ponder before fall camp

Who is going to win the running back job? Coming out of spring, there’s no clear frontrunner, but freshman Gabe Ervin never strays far from the conversation. The young back from Buford, Georgia, showed well on Saturday and was available most of the spring. Those don’t guarantee a starting job, but they represent a nice start.

1. Junior tight end Austin Allen: “I think we executed pretty well. Not a lot of mistakes, a couple mistakes here and there. It’s hard to get a real good feel how your offense is clicking when you’re just two-hand touch, essentially. But we were still getting 10-yard chunks every time. So the holes were open, guys were hitting it pretty hard, so I think it was a good day for the offense as a whole.”

2. Freshman left tackle Turner Corcoran on his chemistry with left guard Ethan Piper: “We were talking about it on the sideline, but he was saying how we were passing off the (defensive line) games really well. … He said, ‘We’re passing them off really well,’ and I said, ‘Yeah, we’re doing a great job, let’s keep at it.’ The whole offensive line played well.”

3. Frost on freshman QB Heinrich Haarberg: “This isn’t like a freshman camp back in the day where we install 20% of the offense and the fundamentals. We just threw the guys in and said learn the whole thing. We were really vanilla today, so it was simple stuff, but Haarberg has a huge arm and he’s a really good athlete and he’s a big kid and he’s smart, so it’s just a matter of catching him up with X's and O's and knowing what to do and being efficient.”

Some of the questions Nebraska entered spring ball with still exist. Who is the No. 2 quarterback? What will the running back room look like in August? Frost reiterated Saturday he didn’t think NU would explore the transfer market for another quarterback.

Some questions have been at least partially answered. The receiver room, for example, had a good spring.

Saturday featured some flash-bulb moments on what could be, but for the most part, fans, media and likely coaches are going to reserve too much judgment on progress until the fall considering this is a group that has backtracked in offensive production each of the past two years.

Photos: All of the sights from the return of the Red-White Spring Game at Memorial Stadium

Nebraska signed four receivers in its 2019 scholarship recruiting class. None of them remain on the team.

A year after transferring from CSU, Husker OL Nouili has the look of 'a real dude'

He may be seeing "orange" lights, but Husker offensive lineman and German citizen Nouredin Nouili has been good to go this spring.

Pondering the portal: What positions might Nebraska add to with its final two scholarship spots?

Here are a few possibilities, which surprisingly skew toward the Huskers’ veteran defense.

Houston, who never appeared in a game for Nebraska, is the third of four wide receivers signed in the 2019 class to depart.

While Nebraska's recent draft history isn't as rich as it once was, the Huskers continue to have success landing offensive linemen in the NFL.

Marvin Scott and Gabe Ervin talk about the spring and the wide-open race in the Husker RB room.

Weekend WR transfers close book on rough recruiting stretch even as confidence grows for 2021, beyond

Just how empty did Nebraska come up in receiver recruiting in 2018 and 2019? Take a look and see why Huskers are on rebuild No. 2 under Frost.

'It all just clicked': Freshman LT Corcoran felt some bumps this spring, but also found his groove

Turner Corcoran echoes his position coach when he says he was "a little shaky" at first. Here's the story of how the process is shaping up.

Frost on the radio: Huskers feel good about where young QBs will be in development come August

Scott Frost (again) says the team is "comfortable" behind Adrian Martinez at QB. Heinrich Haarberg might have something to do with that.

Steven M. Sipple: The football was good, and seeing all the fans made for a colossal "W"

The cold and desolate nature of the 2020 season gave way to warmth and good feeling for the 2021 Spring Game, and NU gave fans a decent show.

Red Team's Gabe Ervin (22) rushes in the second quarter during the Red-White Spring Game on Saturday at Memorial Stadium.

The Red Team's Samori Toure (6) jumps over the White Team's Noa Pola-Gates (bottom) in the first quarter during the Red-White Spring Game on Saturday at Memorial Stadium.