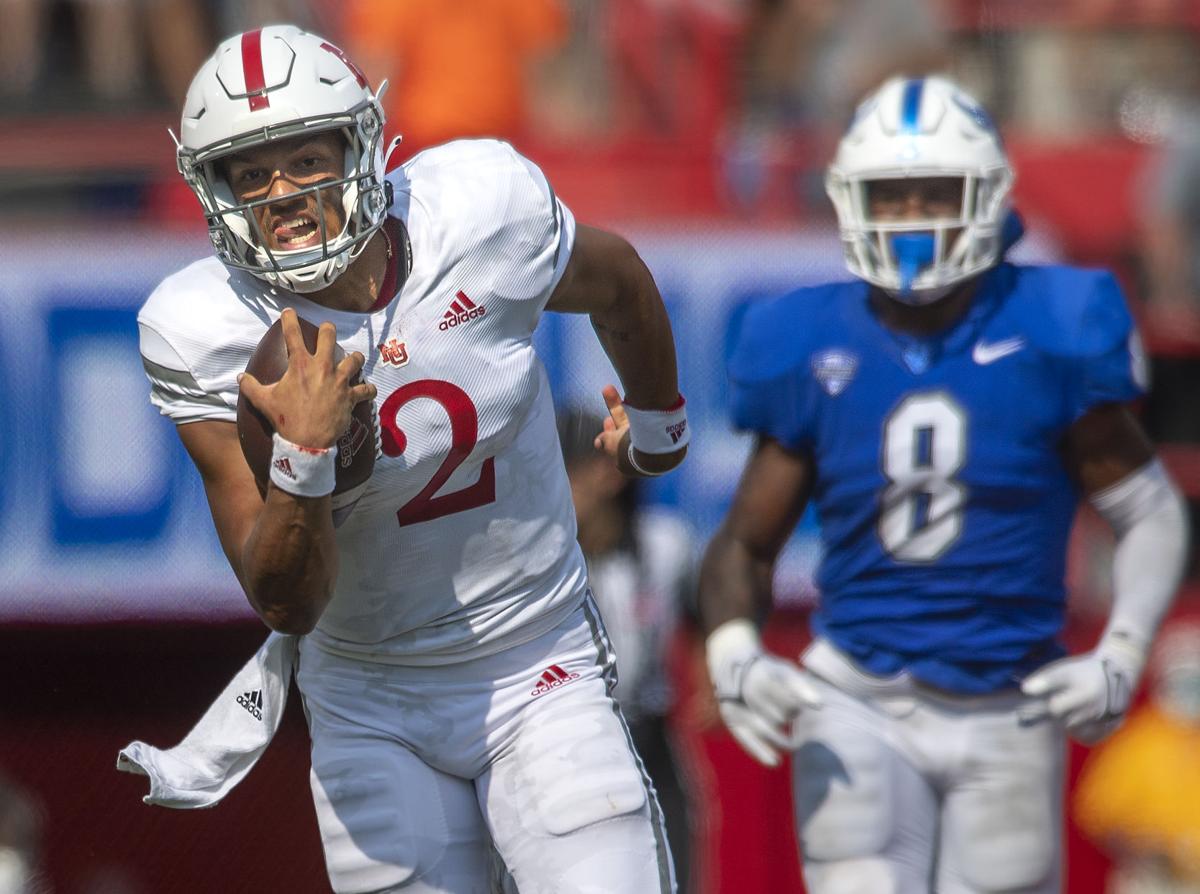 Nebraska quarterback Adrian Martinez (2) embarks on a 71-yard run in the second quarter next to Buffalo linebacker Kadofi Wright on Saturday at Memorial Stadium. 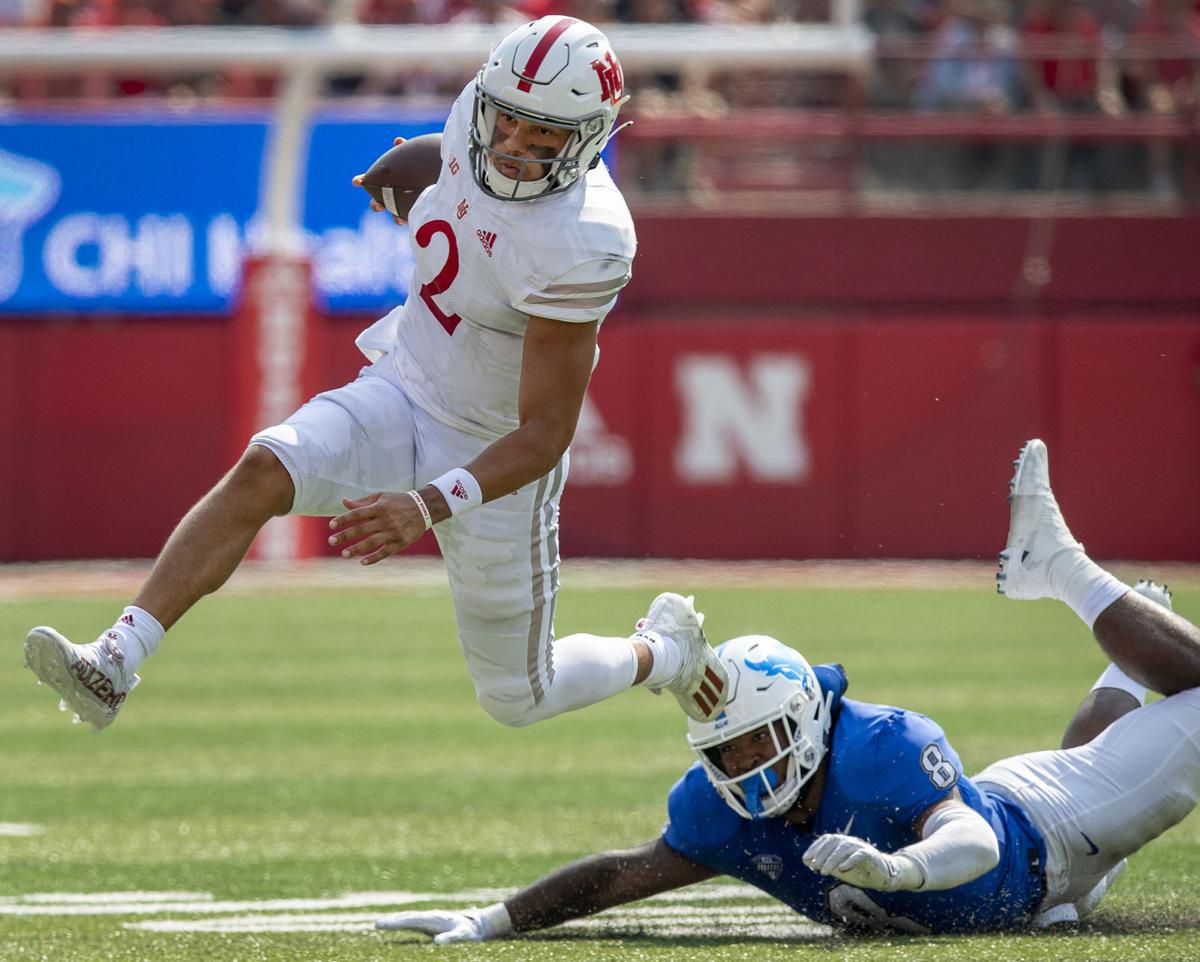 Nebraska quarterback Adrian Martinez (2) rushes past Buffalo's James Patterson (8) in the first half on Saturday, Sept. 11, 2021, at Memorial Stadium.

Nebraska junior quarterback Adrian Martinez has hit on an increased rate of big passing plays — two 68-yard touchdowns to Samori Toure against Buffalo highlight the progress in that department — through his first three games this fall.

He’s also been NU’s most dangerous threat in the running game.

“A testament to Adrian is he is making a lot of big plays,” offensive coordinator Matt Lubick said Tuesday. “Some of it is dictated by, it wasn’t actually a called play for him to run, but because of what happened, whether it’s a read or the coverage telling him he has to run it, he’s made a fast decision and done it.”

Indeed, Martinez leads Nebraska with 256 rushing yards (7.5 per carry) and three rushing touchdowns, which are dynamic numbers in their own right. They don’t tell the entire story, though.

By the Journal Star’s count, the 6-foot-2, 212-pound junior has racked up 246 yards on 14 designed pass plays that turned into scrambles, including a 75-yard touchdown against Illinois and a 71-yard, field-tilting rumble against Buffalo. He’s been sacked six times, but outside of those plays, he’s netted 293 yards on 28 carries (10.5 per).

Against Buffalo, Martinez had four carries for 22 yards on designed run plays and five scrambles for 90, according to Journal Star numbers.

“I think we only had four or five in the game called quarterback runs where he was the primary guy,” Lubick confirmed Tuesday. “But, in our offense, the nature of our offense, whether it’s a pass play and no one’s open or the coverage dictates that you run — or if it’s a run play and the read tells you to run — sometimes that happens.

“He’s a good player that can make guys miss in space and do a lot of good things with the football.”

“It’s special. He’s doing some special things out there,” running back Markese Stepp said. “Any time you have a running quarterback that can also throw, it’s hard to defend. Especially when somebody is running man coverage, for him that’s like a prayer come true. You get like 15 yards of free room and make something happen, and Adrian’s doing a really good job.

“He’s helped us a lot, being able to make those long runs has definitely flipped field position and flipped some of the games that we’ve been in.”

Martinez is making that kind of hay on the ground despite a carry share of 23%, which is far lower than his career average at Nebraska. He’s accounted for at least 26.5% of Nebraska’s rushing attempts each of the past three seasons.

That number figures to trend higher this fall unless NU can get its running backs going against Oklahoma and into the teeth of the Big Ten slate.

Martinez has also diced up the past two opponents through the air, completing a combined 30-of-42 for 496 yards against Fordham and Buffalo after a bit of a rocky start against Illinois. He’s thrown four touchdowns and has yet to log an interception through three games.

“Quarterbacks like having answers,” Lubick said. “They want to know where they can go with the ball fast. He’s been doing a really good job of that. As a matter of fact, a lot of the big plays in this last game were his second and third progression, where he went to his first progression, made a fast decision and got to his second progression.

“The big play to Samori was that way; the one (offensive pass-interference) penalty, that was the same thing. He’s done a really good job of understanding his progressions and getting through them fast.”

Through three games, Martinez has just one turnover — a costly scoop-and-score fumble against Illinois right before halftime — ranks 10th in the Big Ten in rushing at 85.3 yards per game and 14th nationally in total offense per game (320.5).

“It just matters what he's going to do well this Saturday."

Photos: Take in all of the sights from Memorial Stadium, where Nebraska hosts Buffalo

Why are the Cowboys favored to win the divison?

Who's more likely to make the CFB Playoffs: Clemson or Ohio State?

Who's more likely to make the CFB Playoffs: Clemson or Ohio State?

Nebraska will play under the lights for the first time this season when it travels to East Lansing.

Red Report: What impresses Lincoln Riley about the Huskers; CBs to be tested; Prochazka sees TDs

Widely considered one of the best offensive minds in college football, Lincoln Riley said NU's secondary does "everything pretty well."

Red Report: Frost's two-letter response to injury question; the Grinch; how Toure stepped in on punts

Out by the end of Saturday's game: Allen, Manning, Vokolek, Martin, Betts. "Those are some of our most talented skill guys and we need them back."

Without many of his best options, 'big-time player' Adrian Martinez rises to lead Nebraska past Buffalo, 28-3

On this day, the Huskers got more than enough from the junior quarterback and a stingy defensive effort to improve to 2-1 this season.

He won't be there in person, but Osborne's fingerprints are all over Saturday's rekindling of NU/OU rivalry

"It does have meaning and purpose, and brings back a lot of memories," former Husker coach Tom Osborne says of the renewal of the Nebraska-Oklahoma football rivalry.

Watching from home? Follow along with us for live reaction, commentary, analysis, videos, photos and more from Memorial Stadium.

Steven M. Sipple: Nebraska does enough to build a measure of intrigue for Oklahoma week

The first words out of Scott Frost's mouth after Saturday's win? "I'm ready for next week," he said. How's that for intrigue?

How does Nebraska get its run game going? And just how much has freshman OL Prochazka put himself in the mix?

Scott Frost described in detail why the run game is a "group effort." Some nuts-and-bolts talk there. As for Prochazka, he's "in the conversation."

Ryan Held has given each of his top three running backs a chance early in a game, then deciding how to distribute carries from there.

Nebraska quarterback Adrian Martinez (2) embarks on a 71-yard run in the second quarter next to Buffalo linebacker Kadofi Wright on Saturday at Memorial Stadium.

Nebraska quarterback Adrian Martinez (2) rushes past Buffalo's James Patterson (8) in the first half on Saturday, Sept. 11, 2021, at Memorial Stadium.