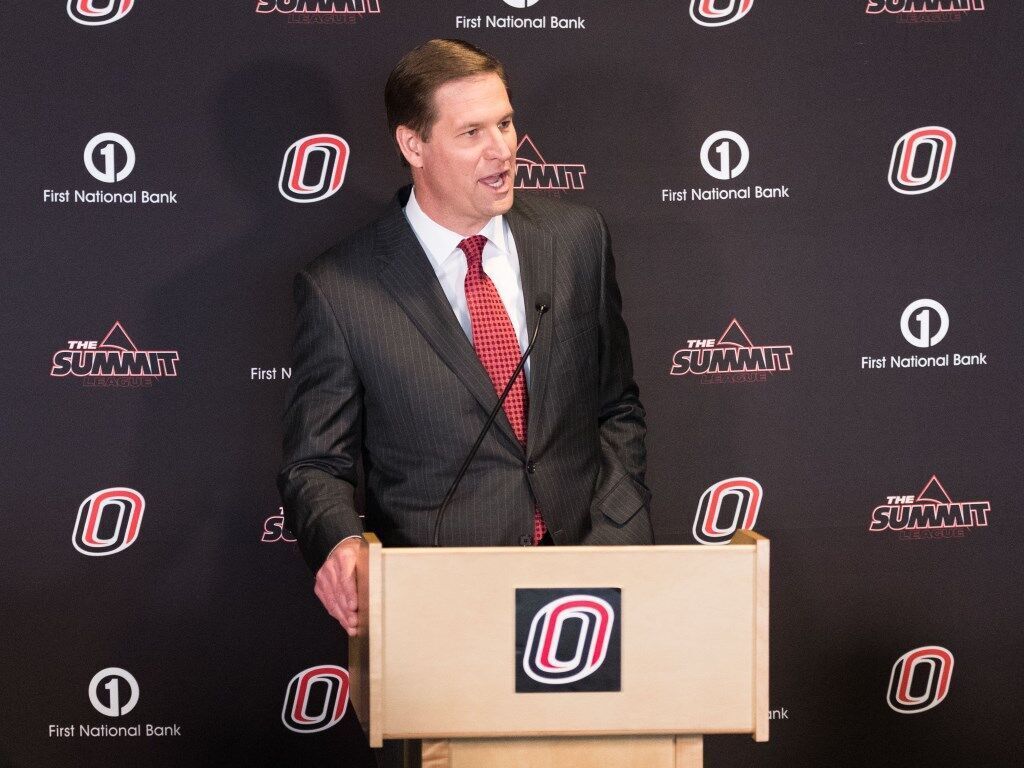 Trev Alberts, a former Husker football player, has been the athletic director at UNO since 2009. 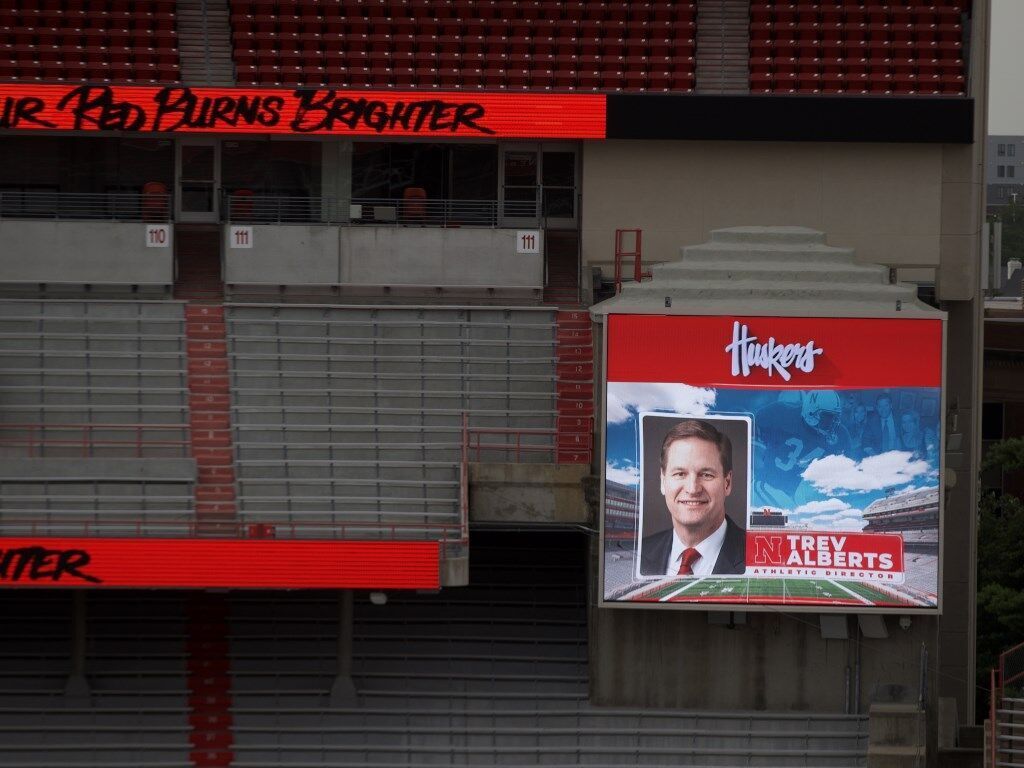 A video board in Memorial Stadium shows Trev Alberts as the Huskers' new athletic director ahead of his introductory press conference. 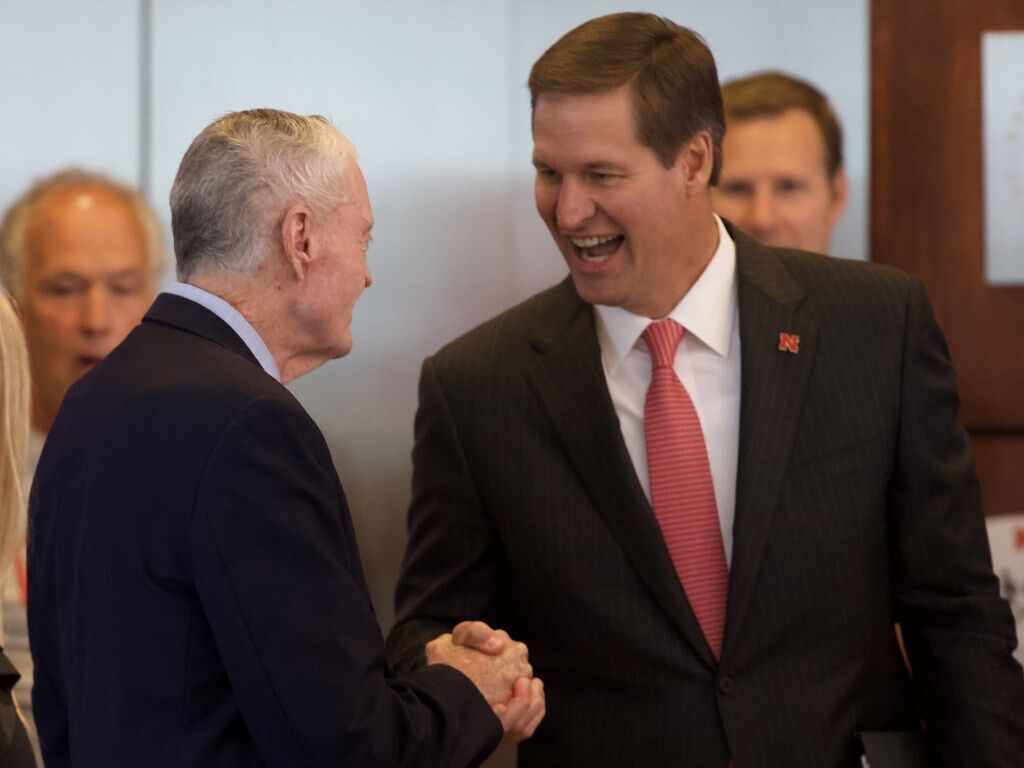 LINCOLN — One of the most decorated players in Husker football history is leaving UNO to run Nebraska’s athletic department.

Trev Alberts, NU’s only Butkus Award winner, who played in the 1994 Orange Bowl with a cast on his arm, takes over at Nebraska after a 12-year administrative tenure at UNO. He replaces Bill Moos — who retired with 18 months left on his five-year contract — and assumes the role at a moment when the football program he once played for has posted four straight losing seasons.

UNO didn’t have a football program for the last 10 years of Alberts’ tenure after he cut that program — along with wrestling — as part of a decision to take UNO athletics to Division I. Alberts stayed at UNO 10 more years after those calls, and was passed over for the NU A.D. job in 2012 when Shawn Eichorst succeeded Tom Osborne, and 2017 when Moos was hired.

Now the Nebraska job belongs to Alberts. NU will hold a press conference at 11 a.m. Wednesday at Memorial Stadium, and Alberts was meeting with Husker coaches Wednesday morning.

“It is such a tremendous honor to have this opportunity to lead Husker athletics,” Alberts said in a statement. “UNL has incredibly talented coaches and student-athletes, and a fan base like no other program in the country. The future of Big Red is bright. I can’t wait to join the Husker athletics team and get going.”

“He knows how to help build competitive, winning programs and is committed to long-term success,” Green said in a statement. “He knows how to navigate the complex financial aspects of a media-driven business. He remains a student-athlete at heart and prioritizes student success, on and off the playing field. I am so pleased to welcome this Husker back home to Husker Nation.”

“And he knows firsthand the discipline and hard work necessary to compete with the best,” Carter said in a statement. "I’m thrilled that we have found someone in the Nebraska family to lead our student-athletes, coaches and staff forward.”

Alberts’ hiring comes one week before Big Ten media days — where athletic directors tend to meet — so his first high-profile public duty will likely be that. His football coach, Scott Frost, will be there as well.

In 1993, Alberts posted one of the best defensive seasons in school history when he had 96 tackles, 21 for loss and 15 sacks as a rush end. He was named a first-team All-American, the Butkus Award winner and an Academic All-American. He saved his best NU performance for last, when he posted three sacks with a dislocated elbow in an 18-16 loss to Florida State in the Orange Bowl.

A first-round NFL draft pick, Alberts’ pro career was derailed by injuries. After his short NFL career, Alberts was a college football analyst for several TV networks before becoming the A.D. at UNO.

Now, at 50 years old, Alberts returns to his alma mater.

» Get the full story later today on Omaha.com or in tomorrow's edition of The World-Herald

'Where I Come From': A 2017 interview with now-Husker A.D. Trev Alberts

Photos: Trev Alberts through the years

Nebraska has a new athletic director — and it's a familiar face. On a new episode of the "Carriker Chronicles," Adam gives his reaction to Tre…

Trev Alberts, a former Husker football player, has been the athletic director at UNO since 2009.

A video board in Memorial Stadium shows Trev Alberts as the Huskers' new athletic director ahead of his introductory press conference.