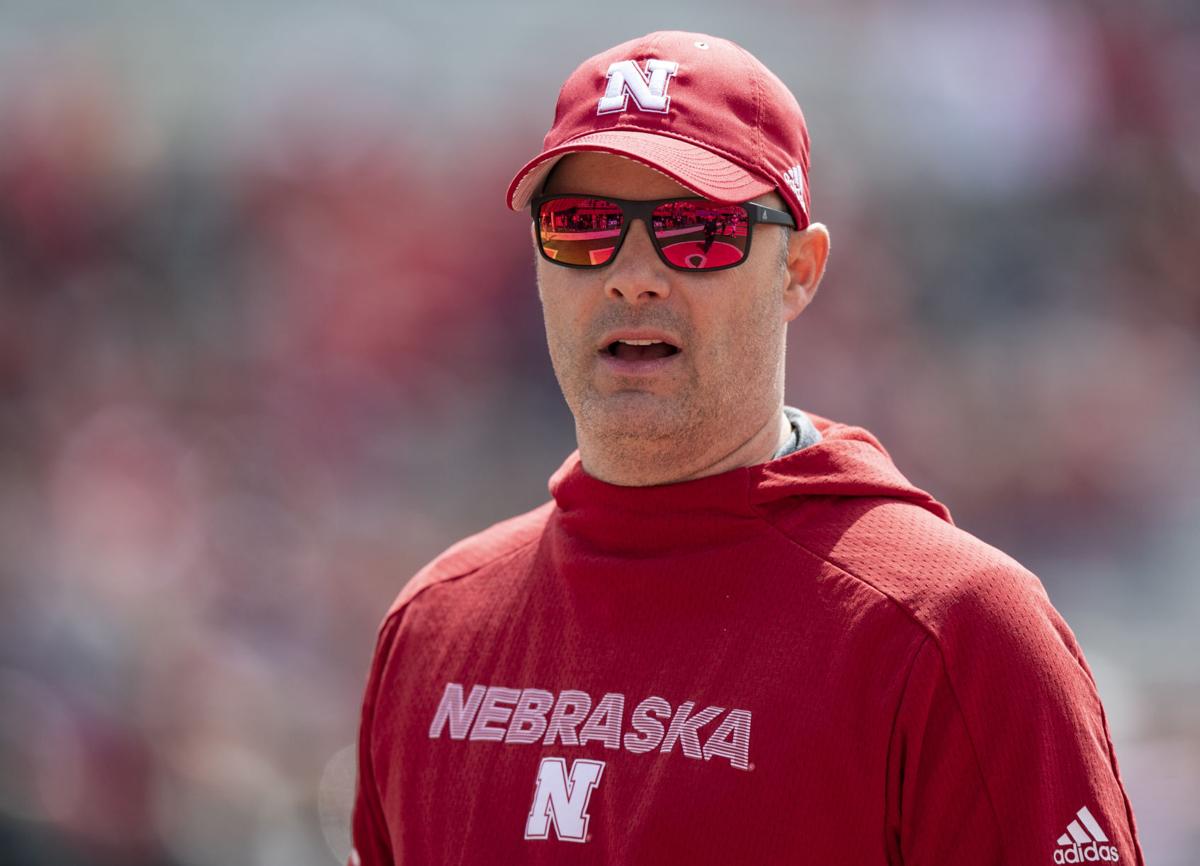 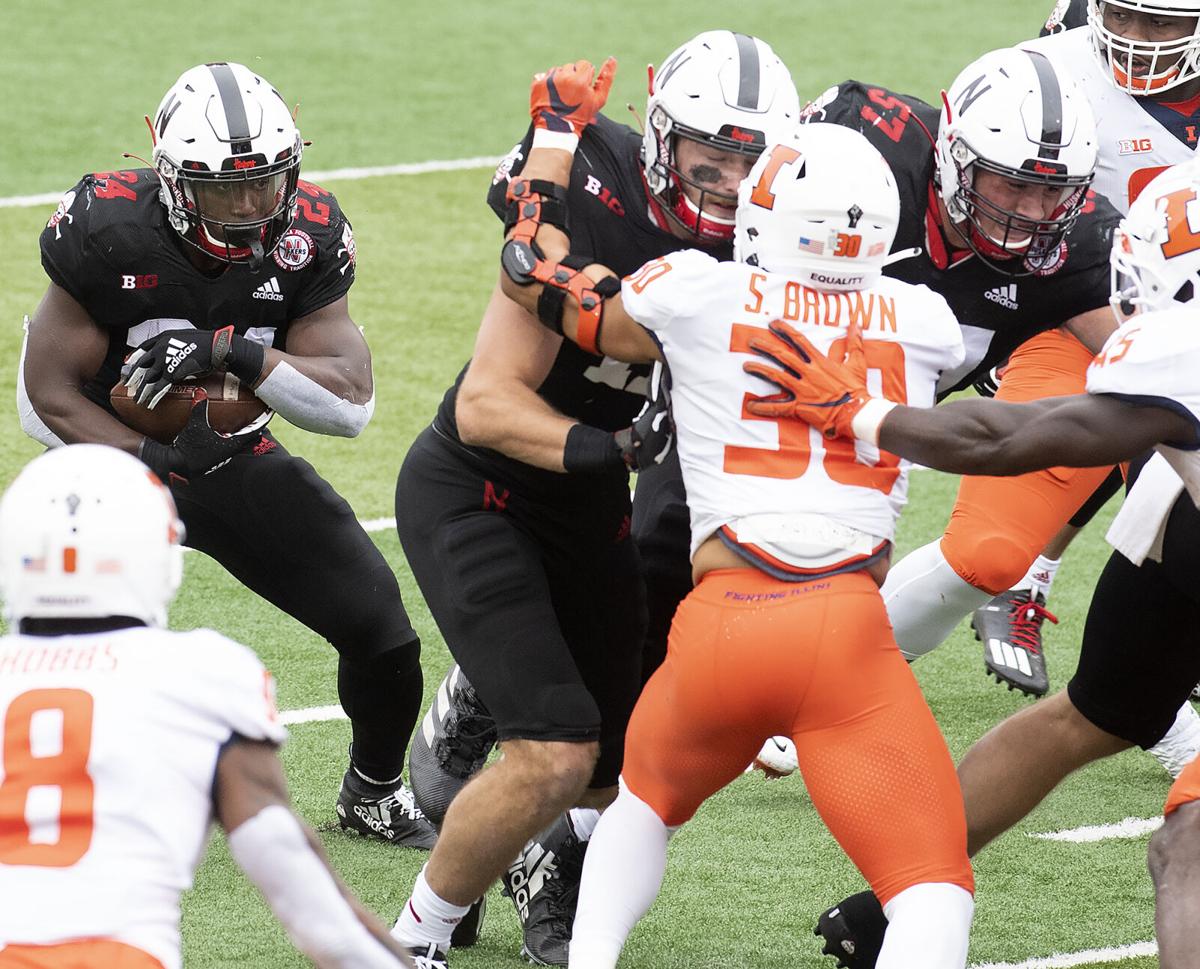 Nebraska's Marvin Scott (24) looks for a hole in the Illinois defensive line during the second quarter Nov. 21, 2020, at Memorial Stadium. 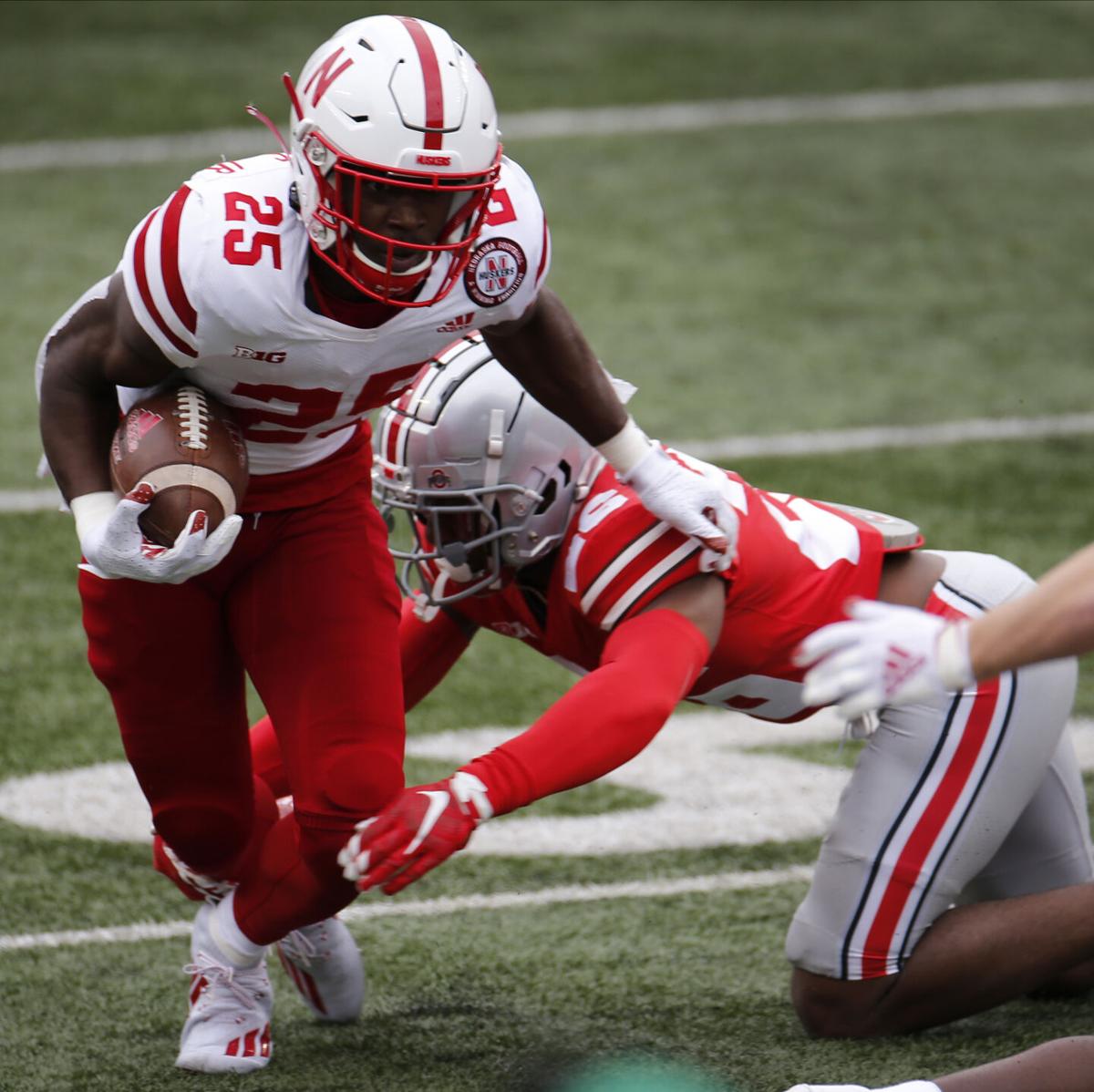 “We’ve got to be able to be a downhill, physical team,” Ryan Held said earlier this week. “That’s something that’s a point of emphasis. It starts up front. It starts at the receiver position. It starts at the tight end position, then it’s my guys hitting it downhill.”

From limiting turnovers to self-motivation, Adrian Martinez is focused on an offseason of growth

“This is a league where 4 yards is a good play,” he added, referring to the Big Ten.

It’s no secret Nebraska leaned hard on its quarterbacks in the running game last season — too hard, actually. So, it's also no secret that Husker head coach Scott Frost wants more production from the running back position. Dedrick Mills and Wan’Dale Robinson were decent and at times excellent last season, combining to rush 130 times for 636 yards (4.9 ypc) and four touchdowns. Trouble is, they’ve both departed from the program.

“We have to get more production out of that position,” Held said. “We have to. We have to be able to run the ball and be consistent in seeing our cuts and being able to really be an asset to our offense.”

The coach spoke Monday following the fourth practice of the spring season, and second in pads.

“Details. Fundamentals. We have to get more running backs on special teams, which will help the overall cause,” he said.

“We have to be tougher. We have to take care of the ball and really put ourselves in position where we can be a position of strength.”

Ah, yes, bingo. You once could bank on running back being a position of strength at Nebraska. Frost needs that to happen again, and I don't mean in 2022 or 2023.

No matter what he’s doing to bolster his offense this spring, he’ll always have room for high-caliber running backs capable of punishing teams in the midsection. Ever hear of Royce Freeman, the former Oregon back?

Devine Ozigbo was wonderful in 2018, rushing for 1,082 yards on 7.0 yards per carry in Frost’s first season in charge. But we’re talking about a position of strength in the manner of Ameer Abdullah (2011-14).

Of course, you could go on and on. Mike Rozier, Ahman Green, Lawrence Phillips, Calvin Jones, Ken Clark, I.M. Hipp. Just on and on.

Nebraska fans would love to see running back become a no-doubt position of strength. Held would love that, too. He played for Nebraska in the 1990s. He knows what we're talking about here.

This is Year 4 for Frost's staff. You have to give the staff room (and time) to operate. Held has a mostly young batch of running backs. But that isn't stopping him from operating with urgency. Wise plan.

But there's balance in the conversation. You have to be fair.

He notes Scott and fellow 2020 true freshman Sevion Morrison didn’t have a spring practice last season because of COVID-19. USC transfer Markese Stepp (sophomore) and 2021 true freshman Gabe Ervin arrived over the winter. Rahmir Johnson and Ronald Thompkins are "veterans" as third-year redshirt freshmen thanks to the COVID freeze on eligibility.

Held likes his depth. But he's low on experience in his group.

It sounds like Ervin could be a young runner to watch closely, especially if Stepp continues to battle injuries like he did at USC. The 6-foot-1, 195-pound Ervin has good feet and good vision, Held said.

“He’s really smooth in what he does,” the coach said. “He’s slippery. He catches the ball well. And it means something to him. He wants to be really, really good. He’s mad when he doesn’t execute a play right. That’s what I want. I want it to bother the heck out of guys if they don’t do it right.”

You don’t want to rush too hard into the Ervin-emerging conversation. He's a kid playing against grown men. He's learning.

“It takes time to be able to learn what’s happening pre-snap, what’s happening post-snap, where the ball might hit, where our pass protections are, the timing of screens," Held said. "You’ve got to be able to do a lot as a running back here. It just takes time. You can’t speed up time. It’s good that guys are getting plenty of reps. We’ll continue to watch the film. They need to watch the film on their own because I can’t get through every single play due to the (NCAA's) hour rules.

“What does it mean to you? Are you going to take more time to be a student of the game? Those are the guys who have the best chance of putting themselves in position to be successful.”

The 6-foot, 200-pound Morrison also seems like someone to watch. He was “rolling” last season in practices before getting COVID-19 and being sidelined for three full weeks of a shortened season, Held said. He tried to return to action with a week left in the schedule, but that, obviously, was difficult.

“We ended up getting fairly thin just due to various ills,” Held said. “But we have everybody out there now.”

Nebraska is stressing getting more production on first and second downs.

You saw a position of strength in the final game of 2020, against Rutgers in the cold of Piscataway, New Jersey. Mills ran wild, gaining 191 yards on 25 carries, by far his best game of an injury-plagued season.

“That’s kind of how we want this deal to go,” Held said of Mills' show of strength.

A lot of Nebraska fans nod in agreement, some with more patience than others.

A look at the 2021 Nebraska football schedule

Last time the Huskers and Bulls met: No previous matchups

The last time the Huskers and Lions met: No previous matchups

There was plenty for Husker fans to like about Saturday's practice. But fan anxiety should be expected right now.

NU's young backup QBs need time to develop. So, some advice in that regard courtesy of the great John Wooden: Be quick, but don't hurry.

It's mailbag time. A great time of the week. We address a football matter that won't go away and some disappointing NCAA volleyball talk.

Steven M. Sipple: If NU is looking for leaders, it may do well to start with its fatherly safeties

Safeties Deontai Williams and Marquel Dismuke surely are among the strongest leaders on Nebraska’s roster. Listen to them. They just have to be.

Nebraska's Marvin Scott (24) looks for a hole in the Illinois defensive line during the second quarter Nov. 21, 2020, at Memorial Stadium.