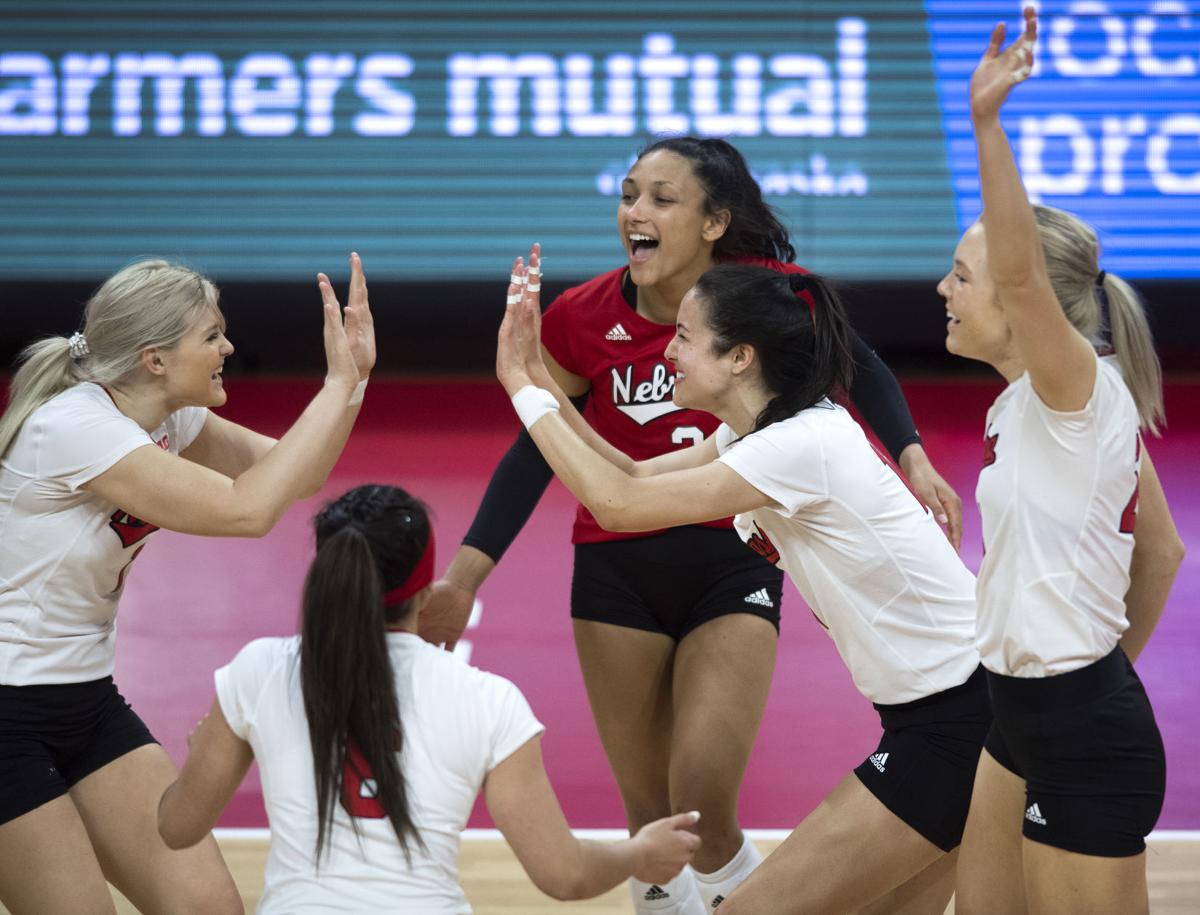 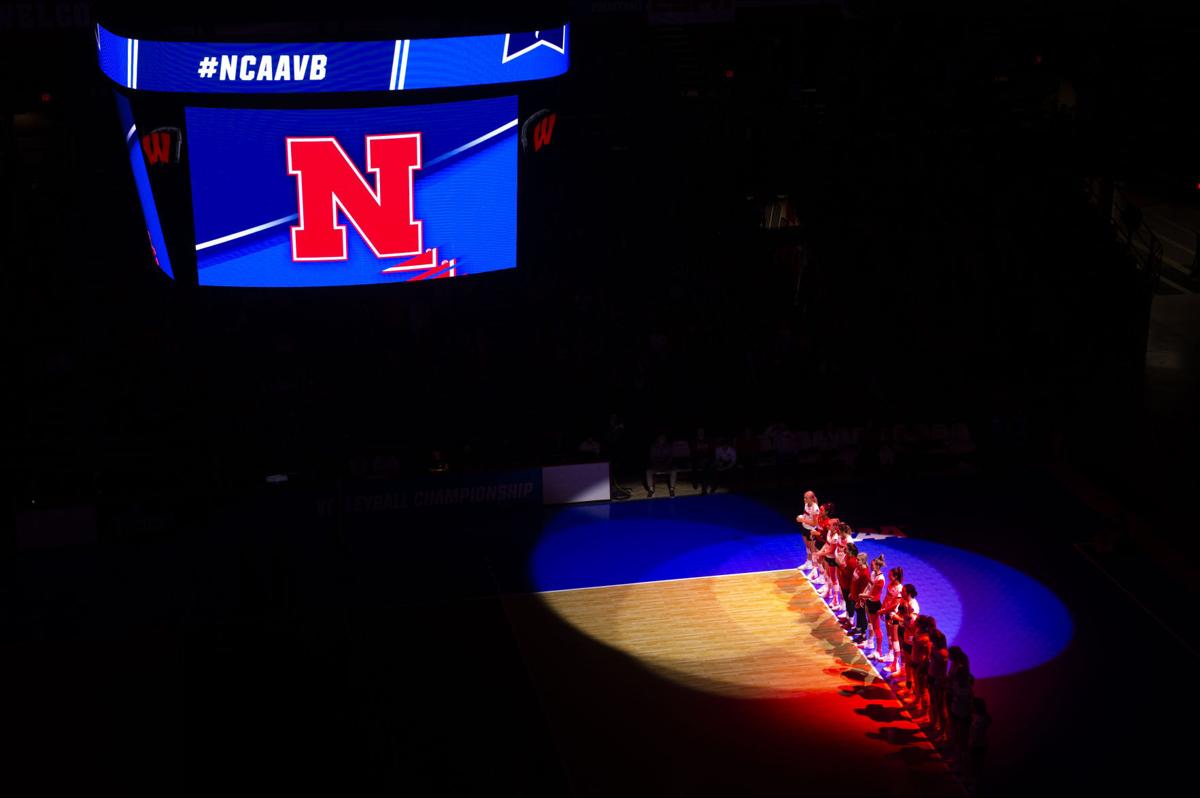 The Nebraska volleyball team is introduced before a NCAA regional semifinal match against Hawaii on Dec. 13, 2019, at UW Field House. For the first time in nearly 16 months, the Huskers will be playing postseason volleyball.

There wasn’t a lot of excitement or suspense from the Nebraska volleyball team for this season's NCAA Tournament selection show.

Most years, getting one of the top-16 seeds garners a big reaction because that means you’ll play in front of your home crowd in the first two rounds.

Finding what region of the bracket you’re slotted in can be exciting because then you know what state you could be headed to for the second week of the tournament (who can forget the cheers from the Huskers when they looked like they’d be going to Hawaii in 2011, only to get upset in the second round?).

The NCAA volleyball tournament will soon be in Omaha. Here are the details — the bracket, the arrivals, the court setup, the hotels, etc.

But because of the new format for the COVID-19 season, all six rounds of the tournament will be played in Omaha from April 14-24. The Huskers earned the No. 5 seed for the tourney as announced on Sunday’s show on ESPNU.

Nebraska has a 14-2 record during the pandemic-shortened season and had a 2-2 record against ranked teams, with losses against fifth-ranked Minnesota and No. 11 Ohio State.

For fans maybe the most interesting thing was seeing what teams the Huskers will have to beat to make a deep run in the tournament. If the top teams advance, Nebraska would face Baylor in the Sweet 16, Texas in the Elite Eight and undefeated Wisconsin in the national semifinals.

After a first-round bye in the reduced 48-team bracket, Nebraska will play the winner of Texas State-Utah Valley in the second round on April 15 at 2:30 p.m.

Six Big Ten teams were chosen — the most of any league — and all six are seeded: No. 1 Wisconsin, No. 3 Minnesota, No. 5 Nebraska, No. 7 Purdue, No. 9 Ohio State and No. 13 Penn State. Nebraska coach John Cook said that was “pretty cool.”

Louisville, coached by former Husker player and coach Dani Busboom Kelly, is the No. 11 seed.

The Huskers didn’t watch the selection show together like normal. After the show, Cook held a news conference via Zoom from his home.

While there wasn’t much suspense for the Huskers, there was for some teams. This year there were 14 fewer at-large teams chosen.

“I think the teams that were on the bubble, probably Penn State was relieved, because they had to have been worried if they were going to get in,” Cook said.

In a normal year, Illinois may have been a good enough team for the NCAA Tournament, but playing only a Big Ten schedule left the Illini with a 7-11 record.

All 25 teams in the coaches poll still got in, either by winning their conference or with an at-large bid, but no unranked teams got an at-large spot in the field.

Cook didn’t complain about Nebraska’s seed and said he thought the selection committee did a good job choosing the seeded teams.

“I don’t worry too much about our seed,” Cook said. “What I’m worried about is we’ve got to play a team that is going to play one day in front of us, and we’re going to go three weeks without having played a match.”

For the Huskers to get the maximum benefits of the tournament being held in Nebraska, they will have to win their first two matches. After that, the tournament shifts from the convention center at the CHI Health Center to the arena, where the general public will be able to attend matches for the first time.

“I think it’s a big deal, even though it won’t be 18,000 (fans),” Cook said. “We’ve talked about this for 1½ years now that there is always a great opportunity when the tournament is in Omaha for us. … It certainly could be a really big boost for us.”

Two of Nebraska's five national titles were won in Omaha.

Nebraska's seed could be better, but during this unique season, we may not know how good teams really are until the later rounds in Omaha.

“We’ve been somewhat battle-tested, but the whole year has been so start and stop,” Cook said. “It’s hard to get momentum. Sometimes in a season you get going and win a few big matches and you got this momentum. We finally started getting that toward the end here, we were playing some good volleyball, and then, ‘Boom,’ (we don’t play) for three weeks.”

The Nebraska volleyball team is introduced before a NCAA regional semifinal match against Hawaii on Dec. 13, 2019, at UW Field House. For the first time in nearly 16 months, the Huskers will be playing postseason volleyball.