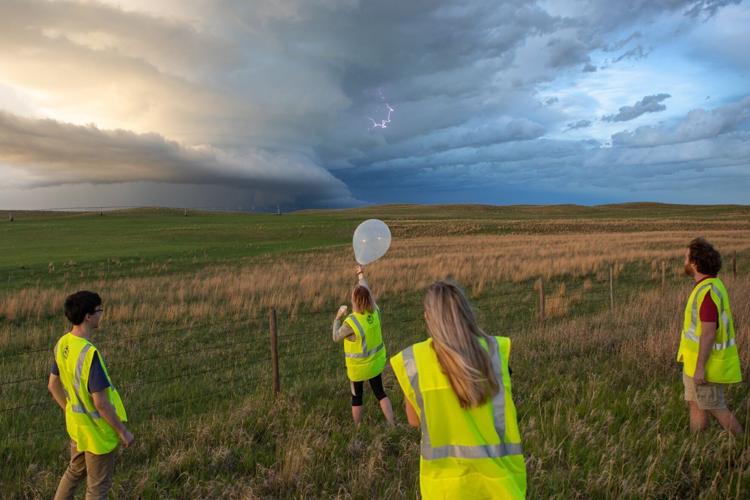 Researchers launch a party-sized balloon equipped with weather sensors into an approaching storm in McPherson County, Nebraska, on June 6. The balloons were launched every 45 seconds. 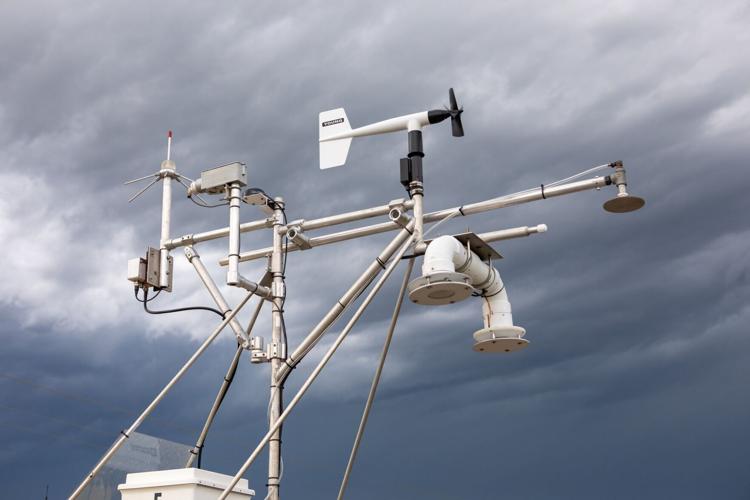 These are among the weather sensors on about eight vehicles that allow scientists to take readings of the atmosphere close to a storm. 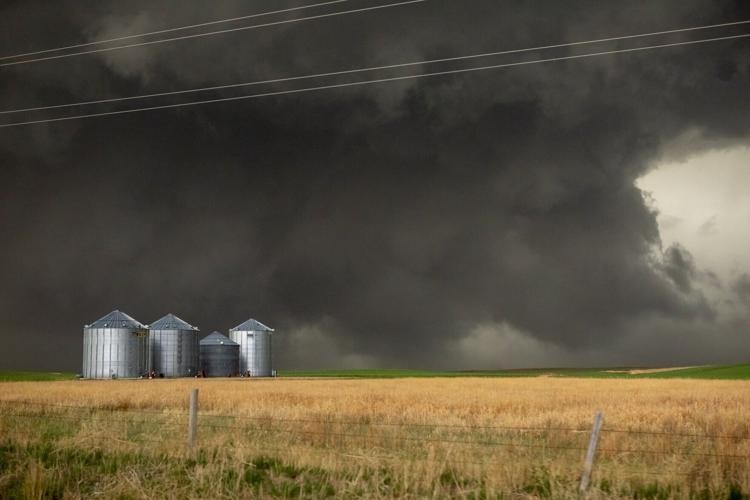 This supercell thunderstorm near Lamar on June 7 was among the Nebraska storms that scientists studied last week. 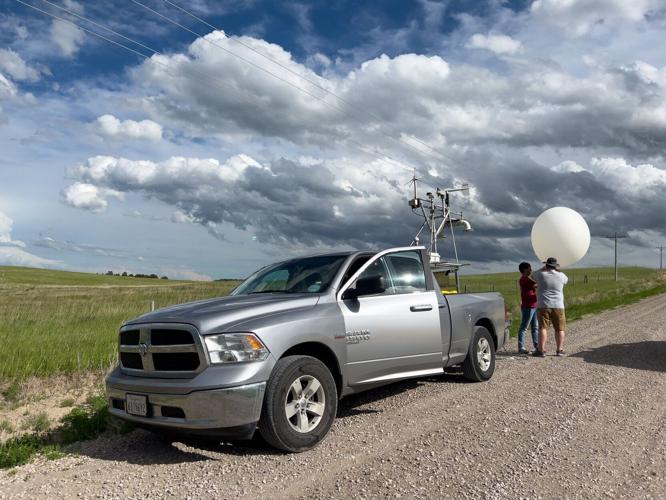 Weather researchers fill a balloon with helium so that they can launch it and its small cargo of weather sensors into an approaching storm system near Gordon, Nebraska on June 6.

OMAHA -- Somewhere in the 100- to 200-square-mile swirling mass of atmosphere that forms a supercell storm are cantankerous streams of air that scientists believe could be the reason a storm spins out a tornado.

Scientists believe what they are seeking could be as "small" as a milelong stream of air in the lowest half-mile of the storm's 10- to 15-mile height — the proverbial needle in a haystack.

Those regions of the storm may be sharply colder or barely colder than the air around it, or may be where the wind shifts abruptly. (Keep in mind that storm systems are chaotic, with winds spinning vertically and horizontally, and temperature and moisture content varying widely.)

Scientists aren't certain why one storm generates a tornado and another doesn't. The only way to find out is to blanket a given storm with as much weather-sensing equipment as possible — a costly, time-consuming effort that involves no small degree of luck.

That has been the catalyst for a $3.2 million federally funded field study led by the University of Nebraska-Lincoln. Dubbed TORUS, for Targeted Observation by Radars and UAS (drones) of Supercells, the study includes about 50 researchers from the federal government and academia.

Their nomadic work takes them wherever the storms are breaking across 367,000 square miles of the Great Plains, from North Dakota to Texas and from Iowa to Wyoming and Colorado.

"The main objective of TORUS is to better understand super cell thunderstorms, the ones that produce the biggest hail, the strongest tornadoes," said Adam Houston, the lead investigator and a professor of atmospheric sciences at UNL. "To better predict tornadoes, we need to understand them. Hopefully, this will lead to forecasts with enough lead time and accuracy that we can protect lives and to some extent property."

The effort utilizes an array of equipment, including eight trucks equipped with weather-sensing equipment, with some deploying radar and others, LIDAR (pulses of light), drones, a NOAA hurricane airplane and weather balloons.

Funding comes from the National Science Foundation and National Oceanic and Atmospheric Administration.

Mike Coniglio, research meteorologist with the NOAA's National Severe Storms Laboratory, said these types of sophisticated field studies are essential to dissecting storms because traditional weather sensors, such as stationary National Weather Service radars, are limited in how often they can take measurements and what they can see.

"The features we are looking for are difficult to observe," he said.

Once scientists learn what triggers a tornado, they will hunt for proxies in the larger environment of the storm that will enable them to make forecasts. Proxies are needed, he said, because meteorologists can't chase and monitor every single storm in such fine detail.

The Great Plains are an ideal place to study tornadoes because the open horizon allows scientists to see at greater distances, which means they are safer while storm chasing. Data gathered from these studies is run through supercomputers for analysis.

Findings from the 2019 field surveys are expected soon, while results from this year's research will be released in a couple of years.

Coniglio said the overall science of understanding storms has moved beyond its infancy, "but we certainly have a lot more detail to learn about what is happening inside these storms."

3 years ago: Tornado in Lincoln leaves heavy damage in its wake

North Lincoln by I-80

North Lincoln by I-80

Cinco de Mayo picture of the storm from the Haymarket

Capitol in the storm

Back porch view right before we got hit out here in west lincoln.

Was outside working on my car, 30 seconds later we’re in a whirlwind of debris. Tons of damage in our neighborhood. Stay safe everyone!@rustywx @NWSOmaha #LNK #newx pic.twitter.com/BhsSpGL6UX

From downtown Lincoln at 5:40 pic.twitter.com/LgyFXqk70e

From a pink sunset in light blue skies to a black wall cloud pic.twitter.com/XoBNalib4q

As a cold front works across the state, showers and storms look likely and some could be severe. The latest on the timing and threats and a look ahead at Saturday and Sunday in our updated forecast.

Watch now: Chance of severe storms Thursday and Friday in Nebraska. Here's everything you need to know

Good chance of rain today and tomorrow in Nebraska and unfortunately a threat of severe storms as well. Get the latest information on the expected timing and threats in our updated forecast.

Listen to Across the Sky podcast; episode10 coming soon!

🎧 Listen now for a discussion on the location of and history behind Tornado Alley.

Watch now: Intense heat for much of Nebraska Monday with a chance of severe storms as well

Feels like temperatures in the low 100s will be common across central and eastern Nebraska this afternoon. As a cold front works in, showers and a few severe storms are expected as well.

Quiet weather expected across the state Wednesday, but a warm front will bring showers and possibly severe storms back for Thursday. See where and when storms are most likely in our latest forecast.

Most will see highs in the 80s today, but the southeastern corner of Nebraska will still reach the low 90s. Off & on showers & storms are expected here as well. Full details in our updated forecast.

Ask the Weather Guys: Did weather forecasting play a role in D-Day?

The success of the Normandy invasion was extraordinarily dependent on weather conditions.

How dangerous is lightning? Here's how to avoid injuries

About 60 Americans die a year from lightning strikes, but 4 to 5 times as many survive, although injuries can be serious. Here's what you need to know.

Fremont folks should be prepared for high temperatures. It looks to reach a balmy 89 degrees. We'll see a low temperature of 64 degrees today.…

The Fremont area can expect a very hot day. Temperatures are projected to be a quite blistering high of 97. Today has the makings of a perfect…

Researchers launch a party-sized balloon equipped with weather sensors into an approaching storm in McPherson County, Nebraska, on June 6. The balloons were launched every 45 seconds.

These are among the weather sensors on about eight vehicles that allow scientists to take readings of the atmosphere close to a storm.

This supercell thunderstorm near Lamar on June 7 was among the Nebraska storms that scientists studied last week.

Weather researchers fill a balloon with helium so that they can launch it and its small cargo of weather sensors into an approaching storm system near Gordon, Nebraska on June 6.