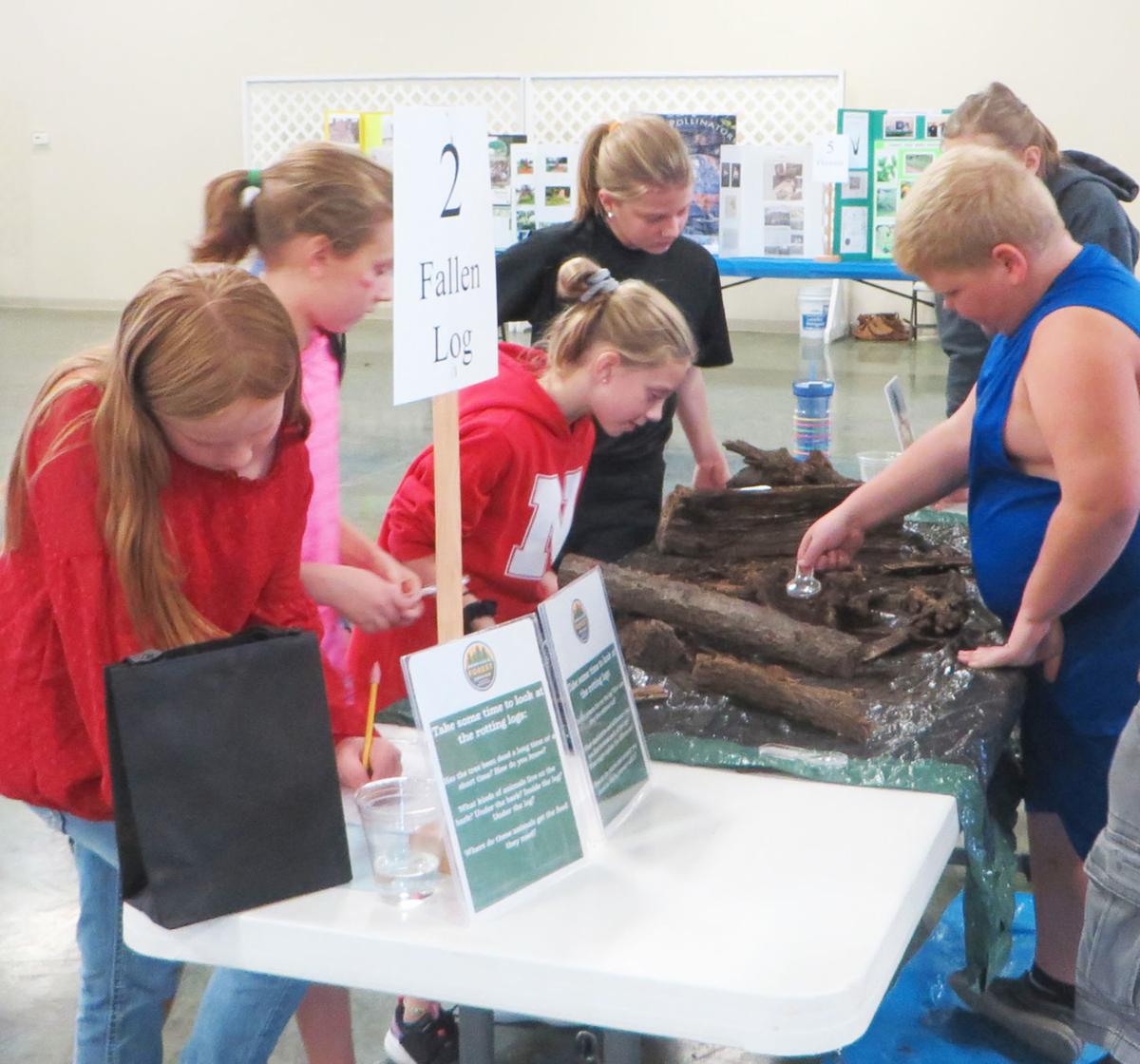 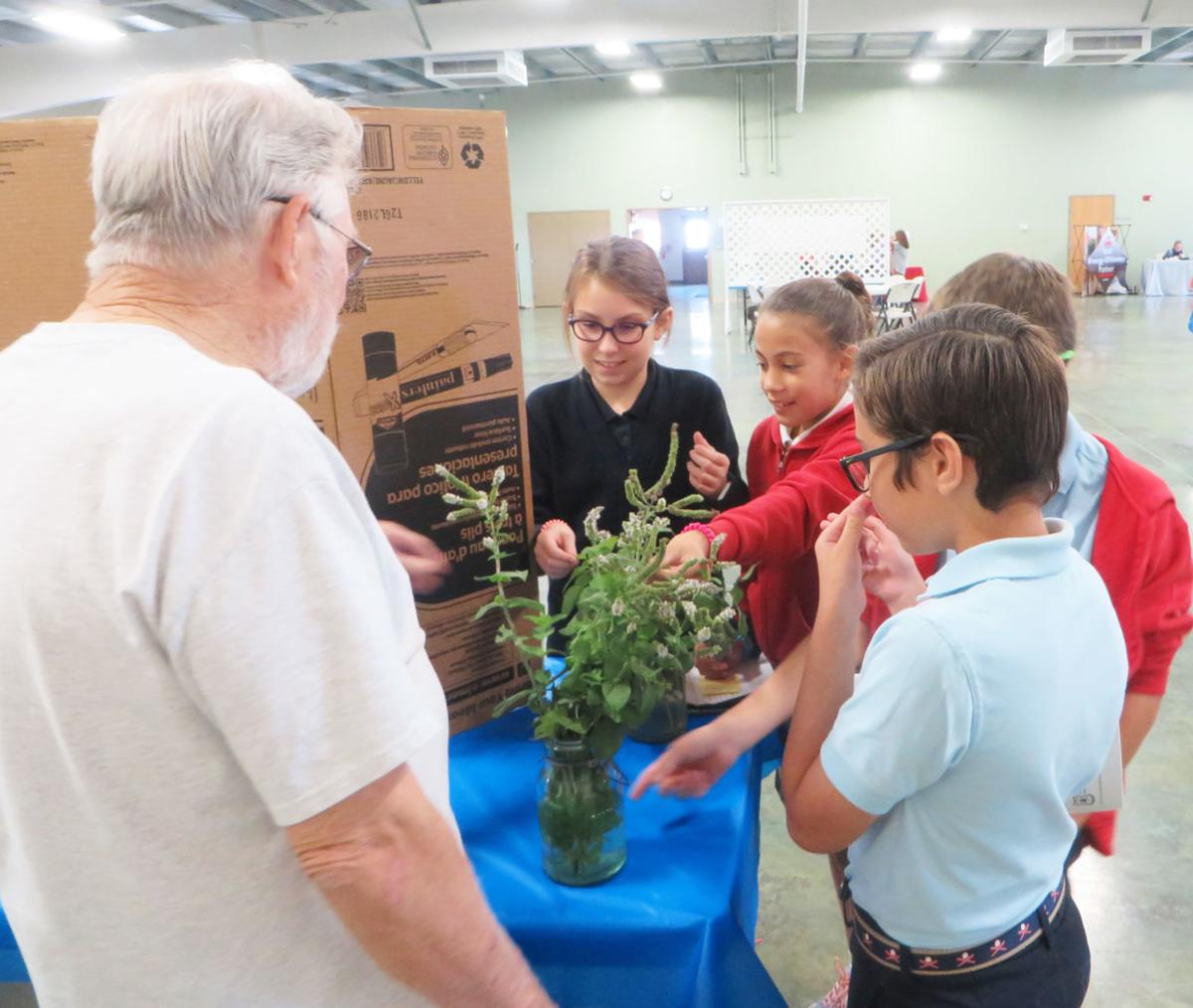 Plattsmouth Garden Club President Jerry Blackwell explains the healthful benefits of herbs at last week's Youth Environmental Fair. Students were able to smell and touch the herbs at the demonstration. 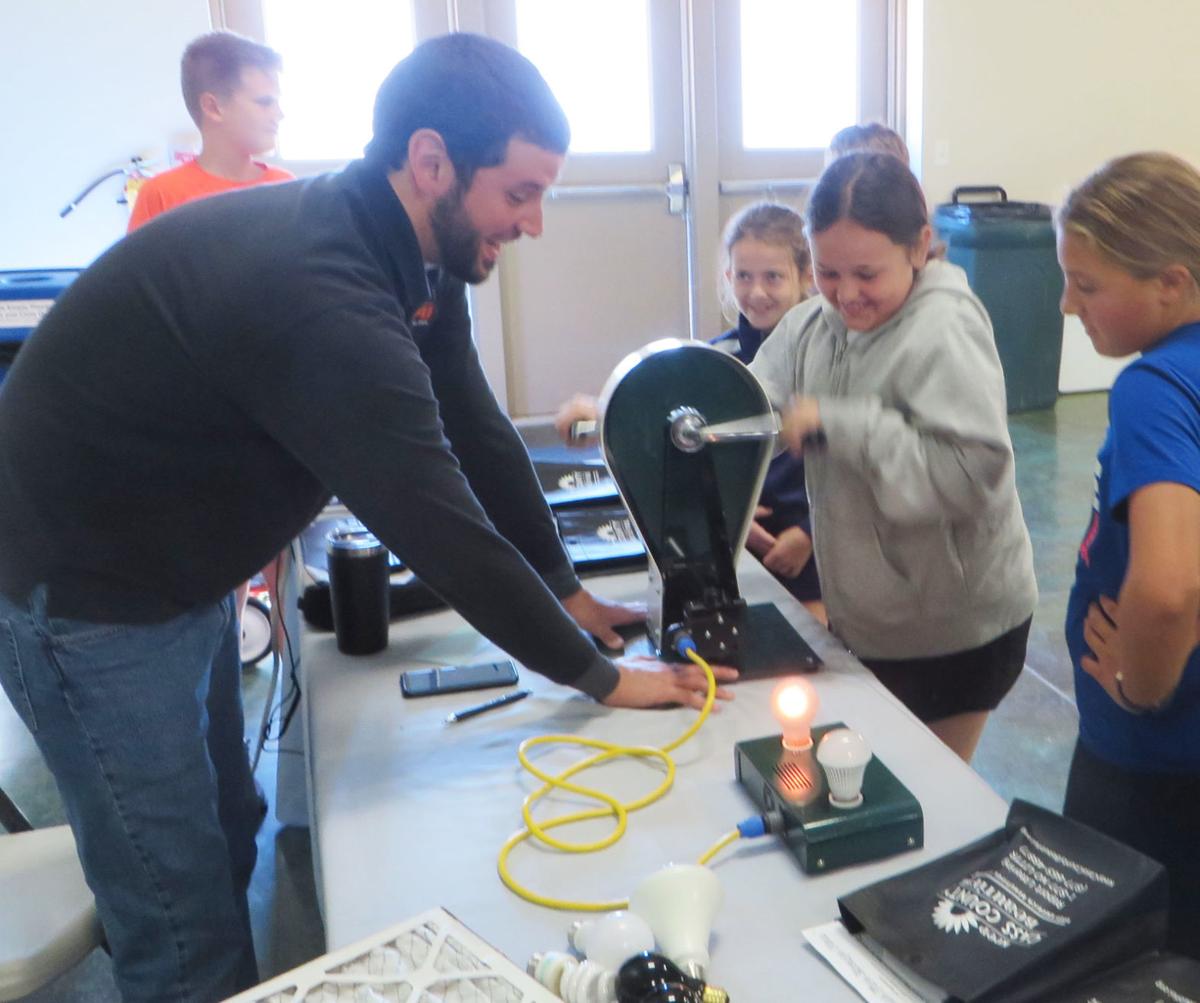 It’s the wasteful disposal of food.

“An alarming 40 percent of the food we grow gets thrown away and most of it is wasted at home and in restaurants,” said Meagan Deichart, President of Keep Nebraska Beautiful.

Linda Behrns, president of Keep Cass County Beautiful, added, “This has come to the forefront as far as waste that we are seeing.”

Reducing food waste was a topic at last week’s annual KCCB Youth Environmental Fair for county fifth graders of which 115 of them took part.

“The purpose of the fair was to help students learn how to take better care of the environment and to make real-world connections with their surroundings,” Behrns said.

Two booths added this year focused on the prevention of food waste and reducing organics in the landfill by composting.

The “Life of an Apple” booth demonstrated where food comes from and what we can do to avoid wasting food.

For example, according to Behrns, when a bruise on an apple is found there’s a tendency to throw all of it or a good portion away. However, people can cut and remove the bruise and make applesauce, juice or cider from the remainder, she said.

Another station, ‘Do the Rot Thing…Compost,’ may have been a play on words, but the meaning was serious. It explained the benefits of composting unused food as an efficient method to enrich lawn or garden soil instead of disposing food waste in landfills where it can create methane gas, a dangerous greenhouse gas, Behrns said.

Students were also taught on preserving leftovers by also placing them in a certain area of the refrigerator and up front, instead of in the back where it can get stuck behind newer food and end up forgotten and spoiled.

The students were even given tags with the wording `Use This First’ to be put on the leftovers at home, Behrns said.

She praised Deichart, the new president of Keep Nebraska Beautiful, for bringing these new booths to the fair.

“She wanted to take a new approach with an emphasis on decreasing food in the landfills,” Behrns said.

Other presentations included home safety, a recycle-sort game, and flowers that benefit the environment, she said.

Students attending the fair came from Elmwood-Murdock, Louisville, Weeping Water and Plattsmouth’s St. John the Baptist schools. The event was made possible by grant funding from the Litter Reduction and Recycling Grant Program of the Nebraska Department of Environment and Energy (NDEE), the Cass County Fair Board, memberships and help from 29 volunteers, according to Behrns.

“It went really well and those who attended had a good time,” she said.

PLATTSMOUTH – A weeks-long search for a missing Buccaneer Bay man has come to a sad ending.

WEEPING WATER – Weeping Water students are showcasing a positive glow this week during Homecoming activities at the school.

PLATTSMOUTH – The annual Cruizin’ Main car show in Plattsmouth has a special place in the hearts of Terry and Annette Roehr of Council Bluffs, Iowa.

SOUTH BEND – Cass County sheriff’s deputies on Wednesday evening tasered a woman to prevent her from harming herself.

PLATTSMOUTH – Plattsmouth’s Living Water Church went the distance in finding its new pastor that included the review of over 80 resumes.

PLATTSMOUTH – Another company providing internet and other services may be coming to Plattsmouth.

LINCOLN – Students from four Cass County schools earned statewide recognition this past week for their sterling reputations and achievements.

Plattsmouth Garden Club President Jerry Blackwell explains the healthful benefits of herbs at last week's Youth Environmental Fair. Students were able to smell and touch the herbs at the demonstration.