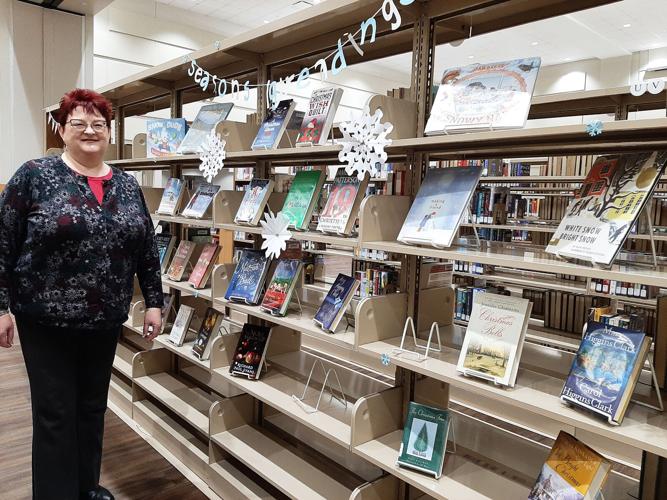 Keene Memorial Library Director Laura England-Biggs stands near a display in Fremont City Auditorium. The attempt to have the book “Sex is a Funny Word” from the Keene Memorial Library raised concerns among city and library officials about the effect of the situation on library fundraising, according to emails obtained by the Fremont Tribune. 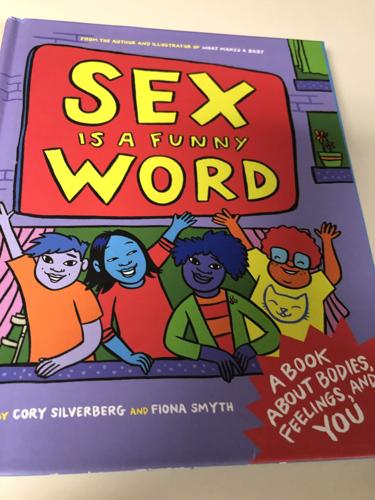 “Sex is a Funny Word,” has been available at the library since 2019, and is a frank approach to sex education and body issues focused on children ages 7- to 10-years-old according to its description on Amazon.com. The book was retained after a decision by Library Director Laura England-Biggs.

Following a contentious series of complaints about sexual education and LGBTQIA-themed books by two mothers Tuesday night at the Fremont City Council meeting, seven sexual education books were moved Wednesday morning from the children’s section of Keene Memorial Library to the adult section.

Keene Memorial Library Director Laura England-Biggs confirmed to the Fremont Tribune the relocation of the seven books that had been on shelves in the children’s section of the library following a visit from Fremont Mayor Joey Spellerberg, City Administrator Jody Sanders and Library Board President Linda McClain.

“The mayor, the city administrator and the library board president came to the library this morning and we moved seven books,” England-Biggs said. “(Spellerberg) did not order us (to relocate the books), it was a mutual decision after discussion.”

The seven books moved from the children’s section to the adult section included only one book that two mothers complained about during the public comment segment of Tuesday night’s city council meeting, “Sex is a Funny Word.”

Local mothers Sandra Murray, owner of Fia and Belle clothing store in downtown Fremont, as well as her own daughter, Brianna Kindler, spoke during Tuesday’s council meeting, decrying five books that they said were able to be checked out from the library and were found in the children’s section.

Aside from the sex education book, “Sex is a Funny Word,” the two mothers also said four LGBTQIA themed books should be not be available in the children’s section and were efforts in their opinions to “groom” children into the LGBT culture.

England-Biggs said the other six books moved on Wednesday were what she referred to as “normal and standard” sex education books aimed at children and teens that are intended to teach them about reproduction, their bodies and changes to bodies and genitalia during puberty.

The six other books moved include: “The Every Body Book,” “Who Has What: All About Girls and Boys Bodies,” “It is So Amazing! A Book About Eggs, Sperm, Birth, Babies and Families,” “The Girls Guide to Growing Up: Choices and Changes in the Tween Years,” “The Boys Guide to Growing Up: Choices and Changes During Puberty,” and a tome titled, “It’s Not the Stork: A Book About Girls, Boys, Babies, Bodies, Families and Friends.”

None of the seven books relocated are out of circulation, but were merely moved to the adult section of the library, England-Biggs stressed. The four other books that the two mothers complained about were not relocated, she added.

England-Biggs said she was surprised the two mothers complained about the books at a city council meeting, rather than filing an official complaint with the library. She also said in her 17 years working at Keene Memorial Library, she’s not been aware of complaints about any sex education book or LGBTQIA-themed book at the library.

“The books in the library are chosen by professional librarians. I leave (book choices) up to the children’s librarian and the adult librarian. (All three of us) have master’s degrees (in library sciences),” England-Biggs added. “I encourage them to choose the books, to be independent. It is their choice. I don’t have the time to choose the books with my other duties as library director.”

England-Biggs said the overriding operating philosophy of all libraries she’s studied in her professional career is to have a wide range of books on thousands of topics and that anything sensitive would be chosen and guided by parents of children.

She also said the library has LTBTQIA reading material and books, noting that it is important to have those topics available for the public who seeks them and as a way to be inclusive to all readers, regardless of sexual identity.

“It is our position that it is a parent’s job to guide their children’s reading habits. Not the librarian’s. As a librarian, I do not choose what is appropriate for a child: that is for the parents to do,” England-Biggs explained. “We want the library to be for everyone, but sometimes not every book is for every person.”

England-Biggs also refuted and denied claims by Murray and Kindler that any of the LGBTQIA-themed books were inappropriate or “grooming.”

“These are important books,” she added.

On Wednesday, Spellerberg spoke to the Fremont Tribune about his visit to the library and quick action on the complaints from Murray and Kindler. He said he had personally looked inside the books in question and had seen the imagery and photographs, but refused to comment on whether or not the content was offensive.

“I wanted to immediately look into this. We are very interested in listening to the public. I wanted to make this a priority right away,” Spellerberg explained of his Wednesday morning actions. “The books were not removed from the library. I think the action we took today … we are being responsive to the public, while understanding these books are not being removed, but are going to be out of the kid’s section.”

Spellerberg said the library is a crucial part of the city’s educational fabric and he was thankful for the leadership of England-Biggs and others from the library board who helped advise him.

As for the fate of the books that Murray and Kindler have in their possession, England-Biggs said the library does not have a late fee or fine system anymore, but if the two women do not return the books after six weeks of being checked out, they will be billed for the cost of the books and an additional $6 processing fee. If the cost of the books is not paid, and exceeds $10, she said the offending parties will have their library cards suspended until the costs are paid.

If any citizen wants to contest a book that is in the library, England-Biggs said they can pick up a complaint form at the library and return it. She said the process involves a 15-business-day review period by herself. After a decision is made, if the complainant objects to the decision, they can appeal that to the library board, which has a 10-business-day response period to decide whether to hear the appeal at a meeting.

Any decisions on keeping or removing books or materials made by the library board are final, she added.

Editor's note: This article has been edited to reflect the nature of this Q&A --- an opinion piece. The Tribune regrets any inconveniences…

The review of the controversial sexual education book “Sex is a Funny Word,” at Keene Memorial Library has been delayed, because the only copy…

Supportive Singles to gather for lunch

Keene Memorial Library Director Laura England-Biggs stands near a display in Fremont City Auditorium. The attempt to have the book “Sex is a Funny Word” from the Keene Memorial Library raised concerns among city and library officials about the effect of the situation on library fundraising, according to emails obtained by the Fremont Tribune.

“Sex is a Funny Word,” has been available at the library since 2019, and is a frank approach to sex education and body issues focused on children ages 7- to 10-years-old according to its description on Amazon.com. The book was retained after a decision by Library Director Laura England-Biggs.